Bruce's life with us was very short-lived. He started very well, was feeding vigorously, was mostly in peace with the tank mates. Then he developed an illness that's characterized in part by so called duck (swollen) lips and died after a couple of months with us in the 1800 gal. Analyzing in retrospect, I am rather sure it was a combination of

-- an unknown pathogen that has been present in our systems since 2018, maybe columnaris (suggested by

duanes )
-- inadequate water change of 100% in 20-30 days, instead of the usual range of 3-7 days
-- Bruce's age of 6 years and him being a short-body, which always negatively impacts health and longevity

(A recent thread by

eyespot on duck lips in cichlids with our input, and Duanes' input: https://www.monsterfishkeepers.com/forums/threads/vicious-strain-of-duck-lips.746139/ ) 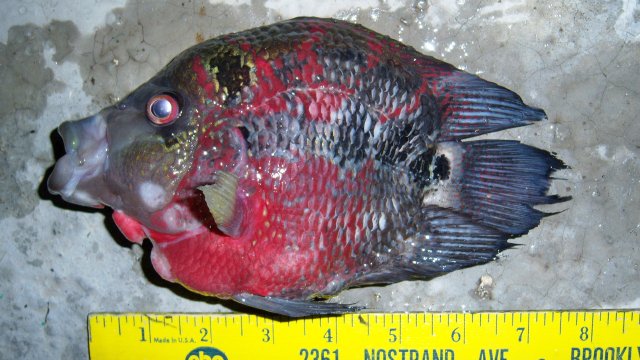 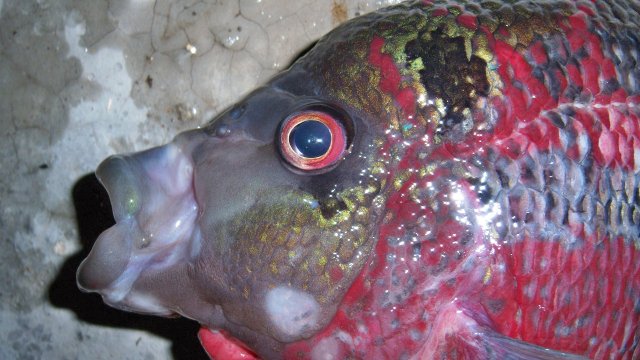 Meanwhile, we were donated another FH by Breezi from North Port, FL, also with an interesting story. It was thought to be a poor quality, damaged, sub par FH at 1"-2" and was sold for $9 by an LFS in Ft. Myers, FL but turned out pretty nice, currently at 12" and 2 yo.

Named Floyd, Breezi says he likes to receive pets and rubs from humans... but kills all his fishy tank mates.

He has been behind a tank divider since he arrived just to see how he does and no, I am not placing him in the water system where Bruce recently passed, so Floyd will be confined to the 240 gal tanks until we get bigger ones on different water systems.

He has done well so far, has been here a month, and now takes large NLS pellets eagerly (took him a week or two) and pays a LOT of attention to Atan the midas and 30 red devils on the other side of the divider.

Hence the reason why my FH all flew solo.
Expand signature
He who dares not offend cannot be honest. - Thomas Paine
Reactions: thebiggerthebetter
J

Wow amazing variety of fish in that 4500 gallon. I wish I could have a tank like that!! Wish you the best with the latest rescue.
Reactions: thebiggerthebetter

Floyd the flowerhorn has largely healed up from the run-in with the fish-of-steel pacu and doing well:

Sounds like it had a full, happy life. RIP.
Expand signature
20+ years in the freshwater & saltwater aquarium hobby. Also had a stint back during my college and grad school days as a professional fish breeder & coral propagator. I work as an engineer & scientist to fund this hobby, so the more technical you get the more I will geek out over your posts.
I'm on MFK to share my knowledge/experience/enthusiasm and to learn more from other avid aquarists.