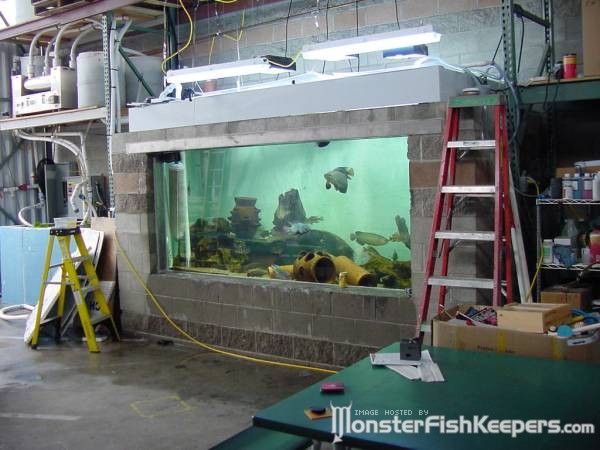 Permission to use on www.monsterfishkeepers.com

My first tank was a 10 gallon tank ( 1963), from I believe Aquarium Stock Co. in Los Angeles..when I was about 14, I built a 70 gallon plywood and fiberglass tank with a 3/8 glass front window..it housed my first Oscar, jack dempsey and an albino clarias catfish. . 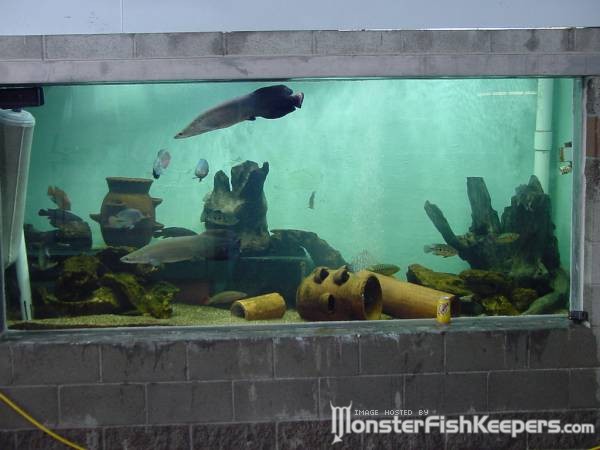 Why I decided to build this tank its not really my fault..my 14 year old son thought it would be a good idea. The concept started as another plywood and fiberglass tankwe were thinking of a 48x48x96 tank which would be about 1000 gallons.but after a lot of thought, I decided it would be easier and safer to build a tank of concrete block. It turned out that the price for the 2 inch thick cell cast acrylic was based on the price for a full sheet so we optimized what we could build with a full sheet ( nominal 120x72 ).


The tank is located under a large shed roof in Los Angeles. It is built on top of a concrete slab that is capable of supporting a 300 pound per square foot load (approx 30,000 pound total). 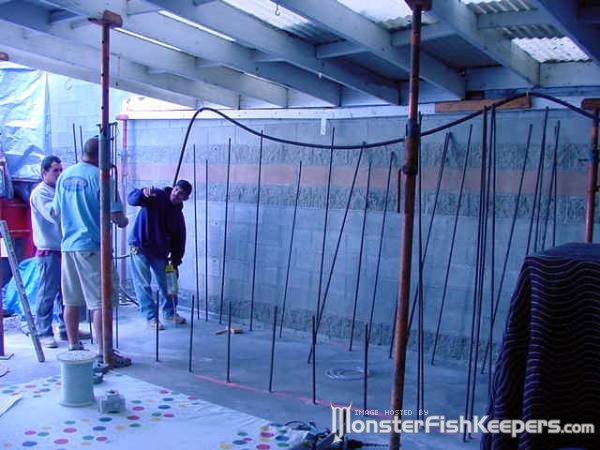 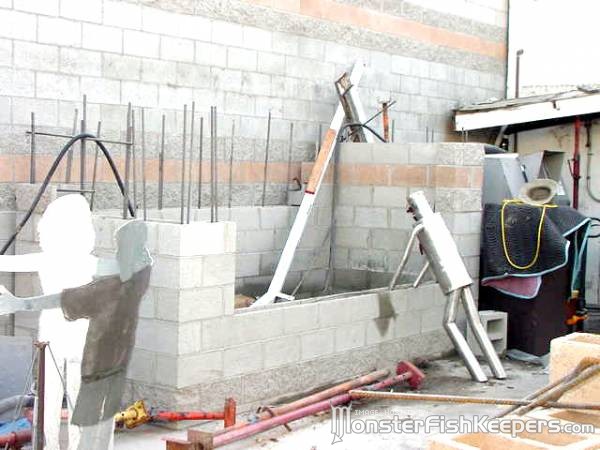 The tank construction began by building the concrete block box. It has rebar drilled and anchor both into the slab and the concrete building in back of it. Vertical and horizontal rebar was used as internal reinforcement including 90-degree loops at all corners. At the top of the window opening, a 316 stainless steel beam was installed to support both the weight of the top row of block as well as the outward load from the water pressure. 316 stainless steel was chosen if I ever wanted to convert to saltwater at a later date. Once the basic box was completed all the void spaces were filled with concrete. The inside of the window opening was finished with 4x4x.5 316 stainless angle providing a flat surface to seal the acrylic to. Once dried, the interior was sealed with epoxy resin then fiberglass cloth and epoxy resin and finally covered with a blue tinted coat of epoxy. I contacted West System for instructions on epoxy that was suitable for drinking water storage tanks, as many epoxies are toxic. 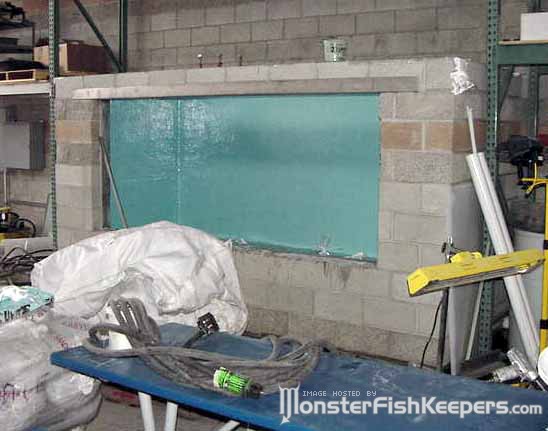 The next project was to install the 600-pound sheet of 2 thick cell cast acrylic. A 10 foot steel beam was fitted to our forklift. The acrylic was suspended with nylon webbing and lowered into place for a test fit. Wooden braces were made up to hold the acrylic under pressure once the sealant was applied. After contacting several large producers of silicone sealants all of who would not discuss this type of application due to liability issues. One finally gave me information on a similar application with the understanding that I would never apply this info to a large aquarium. The final choice was a two-step process of applying a primer and then the silicone sealant. However, if ever faced with this problem again I would use a catalyzed silicone rather than a rtv type to avoid long cure times. With a couple of helpers we applied about 26 cartridges of sealant, tipped the plastic into place and applied pressure with the wooden braces. After two weeks to cure the braces were removed and the top cross brace was pre tensioned in anticipation of the load from the water.

While the silicone was curing the filter and plumbing was started.

Four 3 inch diameter overflows exit the end of the tank. They run to the far end of the filter box. Two pick up water at the surface and two run down to the bottom of the tank (with large anti siphon holes) supplying water by gravity.

Both the sump box and filter box were welded together from ½  polypropylene sheet. The filter box contains a number of vertical filter panels running from coarse to med fine. The water exits the filter box into the sump. Three 4000-watt heaters with independent controls keep the temperature steady. From the sump box with an independent pump, pumps water up to a 55 gallon barrel filled with bio bale and bio balls. Once full, it automatically siphons back to the sump, exposing the bio media to air as it refills. Water is also pumped thru a canister holding 7 pounds of charcoal and returned to the sump. The main filter water flow exits the bottom of the sump to one of two ¾ hp 3 phase mag drive march pumps ( 55 gpm). The water is pumped up to the UV sterilizer and then the water drops thru two (parallel) 40-gallon barrels filled with bio balls for degassing and bio filtration. The water is then returned by gravity to the display tank. In addition there is a bag filter running at 4000 gph used part time to polish the water to about 50 microns. Once the silicone cured

The tank was loaded with 2400 pounds of gravel, 600 pounds of lace rock and some assorted décor items. Water was added and in several days it was clear enough to see through. I jump started the tank cycle by adding ammonium chloride to 3ppm and adding bacteria to eat it ( no uv) and form the bio filter.

I built up a control panel to handle electrical functions. It provides a place to house the power relays for the pumps and heaters, temperature controls, timers for pumps and UV. Each pumps runs for a 48-hour shift while the UV runs 6 hours on 6 hours off. It also has an integrated alarm for low water, which sounds a bell and shuts down the heaters and 3 phase pumps. On the outside of the control panel are pilot lights, which indicated what is on and what isnt as well as the alarm silence switch.

Maintenance:
Currently the tank is running at about 25 ppm nitrate changing out 150 gallons of water a day. Filters are washed every two weeks with a pressure washer and charcoal is changed at about 6 week intervals. Gravel is either vacuumed or stirred regularly. My son with a mask and snorkel handles detailed maintenance in the tank. Feeding is primarily an assortment of dry foods with some frozen fish added in. I presoak the pellets with zoe, zoecon and tank water for about 10 minutes. This boosts the nutrition and softens them prior to feeding. The fish seem to prefer pellets such as bio gold presoaked. I had been feeding some gold fish but given the risks and the fact that the fish would eat about 50 at a time, the dry food seems more sane but not as much fun.

The King and Queen of the tank are a pair of Arapaima gigas currently approx 26 inches and growing quickly. Also there is a jardini arowana (Scleropages jardini), two black belts (Vieja maculicauda) , a pair of jaguars (Parachromis managuense), a pair of Parachromis motaguense with 4 smaller ones, 4 Vieja synspilus , 3 orange pikes( Crenicichla sp. Xingu) , a Parachromis motaguense 'red tiger' , 4 plecos, a channel cat, a peruno cat, 4 Petenia splendida . Living in the filter and sump are a SA lungfish (hand fed and very cute), an electric catfish and a flower horn. 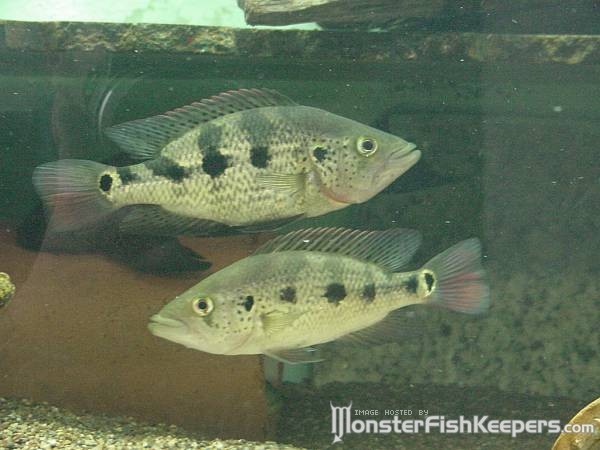 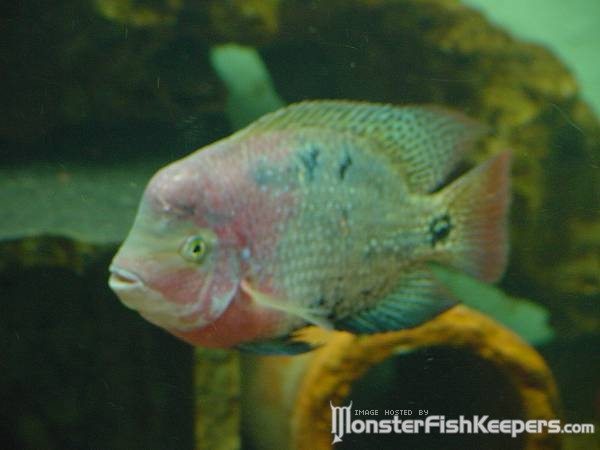 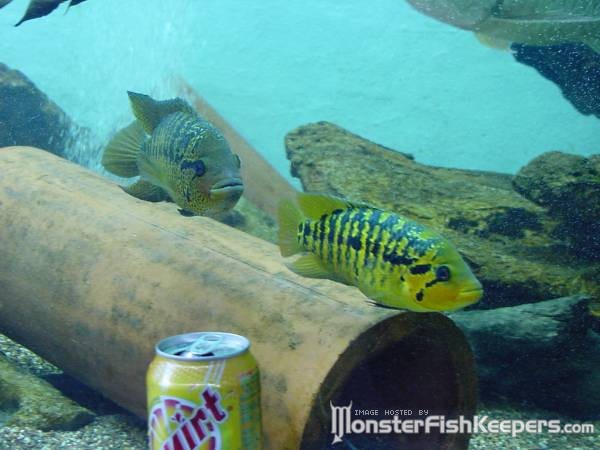 
The tank is viewable through its tank cam located on our website www.ptcmetrology.com . Follow the link and use the web supplied username and password ( ilovefish, ptcptc) . Currently the camera only supports Microsoft IE browser.

Is the webcam located on the bottom or something like that, because I have been watching the cam for about 20-30 minutes now and I havent seen anything that looks like a arapaima gigias ,except a little jard. arow.

PhullTank57;578503; said:
Soon afterwards, came a new breed of fish hobbyists... "Maniac Fish KiLLectors"... they were. Addicted to Big Fish and Big Tanks! They were known to go thru extreme measures just to acquire a new rare fish. Wanting to take the hobby to the NEXT level, they broke away from the so-called "inner circle of experts" and began their own elite Empire. They were FEARLESS and INDOMITABLE. In just a short period of time, they quickly became the Fastest Growing Online Community Dedicated to Rare, Exotic, Predatory Fish... We Are... MONSTER FISH KEEPERS!!

Expand signature
I caught you a delicious bass

an iguana's tail can fall off, it's a defence mechanism!
i read it in a magazine!

you've just moved up a knotch in my book!
your now at knotch number 1

Very nice, my dream tank!!
Expand signature
This space is for rent​
S

Awsome Tank! Someday maybe I'll have the ambition to do something that extreme, but for now I have enough on my plate making a 110 gallon. That thing is awsome though. Do you have any good pics of your pikes? I have a red pike, no where near the size of yours I'm sure, but I find them absolutly facinating.

I love the tank, I followed the sites and put in the password, but nothing comes up. I've been trying to see it for half an hour, and I can't get anything to come up. Do you know why? I'd REALLY like to be able to see everything in motion. I'll try it again some other time, but if you know what's up, let me know, thanks.
M

Save a cow eat a vegetarian
F

" id rather be a goldfish "