Or, where the admin disappeared to lol

First and foremost, I want to thank the rest of the MFK team for keeping the site on the rails while I've been away. You guys rock, I appreciate you so much!

So, as those of you know have been following my Facebook page know, I've been working to build a new house. It has long been a goal of mine to have a ginormous tank like so many of my fellow MFKers, but the main problem I've had is that I simply had nowhere to put one. For a while when I was in the Army and it seemed as though I was going to spend the rest of my life stationed in MIssouri, I succeeded in building a 510 gallon tank that was never fully put into operation. Shortly after I ETSed from the service, I was gifted a 365 gallon by

Oddball . I never succeeded in setting up this tank due to the simple fact that my post-army life was, uh, turbulent to put it mildly. I've had big tanks before, but for one reason or another, I never managed to get them up and running. That's always been a fairly major source of consternation for me. Wanting to get past that hurdle, I took it on myself to design my new house around a tank! Unfortunately, the process of building this house, which became really involved in February, has taken a lot of my attention. Combine that with the fact that I'm working every last shred of overtime I can find in order to pay for new furniture and stuff, and I've had to step back from the forum for a bit.

But still, here we are! We just crossed the 90% point in the construction of a custom home on eight acres.... a custom home that was built around the idea of having a huge fish tank in it.

Now, since this is a brand new custom tank going into a brand new custom home, I tried to do it correctly from the get-go. The house has a stemwall foundation with overly stout footings, and a 12" thick slab. The tank was designed to have a roughly 8x3 footprint, so the perimiter of the tank under the slab had and extra stemwall rectangle under it to better reinforce the weight of this monster.

For the past eight months, the process of construction has gone smoothly (minus rain delays). Since building a house tends to take a long time, I told Beth that my tank could go on the backburner as I wouldn't be ready to take delivery for quite some time.

That time was the Friday before last.

A problem arose however because the shipping terminal in my city to whom Glass Cages sends their tanks wasn't really equipped to hadle a tank of this immensity. The shop manager told me "I didn't realize fish tanks could be this big!" lol. On top of that, some derp at the terminal evidently couldn't read the "fragile" stickers all over the box, and was whipping around with it like it was a pallet of mayonaise or something. This resulted in him wrecking the pallet. Fortunately, the tank was fine, even if the pallet was toast. 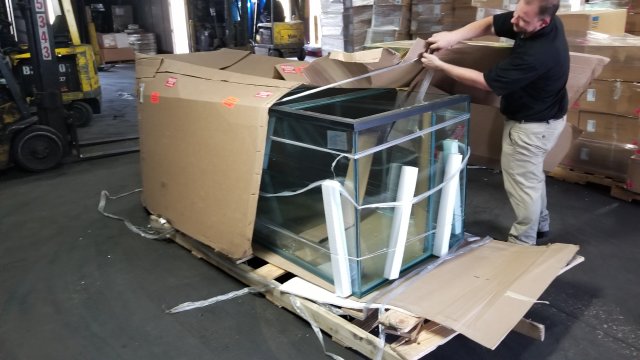 This resulted in compounding the problem I had of "just how in the hell do I get this thing home?!"

The plan I came up with was to build a new thing upon which the tank could sit. The plan was to construct a Tank Plank™.

The concept behind a Tank Plank™ was to make something that had the same footprint as the fish tank, but which was on wheels. This would allow me to move it without having to worry about lifting the damn thing. 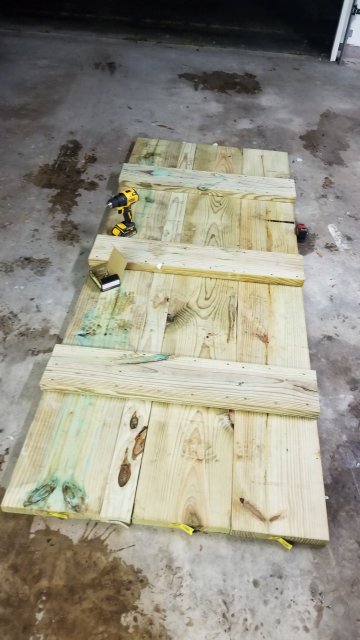 After having attached the braces on the bottom, I flipped the whole thing over and added a piece of cheap plywood to the top, also attached with deck screws. 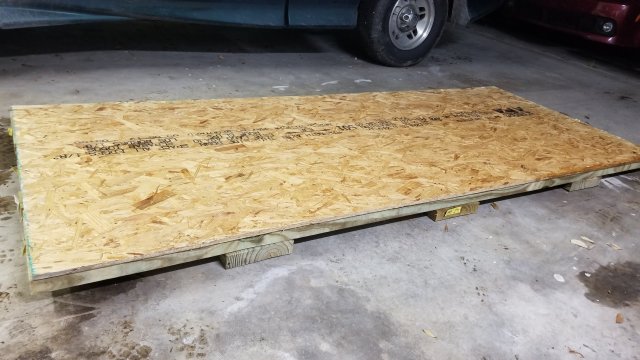 After attaching the plywood, I flipped this heavy thing back over and attached the casters that would allow it to be moved. I found some 5" braking casters at Home Depot that were rated at 350 pounds each. I attached each caster with four 5/16" lags that were 2.5" long each. 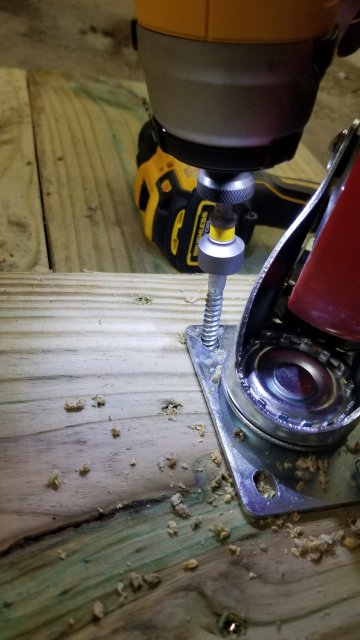 I attached the casters at 21" from the front and rear edges of the Tank Plank™, and with the outer edge of each wheel being 23.5". The reason for these measurements will become obvious later. 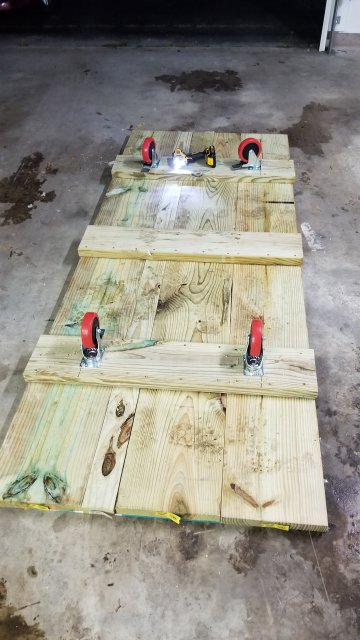 The main deck of the Tank Plank™ sits 8.25" off of the ground, an intentional decision, the reason for which will become self evident later as well. This monster ended up weighing 250 pounds by itself! I was fine with that however, as I wasn't willing to take chances with the tank. 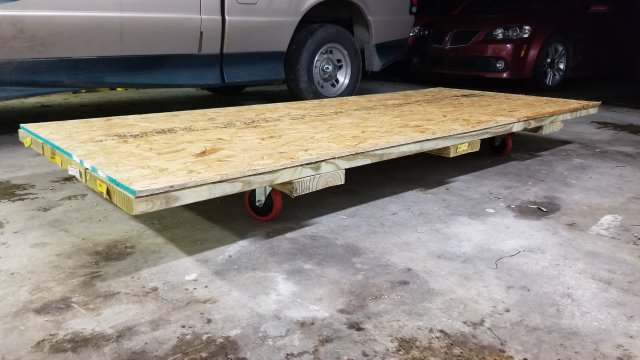 After the Tank Plank™ was done, I rented a Uhaul and trucked my way out to the terminal. Upon arriving, I unloaded the Tank Plank™ and brought it inside, whereupon we proceeded to finagle things to attempt to get the tank off of the shattered pallet. 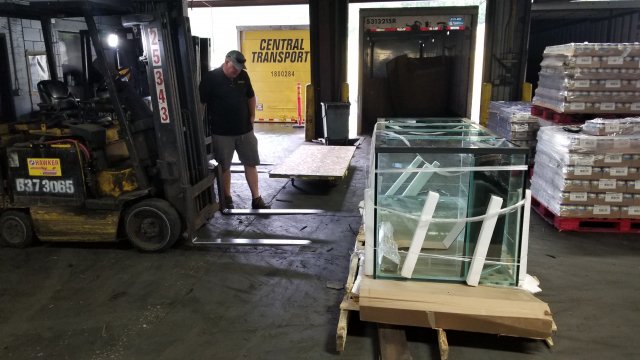 It took a LOT of careful work, but we eventually succeeded in getting the tank off of the busted pallet. We had to go in between the planks of the pallet and under some cardboard to get the forks under the tank. This was one of the two points in getting this thing home that had my nerves the most on edge. 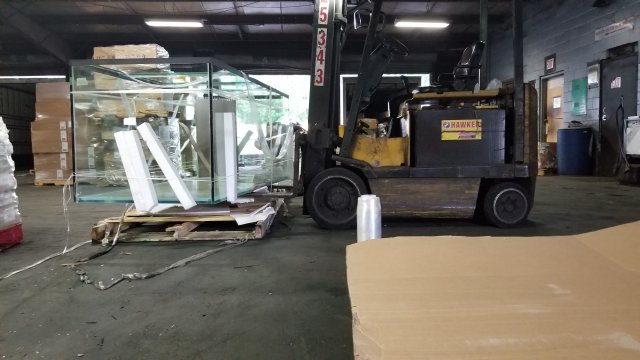 After the tank was up, we tried to place the tank onto the Tank Plank™. This proved to be somewhat tricky however, as gravity was firmly holding the tank to the forks, even with cardboard on either side of the fork to help facilitate sliding the forks out. 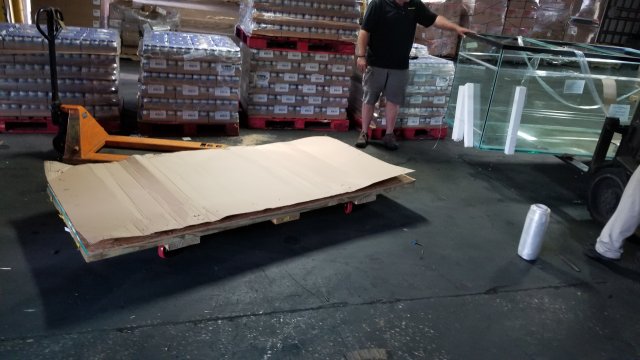 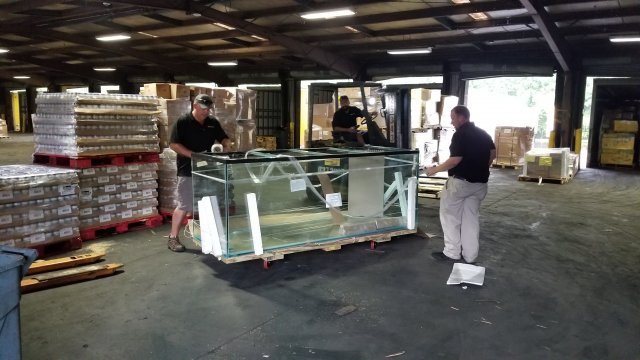 Once the tank was on the Tank Plank™, the warehouse guys wrapped it up, and I secured it with ratchet straps. 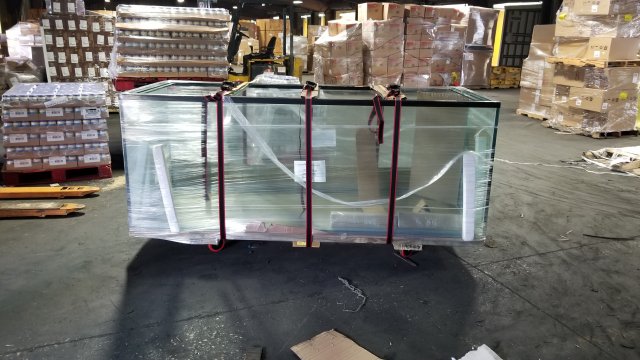 By far and away the most nervewracking part for me was when we had to lower the tank down off of the shipping dock in order to move it to the Uhaul. 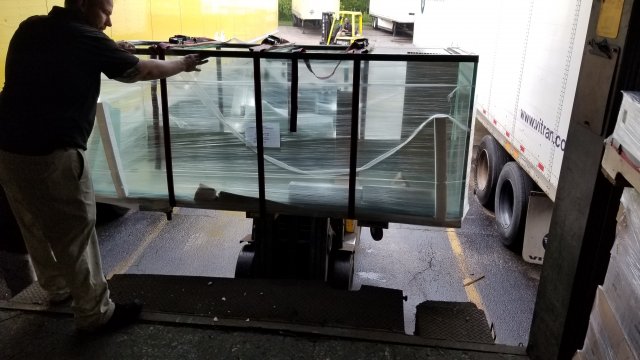 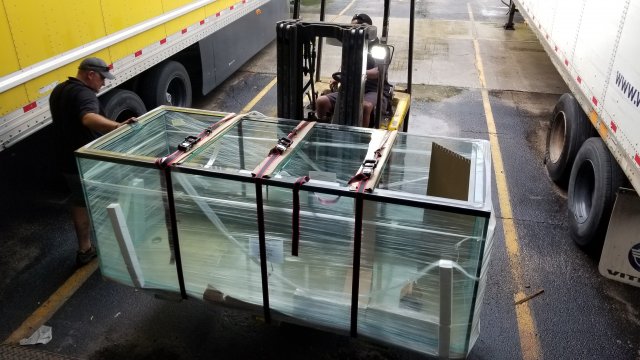 At the Uhaul, I had to have two forklifts in order to get the tank into the truck. One forklift held the ramp nice and level, and the other forklift set the tank onto the ramp. Uhaul truck ramps are 24" wide, which is why I set the wheels at 23.5" wide. The ramp acted almost like railroad tracks for the Tank Plank™, it couldn't move or wiggle in any way. 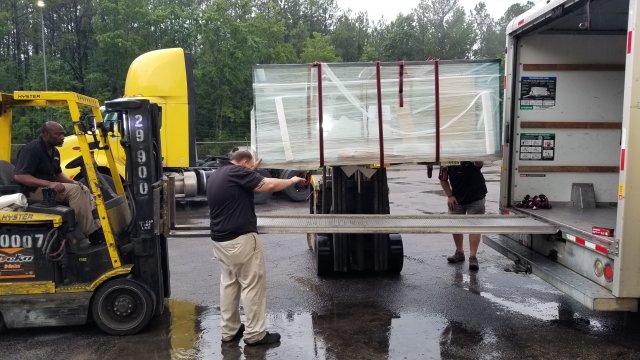 The tank rolled in as easy as you please, and was strapped in place for the trip. 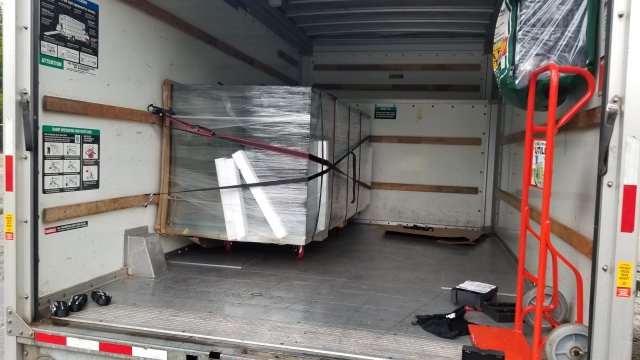 Upon arriving at the construction site, I was met by my wife and a bunch of my fellow redneck nerd buddies (the deep south results in really strange demographics lol). We stood around BS'ing for a while, and then we proceeded to try to remove the tank from the truck. Lining up the wheels... 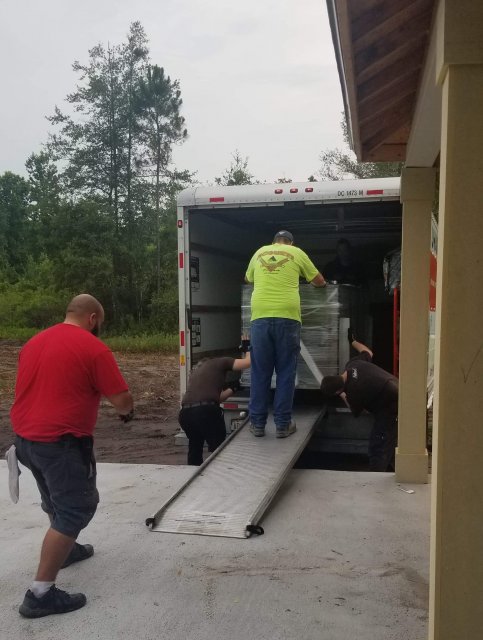 Starting down the ramp 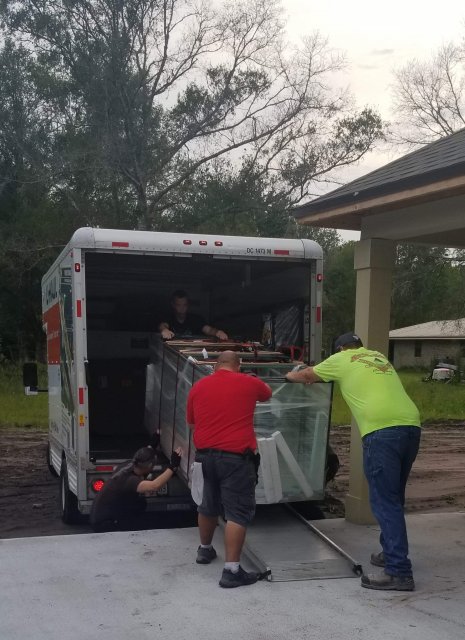 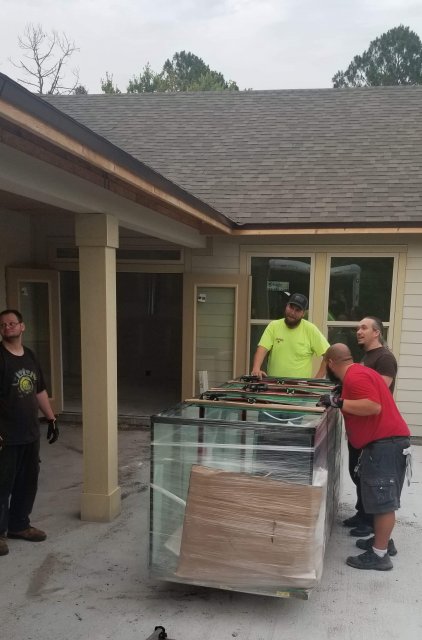 Lining up to enter the kitchen through the French doors 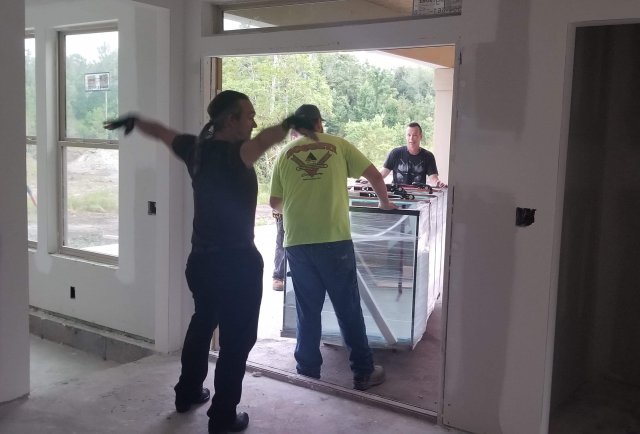 This is the reason the deck of the Tank Plank™ was designed to be 8.25" high. It clears the threshold! 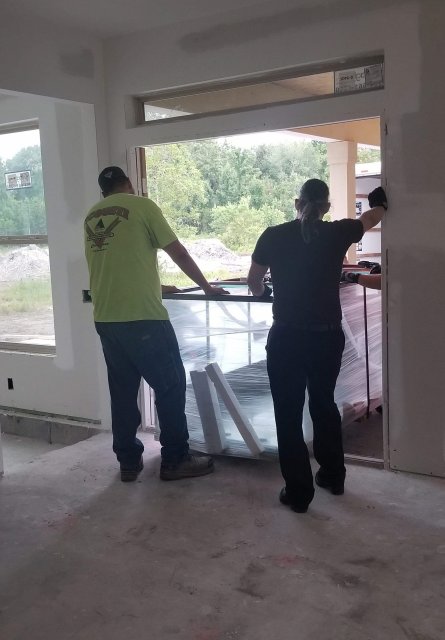 With the bottom of the Tank Plank™ clearing the threshold, I jacked up the front of the tank so we could roll it over the lip 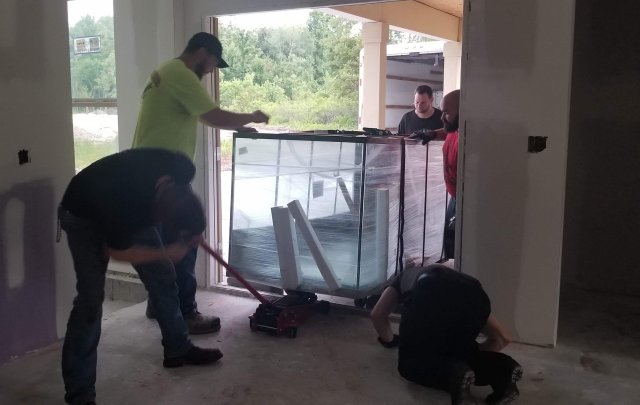 Once the wheels were in the house, I jacked up the back of the tank and rolled it forward until the back wheels were over the lip. This is why the wheels were placed 21" back from the edge, so the jack would have an overhang upon which it could lift. 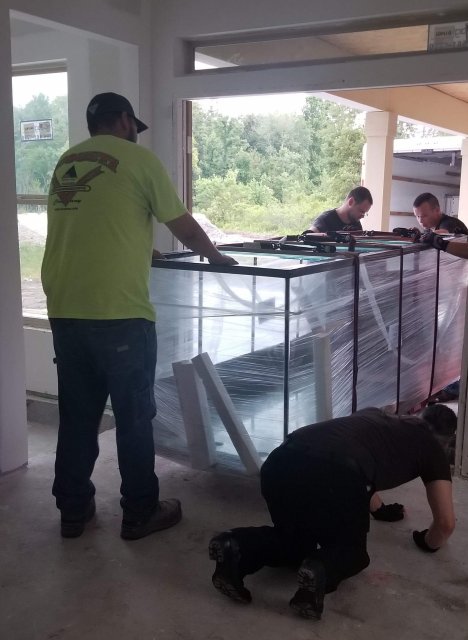 Lining up to go to the family room. This room is sunken 8". 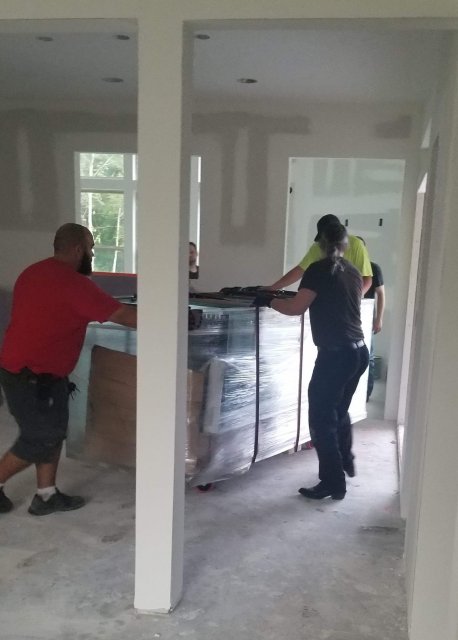 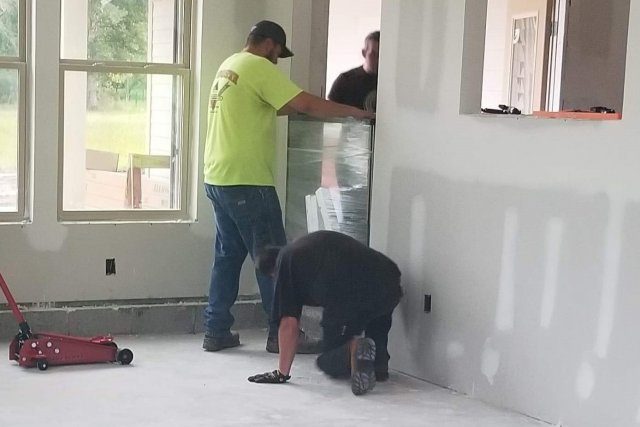 The front of the tank jacked up, with the entire thing rolled in until the back wheels are ready to come down.

Lowering the front down. We had to drop it onto a cinder block then jack it from the side because the angle was too steep, and I couldn't get the Tank Plank™ off of the jack when I had it from the front. 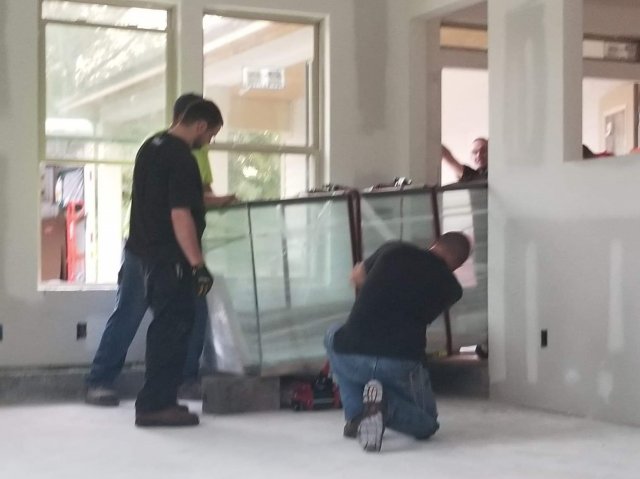 Getting the jack positioned to allow the back wheels to come down into the family room in a controlled manner. This one was tough because the jack couldn't be positioned quite right to slide directly backwards.

The tank positioned roughly where it will be when finished, with my young fish nerd apprentice

There will of course be many updates in the future! Hopefully at some point in the next two weeks I'll have it on the stand
Never Trust a Catfish ​
Reactions: dr exum, Fat Homer, Stanzzzz7 and 30 others

Awesome! Can't wait to see what you stock it with
<3 Fish

Man, that was a nerve wracking read, glad it all went well.
Good luck getting that thing onto the stand, already wondering how you will do that.
Reactions: islandguy11 and Matteus

Good stuff, awesome to see your dream finally being realised!! You've given me some good ideas or moving out my 500g tank too.
Is it too early to ask what you're planning to stock it with?
David R's old 2000L tank:
https://www.monsterfishkeepers.com/forums/threads/david-rs-2000l-tank-build.536815/
Current: 800L Loach Hotel.
Reactions: tlindsey

Wow. That was exciting to read. I’m stoked to see you back and even more stoked to hear about this. I was just thinking the other day, wondering what the progress was on your new place and this tank. It will be great to have it set up, and yes you will get this one running Sir.

Also I see a tm logo next to tank plank- is this a new product coming out via mfkrs. Lol

So nice to see this coming to fruition, and great documentation. And 4 guys -- that's pretty impressive: it took 6 Thai guys to move my little 325's from truck to house and onto stands (using a rolling stand and those big suction cups thingies) -- will be interesting to see how you accomplish this with your behemoth!

Hurry up please, this is worse than waiting for a new episode of GOT
Reactions: Matteus, Stephen St.Clair and tlindsey

Normally I can't stay with "build it" threads. This was a big exception. It reads like a cliff hanger novel. Nice pics along the way too. I'm eager to see the hardscaping; so much potential, and the filtration. Pretty house & dream setup.
Reactions: Matteus and tlindsey
You must log in or register to reply here.
Share:
Facebook Twitter Reddit Pinterest Tumblr WhatsApp Email Link
Top Bottom