As others have already explained to you, sans provenance, your fish is a midevil.
Expand signature
He who dares not offend cannot be honest. - Thomas Paine

Recent article by willem debating if a Labiatus and a citrinellus are in fact the same species. Dna testing shows there is almost no difference between them. Again the example of Herichthys minckleyi having three variations under the one species was brought up in the following debate.
Extract from that article.

" Following the phylogenetic species concept (Kullander, 1999) I tried to find a genetic basis for their separation. I couldn't find it. According to Axel Meyer these species are "extremely similar genetically". Morphology doesn't help much because Midas cichlids are notoriously variable."

In the future could we see the two species amalgamated similar to v synspilum and V melanura.

Do you happen to have a link to that article, Dan? From what I recall reading in the past, while similar, the genetic make up is different.
Expand signature
He who dares not offend cannot be honest. - Thomas Paine

BTW - Willem Heijns has been barking up this tree for a long time. From post #17 in this discussion. https://www.cichlidae.com/forum/viewtopic.php?p=37303

Juan Artigas had what I think was a more sensible approach.
Expand signature
He who dares not offend cannot be honest. - Thomas Paine

RD. said:
BTW - Willem Heijns has been barking up this tree for a long time. From post #17 in this discussion. https://www.cichlidae.com/forum/viewtopic.php?p=37303

Juan Artigas had what I think was a more sensible approach.
Click to expand...

He has put out a few extracts from his fourth coming article which is in the next Buntbarsche Bulletin I believe.
While I like alot of willems work, some of his views are questionable at times. Certainly the example you provided is, he was breeding hybrids and the variations he was talking about are in colour not body shape as such. Which makes me question his statement in this article that morphology cannot be used because a citrinellus is too variable. With so many possible new species to be described seems a bit premature. I would also add that p dovii from different catch locations I would consider hybrids, even if they are the same dna wise I think you would loose traits that have built up in separate breeding colonys.
But looking at some of the phylogenetic trees, the relationship between labiatus and citrinellus from L nicaragua seem quite complex.

I don't know if you have read this one. The summary on page 16 throws up some interesting questions.
https://www.google.co.uk/url?sa=t&s...FjAAegQIBhAB&usg=AOvVaw0c6plzXYcPq8KUpsBhwPBs

Thanks, I think I have read that paper, but honestly it's all a blur at this point. lol But yes, they offer up some of the same questions as others over the past decade.

Having said that, a lot of this boils down to if one is a splitter, or clumper. Personally I have never felt comfortable in crossing fish from different geographical locations, and was taken a bit back when I first read Willem's comment in that link above that I posted. IMO the fry from such a breeding would be pure, domestic/aquarium strain A. labiatus.

I can only think of a few different reasons for crossing geographical variants of the same species. One being that is all one has to work with, so it is done out of desperation to breed two fish of the same species. I would assume that was Willem's case. Another is in the belief that the breeder would be creating something "new & exciting", as in some of the umbee breedings that took place here by members years ago. My warnings in those past discussions fell on deaf ears, and many took my comments as an insult. The final reason I can think of is just pure ignorance, and not caring about the long term outcome of the species.

Otherwise, it simply makes no sense to me.

"2. Is it acceptable to keep and breed cichlids from two different localities? Even if they are the same species? I cannot think of any objections. Of course, you should mention the localities the parents came from. But that information is useless once you get to the second generation. That is when you have created an aquarium strain. Is there anything wrong with that?"

I personally find his comment above, shocking, considering his background, and "expertise" in cichlids from this part of the world. There's plenty wrong with what he describes, maybe he should read some of the papers/studies posted in this topic. Whoa ......
Expand signature
He who dares not offend cannot be honest. - Thomas Paine
Reactions: dan518

It's certainly a surprising point of view from someone with his status in the hobby.

For anyone that's interested a few extracts from the paper I linked
Talking about Lake Apoyeque where there is a normal midas and a fleshy lipped type
"or if there is a genetic predisposition of the proto‐Amphilophus
citrinellus stock to evolve the expression of fleshy lips under certain environmental conditions."

Talking about a citrinellus and a Labiatus from lake nicaragua, which although bigger and older then the crater lakes seemingly has less genetic diversity.


" Neither all individuals
identified a priori as A. citrinellus nor as A. labiatus clustered according to their species assignment or
geographic origin of individuals (Fig. 3). This supports previous findings (e.g. Barluenga & Meyer
2004) demonstrating only weak genetic differentiation between the two species as reflected by
multiple shared mtDNA haplotypes."
Reactions: HybridFinatic

There has been more genetic work done on the Amphilophus genus from this part of the world, than any other group of cichlids on the planet.
Expand signature
He who dares not offend cannot be honest. - Thomas Paine

..... Any updates? i as I understand it currently the midas complex is still at 13 species..... and has continued genetic research research discovered more or less differentiation between A Citrinellus and A Labiatus?..... with the two species compared to themselves and to each others between the great and crater lakes....... 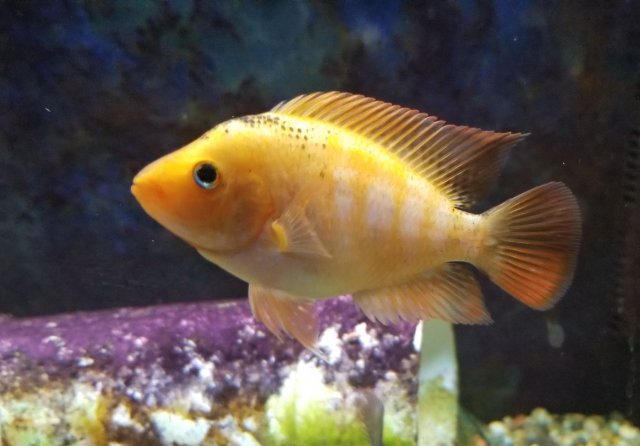