Our true ARTC came from Rouben R rmkblades in March 2016 at about 14". In Rouben's hands it presented no problem at feeding, even took down some tank mate cichlids. In my hands, it's a totally different story. I've been struggling greatly to feed it. It refuses the meals ~ half the time and only eats one small bait fish, ~3", at a time and even that most usually occurs out of sight some time in the night. Jibran

headbanger_jib has grown one to 32" and had no problem.

At present I've given up trying to understand what a possible cause is of this behavior of my specimen. It's got its own 240 gal presently.

It's a nice specimen. Maybe it desires live food.

I think you need to give it a cave, and they prefer to eat only at night, mine was always fed at night, only massivore or earthworms and once they cross 18-20" then they get a lot braver.

Mine even at 30"+ used to stay in the shadow of my gator gar, when it used to come up to the surface for Pellets, and this was in a 6500gallon pond, with dark green pea soup water( wasn't able to control algae then.

You have a lovely specimen, makes me miss mine.
TITLE --->"pics of hookers for the first time !!!!!"

comments:
1)Love the fish, congrats on having the worst title thread in MFK history...lol
Reactions: vincentwugwg, moe214 and Renegade Aquatics

Appreciate your input guys. Except for the last week, it always had a cave in my care and I only fed late at night before going to bed. It would most usually run into its cave when I walked by, never getting any braver, so it's been pretty timid for me...
My DIY Public Aquarium build http://www.planetcatfish.com/forum/viewtopic.php?f=4&t=33968
Vids & pics on MFK http://www.monsterfishkeepers.com/forums/threads/fish-story-aquarium-and-rescue-naples-fl-two-4500-gal-13x13x4-5.603969/
My databases http://www.monsterfishkeepers.com/forums/threads/two-databases-longest-f-w-fish-rating-f-w-fish-by-continent-and-family.660258/
Reactions: Deadliestviper7

Mine used to get super active after dark, running all around the tank, I still remember sitting in pitch darkness searching for a glint of its eyes.
TITLE --->"pics of hookers for the first time !!!!!"

comments:
1)Love the fish, congrats on having the worst title thread in MFK history...lol
Reactions: jimoo

headbanger_jib said:
Mine used to get super active after dark, running all around the tank, I still remember sitting in pitch darkness searching for a glint of its eyes.
Click to expand...

Add some plants,in the wild these guys hang around the edges of cover(at least until about 36 inches)

No, no plants for me. That's high maintenance I can't afford besides other cons.

Perhaps one problem is it is never pitch dark in my fish house / exhibit floor, there is always low night light on. He is more active at night sure but still hides when I walk by. Once a week or so he'd be not afraid of me and even interact a bit, day or night. I can't crack a rhyme or reason for it.

Several times he'd feed in front of me too in all this time but most usually the baitfish I give him would only disappear at some point of time during the night with no one around. Perhaps as you said, again, due to night light (I feed only at night before my bed time). As stated, 3-5 times out of 10 he won't even eat the baitfish. Sometimes not touching it at all, otherwise ripping and shredding it, as if an angry restaurant customer sending bad soup back to the kitchen - "I can't eat that!!!".

One big difference is that R rmkblades had many tank mates with it when it was in his tank. So a dither effect cannot be discounted. I've not risked putting much of anything with him yet except tried once with a 4' Indian mottled eel, which he started biting after a few days, and once I tried an umbee for several weeks which was deathly intimidated by the ARTC so I rehomed it. 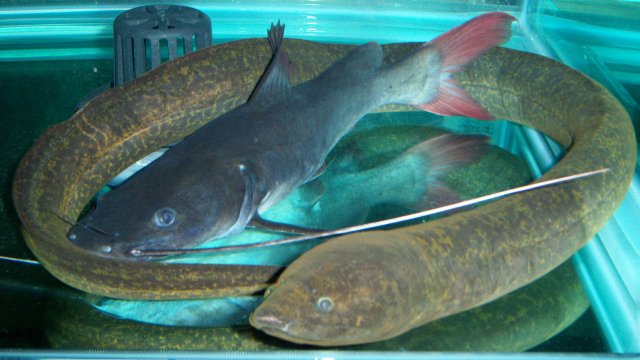 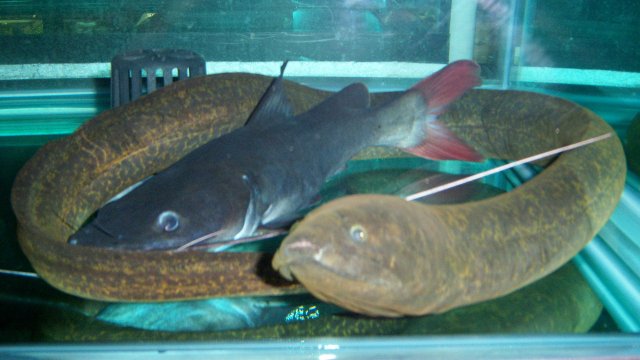 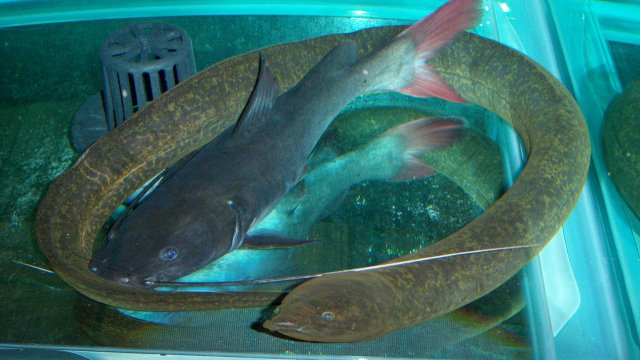 I don't think tank mates will help. My room would be completely dark, only a little moon light that would pass the blinds maybe was present.
Reactions: Fishman Dave

Give him a big section of PVC pipe to hide in. He's most likely stressed with lack of hiding places. Have you tried fresh fish filets? Maybe some tilapia or trout? They're normally pigs.
You must log in or register to reply here.
Share:
Facebook Twitter Reddit Pinterest Tumblr WhatsApp Email Link
Top Bottom