This is not really about monster fish. I am breeding Dalmatian Mollies and Guppies as live food for my Oscar and African cichlids. I was going to breed crayfish for them, but this turned out to be much more convenient.

My 42g custom Molly breeder tank is also the sump for my 55g African Mooneyfish (Mono Sebae) show tank. This is a brackish system at 1.010 density, and I filter the water coming into the sump, and going out of it. 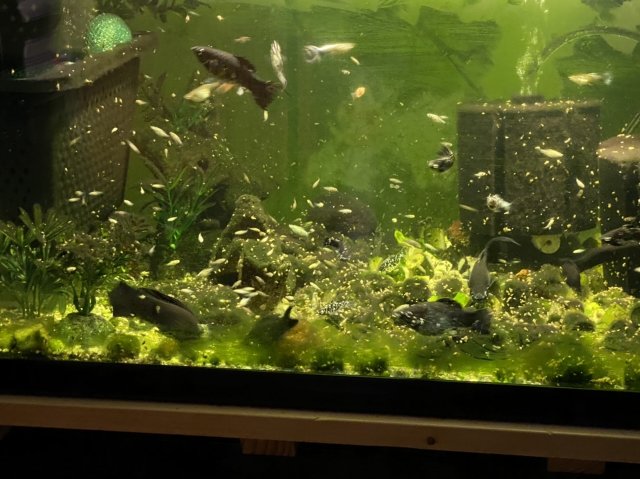 Basically I’m breeding fish in both the 55 and 42, and my largest Mollies are in the 55, with their fry washing down the overflow to be captured below. A good number of the fry do avoid being eaten somehow, and wind up in the breeder.

I have three overflow siphons from the 55 which dump into a basket full of floss, forming a small pond that also overflows slightly, allowing the fry to escape to the main breeder tank.

I am using tap water (about 8pH & 2gH) and lots of crushed oystershell. I buy Instant Ocean and Dechlor & I am mostly just mixing the water right in the 55 during water changes. I top off water twice a week and I change the water 50% every two to three weeks.

My freshwater tanks are getting about twice as many water changes but it seems to be OK for my brackish system because everyone is very healthy and the Mollies, Guppies, and unidentifiable snails are breeding prolifically.

(Nothing from the Mooneyfish, but they are only half grown. They are not known to breed well in captivity and a 55g is really too small for them. They were scheduled to go into a 125g, But then I had an explosion of African cichlids, and well, you know the story…)

The system has been going about one year now. I have produced several hundreds of Molly and Guppy fry from four pet store Mollies and a dozen Guppies. One male Molly turned out to be quite lovely and exotic but not a breeder. The smaller of the other two males was eaten, but one large male and very large female (And their descendants) have produced About 10 generations in a year.

The story with the guppies was quite similar. Most of the original dozen were eaten or did not produce. But two beautiful males and two large females survived. Many of their descendants, as well as descendants of the Dalmatians are living in the 125 gallon tank, 75 gallon Oscar tank (where they are readily consumed) and the 55 gallon patio tank.

The African cichlids are not eating the live fish as readily as the Oscar is and so I have developed quite a population in the 125 and the 55 gallon patio tank. That patio tank has a 30 gallon sump, and there are fry living in it.

They are also in the 20 gallon sump of the Oscar tank. There’s other tanks are all freshwater by the way & fish seem to make the transition readily with minimal acclamation.

So basically I have eight vessels going in three systems and every one now contains fry. 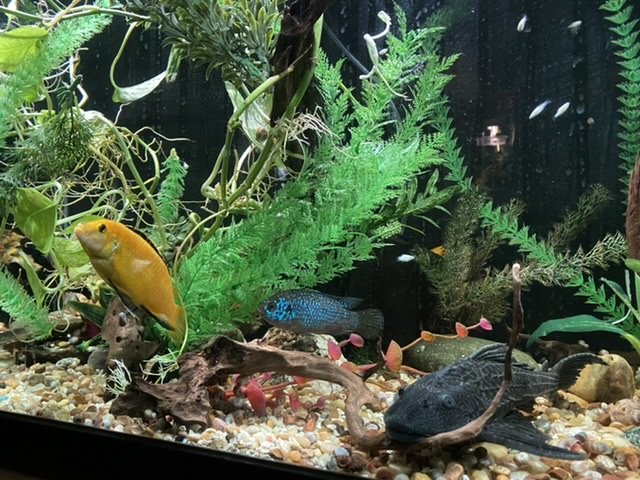 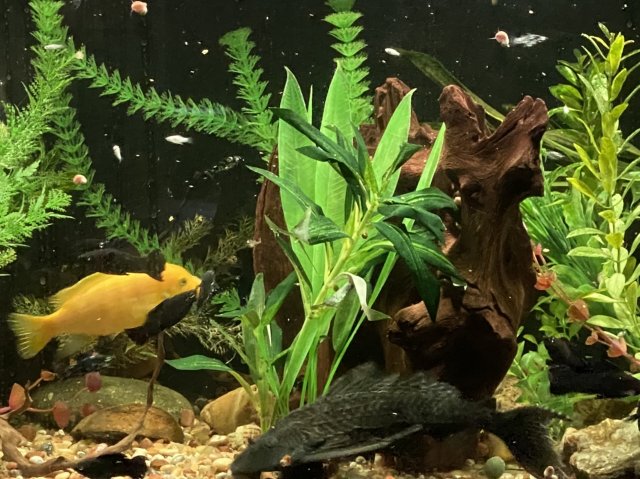 Regarding the African Mooneyfish, I am not actually attempting to breed them at all. In fact, with six of them in a 55 ,they are way too crowded. 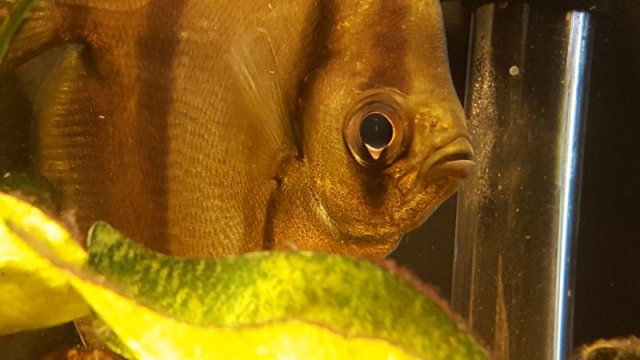 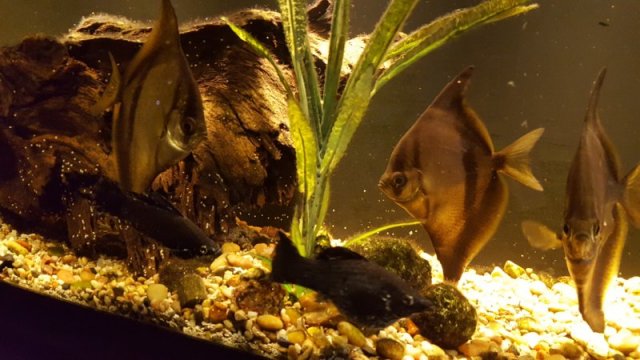 Also they grow in freshwater and move to brackish water as juveniles, and eventually to the ocean. I believe they must breed in the shallow, warm ocean water, before swimming to deliver their young in a fresh Pond.

I currently have six of these fish that I have been growing out for a year and they could eventually be twice the current height if I put them in a 200 gallon tank.

Regarding the snails:
I started out with some Nerite Tiger snails in the 55, who laid tons of eggs and never hatch. There’s just not enough salt for them.

Somehow I wound up with some tiny white snails. There are millions of them living in the algae and feeding on the foam filters & bio media. When they took off breeding also took off. I think the fish fry are feeding on microscopic snails and snail eggs in the algae.

However it works, it works and the fish are all very well fed and grow rapidly. I supplement their algae and snail diet with lots of Ocean Nutrition and Optimum flakes.

Monos are fond of worms and they will readily eat red worms or wax worms or mealworms. They also love the stinky garlic pellet foods.
Expand signature
I hear bubbles 24/7
Reactions: YankeeJack

Pretty cool. Was a fun read. Great pics! Got a nice system going there. Maybe get some high-end Mollies and guppies so you can spawn those, since you seem to have quite a prolific molly and guppy factory going . Thanks for sharing!

By the way those black dalmatian mollies are just pigs when it comes to eating algae. Each one of them in the upper tank had its own little patch of the back which it was deforesting down to the bare glass.

I worried about a lot of algae in this tank because I don’t have any brackish fish which are bottom feeders but mollies are good enough at this.
Expand signature
I hear bubbles 24/7
You must log in or register to reply here.
Share:
Facebook Twitter Reddit Pinterest Tumblr WhatsApp Email Link
Top Bottom