Deadeye said:
One issue I have been having is with my acrylic hood. Turns out that bows. Any ideas on straightening it out or should I come up with a way to clamp it down?
Click to expand...

Thats the nature of acrylic as hoods it will always sag. I guess Lexan is not supposed to do that. Never tried it to find out.
Reactions: Deadeye

DMD123 said:
Thats the nature of acrylic as hoods it will always sag. I guess Lexan is not supposed to do that. Never tried it to find out.
Click to expand...

This one is lexan, it hasn’t bowed too much, just enough where it doesn’t sit perfectly.
Expand signature
“There’s always a bigger fish.”

Been a while since I had a fish that I’m scared to keep my hand in the tank with…and I’m loving it.
I know he’s too small to do any real damage right now, but I still have no desire to get bitten (or give him a taste for blood). He almost took a lunge at me yesterday (saw him preparing like he does with his food).
At 8 inches it’s gonna make my clownfish seem like it tickles.
Expand signature
“There’s always a bigger fish.”
Reactions: Matth05 and jjohnwm

Gave him a frozen river shrimp yesterday…and now I know that neocardina will not be a viable tankmate option lol
He has easily put on half an inch or more since getting him and is always out patrolling.
Seems most of my ramshorn snails have disappeared (I guess that’s what you get for tossing them into an uncycled tank). Hopefully enough are left to breed back to high numbers. Plenty of pond snails in there, and scuds are starting to come back. I need some sort of cleanup crew that aren’t on the menu.
Expand signature
“There’s always a bigger fish.”
Reactions: Matth05

Won’t hold still to let me get a good shot…
Definitely growing a lot.
Not the best photo, but here’s a top profile: 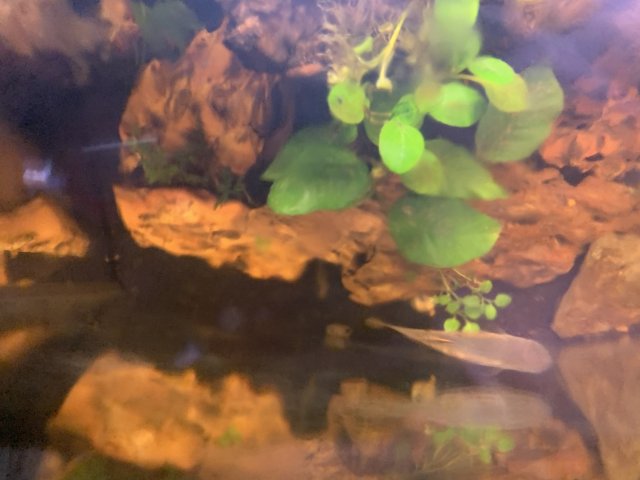 Been a while since I updated…he’s basically doubled in size since I got him (or more). Still barely close to full grown of course. I’d add a picture but it’s impossible to get a good one because he’s always begging for food whenever I get close…and I thought my blood parrot was bad.
Basically if it touches the water, it’s food. Shrimp, pellets, crickets, the siphon, etc.
I added some daphnia to the tank last night - hopefully they spread to large proportions and help tackle the large algae problem. And as they breed I’ll be able to take some out and transfer them to other tanks. They were originally meant to be sunfish food…but since that failed I might as well put them in a tank where they won’t be gone overnight.
Expand signature
“There’s always a bigger fish.”
Reactions: DMD123, tlindsey, Matth05 and 1 other person
You must log in or register to reply here.
Share:
Facebook Twitter Reddit Pinterest Tumblr WhatsApp Email Link
Top Bottom