If you’ve never done suspension work on a truck or a large car, you have missed out on a heroic part of the manly arts. In the physical effort department, changing press-fit ball joints is three orders of magnitude above handyman things like tire rotations, spark plugs and coolant flushes.

Anyhow, To avoid being totally broke for the Near future, I rebuilt the entire front suspension on my truck myself.

I changed all 4 ball joints and 4 tie rod ends. (I had previously done the springs and shocks), I did the sway bar links and bushing kit. It also got brake pads. All the elastic bushings were fine so I don’t have to mess with them yet.

This is a ball joint press and some of the press plates and cups that go with it. 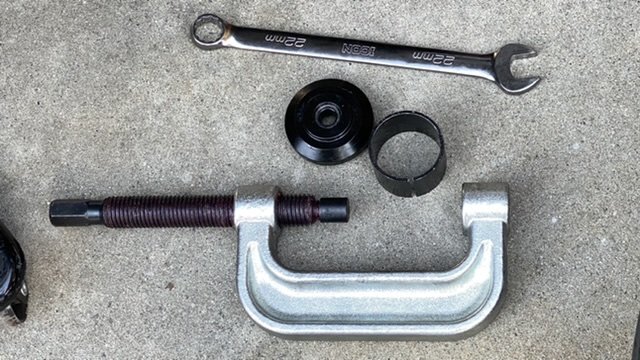 You can press these on a hydraulic shop press which is much easier but you have to take the A-frames off the vehicle.

The upper ball joints are smaller and easier and I did them right on the truck. 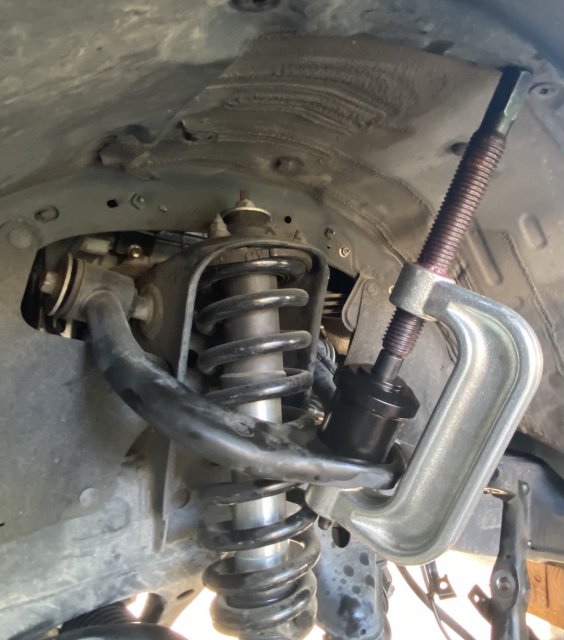 For removing the ball joint, this press just barely fit without removing the spring, and you can see it is touching the plastic inner fender.

Pressing it back in goes much easier, 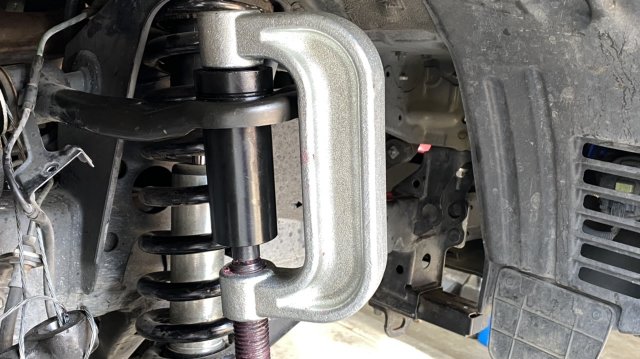 My ball joint kit does not fit the lower ball joint on my Toyota, so I modified the cup by splitting it open with a pneumatic cut off wheel. Then I very gingerly spread it apart with pry bars and placed it over the ball joint. 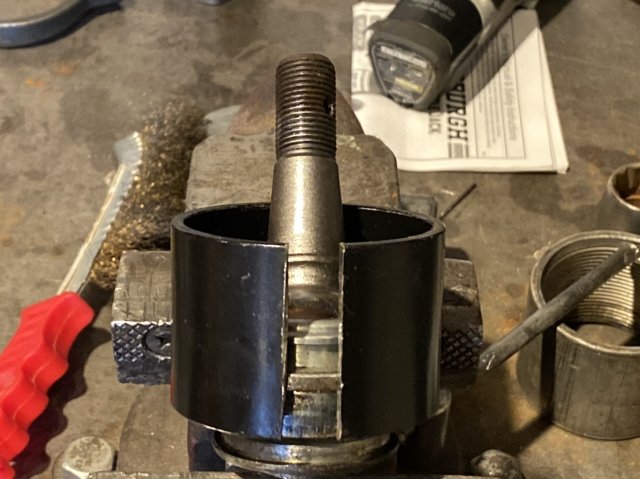 To do the lower suspension arm I took the arms off the truck and put them on a rug, so they don’t slide on the floor. 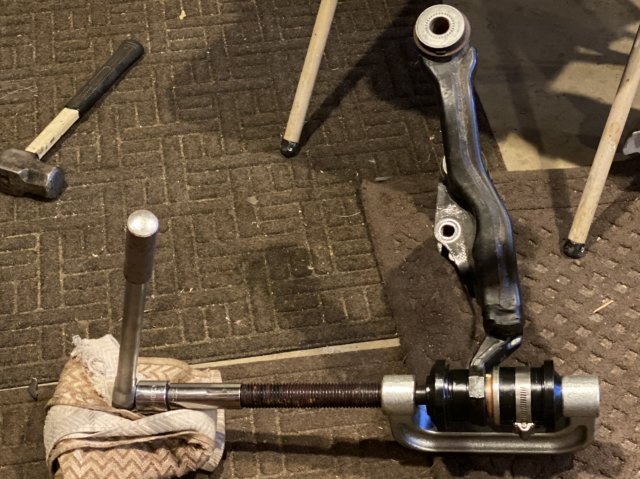 A screw press this small really doesn’t generate enough power to push these big ball joints in, so some people put a pneumatic gun on the screw. I just tighten it up with the big wrench until the press starts to spring a little bit. Then I smack the press on the end with an 8 pound sledge hammer.

There is a heavy interference fit on the new lower ball joints, and you have to press them in to this 2 1/2 inch forged steel eye. 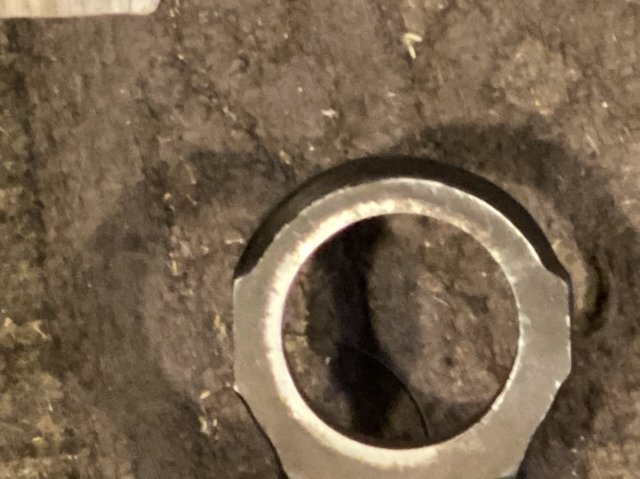 It takes 8-10 tons of pressure, Unless you hit that ring up with a torch and make it expand first. I hate to heat a forging up with a torch unless I have to. Plus the paint on my A-frames is still really nice and I didn’t want to burn it all off.

All the hard work is now done but I still have to put the last arm back on the truck and reinstall the wheel. I will set it up in the garage and do an alignment with some kite string but next week I can take it in and get a “digital”front end alignment.
Expand signature
I hear bubbles 24/7
Reactions: 1 2many

Everything went together well on the truck & after I finished the suspension I took it for a little test run. It was like driving a totally different truck.

I pulled it into the garage yesterday (After cleaning out a truck sized space) and aligned the wheels. (My driveway is not flat enough to do an alignment.) I don’t have the finest alignment tools but I know what to do to get close enough.

Everything measured really well which means that my truck is not bent. Maybe now I’ll get 40,000 miles out of those 80,000 mile Michelin truck tires that I bought.
Expand signature
I hear bubbles 24/7
Reactions: 1 2many and tlindsey
K

Glad it all worked out for you.What kind of truck is it,got any photos of it?
Expand signature
We're from Philly and we fight!
-The Eagles

If you are overstocked,these guys will certainly help with that. 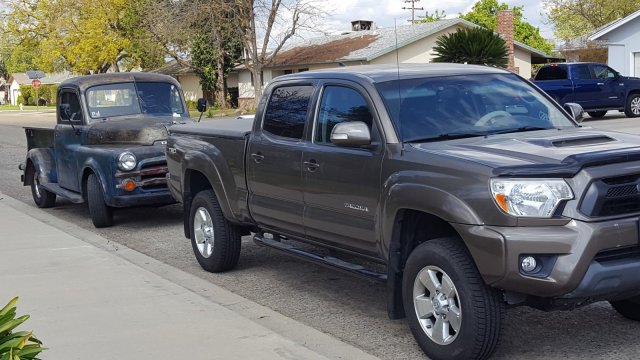 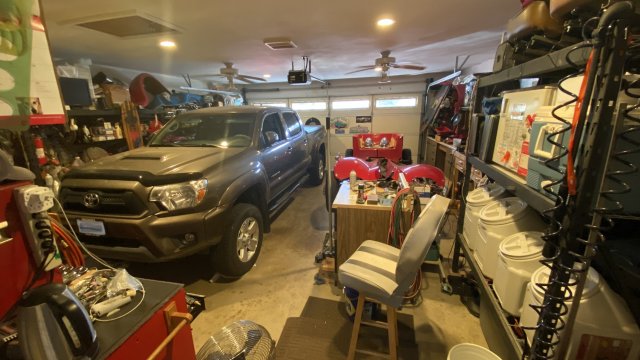 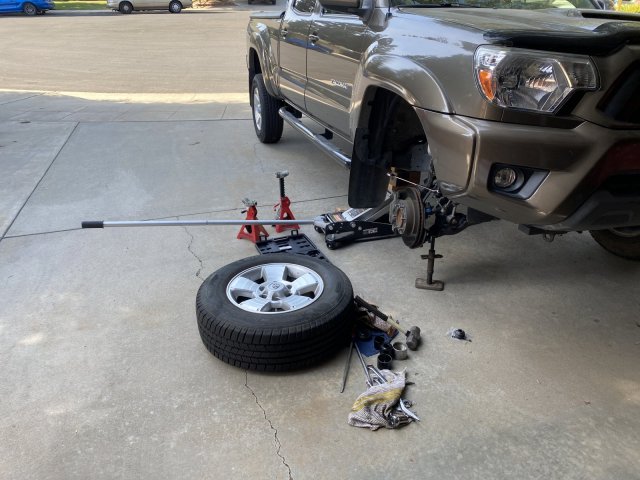 All I have ever had for alignment work is this magnetic angle finder and an ordinary magnetic torpedo level and kite string. 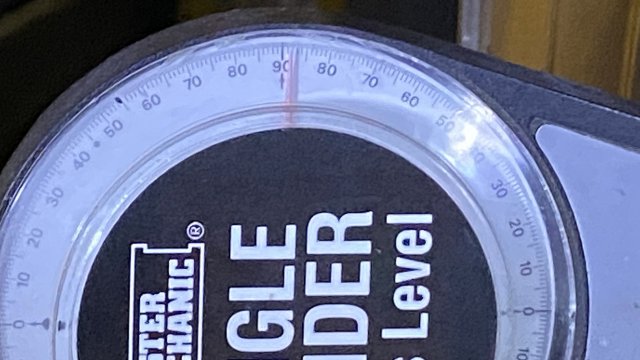 But now that you can buy digital levels cheaply, I am encouraged to set up a more elaborate and accurate alignment kit.

There are some vehicles in this world that require frequent wheel alignment & it seems that I own one of them. Actually, all of my vehicles have required wheel alignment, because I often buy used cars that run fine but need suspension work.
Expand signature
I hear bubbles 24/7
You must log in or register to reply here.
Share:
Facebook Twitter Reddit Pinterest Tumblr WhatsApp Email Link
Top Bottom