Inventory of Fish in 15,000 gallon tank the Mini Mega and new Pictures (Update)

I always intended to have mid sized/community fish in my 15,000 gallon. It has worked out pretty well most of the time. The tank has had very few problems. The fish in the tank at present are listed at the bottom of this article and are listed by date bought, number in the tank, scientific name, common name, source, location of source, size now, size when acquired 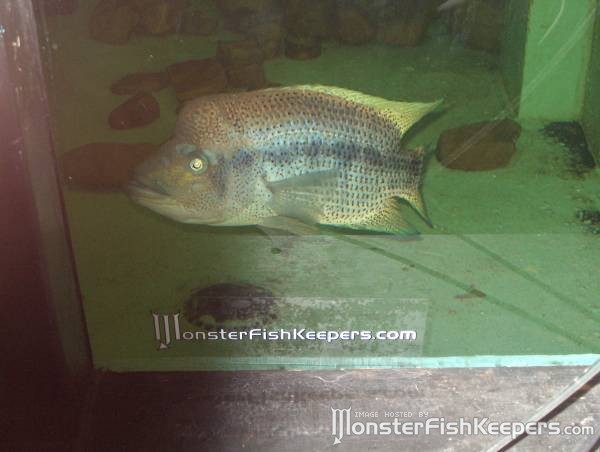 I did move a few fish over the years due to problems they had as community fish or size problems.

@1 Stingrays moved: The male leopoldi (Potamotrygon motoro) stingray nearly killed his breeding partner (Potamotrygon motoro) after she had young and I removed her to an 800g to recover. This was done 2 times both times former friends swam in the tank with large nets (Wayne Davey and Wei Hing Lam) to catch her. 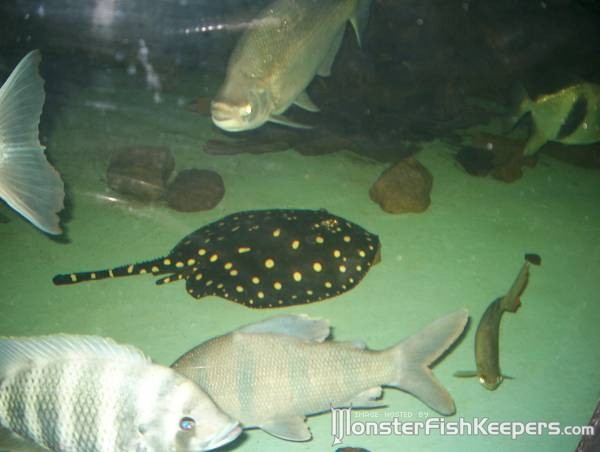 @2. 5 Niger catfish (Pseudodoras niger) moved to 52k because the tank was getting too crowded and they were all 2 feet or longer. 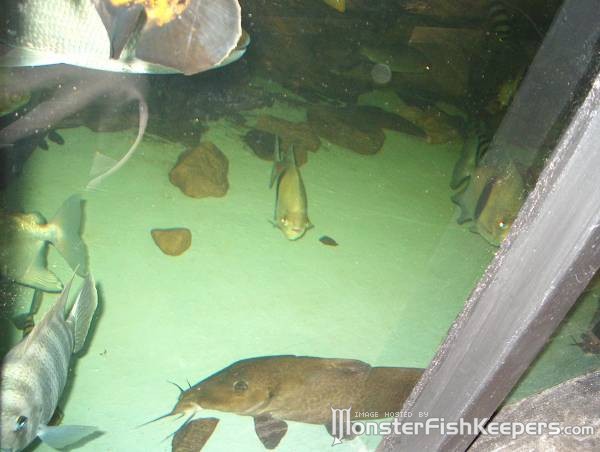 @3. 6 Imperial or Emperor shark (Panagasius sanitswongi) were starting to wolf down my cichlids (Everything under 12") eventually one of the choked to death on a 13" Black Belt cichlid. When famed explorer/wholesaler Oliver Lucanus (Owner of Below Water in Montreal) later visited with a British Nature show producer. Oliver went into the tank when I reduced the water level to 2 feet and caught the Nigers and the 6 remaining sharks.

@4. Alligator gar (Lepisosteus spatula) was removed by me with a long poled net while taking down a 14" clarias (Clarias batrachus). The Clarias was regurgitated and after 4 months rehab survived and is back in the 15k again. The gar now resides in a 500g with a 3 foot lungfish (Protopterus annectens). I have taken both of them outside for the summers and placed them in a 16 foot by 8 foot by 2 1/2 foot high pond. 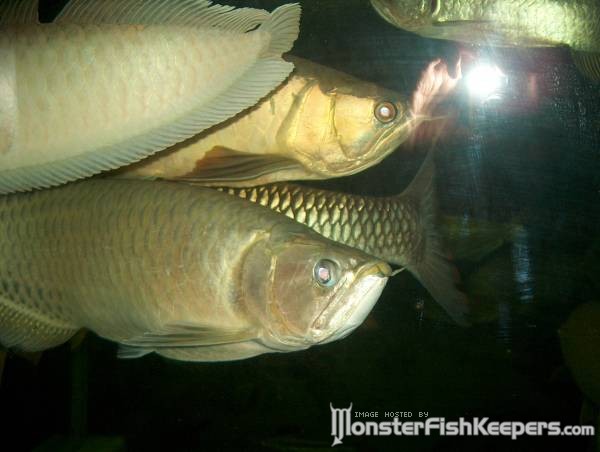 Even with such a large volume of water I am experiencing crowding problems due to the growth of many of the fish creating a crowding problem just due to growth not addition of fish. In 1998 I ordered a large number of Brycon melanopterus wanting a school of fast swimming fish growing about 10 to 12" long. Instead I received in a batch of 36 fish only 2 Brycon melanopterus and a mix of 34 Brycon falcatus and Brycon brevicauda which have grown between 20 and 24". So I've got to remove a few out of the tank this summer. The Goramy (also called The Gouramie and Giant Gouramie) are slowly reaching size. The pink tailed barb Leptobarbus hoeveni have reached impressive 24". The various arowanas are all growing at various rates the largest about 36". Although my stingray has helped reduce the population he now has a problem catching any of the fish remaining because they are smart to him. 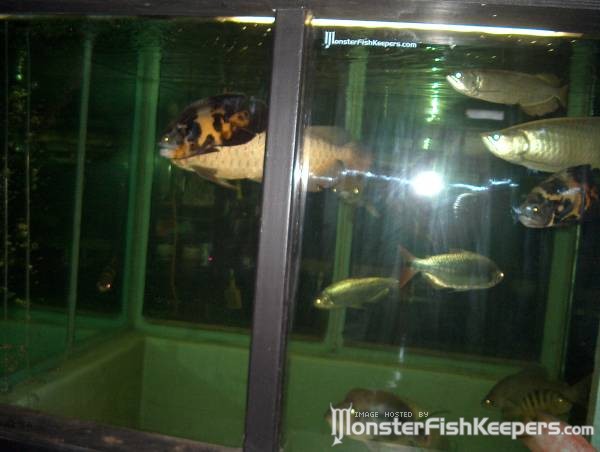 No disease except for hole in the head on 3 old cichlids which happens often with Oscars in any size tank.. 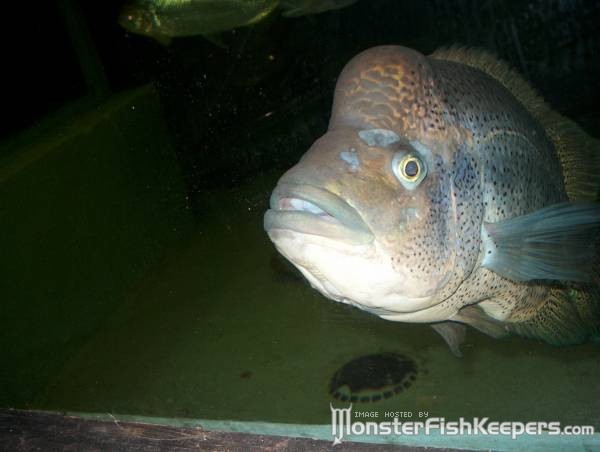 I feed only once a week on average. The amount fed is very large to make sure all the fish get a good amount each. I feed 1 pound of Flake Food, 3 pounds of floating pellets, 4 pounds of sinking pellets, 6 to 11 pounds of thawed lake smelt,whitefish,mackeral or lake trout, 2 pounds of cat or dog pellets, some fruit & veggies. I keep birds as well so when I'm preparing their food I also take a bit out for the fish. The bird food consists of thawed mixed veggies beans, carrots, peas, and corn. The fruit consists of grapes, diced apple, diced cantaloupe, pears and diced banana. One note here is any cut outs from the fruit are fed to my superworms and the skins of the cantaloupe are fed to my baby bristlenose plecos. 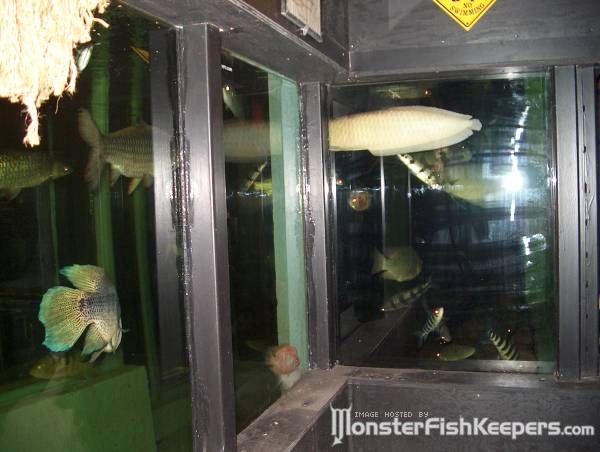 I use a 600 gallon sand filter on a manual basis. Most often not at all but always after a heavy feeding. I also use an airstone all the time and recently added a second airstone. They operate from the bottom of the tank (6 feet deep). I utilize large water changes (up to 4,000 gallons a week to keep the water clean. The tank has 4 swimming pool floor drains that advance to the water to the filter. I use up to 4,000 gallon weekly water changes to keep the tank clean 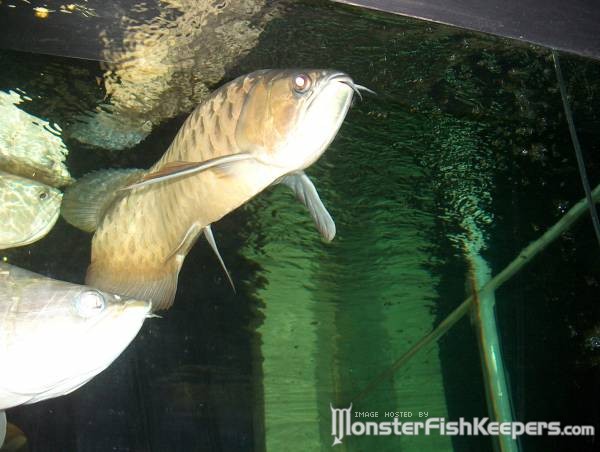 I use two large oil fired water heaters that keep the tank heated. One heats new cool water coming to the tank. The other is in a loop using existing water. I keep the tank in the 70 to 75 degree range. 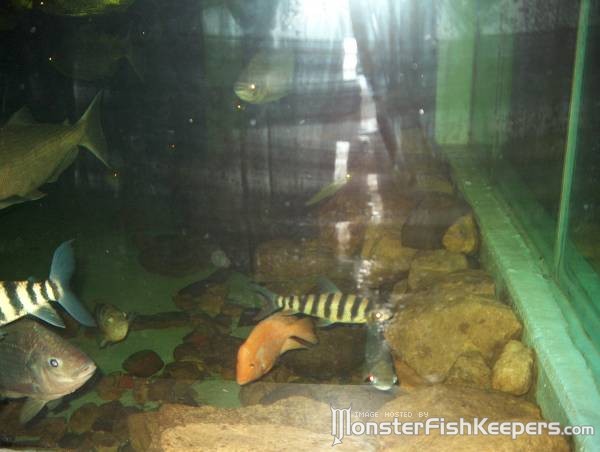 I use natural light from a window on one side of the tank. I installed a glass panel in the concrete wall on one side of the tank abutting the existing window which is 4 feet by 3 feet. I originally also installed 3 sodium lights and 6 four foot 2 bulb florescent lights. At present I only use 2 of the 2 bulb florescent lights because I find the fish are more comfortable when the lighting is not bright. 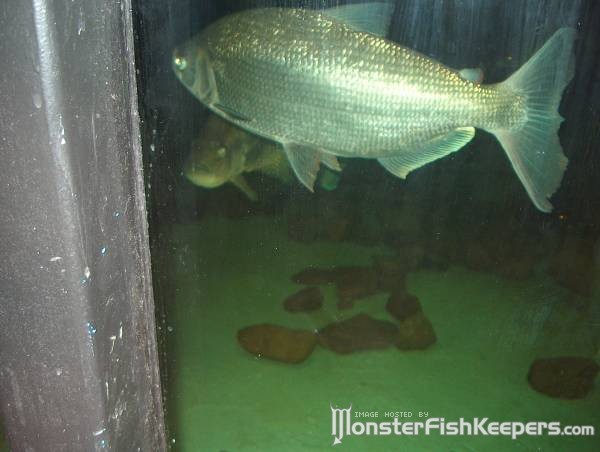 @1. I most regret losing a tarpon (megalops atlanticus) that I had for 7 years. He was 36 inches long when he died. I was watching as he jumped out of the water and when he landed he started spiraling and died in seconds. The tank has 2 inch thick insulation across the entire top about 2 feet above the water level. If he hit the insulation he couldn't get hurt.

@2.I lost a 36" silver arowana when a friend who had been looking through an access door forgot to lock the door and a while later the arowana jumped out and eventually died. 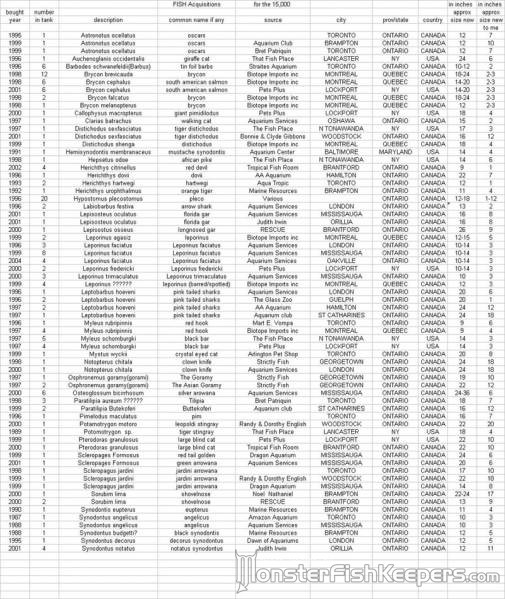 That is alot of food

The tank is 28 feet long and I put the food in at 3 different locations(feeding windows, some of which are 3 feet by 2 feet) which helps reduce the frenzy at feeding time. All the fish eat at feeding time. It takes 30 minutes to feed the tank.
196,560 litre (52,000 gallons) http://www.monsterfishkeepers.com/f...2-Building-My-50-000-Gallon-Monster-Mega-Tank

Seems like an awesome tank. You say the tank is 6 feet deep and 28 feet long, I was curious how long is the tank? Also what did you make the tank out of?

man that tank is amazing. im lovin your dovii. hes a beast
C

Arapaimag, you mention Oliver Lucanus (Owner of Below Water in Montreal), and I have heard his name before. Looked at his website but did not grasp what he was doing exactly...is he only an explorator/photograph or does he sell fish? I am asking because I live in Montreal, and I have a hard time getting very specific fish for my tanks.

Maybe you can give me a hint?

Thanks!
Creativity is allowing yourself to make mistakes. Art is knowing which ones to keep.
Scott Adams

I seriously bow down to you oh Great ONE!
H

you are a monster f^@#ing fish keeper