Is this HITH on this rainbowfish

Have you tested your water?
No

This dority rainbowfish has had these marks for a few months now. Im pretty sure none of the other fish in the tank have anything similar.

At first I just though it was scarring as these rainbowfish have scraped that area of their heads in the past but now I'm starting to wonder if it could HITH.

Fish has been eating fine. I water change every two or three days. I haven't tested water bc in this schedule it's always been the same when I test. Gets to about 20 nitrate by third day so that's why I change every 2-3 days

This is my 125g main tank. Earlier in the year I had a dority die of swim bladder issue and a panda garra died possibly from when a sponge tower and pvpc pipe was knocked down by a oleco. Also another panda garra disappeared at one point. I assume it died and got eaten or jumped out and I just haven't found the body.. I took out all the decorations when this happened and couldnt find anything.

Other than this, the tank seems to be fine. It has my clown Loaches and other rainbowfish.


I thought about buying NLS hex shield as that seems like a noninvasive treatment I could try.

Since it hasn't gone away I'm thinking maybe there's an issue. I can't tell if it's gotten worse as I don't have any pics from March. 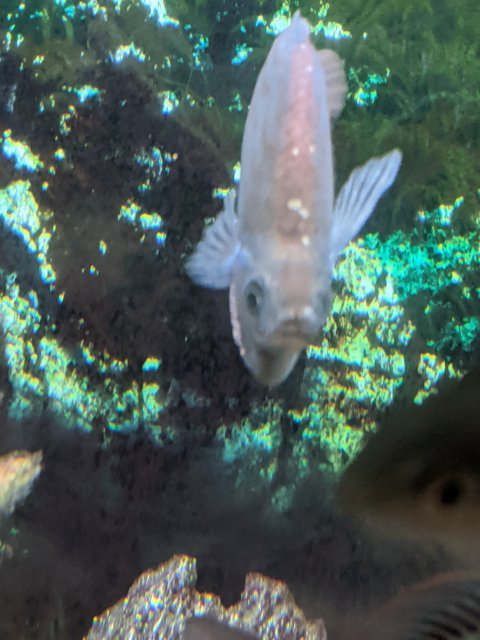 Here are two other pics but the glass is dirty. Maybe the other rainbowfish has a mark on it in that pic but I don't really notice it when watching the tank. 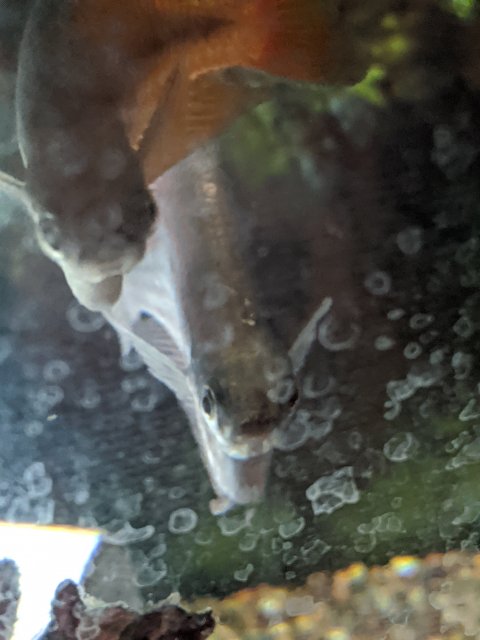 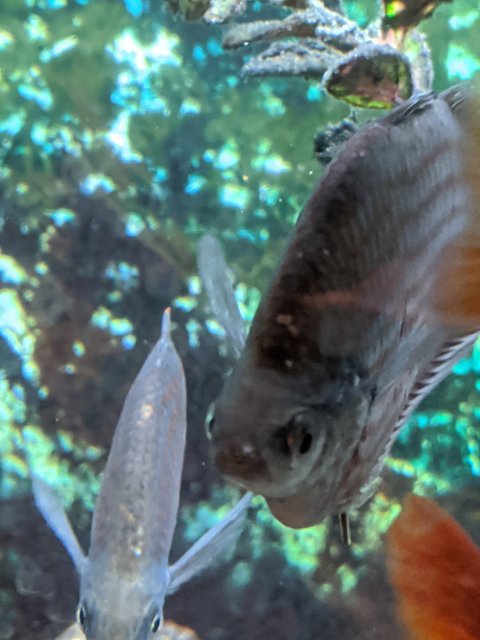 kno4te said:
Don’t think it’s hith. I’d watch and see if those areas get worse. Kind of start eroding away.
Click to expand...

Thank you for the feedback. It's reassuring.

I started reading RD's thread on the Epson salt food soak. It seems like it's a good preventative measure that I never did on my fish so I'm going feed my main tank and QT according to those directions.

There's another fish I'm going to post about for. The QT tank that might benefit from such treatment also.
C

It's good to have pics. I was worried this had spread but even in the pic in looks like the other rainbowfish has a similar situation going on.

I keep watching the other fish but nothing seems worry some except the issue I posted with the pkeco but the response was it's likely unrelated.

As I said in pleco thread, since I'm home all the time anyway right now, I'm just gonna do every two day water changes just to keep pristine water conditions and I'll keep watching if this gets worse or if other fish develop something similar .

I did the Epson food soak but it seem to do anything which makes sense as knot4e said it didn't like like hex or HITH.
Reactions: tlindsey

For me, the photos are not clear enough to discern HLLE or something else.
Most rainbows come from either swift moving or nearly pristine waters with very low nitrate (nearly 0ppm) especially those from low human population areas like Papua.
Most HLLE can be prevented by more frequent and larger regular water changes
C

I made repashy for the first time in over a year on Thursday and feed it that day and Friday. The rainbows picked at it hard especially the Doritys in question.

I noticed Friday that maybe their mouth were marked. I drove myself crazy Sat and Sunday looking at pics of cottonmouth columnaris or fungus in fish.

If definitely hasn't gotten worse and possibly improved though I can't be sure. When I look at it through the water with no glass in between when I open the lid, it looks it could be discolor like a scrape more than white growing there but at certain angles it could be white when viewed through the glass.

Any thoughts? Best pics I could get. Video might be clearer. Thanks for any feedback. Even if you aren't sure I'd appreciate any thoughts if it were your fish.

One random thing I noticed today is that either my ink bird or my portal thermometer is off in temp. Inkbitf was showing 80 degrees while portal shows 77.5. portal thing amused to show one degrees lower. I'm gonna try cleaning off the probe on inkbird. So temp might be lower than I thought but that actually should be better for rainbows. 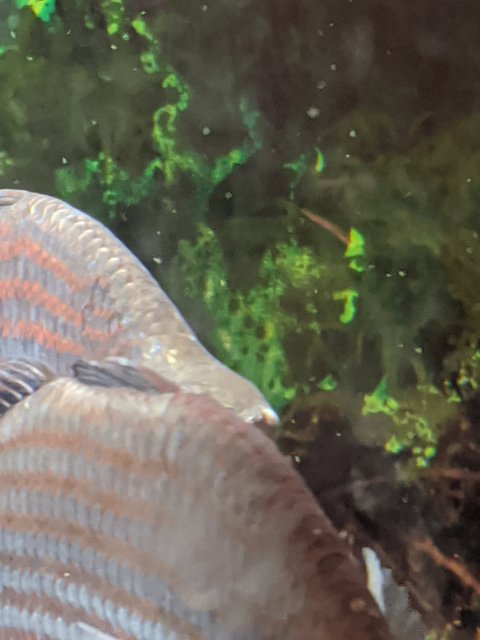 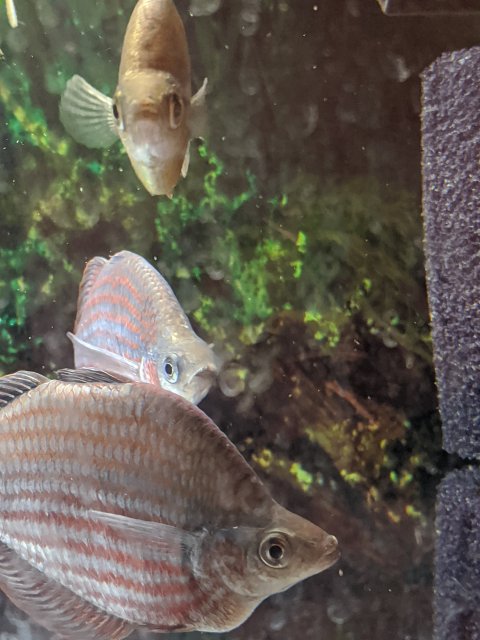 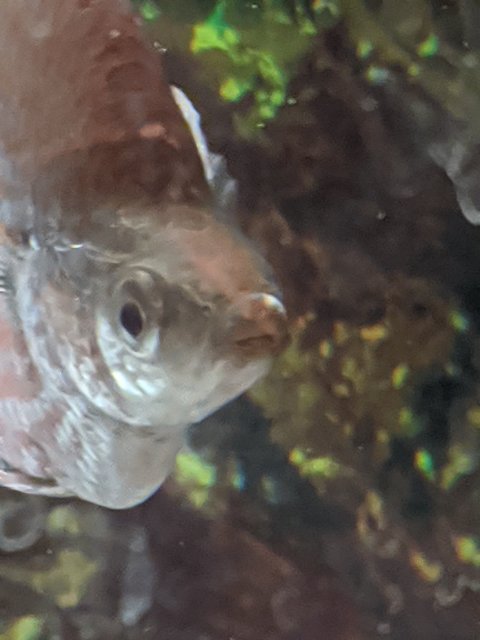 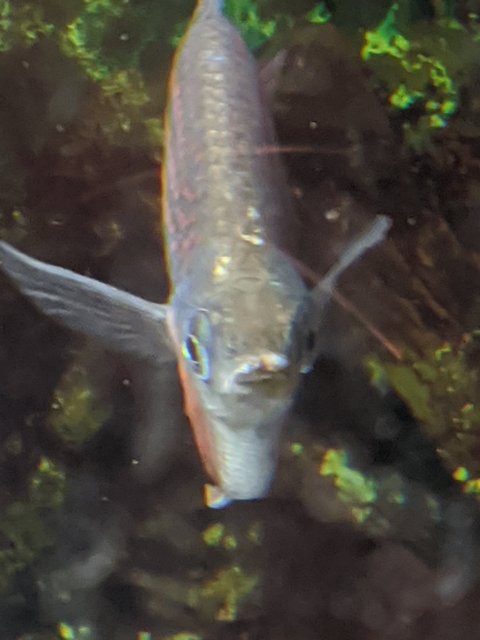 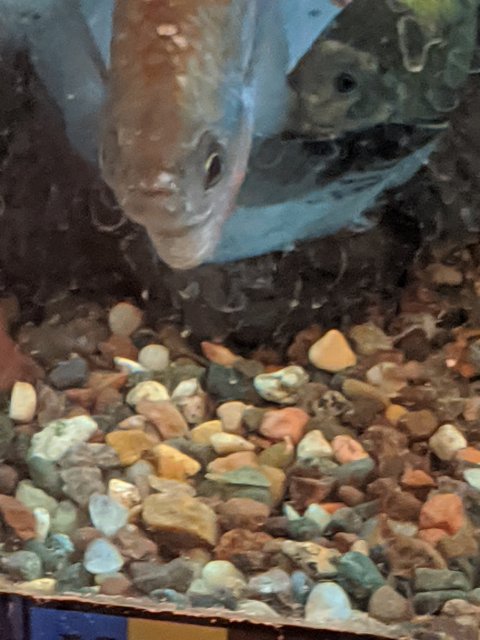 Still not really convincing but glad to hear it’s better. If there was a bacterial infection it’d be worse or what ever is triggered the hith hasn’t stop then it’ll be worse. So keep doing what ur doing cause it’s working.
Expand signature
125g -polys, wood cats, pike cichlids, m-dayi, Gymnotus, and bushfish.
C

kno4te said:
Still not really convincing but glad to hear it’s better. If there was a bacterial infection it’d be worse or what ever is triggered the hith hasn’t stop then it’ll be worse. So keep doing what ur doing cause it’s working.
Click to expand...

Thanks for the feedback. It's good to hear feedback from people bc I drive myself nuts looking at it and wondering and I at least an calmed down a bit by responses.

The fish in question don't seem to be acting any different. Still eating and one of them last water change was showing a strong breeding stripe and was trying to mate. Usually these Doritys are passive and the two millennium males are the ones breeding.

From looking at disease pics this weekend, there definitely is no wool on body or white patched or flesh erosion that I can see so I'm hoping it's not columnaris. That's the one I worry most about as this has my 20 year old clown Loaches.


I'll just keep changing water every two days and keep watching to see if it gets worse or if other fish develop anything.

I'm gonna feed repashy only at night so pleco eats it. I figure rainbows are less likely to pick at it then also.
Reactions: kno4te
C

This looks like a new mark today. My plan was to see if things got better or worse and this seems like a new development. I have a ten gallon that I had a fish with swim bladder in (from a ten gallon not this tank). She didn't improve after two weeks and kanaplex so I just moved her back since it appears that it can't be fixed if I did fasting, kanaplex, and Epson salt.

I've been trying not to move them but now I think maybe it's better for the whole tank even if it might be worse for these two.

If I do move them I don't know if I dose with meds or try salt first or just wait. Thanks for any input. 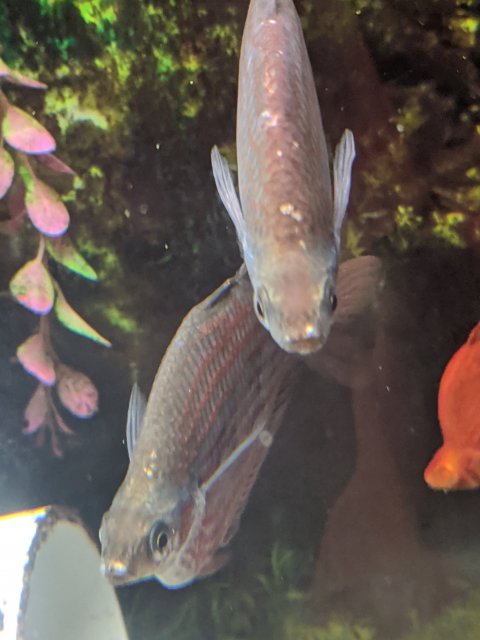 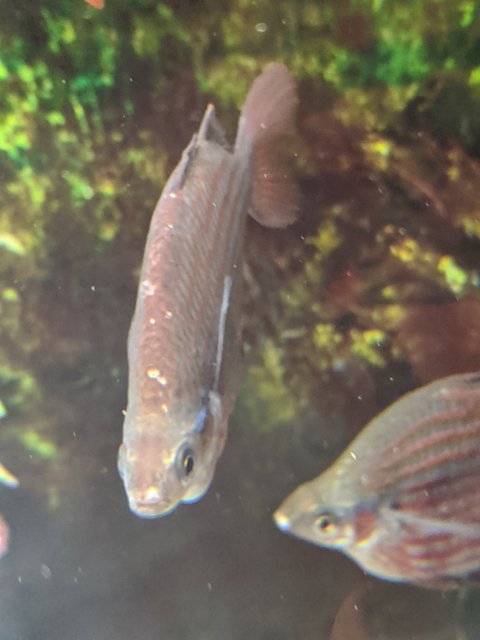 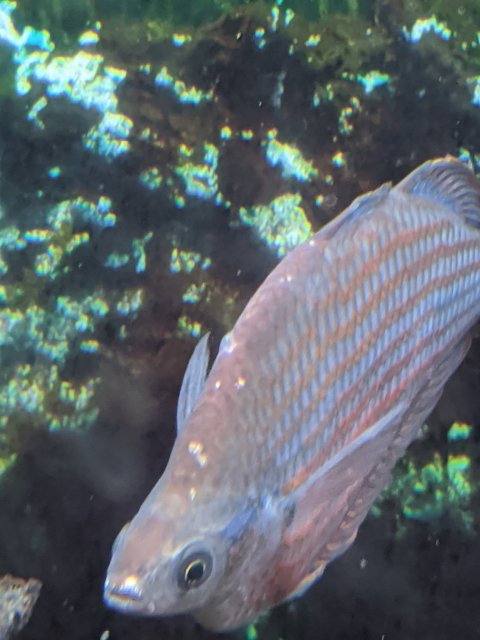 I read that rainbows often get white marks on their mouths from running into stuff or digging at gravel and I've had fish have white marks that do go away.

White marks on mouth can be signs of columnaris also so that's why this new mark concerns me.