Lowering Ammonia in tank if source water also has ammonia

As the title says, I have ammonia in my source water. It is city water and I have contacted them to let them know what my tests show and they replied with 'its within acceptable range.'

Problem is, I can't do any kind of water changes or water top offs in my smaller tanks without dramatically spiking the ammonia and risking or actually killing all my fish.

Does anyone have any idea what I can do? I work at a petstore down the street and because we are on the same city water, they also have ammonia in their treated water (its DI water, not RO). So, just buying water isn't really an option.

Should I try ammonia reducing chips/filter pads? I know ammolock and such like doesn't work well long term. I've never had this happen before either!

Prime promotes binding/detoxifying ammonia. If your tank is good and cycled should solve the issue for you.

PS: On the smaller tanks premix the prime with the water before adding.
"But... My wife said I can ONLY HAVE ONE TANK!!!"
A

Termitehunter said:
Prime promotes binding/detoxifying ammonia. If your tank is good and cycled should solve the issue for you.
Click to expand...

I haven't used prime in this tank yet, but I have used neutral regulator (pH here is also too high for my plants half the time) which claims to do the same thing as prime and it hasn't done anything. This tank in particular has been up for about six months.

I've also dosed the tank with stability as well with no help. Im wondering if Microbe Lift's Special Blend would help?

My 29 and 75gal are doing great despite the ammonia in the source water. It filters right out. This 10gal though.... it cant even get one molly alive due to the ammonia.

Ammonia in tap water usually means the facility is using chloramine as a disinfectant, because chloramine is created by combining 4 parts chlorine with 1 part ammonia.
This is done to keep a slight residual in the distribution system (the mission statement of any water provider), to protect humans from getting gastrointestinal diseases. Someones pet fish are not part of the equation, and should not be, because the needs of both fish and humans do not coincide.
It is up to the fish keeper to deal with that problem.
I also had chloramine as a disinfectant when living in the U.S,, so always had ammonia to deal with.
When doing water change in my tanks, I always added water initially to my sumps (not diet to tanks). In this way, the beneficial bacteria got first crack at the ammonia, so by the time it had passed thru that part of my system, ammonia was almost entirely gone.
I also dosed a dschlorinator to use up the chlorine part of the mix.
I had about 1000 gallons of tanks, and did 30-40% water changes every other day, and no ammonia issues. 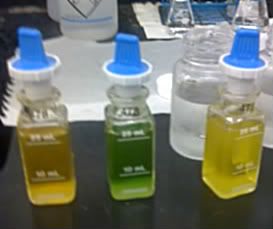 Because I worked in a lab, I tested before and after water change samples.
The bottle in the middle is a 2ppm standard (used to check accuracy), the one on the right is DI water (0ppm ammonia), and the one on the left is my tank water after a water change (basically a only trace) using my tap water to sump first, method.
A

That's interesting!!
I didn't know that about chloramines. I knew they existed and that Seachem water conditioners got rid of them. It explains why my larger tanks do so well with water changes (mine at home don't have sumps, but the biological filtration is very well established).

How would you go about doing something similar for a small tank, like this ten gallon? It is heavily planted with a HOB filter. All I want is one fish to live in it.
A

I went to buy water from a Primo refill station. This water goes through five levels of purification including RO and UV sterilization.

It still tests for ammonia.

So this new tank (9gal) I have is currently running with prime and stability to help rid of any ammonia before I put this poor betta into the new home.

If RO isn't removing ammonia, then how can I get rid of it in my smaller tanks?

How much ammonia is it showing? Also, even after dosing with Prime I believe it will still show ammonia. But if it's only barely a trace I wouldn't worry about it. It would only be half or a quarter of a trace after a water change and probably be all gone in less than a day.

If you're really worried, get something like a 200L barrel and put the water in there with prime and a filter to age for a week. Then do your water changes from that and top it off.
A

I'm seeing anywhere from 1.0 to 2.0ppm ammonia after prime. Water changes will only put more ammonia back in the system because the source water has ammonia in it. Would ammonia reducing filter pads help, do you think? I know my local petstore sells both the fluval and their own brand of ammonia reducing pads.

There's nothing but plants in the new tank at the moment, so I'm hoping with enough prime and stability I can get the tank where it needs to be before putting the fish in.

Im wondering if I just... fill a bucket with moss (i have a bigger tank full of it) and put the water in there if it would cycle well enough to use for water changes.

I want the water looking good before I put him in there because he has a tumor and poor water will only make that worse.
A

With enough Prime and Stability (and plants) I got the ammonia in the tank down.

Here's the newest addition to the Special Needs Crew. HMKing with a tumor.