Found out one thing interesting. It seems like having a deep sand layer makes a huge different in addition to the reactor. I originally had a 3 inch sand layer and recently made it about 5 or 6 inches and after a few weeks my nitrates dropped even more with less flow though the reactor. I'm running about 20 gallons per day, and dosing 12 ml vodka and hovering at 15 ppm. Zero slime on any filter socks as well.

And for my smaller 70 gallon my nitrates are at roughly 5ppm. And I only dose about 7ml per day. I also have zero slime and only clean filters about every other week.

So the reactor works great but pairing it with a deep layer of sand helps take some load off the reactor abs prevents slime build up.
Reactions: Hendre, twentyleagues and kno4te

anyway we can incorporate this into a water change system? I have any where between 8~22 pm no3 in my tap.

in my case (living in socal) making 65 gallons of ro every week would be a bit rough unless i find a unit that's extremely close to a 1:1 ratio and this seems like a cheaper alternative.
Expand signature
Planted 125 Gallon

SingAlongWithTsing said:
anyway we can incorporate this into a water change system? I have any where between 8~22 pm no3 in my tap.

in my case (living in socal) making 65 gallons of ro every week would be a bit rough unless i find a unit that's extremely close to a 1:1 ratio and this seems like a cheaper alternative.
Click to expand...

I cant exactly say if this idea will work but it may be work a shot. In order for it to work you'd need ample outside room and a pretty steady outdoor temp. Pretty much it would have to be consistently from 100+ gallons ( or 2 55 gallon drums connected) and attached a reactor to that and let it run for a week it should in theory drop your NO3 to almost zero. You could even make mini hydroponics design and incorporate some plants to really drop your NO3 levels to zero. Then when your WC time comes it would be a matter of pumping it out into your tank and refilling the barrels to cycle for another week .

You might even be OK just putting a reactor on your tank. Depending on your stocking levels and tank size you might be able to build a oversize reactor and run it pretty aggressively and do smaller water changes and let the reactor drop your nitrates down in the tank gradually. and hold them low. My guess is you should be able to hold the nitrate levels to match your tap or just above them. Worst case you can build the reactor to fit somewhere near your tank and if it dosnt work out after a few weeks then you can try the barrel system.

If I really run mine hard I can drop my NO3 levels at 10ppm per day , but the filters are a mess and it tends to go into swings so ive learned that running less water seems to be effective over the long run since the output of the reactor is less than 1ppm NO3 and produces zero slime.
Reactions: kno4te and Hendre

I built a cascade protein skimmer, it sure does a great job at removing any slime produced by the reactor, it dosnt produce much foam unless I have the reactor going and I have to run it pretty wet but it keeps the tank slime free. Plus it allows me to keep the nitrates really low. The skimmate is much darker than the photo shows but is still relatively wet compared to a salt water skimmer, id personal rather top of the tank every few days and have much cleaner water. 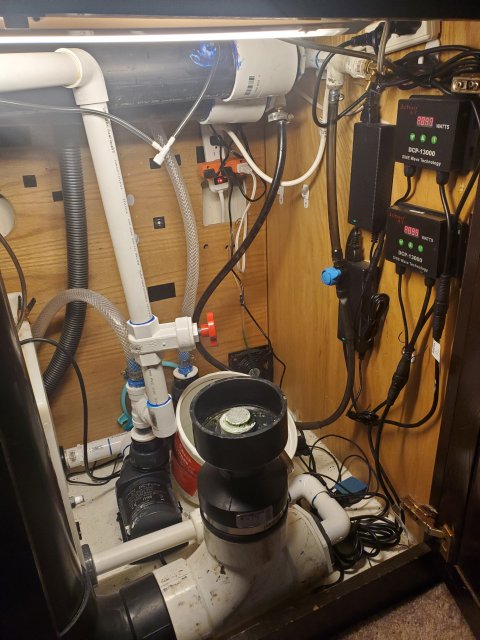 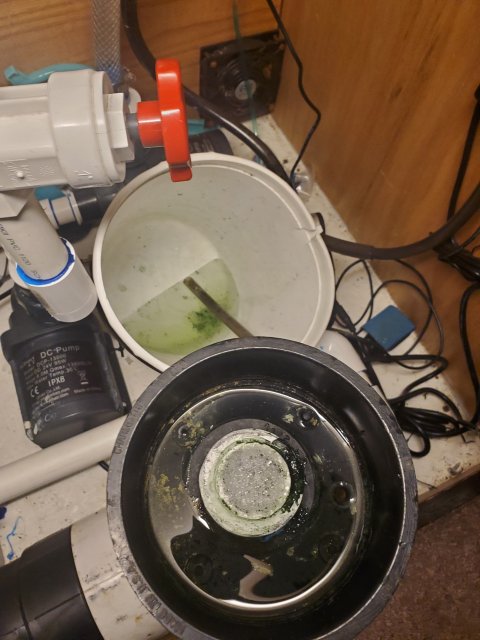 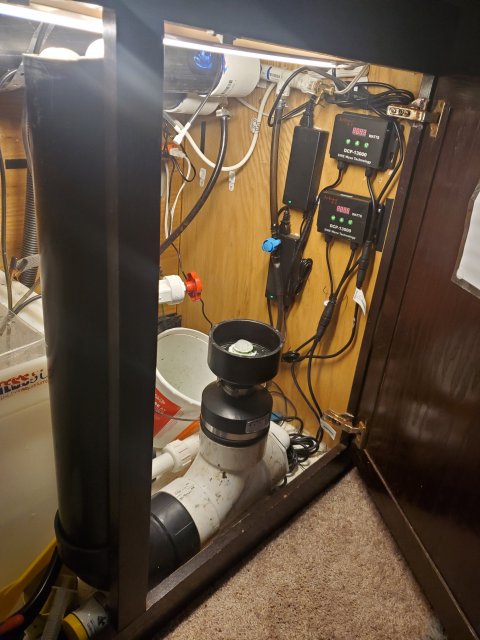 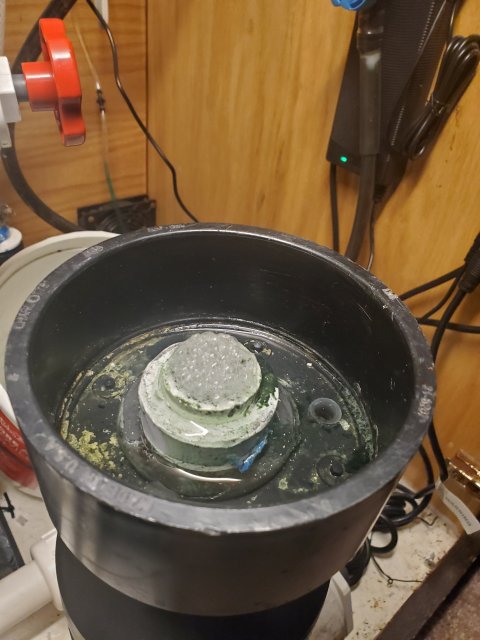 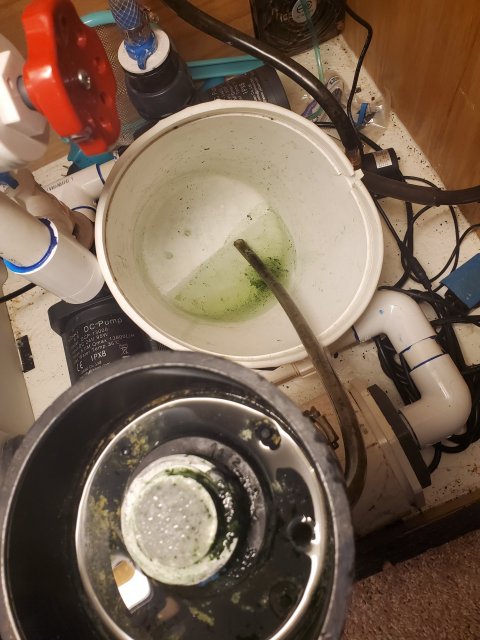 I just put a aquamaxx ts-3 sulfur denitrator on my 600 gallon cichlid tank and i love it I don't get why more people dont use them. I was processing 14gpd with no nitrate and I am now just bumped it up to 20gpd. It is way more than a drop or 2 a second. All sead and done i am in to it for $450 but for a smaller tank it would be less. I think the reason this one works as well as it dose is because it recirculats the water. So there is 2 pumps one to feed it and one to Recirculate the water. I had a 3 inch pvc pipe filled with seachem denitrate and I could never get it to work tryed all different flow rates. With as much as they Reduce nitrates they pay for them self between supplements and water. Just think if you could add 5 to 20 gallons of 0 nitrate water to your tank everyday. It is like haveing a continuous drip water change system but not needing the drain or feed line. The sulfer last a year or 2 and the Calcium is about a year.
Reactions: dr exum
T

twentyleagues said:
In my salt days I used an aquapure and ended switching eventually to biopellets and a reactor. Ive often wondered if biopellets would work in fresh. Itd be nice to see a more detailed step by step set up walk through of your system. I think itd help alot of people understand how it works. Nice work!
Click to expand...

Bio pellet will not work in freshwater because you need a skimmer or other way to remove the organic in the water.

This is a pretty late reply but may be useful for anyone reading this. I honestly believe the sulfur denitrators are more effective at a large scale. I ended up just doing a 50% weekly water change on my 180 gallon tank and shutting down the nitrate reactors due to the high maintenance. It seemed to have far too many small issues with the flows and slime and every time I thought I had it fine tuned, the flow would change after a few weeks requiring me to retune everything, making it more of a hassle than its worth. I believe the horizontal layout of the pipes holding biomedia was to blame for most of the issues, and a single vertical pipe containing the biomedia is the most effective design.
My initial design for my 70 gallon tank worked flawlessly for well over 18 months until I had to take the down down to redo the seams.


I am moving to a ranch where I will be using spring water as my main water source, while I haven't checked the nitrates out of the tap yet, I suspect there to be high levels during the winter months so I'm going to have to find a way to deal with that, I will have a 250 gallon , 180 gallon and probably my 70 gallon tank that will all need to run reactors.

I think I'm going to try a sulfur reactor for the 180 and 250, I think at a larger scale there is less waste and complications to deal with. Sounds like they just work more efficiently. Ill be bringing this thread back to life over the summer with some of my experiences after I move.
Last edited: Apr 5, 2021
Reactions: Raka, BIG-G, twentyleagues and 2 others

I've noticed that anytime I've used a reactor such as this there is constant fiddling with output flow control to keep it working optimally. I used one years ago on my reef setup that needed carbon in the form of vodka or sugar water injected into it. I think that was weekly and output fuss was everyother day. Once I switched to biopellets it was much easier. Yeah I still had to adjust the flow every week or so but no big deal. The biopellets were way more efficient also.
T

twentyleagues said:
I've noticed that anytime I've used a reactor such as this there is constant fiddling with output flow control to keep it working optimally. I used one years ago on my reef setup that needed carbon in the form of vodka or sugar water injected into it. I think that was weekly and output fuss was everyother day. Once I switched to biopellets it was much easier. Yeah I still had to adjust the flow every week or so but no big deal. The biopellets were way more efficient also.
Click to expand...

The way I have mine set up is with an orp metre And vx one peristaltic pump. With the orp meter you can see in real time what is going on in the reactor and with that pump you can set it in I think 0.1 ML increments I don't go that low but this makes it very ez to set the flow. I have 2 reactors with water flowing out of them not dripping and I still need to do a water change now every 2 to 3 months not that the fish are getting bigger and haveing baby's. I have a drip system set up so I just turn it on 5 to 6 gallons per hour and leave it for 2 days or so. If it was not for these reactors I could not keep as many fish as I have. My nitrates never go above 30ppm but it is more like 5-20ppm and for fresh water that's not bad.for the first time ever I had to take the hose off and clean it but most of the stuff was in the vavle. Not bad for almost a year. I will say patience is key with these as you need to make very fine adjustments.
Reactions: BIG-G and twentyleagues
You must log in or register to reply here.
Share:
Facebook Twitter Reddit Pinterest Tumblr WhatsApp Email Link
Top Bottom