So our gulper cat (named Puppy) got ich, presumably from feeder goldfish, and we treated it with "API super ich cure" active ingredient 1.3mg Benzaldehyde Green and 1%PVP per 5ml. My SO did the first treatment so I dont know exactly how much he added, but I know he knew he was supposed to do a half dose and I trust him. It's his fish and he's careful. I did the follow-up treatment 48 hours later, per the instructions on the bottle. The dosage is 5ml per 5gal and recommends half-dosing for scaleless fish (like gulper catfish). It's a 75gal tank so I did 37ml. When I did the dose, Puppy was already looking a lot better, though still had some ich spots remaining. The next morning, his whole body looks like its sloughing off its skin... its scaring me. I've never dealt with ich before so I don't know if this is normal or much worse. Does anyone else have experience with treating ich with gulpers or scaleless fish? I don't have any before pictures of Puppy, but this is Puppy now. 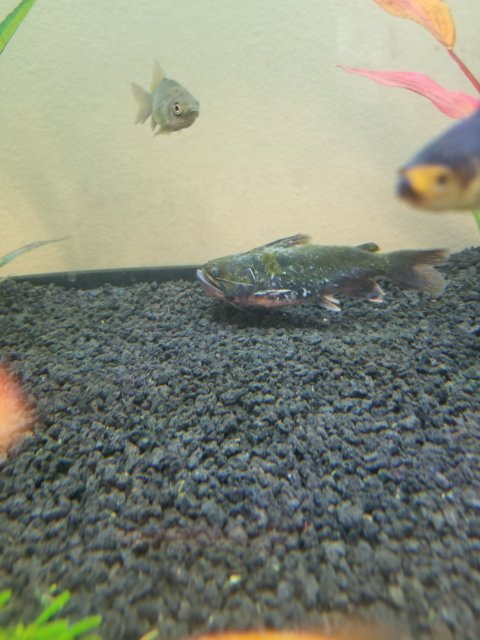 An older "before" of Puppy after a big meal 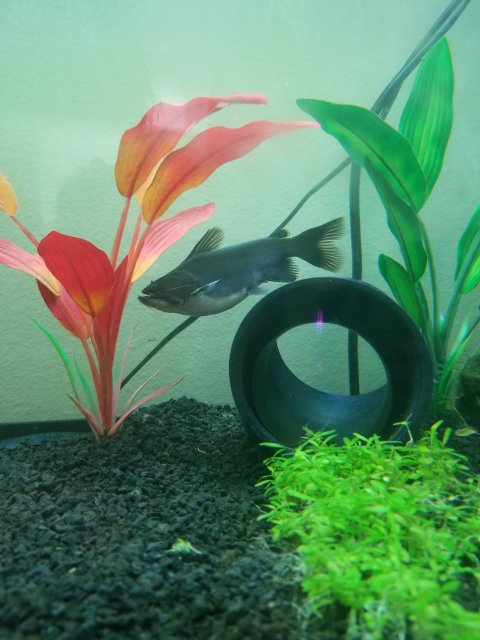 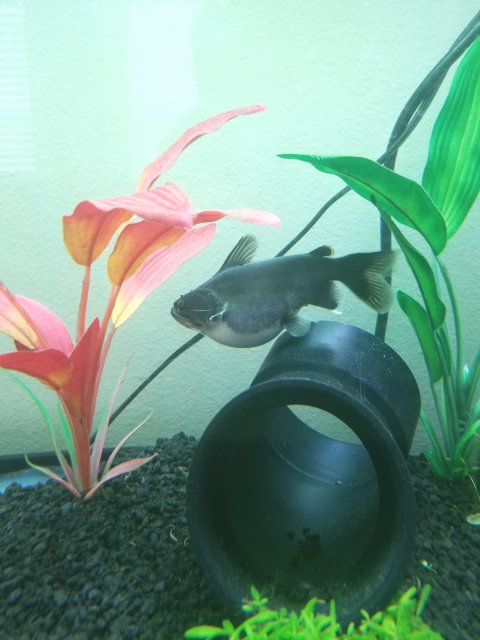 Next time try to stay away from the meds and raise temp and add salt. The ich will eventually die off. Try to pay closer attention so you can catch the disease before it gets so bad.
A

I'm pretty sure it popped up practically overnight or just over one day. We watch Puppy every day, multiple times a day. Things have been busy lately, but no more than 24h went by before he went from normal looking to very obviously infected. We may have been too shocked by the quick progression to have done salt and temp increase even if we had known about it. I personally prefer to avoid meds if reasonable, but I've done salt treatments for other freshwater ailments in the past and they've never worked fast enough before the fish died (and I mean we caught the issue within the HOUR it showed symptoms), and Puppy has a special place in our hearts, so we wanted it fixed quickly... but now it seems so much worse.
A

Correction, a salt treatment has worked only once for me, but the fish never Fully recovered, and died 2 months later when the same issue came back with a vengeance.
B

Artemiseus said:
Correction, a salt treatment has worked only once for me, but the fish never Fully recovered, and died 2 months later when the same issue came back with a vengeance.
Click to expand...

You have to be patient with fish disease. I know how you feel wanting to cure the fish as quick as possible but sometimes it just doesnt go like that. I'm not trying to make it seem like you weren't observant enough but sometimes ich pops up as a few spots at first or their behavior may change a bit. You also have to keep the temp up for weeks and eventually the ich will die because its life cycle just cant live at those temps. I'm pretty sure also that you dont want to half dose medicine with ich as it can make it stronger or more resistant to the meds. I know that catfish may be sensitive to the meds so that's why I say try the salt and heat. Also feeder goldfish just suck. You should attempt to get the fish eating anything else. I've successfully done it with every type of catfish I've owned.
Reactions: thebiggerthebetter

I agree about feeder goldfish as the most dangerous food to feed. Every time you put a feeder into the tank, it is a potential disease carrier. So unless you want to be treating for ick every week for the rest of the fish life, stick to safe food like pellets.
A

I know the feeder fish suck. I'm not a fan of it either, especially the whole thing with goldfish carrying thiaminase. However, Puppy won't eat pellets, he just spits them out. Even the good stuff. It's also my SO's fish, and half the reason he got the fish was the excitement he gets from watching him eat prey. I might be able to convince him to switch to frozen foods after this whole fiasco, but we've been feeding feeder fish since we got Puppy 5 months ago, and this is the first issue we've had. Right now my main concern is the skin sloughing off.
Reactions: thebiggerthebetter

Welcome to the MFK!

There is a stickie thread in this forum on the feeding live feeder fish. You'd benefit greatly if you read it, just as if you read the ich-related stickies.

The gulper is overproducing and/or shedding the protective mucus layer, just as most fish do under stress. It's not skin. With the ich and the med, it's kind of expected. It's the same mucus layer that protects your throat, nose, etc.

As with any med, it's a game of balance - gotta sicken and kill the pathogen while not doing the same to the fish, both living breathing organisms.

It's not the temperature that kills ich but the salt that dehydrates the parasite, literally pulls the water out of it by osmotic pressure because the water outside of the parasite contains more salt than the water inside of its cells. Temp only speeds up the life cycle to help kill it off faster with salt.

IME and IMHO, half dose for scaleless fish is a myth and I treat all my finned pets, scaled or not, with the same dose, always have for the last decade. And I am a catfish hoarder.

It is relatively easy to convert a gulper to frozen feed. Harder to pellets but if he mouths them, he WILL swallow them eventually when hungry enough, chances are.

Finally, gulper is a fish for the highest level of specialist. 99.99% of them people fail to keep alive and well for longer than a year.

Finally-finally, there are two schools of thought on feeding live (even if the feeders offer good nutrition and carry no disease). I subscribe to the one that says this is inhumane to the feeder, which cannot get away or outwit the predator as they can in the wild. I also believe that letting your children do so pets and encourages their sadistic inclinations but this is just my $0.02.
Last edited: Sep 11, 2019
My DIY Public Aquarium build http://www.planetcatfish.com/forum/viewtopic.php?f=4&t=33968
Vids & pics on MFK http://www.monsterfishkeepers.com/forums/threads/fish-story-aquarium-and-rescue-naples-fl-two-4500-gal-13x13x4-5.603969/
My databases http://www.monsterfishkeepers.com/forums/threads/two-databases-longest-f-w-fish-rating-f-w-fish-by-continent-and-family.660258/