Update on my Severum Chip

In other threads I've posted about the recent incident with my Severum. Long story short, his head was bitten by my Oscar. Severum has been a major ass for months. Chip hasn't been the same since, to put it straight. He was healing well, even showing some of his @hole fiestyness with the Chocolate Bobo. However he was jittery and protective of his head. More recently he's stopped eating or barely eats. He's clearly afraid to contest for food or expose himself. Most of the day he would stay in the upper column (forced there by the BP) or sit in the plants. So after initially improving its gone in the other direction. I think he's a mental wreck by his body language. If he sees the slightest motion or a shadow in his side vision he takes off.

More importantly his scars from the bite have opened up. He can't shake his lympho dots and two new spots are on his nose where his face was 'scrubbed' during the time of the bite. The scars from the bite itself enlarged again. I noticed today he has one eye slightly swollen...the 'white ring' around it drew my attention. I checked it closely and its clearly swollen from a recent injury (likely a scrape since he has one on that side). The only good news is that he swims much more normally now and has stopped the 'head standing' he would do for hours.

I haven't seen any outright aggression to the Severum recently, and this includes watching the tank when they were unaware. Just small posturing, no real fighting.

Right now he's in quarantine in a weak salt dip and has perked up, returning to his silver/stripe appearance (he's been black for weeks). I will start treating him with Tetra Life guard tonight and continue for 6 days to see his progress. At my wits end with this fish.
Reactions: dr exum and Proteus

For his health he needs to be moved. Its plain to see he is terrified of Brick now and will continue to be stressed and susceptible to illness, that could then spread to the rest of the tank.
Reactions: dr exum, Proteus and Magnus_Bane

Agree. I think this is 90 percent stress related. The Oscar terrifies him and he's constantly stressed by the BP. I'll have to work on a back up plan.
Reactions: Proteus and Jexnell

Currently Chip is in a 'drip' bucket with aeration. He'll get a second treatment tonight. That puffy eye looks like a prizefighter after 8 rounds. Mild salt dosages inbetween treatments during the drip.

LOL Chip refuses to let me get a good look at his eye...if I try he keeps turning his head to hide it. So far it seems stablized.

LOL that's what I'm getting.

Going to need some advice here.

Chip is healing from his other wounds with the Tetra Lifeguard treatment. But I'm concerned about his eye. Not sure whether to concentrate treatment on the eye for now and suspend using the Lifeguard. I'd also like to try to get him to eat. He seems to be able to see out of it and the pupil is still visible (no whiteness). But for obvious reasons he can no longer move it. I've got epsom salt on the way which should be arriving tomorrow. The aquarium salt made it even worse (nearly bulging out of the socket) I immediately added fresh water and it went back down to what you see in the pictures. I'm not sure if this will resolve with clean water/time or what. I have ich treatment. I've heard methylene blue is effective against eye infections? I was thinking a swab on the eye.

A couple of pics of the bum eye: 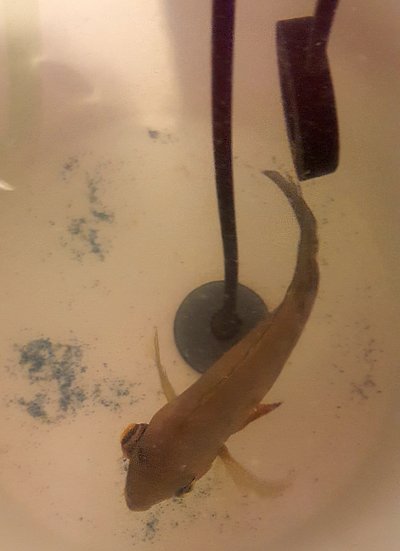 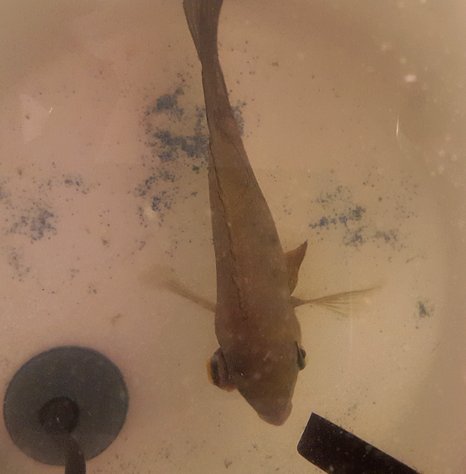