I'm hoping not to take too long doing this as I need the larger tank fairly soon...life still wins out though. In this project I'll hopefully be cleaning and resealing an old Metaframe tank that I picked up on Craigslist for $50. It's 100g and HEAVY. I'll also be building a stand for it and a sump and that part of the DIY will go into this thread as well.

Before I got it, the tank was left outside for several months at the minimum. It would hold water to about the halfway mark, but no higher. Here are some pics of the tank as I found it: 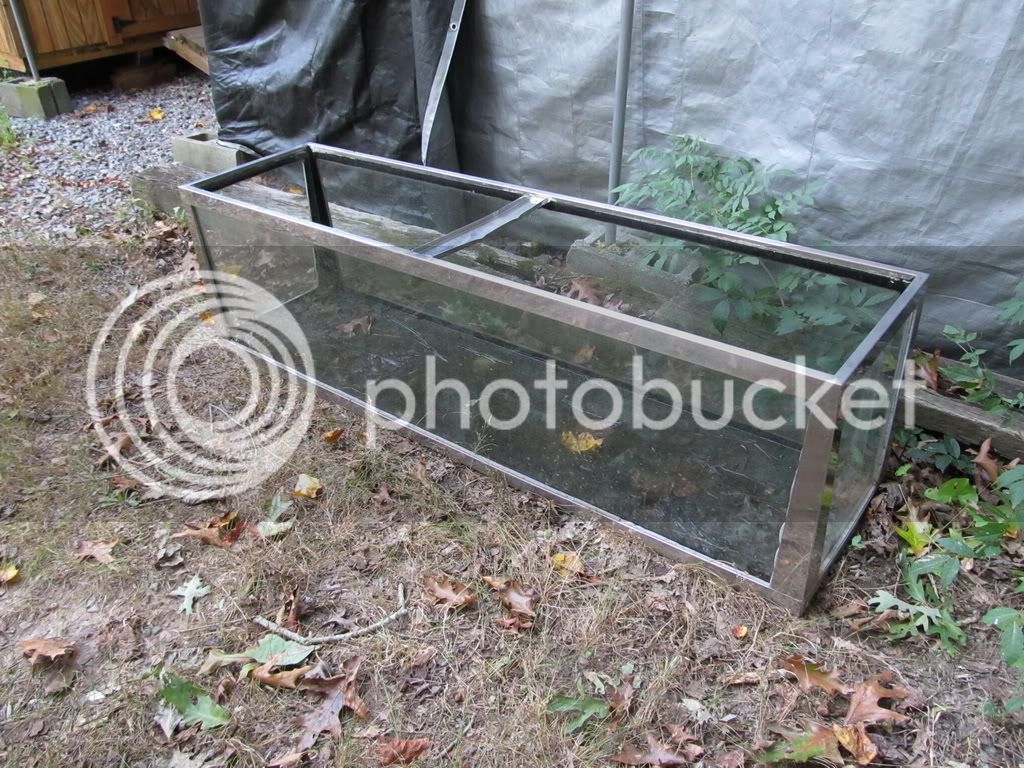 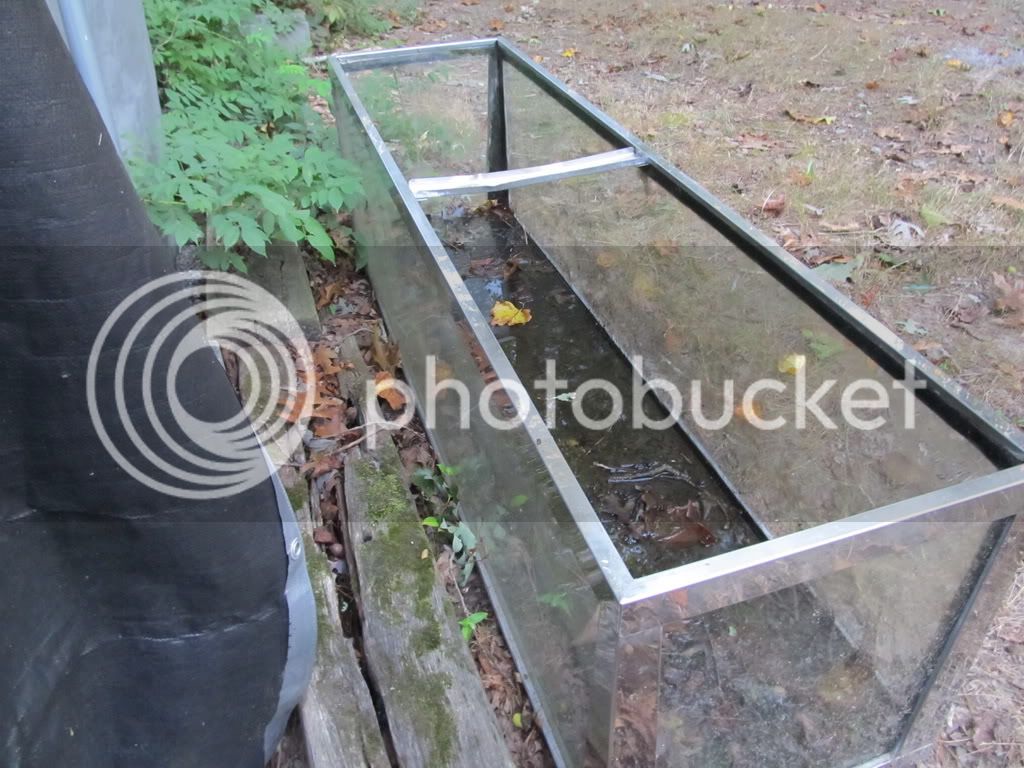 After getting it home, discovering it leaked (not too surprised), rinsing it off, and getting it up on some sawhorses, I took a couple more pics: 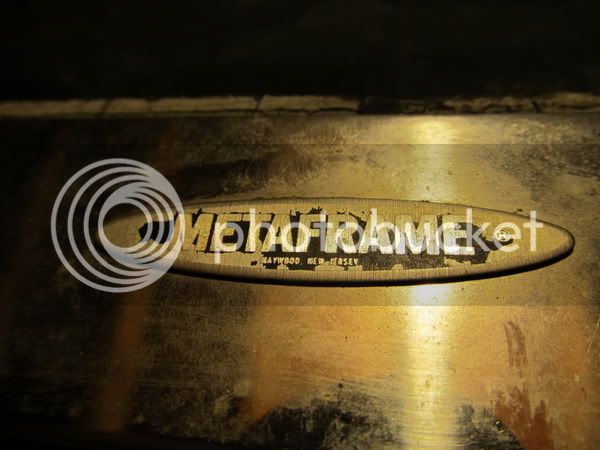 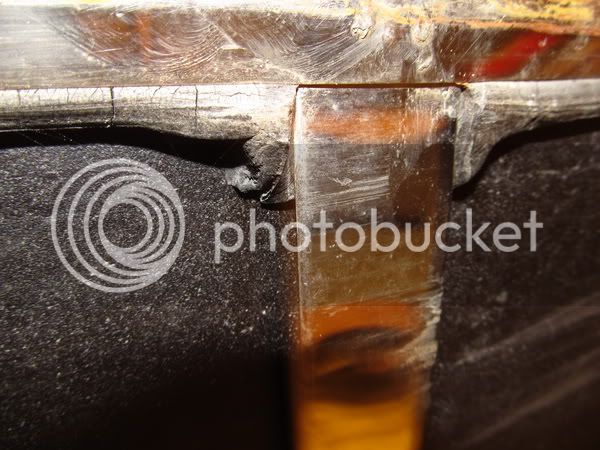 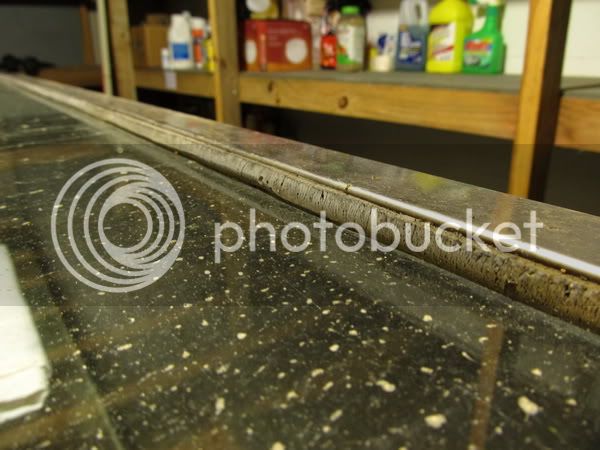 Next came some actual work, and this is where I will say thank you to all who talked to me before I began this project. It would also be appropriate to say here that deeda was correct in that what looked like old RV window and door foam was actually some of the original tar sealant, but very dried out. 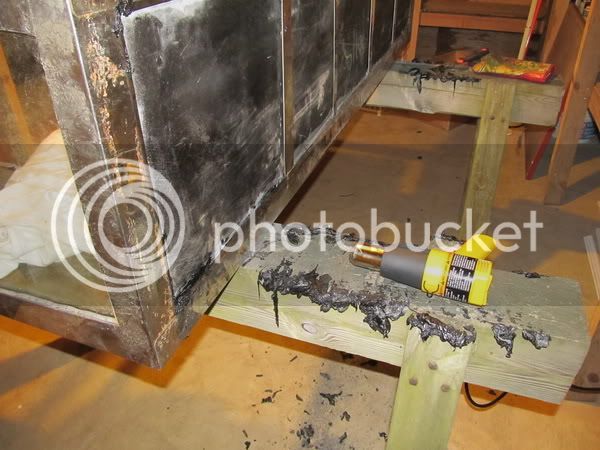 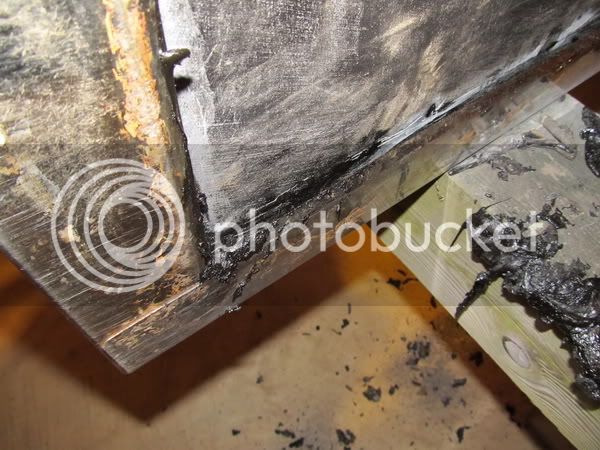 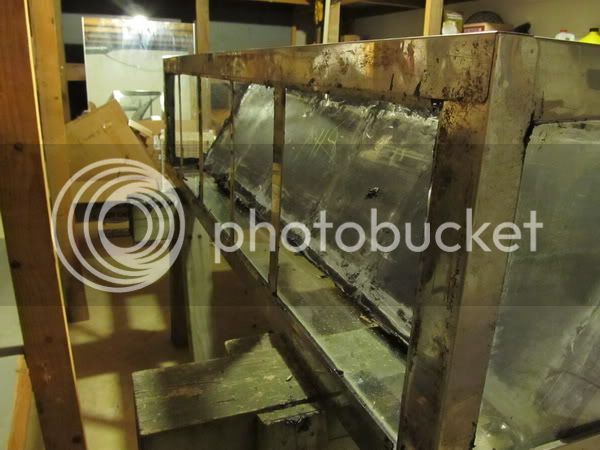 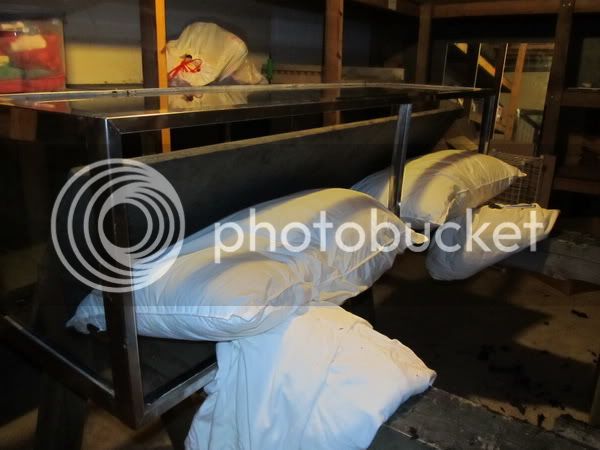 And, of course, being very tired and up entirely too late, I tried forcing the slate out before doing a few other things. The result was predictable: 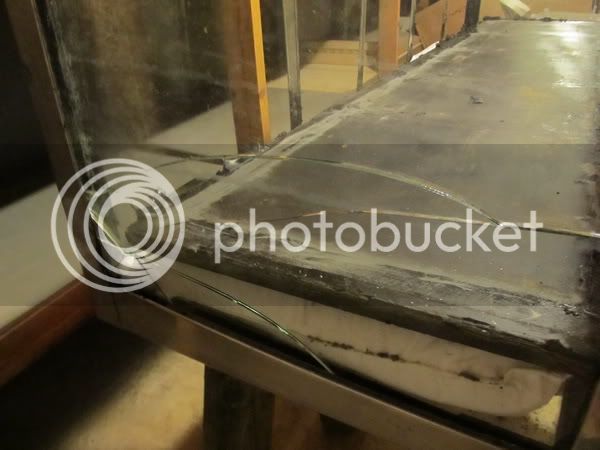 This is where I'm at now. I should be able to work on this a bit more tomorrow and hopefully a decent amount on Friday.
Wife: "You are not allowed to look for new tanks for at least another two weeks."
Me: "But honey, I'm only looking to see if there are any worth getting just to re-sell..."
G

I didn't get much done today, but made some progress nonetheless. Both the broken piece and the other good end-piece of glass have been removed: 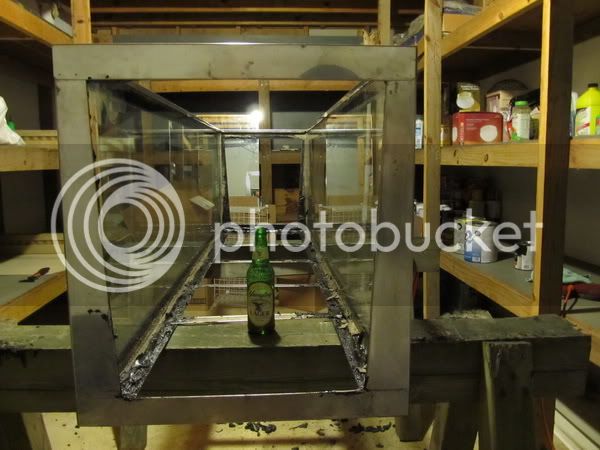 And the slate has been fully removed from the frame now. Yes, that beast is 3/4" thick: 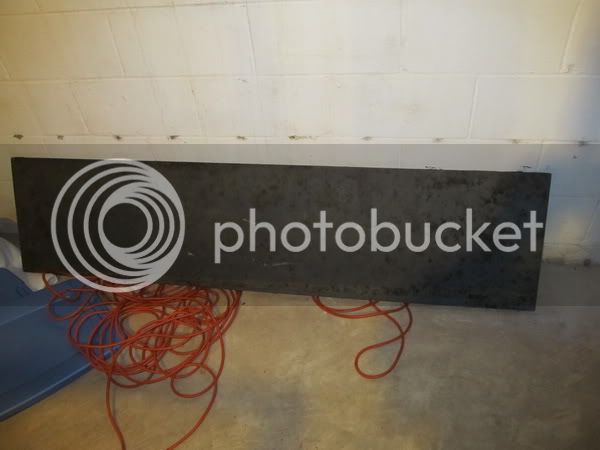 I'm guessing one or two of you have been wondering why I went through all the hassle of tearing this whole thing apart instead of just placing another piece of glass over the slate and sealing the inside. Well, here's why: 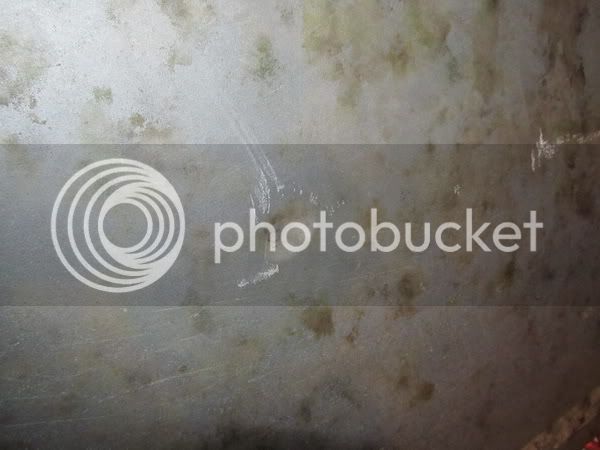 That dent is right in the middle of the slate and about halfway through. I figured if I simply put glass over it, the glass would have a single point where it wasn't backed by even pressure. Glass does well when pressure is evenly distributed, such as when just the corners are supported, or the entire bottom, but pinpoint one place and not the rest, and I figured it'd just shatter.
Wife: "You are not allowed to look for new tanks for at least another two weeks."
Me: "But honey, I'm only looking to see if there are any worth getting just to re-sell..."
H

Oh my gosh I can't believe you got that thing for $50. I didn't know they even made them that big. And it's a pretty nice shape too.
Ripariums on Facebook

Stop by and Give This New Page a "Like".
D

Looking good though I'm sorry you cracked that end piece. I struggled doing a 10G by myself so I can't imagine how difficult the 100G is to do.

Another recommendations I found was to put a new piece of glass UNDER the slate and seal it to the other 4 panes. You would then have to trim the slate to fit loosely in the bottom of the tank. I will try that method eventually but not this year.

Thanks for the updates. Just take your time and do it right despite needing to set the tank up soon.
Dee

Well, my mother-in-law dropped by so I didn't get to spend as much time on this as I'd hoped. I did manage another two hours though during which I managed to remove the back glass. I'll never complain about how much of a pain putting a new plastic rim on a 55g is again. That tar, and the amount they used, gives me a whole new respect for older tanks. I'll snap some more pics tomorrow and hopefully get the last piece of glass out then as well.
Wife: "You are not allowed to look for new tanks for at least another two weeks."
Me: "But honey, I'm only looking to see if there are any worth getting just to re-sell..."
N

Sorry I haven't been able to work on this. Strep throat will do that to you. I'm nearly well enough to begin again though; in fact, I hope to get some done tomorrow.
Wife: "You are not allowed to look for new tanks for at least another two weeks."
Me: "But honey, I'm only looking to see if there are any worth getting just to re-sell..."

Very cool. I love metaframe tanks. I saw a 125G metaframe on craigslist and it took every ounce of my will power to hold back from buying it. Good luck putting that thing back together.
770 Gallon Build Thread
S

very cool, I can never find those around here!
"Nothing suffocates you more, than the passing of everyday human events."
G

Luck just isn't with me quite yet. I'm finally back on my feet health-wise, but I had to fix the pool as the cover came off and dumped a whole fall's worth of leaves down into the water (I suspect kids' involvement). Once I got that done and started working on that last pane of glass, my scraper tool slipped and dug the point down into the bone of my middle finger on my left hand. It'll live, but it put an end to tonight's project in a hurry. This last pane is hard to work with as the frame is now pretty unstable without the other panes and I don't want it to flex too much. Pictures of the finger, the burn that's been healing for the last week from the heat gun (this happened the same way as tonight's stab-wound), and all progress tomorrow night.

1) Figure out the best way to remove all the tar from the stainless steel frame
2) Order the replacement glass - I've been holding off to make sure I don't break anything more and to see the final condition of the existing panes
3) Order the new sealant - should be done tomorrow as well
4) Clean everything up
5) Put it all back together again
6) Water test
7) Build stand
8) Build sump internal structure (a few changes here)
9) Put everything where it's supposed to be and level it
10) Plumb everything in
11) Cycle
12) Add fish
13) Figure out what I'm going to do for lighting as I haven't found a Metaframe hood to convert into CFL and T5 lighting, which is supposed to be what's happening
Wife: "You are not allowed to look for new tanks for at least another two weeks."
Me: "But honey, I'm only looking to see if there are any worth getting just to re-sell..."
You must log in or register to reply here.
Share:
Facebook Twitter Reddit Pinterest Tumblr WhatsApp Email Link
Top Bottom