g_morin said:
Yea its slowly getting there as I am adding stuff from week to week so its not a bunch of money at once to keep the wife at peace...
Click to expand...

So in this time you can goto the local fish store where you are going to get the fish and look at them. In person fish look different from pictures.

For the cichlids I would pick from the Amatitlania family. The common Convict (Amatitlania nigrofasciata) HRP (Amatitlania siquia) Yellow Convict (Amatitlania Nanolutea)
Most people get 6 individuals to grow out and let nature take its course. When you get a pairing remove the extras.
But we are talking Cons basically water rabbits. The first two on the list are easy to sex as the female has an orange belly where the males don't. The 3rd one Nanos, female have a black spot in the dorsal fin males don't. Kinda hard to see if the fish are 1/2in or under. When they get past an inch becomes more evident.
There is a saying with cons...
Get a male and female add water bam babies
Worked for me got a male and female, three days later we got eggs. So you may be able to skip the get 6 and let nature take its course step if in store you see a pair already formed laying eggs. Or could do as I did and gamble by getting a female and male over an inch in size. Makes typically run bigger than female in size so by time the females hit an inch the males are 1.5 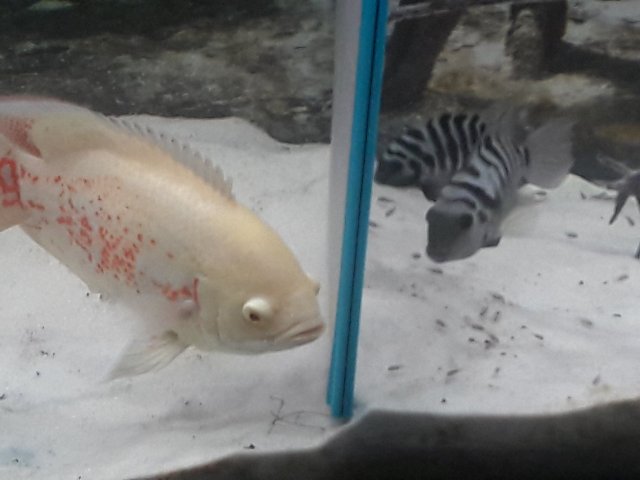 For cats I would pick Flagtail Porthole catfish (Dianema urostriatum) as they are a little more flashy looking with t h.g e black/white stripped tail. I would go with three.
So for the upper column you can go with Plattys, Swordtails, Molly's as they are found with livebarers in the wild. Check your store for color varieties that would go well with you cichlid pick. I would get 6female and 1male.

Fishnerd360 said:
Unless you have lots of hiding spots, the shrimps are most likely all going to get eaten. At an aquatic show, I saw inch long dwarf cichlids going after a shrimp the same size.
Click to expand...

Not a super exciting set up and not predator at all, but I’ve got that tank (45g) with some bamboo shrimp, 4 little loaches, 2 pleco, and 14 swordtails ( I did not purchase....)

shrimp n community fish can work - but as the others said maybe not good with the cichlids... I like the “meals of wheels” line...

dwarf cichlids, Amazon puffer group, Congo puffer, could be a 1” rhom in there for years...

I do appreciate the input... I definitely have to see these fish in person to see which are going to be most visually appealing for the tank.
MONSTER CICHLA LEAGUE #19
150 Gallon

BACK TO CICHLA!!!!
Reactions: dr exum

Ac110 is the filter in the 45g tank? Reason I am concerned. Its alot of current for a narrow footprint. I used them on purpose on my 55gs for plecos. Two of them on a 55g

Don't ever forget who you are.

Proteus said:
Ac110 is the filter in the 45g tank? Reason I am concerned. Its alot of current for a narrow footprint. I used them on purpose on my 55gs for plecos. Two of them on a 55g

Like I said... plecos. Rummynose tetras do not like current. They are from the slow moving parts of the river. I know. I worked with rummynoses as the canary of my fish room. They did not like currents in the pleco tanks they struggled so didnt keep them in that type of tanks. And i bred them.

I have one AC110 on both of my biggest tanks 112g n 75g and all of the tetras are hanging out at opposite side of the AC110 out of current zones 99% of the time. They use vertical current at times as a gym to workout their fins as current is crashing downwards and upwards or grabbing food. I use that as an advantage breeding plecos at a certain angle of the rebound of current as i like that angle to work with to get them to cooperate. 2 biggest clown loaches in the 75g hang out in the cave driectly where AC 110 current rebound to more horizontal angle on bottom part of the tank. I set up caves and hiding spots for the loaches for that specific reason in that zone until they are moved out to the bigger tank.

The clown loach growout 112g tank also has fx4 i will be upgrading to fx5 or fx6 soon for the loaches who thrive in current. The fx4 has directed current zones that is more natural driection of flow horizontal versus vertical flow. The tetras and barbs still avoid that AC110 current zone in the upper/mid column in the entire tank and swim against the current output from the fx4s for fun. Got to think on the space the fish will occupy most of the time.

To the OP hope this makes some sense. You have alot of options but bigger fish is out due to narrow footprint. Ac110 current flow on the 45g as well.

Cheers
Save the Aye-Aye