Tank Size: 40 Breeder or 55 Gallon good for single, 75+ for pair, though bigger is always better. Sand or Gravel is good, driftwood with robust plants, plenty of hiding and swimming areas

Temperament: Somewhat aggressive especially when breeding, though not as aggressive as some Central American Cichlids

Feeding: Eats most anything, loves raw shrimp, but needs some vegetable matter 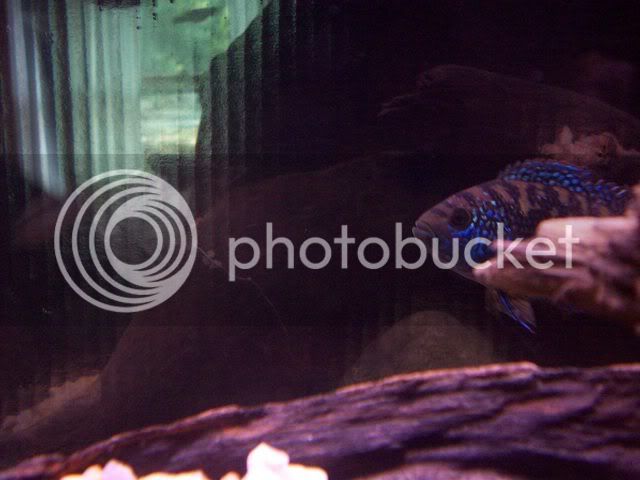 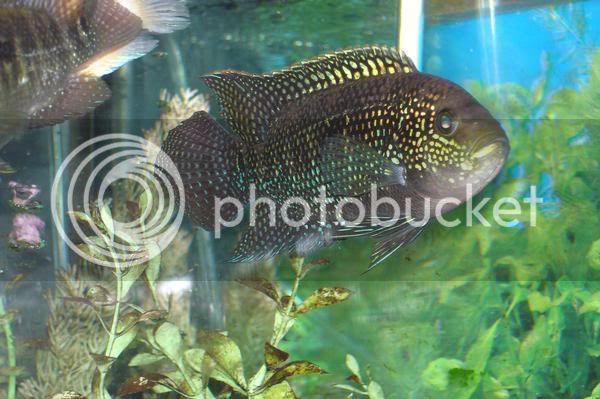 Tank setup: Plants, rocks, driftwood, sand and a twenty gallon long tank would be great for a pair. they like planted tanks and would not eat the plants.

Temperment: when breeding may be territorial to other small fish and sometimes two mature females will kill each other. one pair per tank is deffinately recomended except of course if the tank is over 3 feet long.

Diet: same as other apistos mentioned on page one.

General comments: the male and the female of this species is striking. few other fish have the georgeous fins the variety of colours, the gentle mouth, the small size and relative peacefulness of this fish rolled into one small scaly body.

Sexing: While young it can be very difficult to sex festae, but as they mature females dorsal fin will turn black and they tend to show more intense red colors, while the males will generally have much more blue spangling in the fins.

General comments: festae are extremly aggressive fish when they are mature, butt they tend to be rather timid when they are young. They are also extremly slow growers. Best spawning tip is to gradually drop the water temperature into the low or mid 70's and then raise it back up as this immitates the cool rainy season. Not a "glassbanger"
D

Anatomy
When juveniles the dorsal splotch method is best for determining sex. The female will have a dark black/blue splotch along the front portion of her dorsal fin where the male will never have this marking. They become sexually mature around 4.5" with the male showing green to yellow throughout his body with a deep red throat. The female has similar markings, but has a unique striped pattern breeding dress when spawning. Both will have spots on their body at least one by their eye one in their middle body area and one near the tail hence their common name.

Tank setup
A six foot tank with at least 18" in width is recommended for these large robust cichlids. Sand is ideal for these diggers, but due to this make sure rocks are secure. Large smooth rocks and plastic plants can be used to offer ample cover. Water parameters is not an issue with these cichlids due to their natural habitat is so varied makes them a great tolerable and hardy fish. However a strict schedule of weekly water changes is a must for these messy eaters. Another must is adequate filtration turning the aquarium at least 8-10 times filtered per hour for these large fish. If given ideal conditions with good water quality and a high protein diet expect tall thick bodied specimens with lots of red on the fins and throat.

Diet
A good pellet food should be the staple, but occasional feedings of shrimp, crickets and earthworms will be greedily consumed.

Compatibility
Another great candidate for a wet pet or mated pair due to their extremely aggressive nature. They are regarded as one of the brutes of the Central American cichlids and when mature they are quite powerful and robust. Tank mates are a gamble, but similar disposition and size is a must for it to be successful. The Trimac is a true glass banger.

Breeding
Typical cichlid spawning with the two cleaning off a smooth rock or slate. They lay their eggs and they hatch within 3-5 days. Within the week from hatching they will become free swimming. The female guards the eggs or fry while the male patrols the perimeter. The Trimac is extremely aggressive when breeding and care should be taken for tank mates or hands in the aquarium. 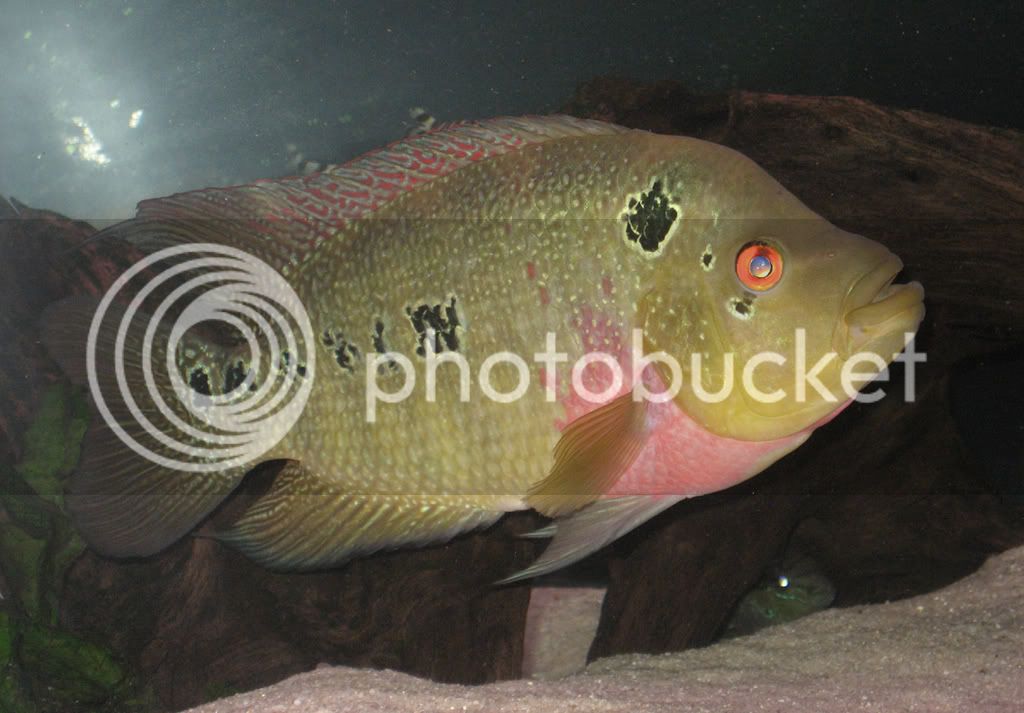 Guys this is going GREAT!


Species: Crenicichla Sveni (South America)
Size: Largest I have seen is 10"
Tank size: These guys may be able to be kept in a 55! I know this question comes up a lot, and I always recommend Sveni for that tank size.
Behavior: I have made some peculiar observations with this species...I have noticed that they like to form symbiotic relationships with frequent egg layers...When in a crowded setting, the high volume egg layers get stressed while other tank mates eat the eggs. The sveni protects the egg layer, during the egg laying process, and then is rewarded with all the eggs he can eat. In return, the sveni collects food for his symbiotic companion, and either spits it directly out, out engorges himself, and passes the food at a rapid pace, so its nutrition and flavor is still intact. The egg layers stick by the sveni's side and vice versa...The pike seems to be in protect mode at all times, with his partners!
Parameters: The Sveni likes soft water. They come from slower moving water as well. Temperature seems to not effect them much. 75-86 and they behave the same. I have not bred this species however.
Diet: They readily accept prepared foods, but they are ambush preditors...I breed fish, so there are many live treats for my pikes.

Dovii, or wolf cichlids, are known to be kings of cichlids; they get large, have teeth and have amazing personalities, so many people like to keep them- But not all people have the captive requierments to keep the king of cichlids. Listed here are the requirements too keep this awesome species into adulthood. These fish are found in Central America.

Niceragua and Costa Rica are the most common areas where Wild Dovii (F0) are Collected from.

Fish size- males can get to 30 in the wild, though captive specimens rarely get larger than 21-24. Females get to around 15-16

Tank size- because of the large size of these cichlids, and because they are very active cichlids (VERY) sometimes listed as a somewhat Psychotic fish by keepers, large tank sizes area a must, minimum for females is 125 gallons 6'x18"), males on the other hand need 180+ gallons, pairs may work in 180s, though to be on the safe side, 240 gallons would be much better, because the footprint of 8x2, give much more space than 6x2. So If a male want's to beat on his girl, she has some space to stay away.

Filtration- the fish are large so good filtration is a must, for a tank like a 180, I would recommend a wet/dry filter or a few large canister filters- big fish=big waste.

Décor- because these fish are known to be very active, I would recommend keeping the tanks for them, as bare as possible, have gravel, and maybe a piece of driftwood, but they are fast moving and could hurt themselves, on any sharp corners, of slate or such. There is almost no chance of keeping any live plants with them.

Tank mates- these fish are known for being very aggressive so, tank mates, is pretty much a big no, though you may be able to have a pair together. Females are many times killed off by Overactive males though, so if you do plan to keep a pair, keep a VERY strong divider on hand. You would be suprised how strong an adult male dovii is when he want's his girl. I have also seen fish such as pleco's or catfish ignored by dovii.

Feeding- feed these how you would any other larger cichlid, large pellets, food sticks, etc are all good things to feed. Keeping a varitey is best. A meaty supplement of a large earthworm would be fine aswell.

Photo's by Jeff Rapps of TUIC)

Expand signature
"The Greatest Enemy of Knowledge is Not Ignorance, It is the ILLUSION of Knowledge. Stephen Hawking"

Tank Size: a 75+ UK g tank would be the bare minimum i suggest, as they are quite active and go on swimming out and upfront they don't usually hide, always out for food or fighting it out for territory.
Diet: carnivores and are like fishy dumpsters,i feed them ocean free pellets, food stick, dried shrimp, once in a while any meaty food like earthworms, beef heart, chicken heart.*they stuff themselves to such extents that their mouth remains open for a long time till they down their food*

Sexing: the males grow much larger than the females . the iridiscent color is more prominent in the males and they have more black markings like jags, and they have a little reddish tinge on the dorsal fin when juvies .

a few pics of the male 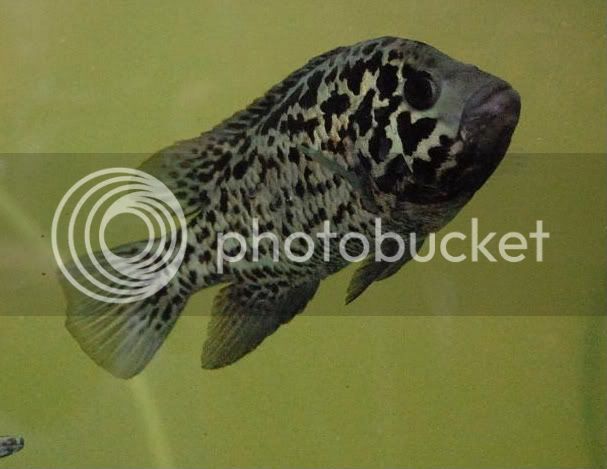 here is a pic of th female

Location: rivers and lakes of cuba

Water parameters: 24-30 degree C
PH at 6-7
not very choosy about water quality as they are quite hardy


these fish are really aggressive not only will they fight with each other a lot
they will also pick fights with larger fish(my 6" cuban used to pick fights with breeding pair of JKs(male was 10"+))
quite owner responsive too
Expand signature
TITLE --->"pics of hookers for the first time !!!!!"

comments:
1)Love the fish, congrats on having the worst title thread in MFK history...lol

i agree, away whith the fish base profiles we want this to be, based on your experiences, interesting read... and well, easy to read

:quote:lol i agree but hey they want text book profiles:quote:who said we wanted info copied from another site? mods please delete the copied info its cluttering this great thread! (and stealing all the fun of writing a profile)

Tank setup: for a breeding pair a twenty gal could suffice but a group of five in a fifty five gallon tank would be better. the like to blow into sand to blow out food but sand is not neccesary. tankmates must be chosen carefully and rummynose tetras and cories are highly recommended. apistos and cardinals will also work. be sure to provide lots of swimming space.

water perameters: for wild caught discus and for breeding the ph must be 5.6 or lower but domestic breeds will except a ph of 7!!! water must be very soft.
pic 1 show quality adult
pic 2 juvinile

Come on guys! start posting! i am running out of cichlids

Tank setup: A tank no less then 5 feet is recommended. it likes company of other acaroniasit likes to hide so provide refuges.

Diet: earthworms cichlid stix in brazil people use meat as bait and the are easily caught whith it but i doubt that meat would be practical or at all healthy. many foods will work it is best to experiment whith a variety of foods.

Tank Size: Pair would do well in 40G setup - larger depending on tankmates. Tank substrate must me fine gravel or sand

Sexing: My research tells me that it is difficult at best. May be some color variations when mature as well as some size in females(more round).