Can you keep blue gill in tanks outdoors over the winter?

I'm interested in starting an outdoors aquaponics setup. I live in Northern GA, where it can get to 20 degrees F on some nights in the winter. (The "record" says -17 F once, but I've never seen it below zero since I've lived here). I don't expect to grow vegetables all year, but I would like to make sure that there is a safe way to keep the fish over the winter, without having to bring them all indoors.

Are there issues with keeping them in tanks/aquariums above ground rather than in ponds that are large and deep that might have a more stable temperature?

Is it possible to avoid electric heaters?

Does anyone here keep blue gill or other native fish outdoors in aquariums or above ground tanks through the winter? What the minimum safe temperature? What do I need to be aware of?

I'm not sure exactly, but bluegill are native to most of the US, including GA, so as long as they are wild caught they should be fine year-round, considering it's pretty much the exact same climate as what they live in in the wild
Expand signature
R.I.P. King-eL, Greenaveli, fwlion, and more

Temperature swings would be okay, but small volumes of water do freeze quicker than big ones. If it gets cold enough, the whole tank could potentially ice up.
Expand signature
A wise man once said “There’s always a bigger fish.” That man’s name was Liam Neeson, unfortunately I don’t have enough respect for the movie to name it.
Reactions: xenacanth9, keystonewma and tlindsey 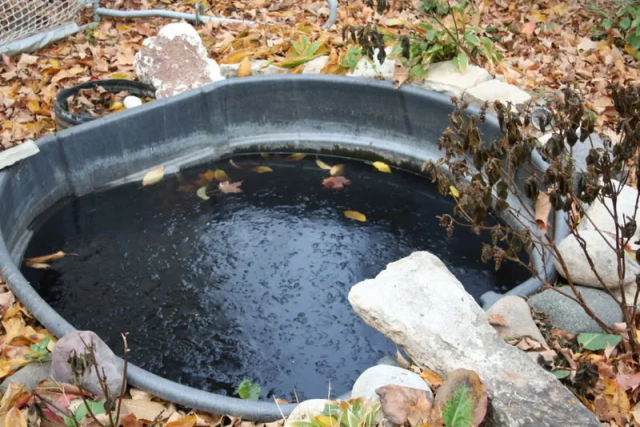 above is a 300 gal rubbermaid in mid fall in WI.
The entire volume of water would freeze solid to the bottom by late Dec in WI, temps in the 20sF.
Reactions: tlindsey and Deadeye

I would say yes, your winter should not be bad enough to be a problem. What kind of set up do you have? As long as it wont crack you should be good.
Expand signature
40G 3x Comet
180g Rainbow trout tank
29g salt Orchid Dottyback, Sixlined Wrasse, Azure Damsel
30gish (In a 55) Dace Stream Tank
Reactions: Deadeye

I grew up in Gilmer county.