I was asked by the admin on another forum to put the following article together and thought that some of the members here might find it interesting. Unfortunately the only real info one can find on this subject on the net http://www.loaches.com/articles/clown-loach-coloration-marking-variations .......... is incorrect.

I contacted the author of that article as I had assumed the single source that he had used to draw his conclusions, and I was correct, it was an old article that while for the most part accurate, was very confusing as to locations & names. He simply got his wires crossed, but unfortunately chose to leave his article as-is.

My sources were a bit more closer to the action, the main one being a collector & exporter based out of Indonesia. Hopefully some of the members here will find this information useful.


Chromobotia macracanthus, known locally as Ulanguli, are collected from primarily two geographical regions, Borneo Island, and Sumatra. There has been some confusion over the years as to which color variant comes from where, along with the mention of a Clown loach from Kalimantan that has more intense red/orange fins. In actuality Borneo and Kalimantan are one in the same. Borneo Island is divided between Indonesia (Kalimantan districts), Malaysia, and Brunei. The four Kalimantan Provinces encompass the majority of the island, and it is West Kalimantan where the vast majority of all Clown loaches are collected for the export trade. (primarily the upper reaches of the Kapuas River aka Kapuas Hulu)

It is in this region that the most colourful Clown loaches live. Overall the Clown loaches from Kalimantan are brighter, and have more vibrant orange/red coloration in their fins, as the water in these districts is brown water, with numerous black water tributaries. The water is high in dissolved tannins and humic acids which accentuate the reddish/orange colours in the fish. One can see a similar effect on the color of the native Red Arowana (Scleropages legendrei ), and Betta (Betta spp.), that are found in these same bodies of water in West Kalimantan.

Some of the best regions to obtain Clown loaches in Kalimantan are the districts of Pontianak, and Palangkaraya, while in Sumatra they would be Jambi and Palembang. (as per Irwan Utomo)

The photo below is of a 6-7 inch Clown loach that was originally collected in West Kalimantan. While the pattern of the stripes is different from what one typically sees in Clown loaches, the rest of its physical characteristics are what one can normally expect to see in fish collected from Kalimantan. 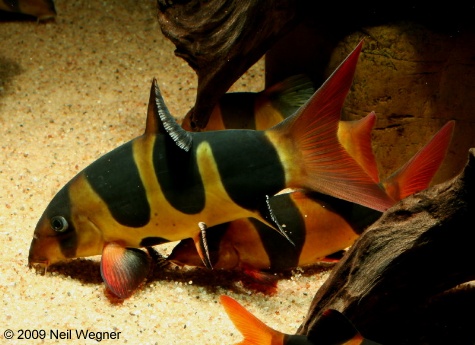 In Sumatra, the Clown loaches are less vibrant, have a slight silvery sheen to the body, and overall are lighter in color in comparison to the Kalimantan variant. (as per Irwan Utomo)

The photos below were taken by Irwan Utomo and Dusa Oka while in Sumatra, and feature Clown loaches that were collected in Sumatra. While the quality of the images aren't the best, I believe they are clear enough for one to see that Sumatran Clown loaches do in fact have some black in the pelvic fins, and they appear to have just as much yellow at the lead edges of their dorsal and anal fins as the Kalimantan loaches. In Kalimantan loaches it appears that the rear stripe extends onto the caudal peduncle, whereas in Sumatran Clown loaches it does not. Besides the slightly lighter overall coloration of Sumatran loaches, the rear stripe may very well be the most accurate way to differentiate between the two geographical variants. 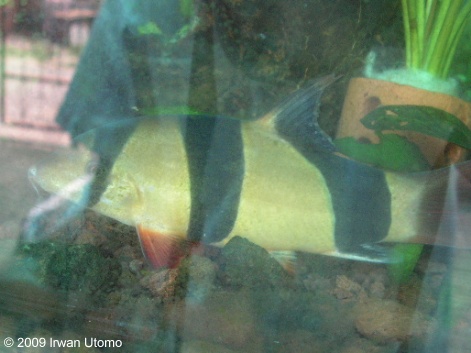 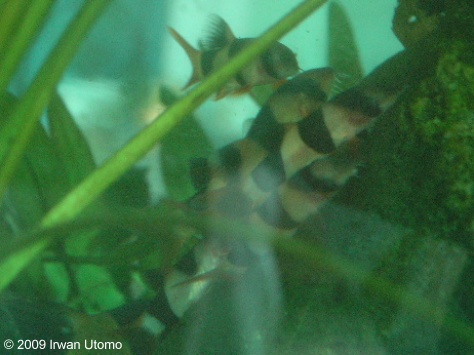 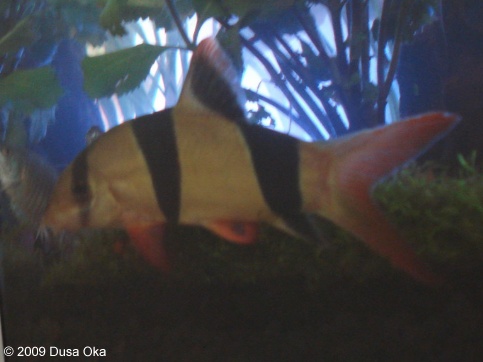 According to a paper written by Kafi Hidonis, there is in fact a large genetic difference between the population group of Sumatra and Kalimantan Chromobotia macracanthus. With Clown loaches now being domestically bred by commercial fish farms, comes the risk of geographical gene pools being crossed in captivity. With the overall coloration and patterns being so subtle between these two geographical variants of Clown loaches, I'm afraid that the possibility of an entirely new strain of loaches with mixed genes is very possible.


Also please keep in mind that overall coloration can be influenced by numerous factors, including diet, water quality, stress levels, lighting, as well as the age of the fish.

GENETIC DIFFERENTIATION AMONG POPULATIONS OF CHROMOBOTIA MACRACANTHUS BLEEKER FROM SUMATRA AND KALIMANTAN BASED ON SEQUENCING GENE OF CYTOCHROME B AND RAG2
Last edited by a moderator: Apr 13, 2016
Expand signature
He who dares not offend cannot be honest. - Thomas Paine
Reactions: MatteoTheEnder22, FIU Panther and jandb
N

So where exactly does the "caudal pedunkle" begin and end. Looking at the tails of the pictures above you have to have a pretty discerning eye to judge the two. Or is it just that close between the two? - N
Expand signature
Stop is the only 4 letter word that would fly..:lipsseale

So where exactly does the "caudal pedunkle" begin and end. Looking at the tails of the pictures above you have to have a pretty discerning eye to judge the two. Or is it just that close between the two?
Click to expand...

Overall Sumatran loaches have far less color to them, more of a washed out "silvery" sheen appearance. This is also why Sumatran loaches sell for far less (on a wholesale basis) than the more colorful specimens collected in Borneo.
Expand signature
He who dares not offend cannot be honest. - Thomas Paine

The photo below shows some 8-10" clown loaches that at the time of the photo had just been recently imported from Sumatra. Notice that even over a dark substrate these loaches are pretty washed out looking, compared to the previous photo posted of a Kalimantan loach. The only appealing part about Sumatran loaches, is there is no export restriction on their size, and large loaches always sell. In Kalimantan there is a ban in place on any clown loach over 6". Personally I would take a 5" Kalimantan over a 10" Sumatran any day of the week, but that's just me.

I believe I have a Sumatran Loach and it's the most beautiful thing in my tank.
I fell in love with these certain loaches when I got this guy.
I knew there was a difference so I went out looking for similar loaches as mine.
You just have to find the right ones. Here's some pics:

Those are clown loaches collected in Kalimantan ......... not Sumatra.
Expand signature
He who dares not offend cannot be honest. - Thomas Paine
J

RD. said:
Those are clown loaches collected in Kalimantan ......... not Sumatra.
Click to expand...

That one loach? The rear stripe doesn't reach the caudal peduncle though?

With such a wide variety of patterns, shapes, width, and overall sizes of black banding in clown loaches, using the caudal peduncle is only one tool that can be used to identify the collection point. It's certainly not 100% definitive. The only clown loaches in the world that have color like your loach, are the ones collected in Borneo, and some of the ones that I have seen commercially farmed in Florida. Not many farmed loaches in the hobby, but I have seen them, even up here in Canada. Farmed loaches are typically very tiny when found for sale, under 1", so if you bought yours at 2" or larger, then they are for certain from Kalimantan.
Expand signature
He who dares not offend cannot be honest. - Thomas Paine
Reactions: jcarson

This is an awesome read RD. Personally, to make it easier on myself. I've always differentiated the Borneo (Kalimantan) vs. Sumatran loach based off color tones. I have 40+ clowns and the variants are apparent.

As for the farming and Hybridization topic. I think we are see more and more of them within the past 6-9 mos. Bunch a little frankenstein looking patterns (saddled, squigglies, and dots) at all the box stores.

I tend to agree, from the Sumatran specimens that I have seen, it's quite obvious when you get a Kalimantan loach next to it. The deep red/orange fins, and the gold base color of a Borneo CL is far more striking than any CL that I have seen that originated from Sumatra.

Below is a pic of some 3/4" farmed raised CL's that came out of Florida a couple years ago, and landed in a local big box store. They were also priced at what this store typically sells 3-4" CL's for. I think that a lot of them died before they were sold.