I got an Email today from a friend,
after all his young sons fish had suddenly died, I gave him some C. bythobates fry as a replacement, and told him how I take care of them.
I had a spawning pair at the time and so many fry I could barely give them away.
They are a small rare Tilapine, found in only 1 small lake in Africa, Lake Bermin
In the Email he said the last one had finally died, at 14 years of age.

Reactions: Magnus_Bane, Deadeye, deeda and 3 others

That is a long lived small cichlid. Does the size of the lake have to do with their longevity?

The lake is quite interesting, in that occasional carbon dioxide pockets burst which can kill fish or even animals near the waters edge.
The lower parts of the like are anoxic, and some of the Coptodon have developed extra hemoglobin to help cope, as has also occurred in some other African volcanic lakes like Barumbi mbo.
Whether or not any of this accounts for the longevity I do not know, but most cichlids can be quite long lived if taken care of properly.

I was just wondering if the extreme environment made them tougher and the size of the lake meant they had to live longer to keep populations going.

I remember reading about the Lake Nyos CO2 pocket burst that lead to a lot of deaths in both animals and people.

I would guess so, when you consider the harsh environments that many Tilapine cichlids have colonized, and adapted to, they are quite amazing.
Consider the Alcolapia genus of Tilapines.
They have colonized lake Natron and its satellite desert soda lakes, that are (because they are shallow) very high in water temp, and more saline than the ocean. 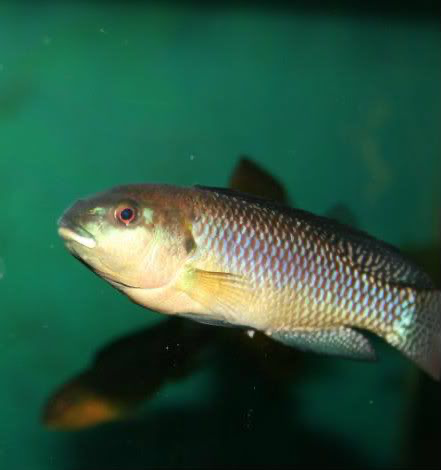 male above, female holding eggs below 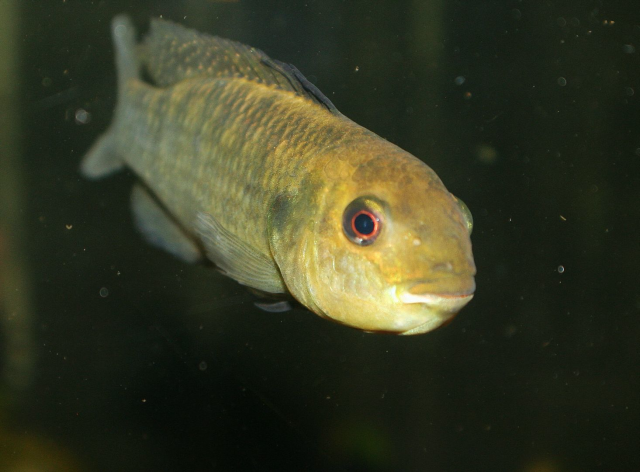 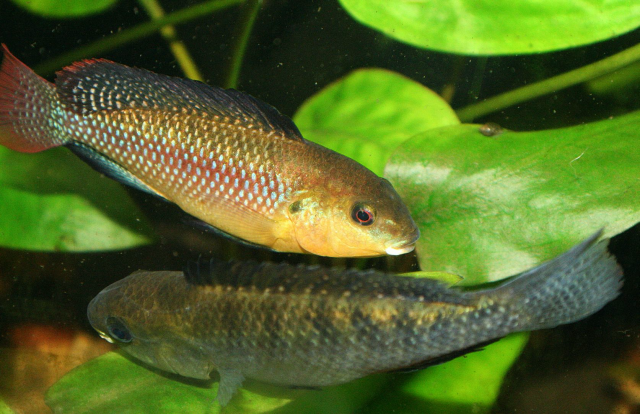 temp of the tank 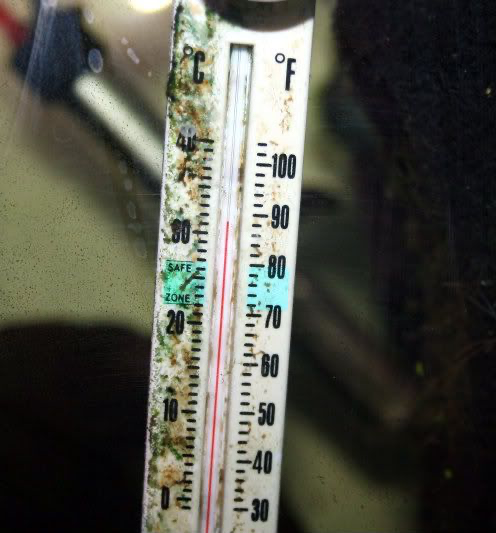 Because the conditions in the lake are so harsh, only algae grows, so they take full advantage 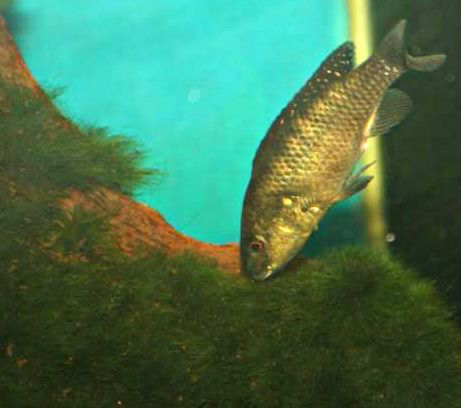 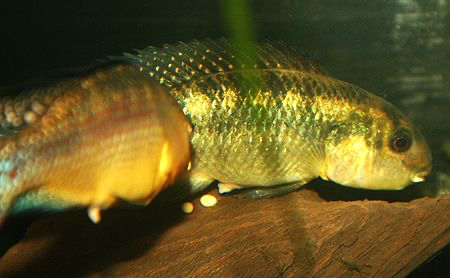 There are many other examples of Tilapine adapting, take the only cichlid native to Iran, Iranocichla hormuzensus,
or Pungu maclereni which feeds on fresh water sponges in Lake Barumbi mbo.
On another Barumbi mbo Tilapine Stomatepia pindu which has cephalic iridescent pits on the face used to detect prey under the mud, which it dives into to catch. 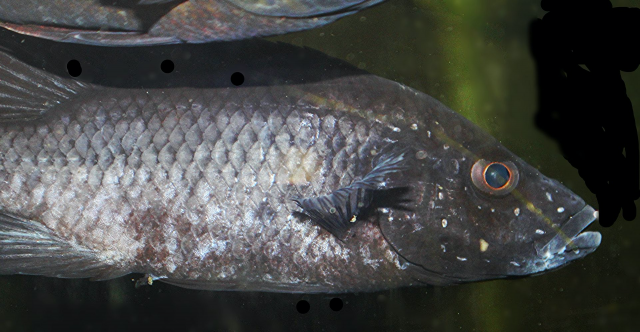 They are a remarkable group of fish. I never actually considered Lake Natron having fish.

That last chap is not a friendly looking fish.

Any more weird or extreme living examples? Those last 2 took me down a bit of an enjoyable rabbit hole.

Having grown up in Africa I have a soft spot for "bream" and other cichlids.
I especially like the serranochromis genus for fishing and brute strength and the sargochromis group.

The last pic, Stomatepia pindu is a predator, the Parachromis like mouth is a dead giveaway, but because it only reaches of about 7"
I have been able to keep it in 6 ft community cichlid tanks with other Barumbi mbo cichlids without aggression (except among other pindu.) 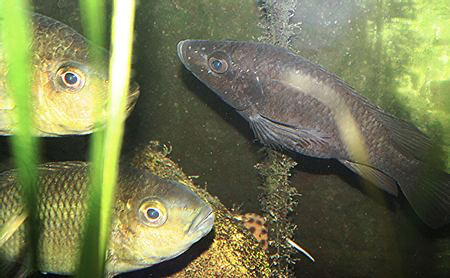 above, and below, housed with another same lake denizen Saratherodon linellii. 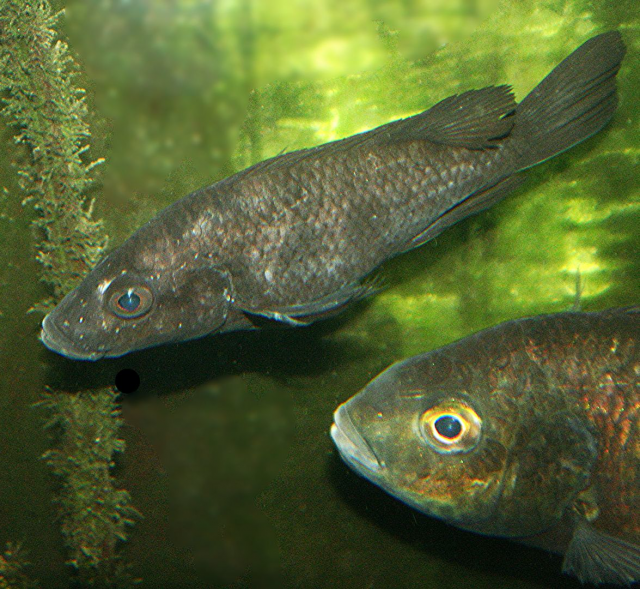 and below fin the same tank, Stomatepia mariae, and Konia eisentraudti, both also, from Lake Barumbi mbo. 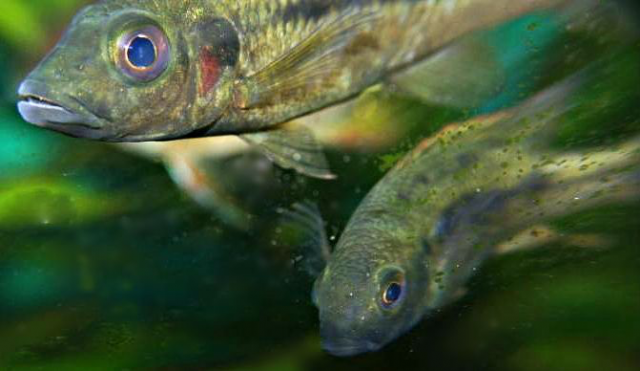 As you cab see by the mouth shape, and teeth S mariae, is also a predator 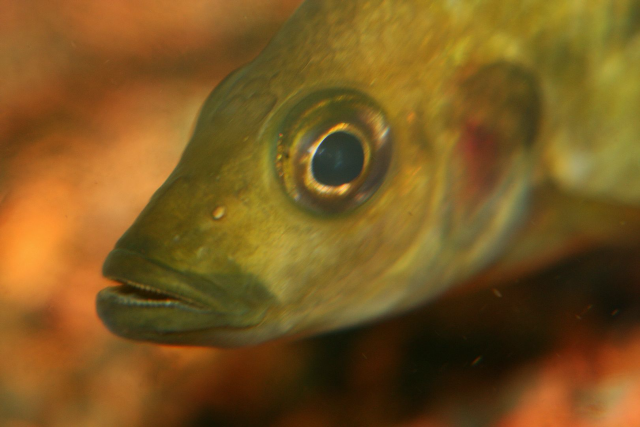 Most of these Tilapines that have adapted to harsh, small, isolated lakes like Natron or Bermin have remained smaller than their larger ancestors that somehow were able to colonize these bodies of water.
It is thought Coptodon zilliii, is the basal ancestoral species that many of the lake Bermin Coptodon species radiated from.
They look very similar, zillii below., about twice the size. 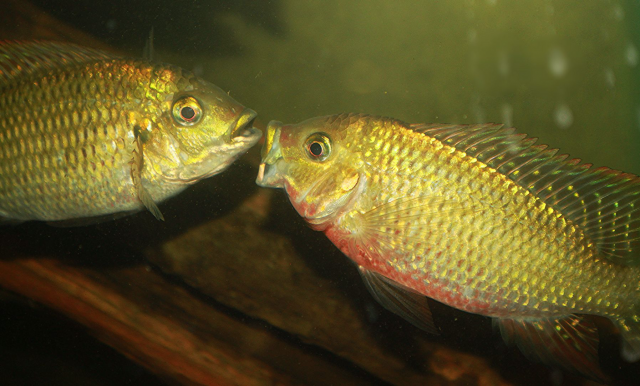 I had been interested in Serranochromis, and Sargochromis, but was never able to find the available in the US.

I read up about the pindu and it looks like a fun cichlid. Have only been able to find wholesalers in Africa and no sellers locally.

I am surprised yellow belly bream, serannochromis robustus; nembwe, Serranochromis jallae; thin face cichlid, Serranochromis angusticeps and the like never caught on more with monster fishkeepers in general.
They are brutes and color up magnificently.