I've built and modified several different aquarium lamps over the years, but this 6 footer is my most ambitious. It's the biggest, brightest and the first with a dimmer.

As you look at the photos, you will see that I did not take many pains making it pretty. This really is a quickie experiment to prove the regulators will function properly, and that I can build a $250 lamp for under $100.

Everything else I already had, including pipe, wire, solder, glue, sealant, screws, scrap 0.10" Lexan, & half of a small plastic box. If you had to buy all that other stuff at retail just go buy a lamp.

I used the now iconic white plastic rain gutter as a base, with a 1" PVC pipe to hold the pucks and act as a wiring conduit. It is not low voltage and not 100% waterproof, so not as safe as some other lamps. It is so large, however, that dropping it into the 125g aquarium is fairly impossible.

This shows the bulb and what's inside of it, after you remove the plastic covers and metal heat shield inside the plastic. 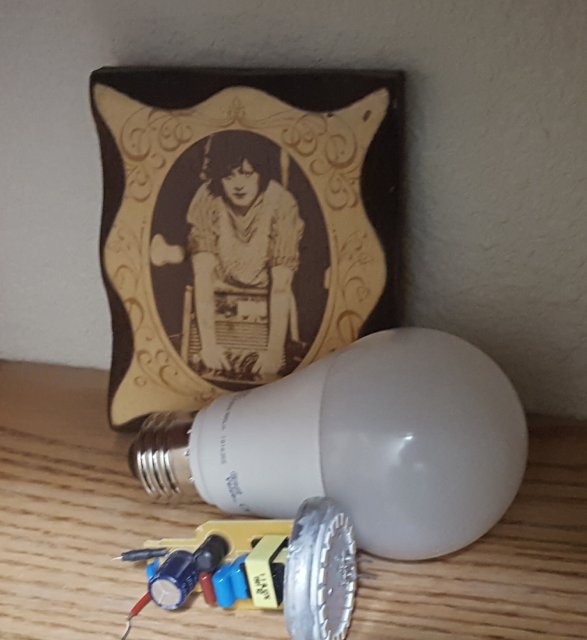 I basically just cut the base of the bulbs apart with a pair of dikes. You can see the remainder of one. The little plastic globe snaps right off. 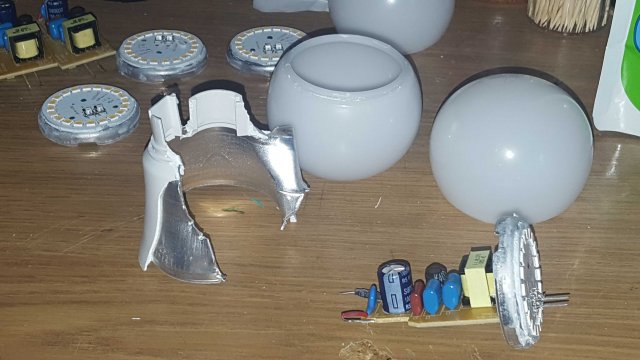 So I have five dimmable solid state voltage regulators. These also incorporate a cheapo surge protector. 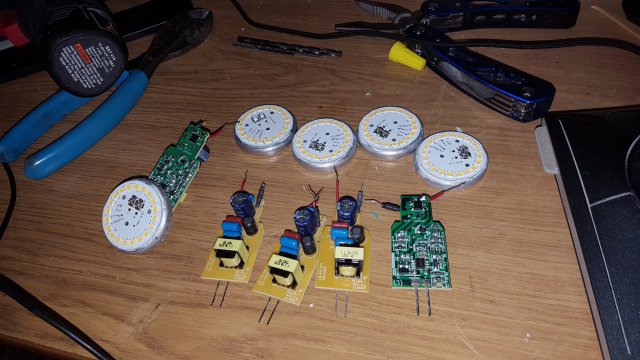 I'm going to gang them together on four separate buses for the input and output power. I glued the circuit boards to a small plastic box with a bit of oatey medium clear PVC cement. I can no longer buy methylene chloride in California so I also use this to build the lexan box. 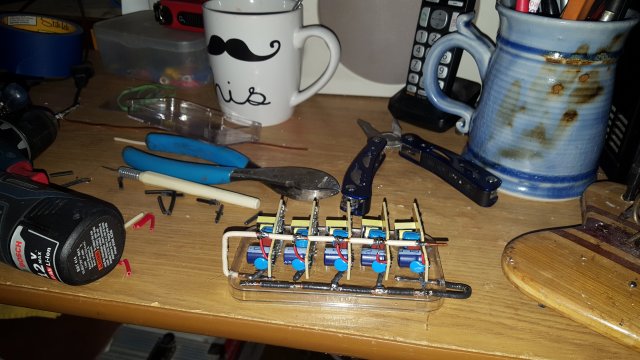 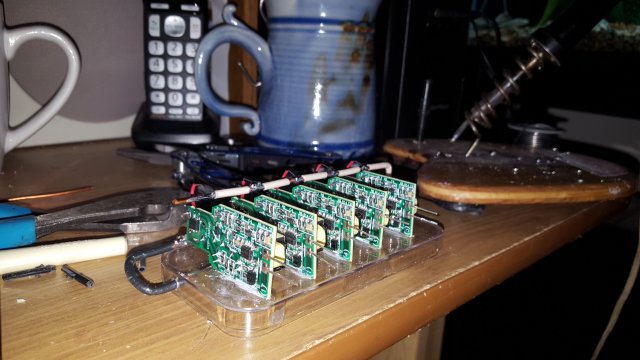 Here I have the buses all finished and I have blue together a small box out of scrap lexan to hold it all, including the dimmer switch. This dimmer switch is designed for LED lights and it does not cause a flicker. 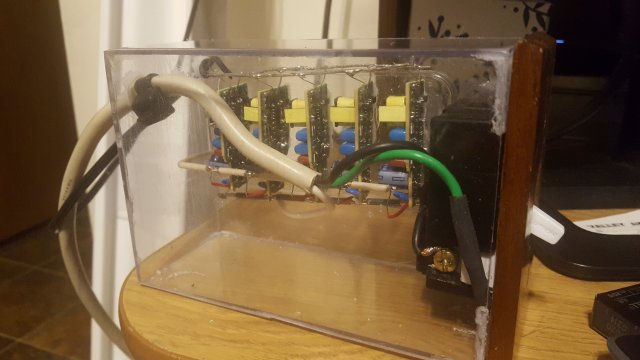 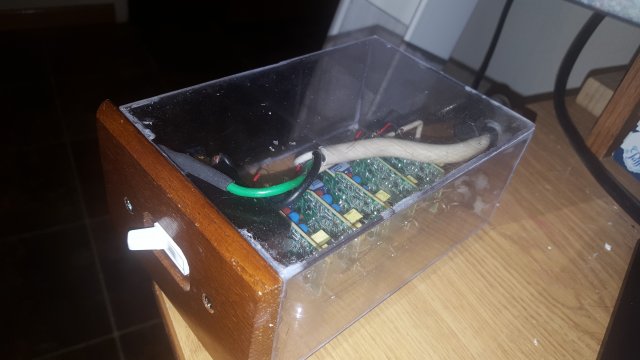 The black line cord going to the lamp has a nice strain relief molded on and it came from a broken aquarium air pump. I used zip ties for strain relief on the other ends.

The lamps are held in place to a 1in PVC pipe mounted in the gutter. All the wire is contained in that pipe, and there are two wires from each lamp.

So each connection has 6 wires which are all soldered together and insulated with epoxy putty. It's all stuffed inside that pipe so you can't see it.

This is the first test of the LED lamp and dimmer. 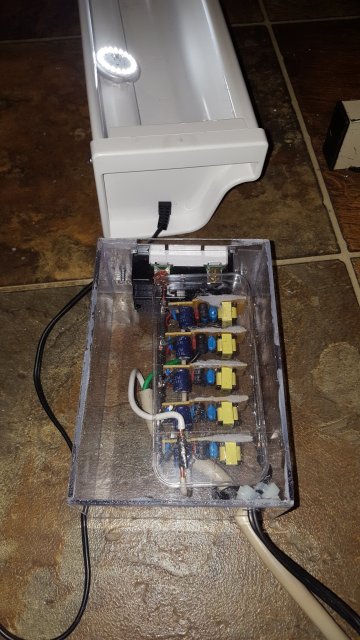 There are two exposed contacts on a puck and they carry almost 100 volts. All my aquarium LEDs are typically 9 or 12 volts.

I insulated those with silicone sealant to prevent getting shocked if someone should touch them. 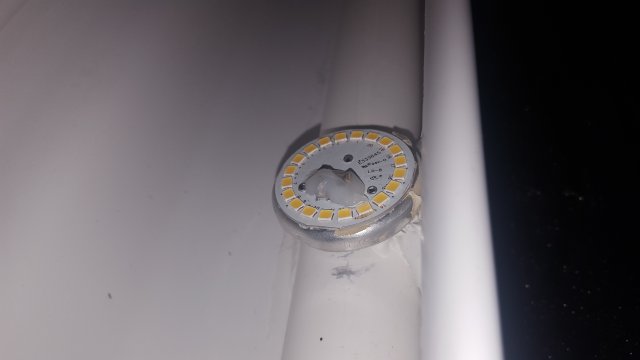 First test on the aquarium shows the light at full brightness and then at dim. I was able to adjust the dimmer to go even lower with its internal adjustment, but I did not photo that. 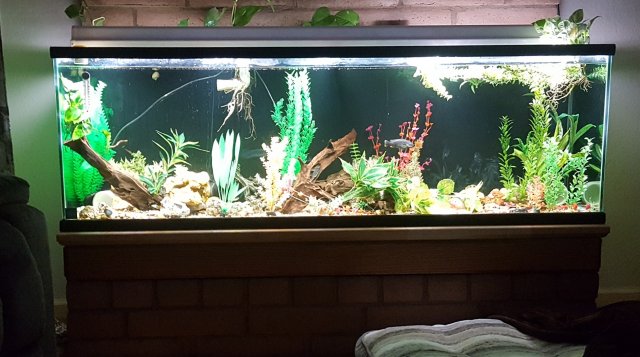 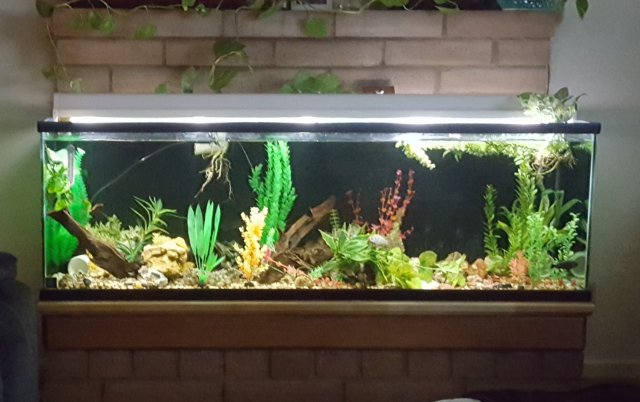 There are a total of 36 soldered connections and of course I blew one of them.

It was the connection at one of the lamps and fortunately it happened before I put on the silicone insulation.

I had used too much heat on that one connection and destroyed the tiny circuit board terminal connection to its board.

These are not soldered on the actual light bulb and you can just pull the puck right off of the leads.

We were watching TV last night and my wife said, "Hey your lamp just flickered!" and I smelled the smell of overheating Electronics.

With one puck disabled my voltage Regulators were supplying too much and it was overheating the other 4 pucks.

It was an easy repair and now the lamp seems to be functioning very well with no overheating or burning insulation or hot wires.

Of course is not ul-listed so if the house burns down it was my fault.
Expand signature
I hear bubbles 24/7
Reactions: TheWolfman

Awesome! I think one of the greatest advancements for us is the availability and reduction in price of LED lighting.
Every time I look at them on Amazon or eBay it seems they have something new available.
I never thought about taking a regular LED light bulb apart!
Great idea! Thanks for the pics too.
I but LED light bulbs from Dollar Tree
Expand signature
I work so I can afford to buy fish, feed fish, house fish and make my fish happy...
Reactions: Ulu 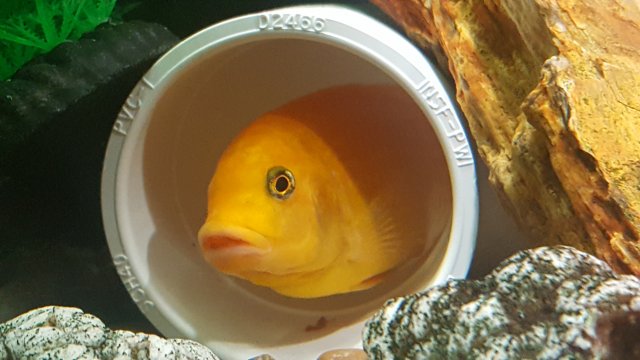 "Ungowa Tarzan! I'm getting a sunburn from all this daylight!"
Expand signature
I hear bubbles 24/7

johnnymax said:
. . . one of the greatest advancements for us is the availability and reduction in price of LED lighting. . .
Click to expand...

That and inexpensive PVC plumbing!

I built a smaller one with these GU-10 base LED track light bulbs, and they are so small I didn't have to disassemble them. 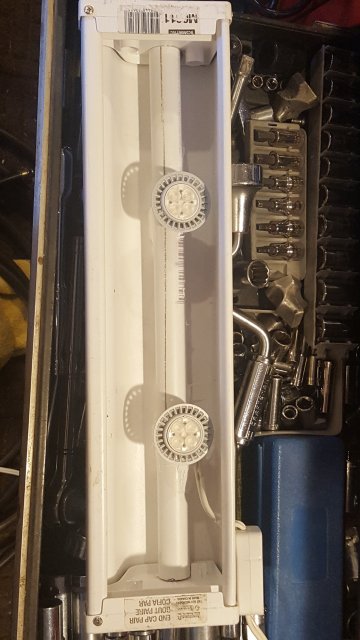 I would say that the GU10 base light bulb is a much better deal because you don't have to take anything apart you just gang the bulbs together.

As far as I know they come in these two sizes but what I'm showing you are halogens, left over when I replaced all of mine with LEDs. 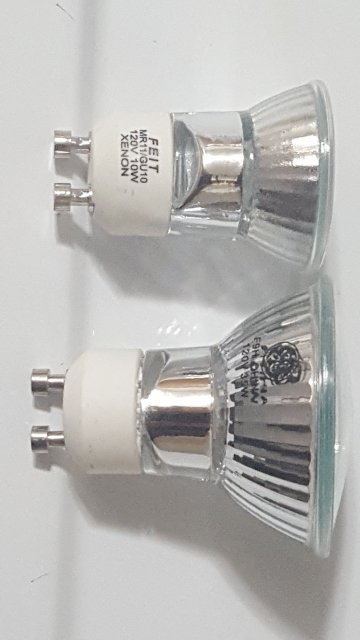 For anyone building this light I would advise you to use GU10 base LED lights and forget the standard screw in type light bulb.

It's about ten times as much work to build.

Also I noticed some flickering in the new lamp so I think I have turned the internal dimmer adjustment down too low.
Expand signature
I hear bubbles 24/7

Are you saying that the light housing is a piece of gutter with end caps?
I need to look at them next time I an in Lowes.
Expand signature
I work so I can afford to buy fish, feed fish, house fish and make my fish happy...
You must log in or register to reply here.
Share:
Facebook Twitter Reddit Pinterest Tumblr WhatsApp Email Link
Top Bottom