I've had some time to tinker recently, so I threw together a protein skimmer out of some scraps I had laying around. Despite my tank being freshwater, it does still work to some degree. To make it, I attached a 16" section of 1" pvc to the outlet of a powerhead, stuck a few airstones by the inlet so the powerhead would suck in the bubbles and chop them up, and I used a bottle for the collection cup.

It took about a two to three weeks to break in, but after that I was getting a wet skimmate, which I think is quite good for freshwater, as I didn't expect to get any skimmate at all. This has been an idea of mine for a while, as I've always wondered how effective a protein skimmer would be in freshwater, if at all, but I didn't really want to spend $400 getting one to test it out. In the future I plan to make a foam fractionator, which supposedly works quite well for freshwater.

I'm also running 50mg/hr of ozone through the skimmer, which could be improving the results, or possibly even be the reason why it works at all. I haven't tested it without the ozone yet, so I'm not sure how much it's altering the results if at all. 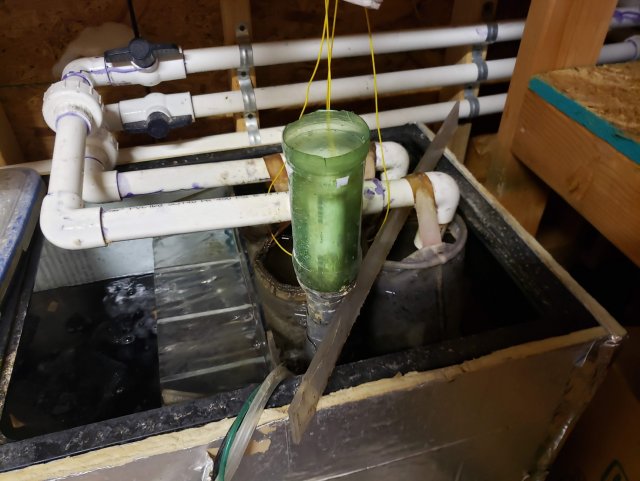 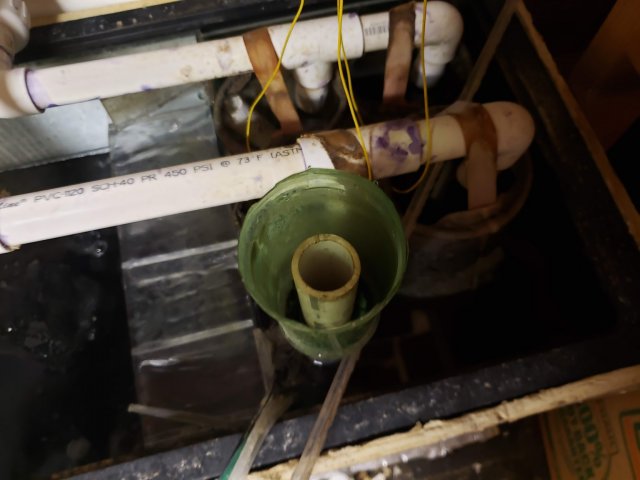 The skimmate foams quite well, which I believe is another indication that the skimmer is working. 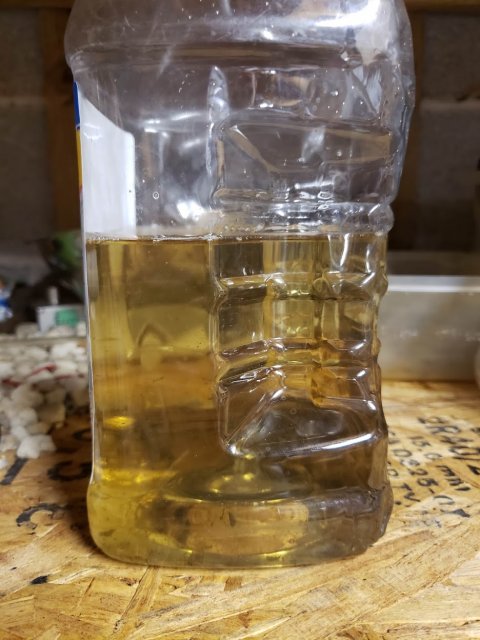 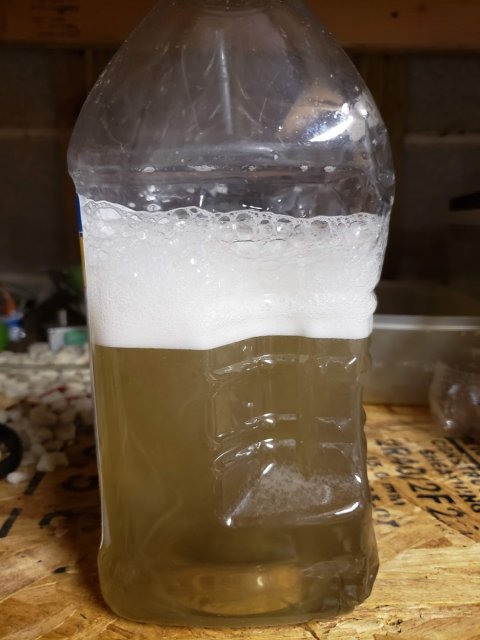 I've heard ozone makes a big difference on FW skimmers. If you try it without it please update us. At some point I need to make one. I run nitrate reactors on my tanks and sometimes they can produce a nasty slime byproduct I'm thinking a skimmer will remove.
Reactions: SBM, Angelphish and twentyleagues

I have used fractionation on fresh water tanks and ponds for over 20 years, and consider it one of the best filtration methods, because it removes organic compounds before regular filtration has a chance to break them down to nitrate, and also removes free floating algae, and even some parasites.
My first fractionators were counter current types using venturi tubes, and later (especially for ponds), the cascade type.
I did tests in the lab weighing out desiccated skim waste compared to straight tank water solids, and dry weight, the skim waste was about 8 -10 times heavier than that of tank water. 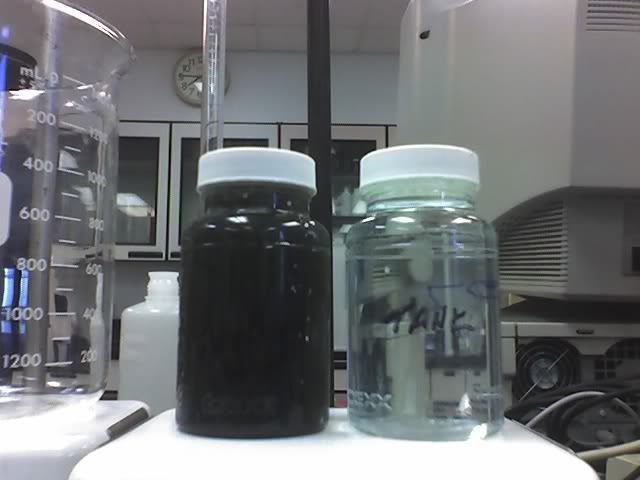 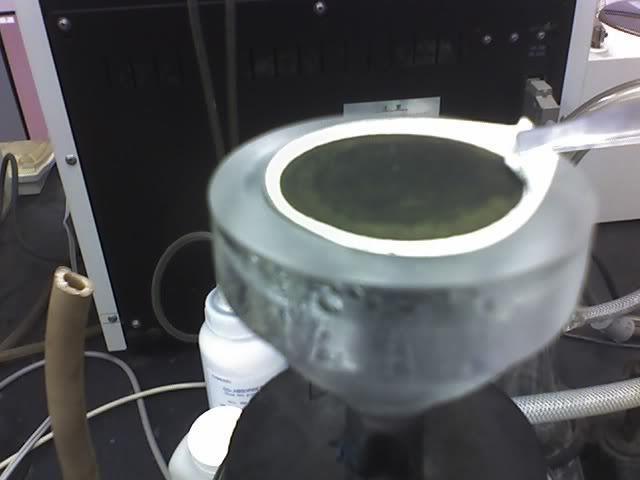 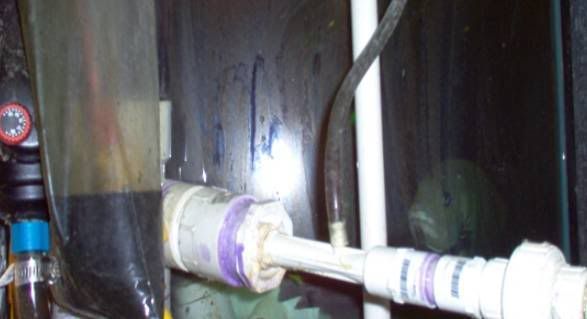 Above a counter current DIY with a bag of skim waste.
Below a video of a DIY cascade model skimming a koi pond
koi pond fractionation
I found that any of the commercial models I tried came up short compared to DIY models.
Reactions: tlindsey, SBM and Angelphish

It takes about 2-4 weeks to fill up the 64 ounce container I use for skimmate, so this is what I got after I topped it off this week: 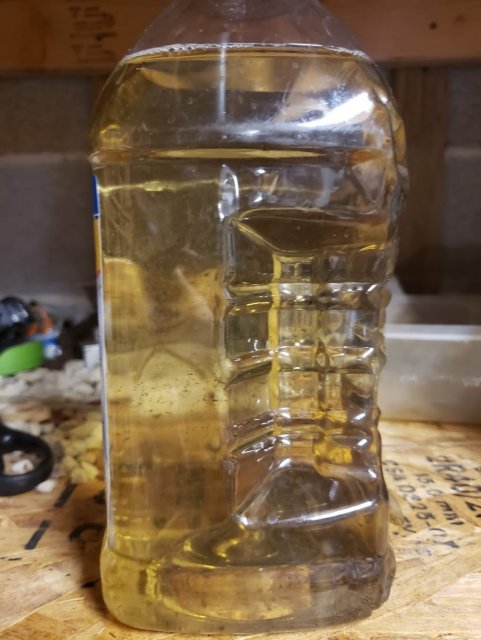 I turned off the ozone after emptying the skimmate container, so we'll see if that changes the results.

duanes How effective are your foam fractionators are keeping down nitrates? Are they good enough to prolong the amount of time needed between water changes?
https://www.monsterfishkeepers.com/forums/threads/the-tale-of-the-tailless-bala.693200/
Reactions: tlindsey

I first started using them after reading an article called Foam Fractionation in a Discus Hatchery, by Joe Gargas (? long tie ago (80s)) where his experiments showed he could reduce frequency of water changes). He had been doing 90% water changes per day, and I believe still feeding beef heart (that's when mammalian meat was still accepted). I believe he also used ozone, again too long ago to be sure????

I believe because I was only doing one water change per week, and stocked heavier in those days, and feeding trout pellets to Parachromis, it helped,....... but because tanks are so individual (size, stocking, etc) it depends.
Fractionation at times seems to have break point, if the water is "too clean" it subsides.
I found right after a feeding of heavy protein foods, or a death in the tank, it would really crank up and foam,
or in ponds fractionation would really spit out the waste during algal blooms.
During these type events I could get a liter per day, or more (especially on the cascade model. 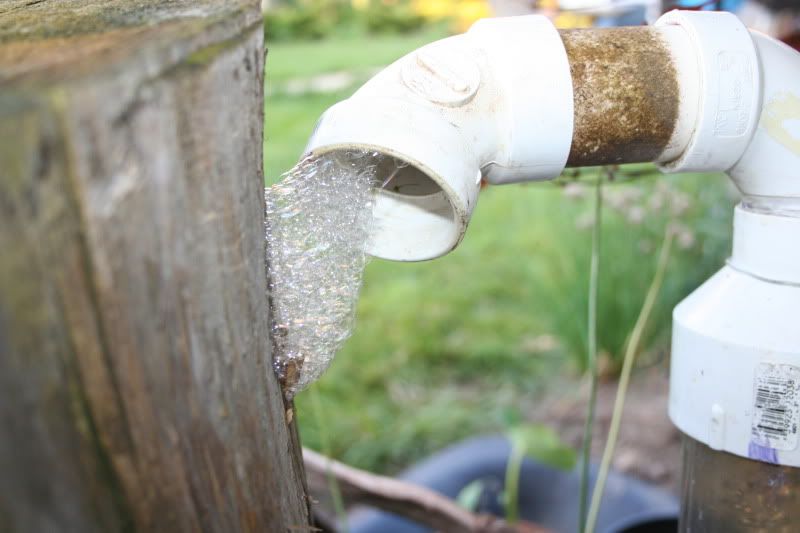 above plans for the counter current type from Aquarium Fish Mag, by Stefan Meyer..
Below tossing together the cascade model with 4-6" diameter PVC 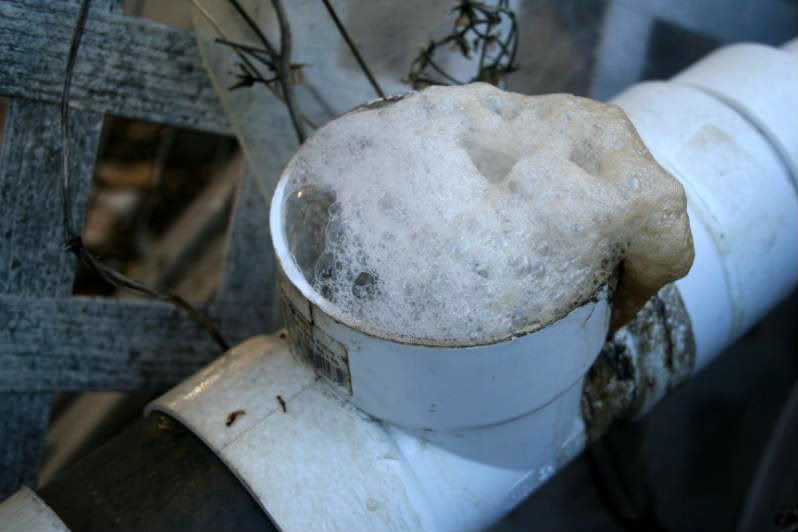 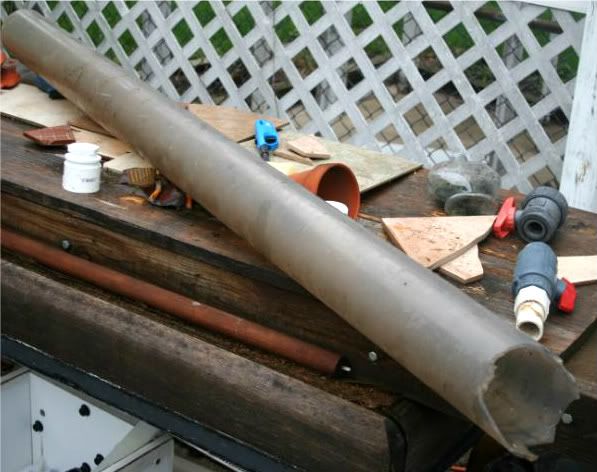 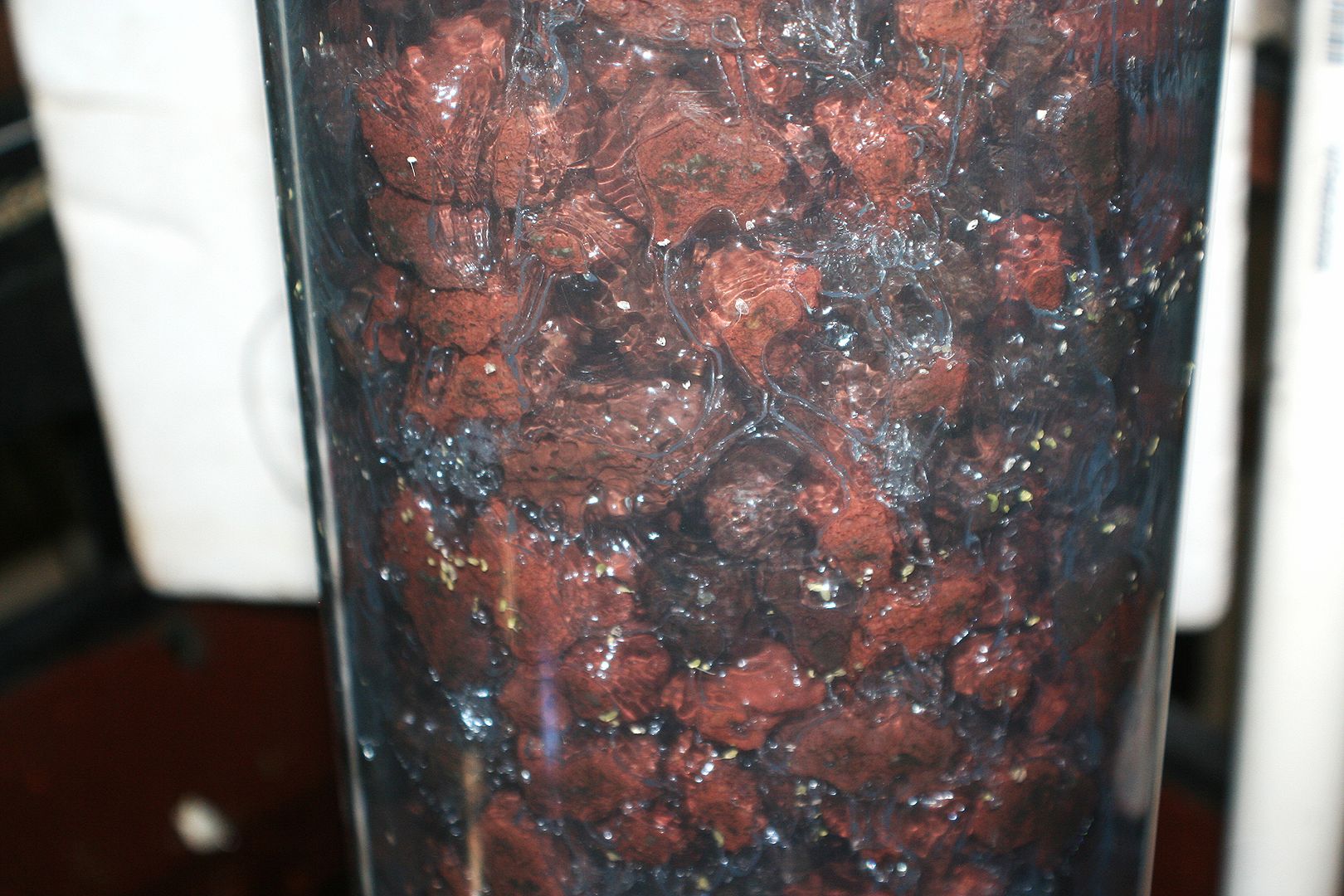 The media used (lava rock) of the cascade type would also become covered in beneficial bacteria bio-film so became extra biofiltration for me.
One of the reasons I hesitated to use ozone.
Last edited: Mar 26, 2020
Reactions: Angelphish and tlindsey

This is what I got since last week when I turned the ozone off. Definitely less skimmate, but it seems a little darker. When I turned off the ozone, I didn't feed it's airline directly to the skimmer, but simply kept it in the ozone generator assuming it would still pass through, so that could potentially be why I got less but better skimmate. That leads me to believe that I can get better results with the ozone on if I do a little more tuning with the airflow and skimmer height. 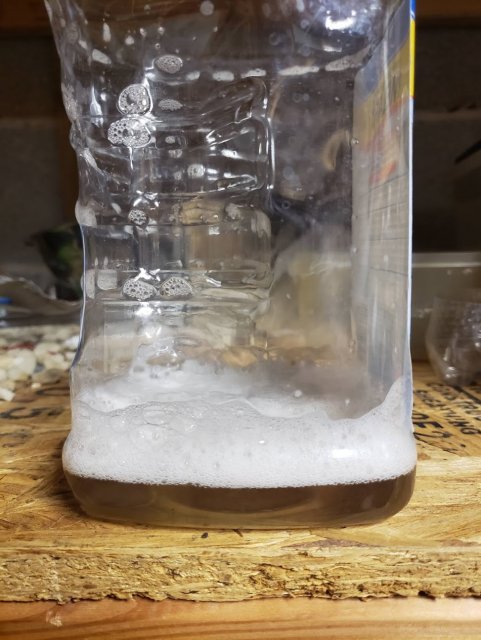 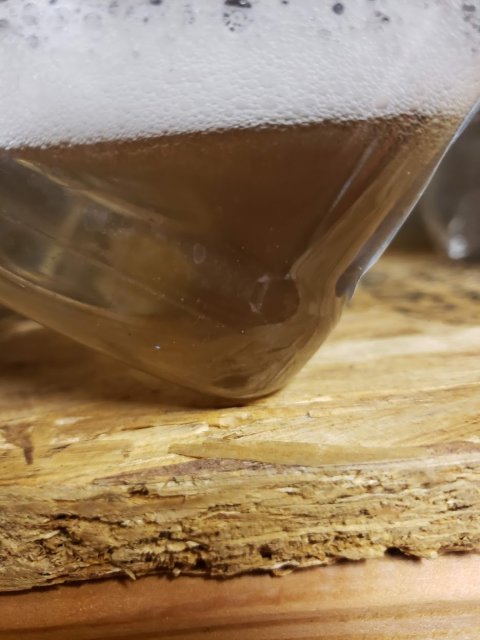