RD. said:
My mistake, sometimes I forget that these discussions don't always involve grown ups. Dave gets upset because I went ballistic, and accuses me of starting another nutrition saga, after simply posting a comment about a food (that the OP wasn't even asking anything about), and you are just being a funny guy. Sure, ok pal. My idea of humor must be a lot different than yours. I just found it to be strangely juvenile.

And I wasn't following you, I was tagged to join this discussion. You didn't create this thread. lol
Click to expand...

Not your fault how can you have a sense of humor when your skin is soo thin its almost translucent. Yeah it was a joke.... see the little emoji guy laughing. Maybe the joke wasnt meant for your enjoyment, maybe your just wound too tight ooooor maybe your cruising around looking for an arguement as usual. Either way move past it already.
Beware that, when fighting monsters, you yourself do not become a monster... for when you gaze long into the abyss. The abyss gazes also into you ■-Friedrich Nietzsche

Used bug bites in the past. If i remember correctly he didnt report any issues.

I was going to pick up a little tub of it last week
Click to expand...

Yep, tried it. As

RD. said as a treat, not a staple. Dont currently even use it now. I think it could be a good item for newly introduced fish being a bit finicky, it might get them eating... but if I remember correctly high in fat and really not providing the things my fish needed.
Reactions: LBDave and Poseidon2.0

From my perspective there's a big difference between being 'passionate' about one's views and going 'ballistic' or being 'aggressive'. In another thread the other day I was accused of being aggressive and 'trying to run people off of MFK' lol, just for standing up for my right to express an alternative fish keeping view (the first time quite nicely; after that it went downhill lol).

But sometimes I'm wondering, what do we need to do, set up 'Safe Places' on MFK like they're doing on American high school and uni campuses nowadays? MKF is made up of people with different personalities and different views, some of whom may present their opinions in somewhat different style, this is natural just like in real life -- if we were all the same and constantly overly-pc, Mr/Miss Nice, my opinion is MFK would be a much more boring place where exchange of info was stifled. If things occasionally explode in online mayhem (Thunderdome, cough cough) or get blown somewhat out of proportion, so be it, an open and free system of interaction will survive just fine (as MFK has done over the years), as long as general site TOS are respected.

And about joking around, I surely do that 'occasionally' ahem, sometimes to even juvenile levels I'll admit, but I'll also admit that it's easy for (esp. written) jokes to be not so appreciated by others or taken the wrong way -- like the time I was recently joking around about the thread closure record -- so we shouldn't be surprised when people don't take it lightly or the way we may intend. For my own part I will try to watch my joking around, though make no 100% guarantees lol.

I also know my posts are quite often on the longer side: no apologies on my part though, if you're lazy, have a short attention span or are just disinclined, that's fine, just move along, plenty more to see on the site.

Speaking of moving along, I tried expanding my Aros' diet yesterday by giving them some high quality frozen squid cut into quite small pieces -- they both spit it out lol, too rubbery and chewy I guess. Going to get some sea bass and scallops later today.

I'm also thinking to try these frozen crickets -- but the dealer I bought 1 of my Aro from surprisingly advised against it: his opinion was if i start feeding crickets there's a very high chance my Aros will stop eating pellets and shrimp because it'll only want to eat the crickets. I'm not sure if this would actually happen but I'm kinda reluctant to test it out... 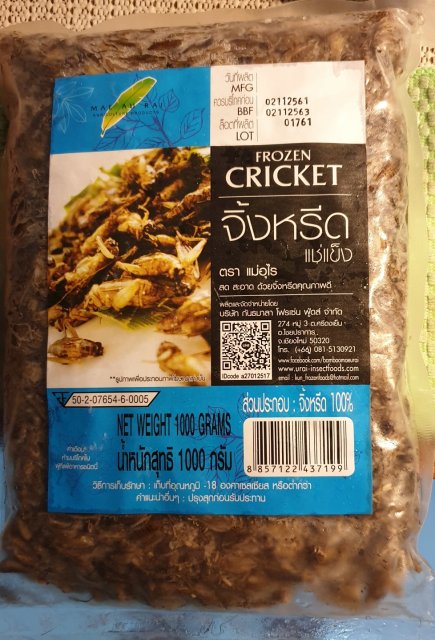 Well said all around, Barrett. Refering to me as thin skinned made me LMAO. Now that was funny!

As far as crickets, your aro dealer is correct. Crickets can be like crack to a fish, to where some fish will absolutely refuse all other food. And honestly, unless gut loaded prior to feeding, I wouldn't feed them anyway.
I have posted the following several times over the years (yes, an ex NLS distributor posting nutritional information for the masses regarding insects - imagine that!)

HTH
He who dares not offend cannot be honest. - Thomas Paine
Reactions: islandguy11 and jaws7777
J

Beware that, when fighting monsters, you yourself do not become a monster... for when you gaze long into the abyss. The abyss gazes also into you ■-Friedrich Nietzsche

Thats pretty cool.. loved the dramatic music, would go well in one of my "relaxing" bichir vids lol
Beware that, when fighting monsters, you yourself do not become a monster... for when you gaze long into the abyss. The abyss gazes also into you ■-Friedrich Nietzsche