is this a gold saum or green terror? 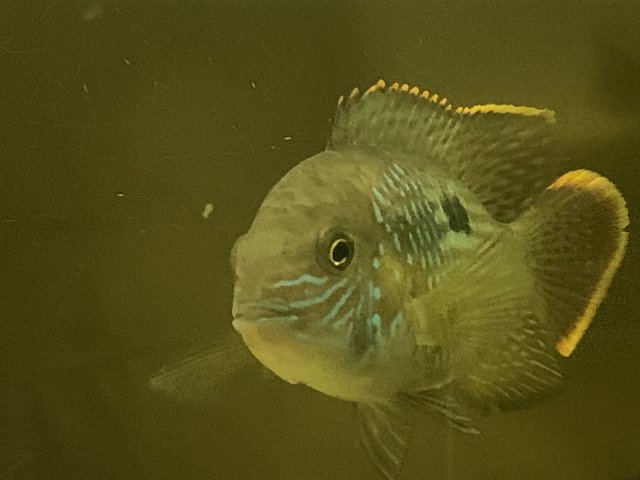 sold to me as a green terror but i assumed it was a gold saum due to the yellow seam. ik theres like 8 different species that fall under the name green terror what do you guys think?
Expand signature
peanuts salty, but deez nuts still the saltiest.
Reactions: Magnus_Bane and Deadeye
N

Gold suams are green terrors. Both the gold and white are variations of andinoacara rivulatus.
Expand signature
A wise man once said “There’s always a bigger fish.” That man’s name was Liam Neeson, unfortunately I don’t have enough respect for the movie to name it.
Reactions: Magnus_Bane, neutrino, Rusty91 and 1 other person

By far, most call Andinoacara rivulatus green terrors, whether having orange or white edged fins (edge or 'seam' is all "saum" really means; saum might sound official but it's not and it's used in a way that confuses some over which species is which). In the US the fish originally called green terror in the early 70s was the the orange finned rivulatus. There's a subset of hobbyists who insist there's a "true" and "false" green terror, but that's a hobbyist contrivance and nothing to do with official classifications.

As close to official as there is might be taxonomic registries like fishbase that list green terror as a common name for rivulatus and not stalsbergi. The US Fish and Wildlife Service also refers to rivulatus as the green terror-- see link, but the reality in the hobby is one or both species have been called green terrors. The "true" and "false" thing is a lot of fuss over nothing, the real question back in the day was which fish is rivulatus. Some, including Alf Stalsberg, once thought stalsbergi was rivulatus, but this was proven wrong and stalsbergi became stalsbergi. I almost think stalsbergi as the "true green terror" was a fall back position when this happened-- just my opinion.

Since both rivulatus and stalsbergi can have white edged fins, Id depends on the scale pattern. If you're interested in the history, at least in the US (also Germany, where a 1984 article called what is now stalsbergi the 'green terror that isn't"), see the article below. To sum up, first we had white edged rivulatus, soon after was orange edged rivulatus, which owners quickly called green terrors, meanwhile there were photos of a "third fish" in a couple of books. Some, including Alf Stalsberg, thought this third fish was rivulatus, but they were mistaken and this is the fish that became stalsbergi. (which fish was called green terror in Denmark may have been different)