Well, the reason I wrote "suspicously" is that there isn't a surefire way to tell just from the video you posted - as you know, the most exact ways to identfiy fish we tend to employ usually require high-resolution and well focused pictures. (E.g lateral line scale counts - pure goldfish have 28-30, carp have 35-40). What's more is that in situations like the one you described, interbreeding is often so rampant that there is not only F1 Hybrids (in this case Carassius Auratus x Cyprinus Carpio) but also a plethora of F2 and F3 which end up being something like (Carassius Auratus x Cyprinus Carpio) x Carassius Auratus. I used to go fishing in a private lake stocked with carp and goldfish and you'd find hybrids of all sorts but also pure goldfish up to a whopping 16".
What made me suspect hybrid, though, was that;
1. The body is very deep behind the pelvic fins. Pure goldfish are often quite deep bodied up to the pelvic fins (either for ornamental reasons or just because they are well fed) but the body tapers down more towards the tail.
2. The mouth, while you report it does not contain visual barbels, does not look like a pure goldfish's (they have thinner lips and the mouth is more terminally positioned on the head).
3. The biggest clue for me is the positioning of the eye. In pure goldfish it is quite a lot nearer to the end of the head and the mouth than in koi and hybrids.

Again, without high res pics and a lateral line scale count this is all just stabbing at the dark and I might well be on the wrong track here. Just my two cents based on the video.
Reactions: fishhead0103666, MatteoTheEnder22 and thebiggerthebetter

C Chub_by I much appreciate the tips and the knowledge. Thank you so much bro. I got a few photos too. See below. You got me intrigued and challenged for sure!

I see your points about the bodily features geometry.

Let's count them scales if the photos are good enough: I got around 32-35! 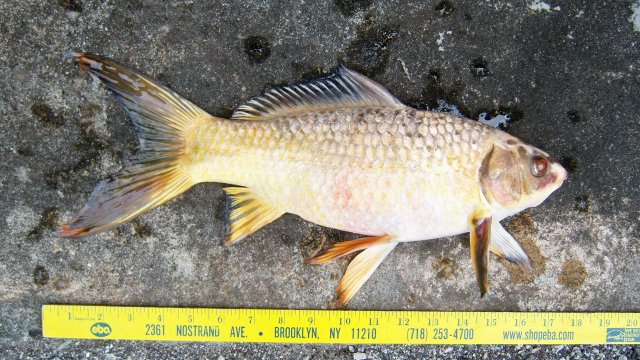 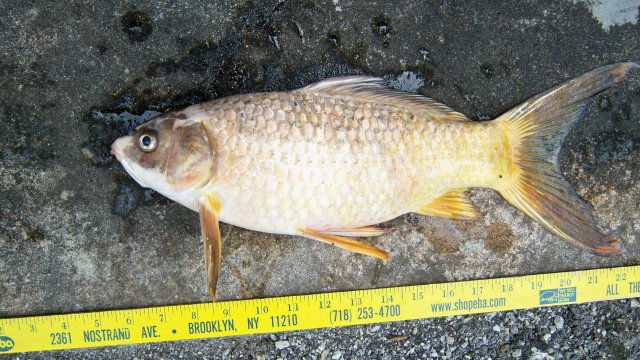 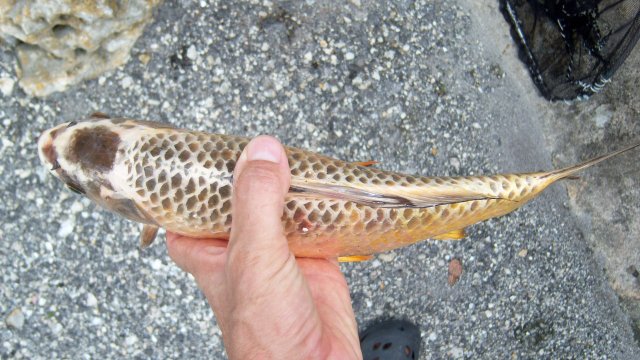 Thanks for the new pics, Viktor. I'm pretty much sold on it being a hybrid at this point - I count 32 scales on the lateral line. The picture from above is also very interesting; first of all the head is wider (in comparison to the thickest part of the body) than it would be on a pure goldfish. Also, the fish displays something that the Japanese call Fu ku rin - that is a reticulated or net-like pattern of lighter-coloured skin around the individual scales. I have attached a very crude drawing to outline what I mean. It's quite sought after in koi and I've never seen it in a goldfish, much less a bog-standard one you would find in the type of pond you described. In my (layman's) opinion this is definitely a hybrid.

p.s This has been fun! I used to look enviously over to the other Characin section with their fancy scale counts and whatnot. I love that we've brought that over here

Thank you so much C Chub_by ! You've taught me a few great lessons here. I didn't even know Carassius hybridize naturally with Cyprinus, I mean I supposed but wasn't sure. And I agree with the hybrid label. Everything you pointed out makes sense, including its large size for a 10 year old fish.

Four out of 6 (last) ide aka golden orfe have established in the 25K and have been doing well. They are around 18"-20" now. Hard to take good pics of them in the large dark pond with glare off the front glass facing outdoors, so some poor ones. 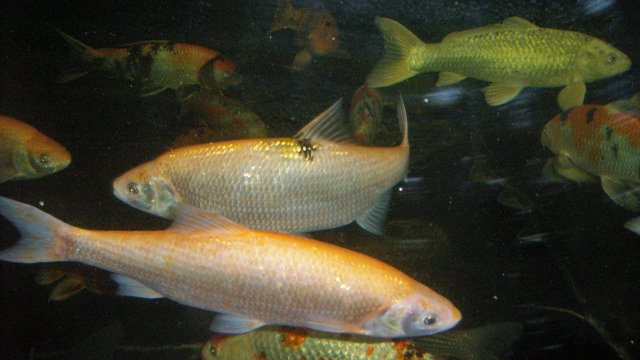 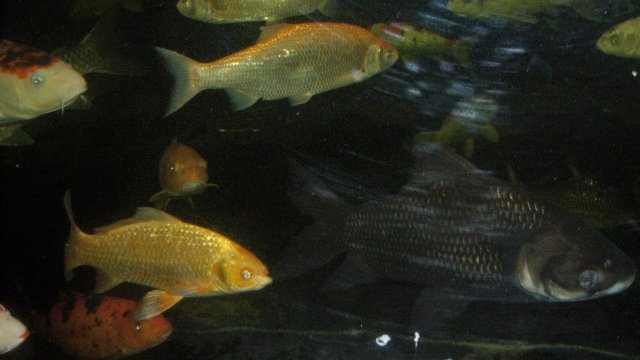 The latest batch from Scott and Monica of Cape Coral, Florida. The platinum ogon (the smallest at 1ft) hated the 240 gal tank where it had been placed initially, so in a week or so we took a gamble and transferred it into the 25K with all the rest. It's been a couple of weeks and so far so good - no tank mate, including our large mahseer, beluga sturgeon, and 4-4.5ft wels catfish, have touched the platinum. It's been happy and feeding well.

Viktor,
How would someone donate to your fish rescue if they wanted to help you out?

I suggest you implement a signature (with link) on all your helpful posts.
Expand signature
Reactions: thebiggerthebetter and tlindsey

Recent rescue of 10 koi and 20 goldfish from Sarasota, FL. Have anyone ever seen a mirror or partly-scaled goldfish, in an analogy to a mirror carp / doitsu koi? I don't know if such mutation exists in goldfish.