I was assuming that your bio load was going to be high before you even mentioned your stock. I went with the view, big tank, big fish, big bio load. That's why I also thought your filter might be a bit small if used on its own, but in conjunction with something else, maybe you'll be good, only time will tell.

You might want to revisit your 30% weekly or bi weekly water change schedule too. Seems a bit on the light side, but again, only time will tell once you get up and running and test your nitrate levels.

I'm not sure i'd like the tank on the floor, I always think any tank is better in an elevated position for better viewing, but that's just me. That's why i'd go with a good diy stand and have a sump underneath, but again that's just me.

You can maximise your six chambers to the full as you won't have a pump in any of the sections taking up valuable space. I'd probably do varying degrees of sponges and filter floss in sections 1 and 2, and then use the other four chambers for bio. But there's loads of variations you can do.
Reactions: dr exum, twentyleagues and tlindsey

If it were me, I'd put coarse mechanical media in the 1st chamber where water enters, 2nd chamber finer mechanical media, and fill the rest of the chambers with bio-media (lava rock, bio-balls, whatever) although the final chamber could also contain mechanical media to catch slough off from bio-media. All type media serves the same purpose, and beneficial bacteria will grow on all, and their population will ebb and flow according to your bio-load.
Also if it were me, on that size tank, because all those fish are high consumers of protein,
instead of worrying about extras like under gravel, I'd rig up a protein skimmer.
Below is a video of a DIY one I put on a similar size/gallon pond (I've also used them on indoor lines of similar gallonage tanks .
koi pond fractionation
With those kind of Amazonian species, a heavy flow will be best.
Since the Amazon river flows an average of 209,000 cubic meters per second, spread across its width, worrying about too much flow from just about any pump, would be a non-issue.
I also agree with Tom, your projected water change schedule, seems a bit wimpy, with your stocking species and eventual sizes.
Reactions: twentyleagues and tlindsey

+1 to matten filters and/or sponges with a powerful air pump. I prefer air powered when dealing with a tank that sits on the floor. Look into poret tower filter blocks as well.

Otherwise that overhead setup sounds pretty good too. I would definitely have that going too if youre stocked heavy.
Reactions: twentyleagues and tlindsey
S

I have no choice to raise the tank on a stand due to the location it is placed at, on the floor it is going to be...

Looks like I will take a gamble in going with just the existing overhead setup first, with increased water changes at 50% weekly.

How about pump size? Any recommendations of brand and model? 6000 litre/ hour?

The average pump age suggested for most tanks is 5 times tank turnover per hour, the size you suggest is a little over 2 times per hour (if I've converted right?).
For the species you want, I'd venture to say at least double LPH pump age, better, triple.
Reactions: celebrist, twentyleagues and tlindsey

duanes said:
That system does not seem wimpy to me, with mechanical filtration where water enters, and filled with the biomedia it could easily handle the tank.
Its not how big a filter is, it's about the flow and media that make a difference, its all about how often you clean the media.
I have used lava rock filled columns only 8" in diameter and 4 ft tall, a couple scrubbies for mechanical, and had them handle a chain of five or more 100 to 150 gal tanks.
Click to expand...

I kind of was thinking the same thing. I have a 50g tote sump running my 300g pond no issues there. I would like a larger filter just to put my mind at ease but honestly I do weekly 50% water changes and my nitrates are at 20ppm ish and 0 ammonia 0 trites on w/c day. Ive even missed a w/c on occasion and went an extra week with only 40ppm nitrates. I typically think bigger is better for filtration but have recently learned that isnt always the case.
Case in point a 65g the filter you see is the only filter on the tank. Sorry about the lack of background is but a holding tank.
I know the plants help to. Ive been doing a monthly w/c and weekly top offs. 0 ammonia 0 nitrite and about 20 nitrate at w/c.
But with rays you'll need more bio for sure.
Reactions: tlindsey
S

Seems like under gravel is the least recommended, your opinions on this?
G

50 gallon is more than enough for an overhead sump. I use a 40 on my 500. You can fill it completely with mechanical and bio. Large sumps are needed to catch the extra water when the pump is turned off on a conventional setup with the sump below. I use filter socks and pot scrubbers. My sump is not nearly full of pot scrubbers and has plenty of room to add more. 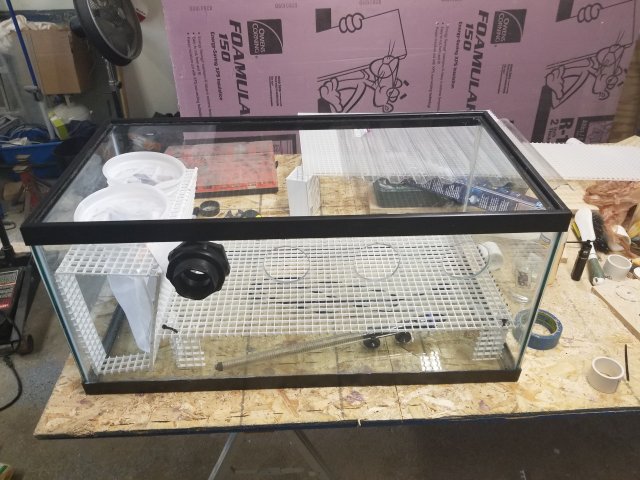 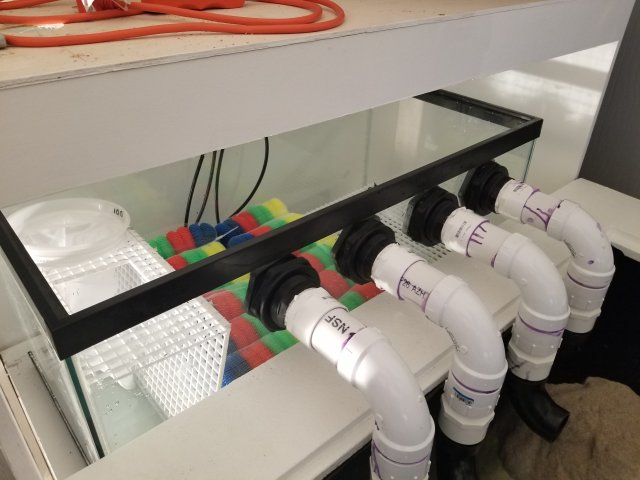 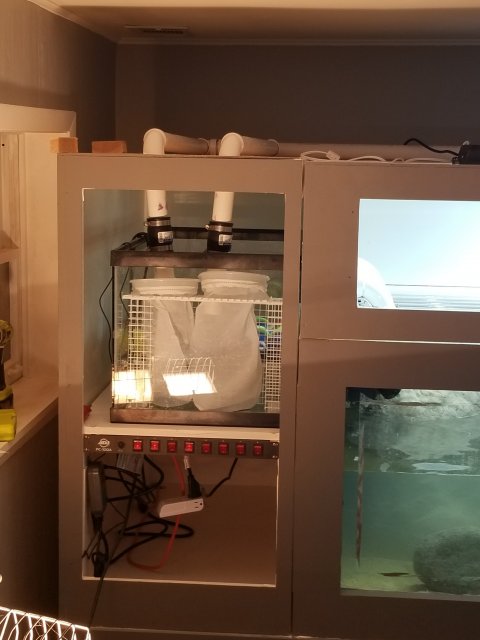 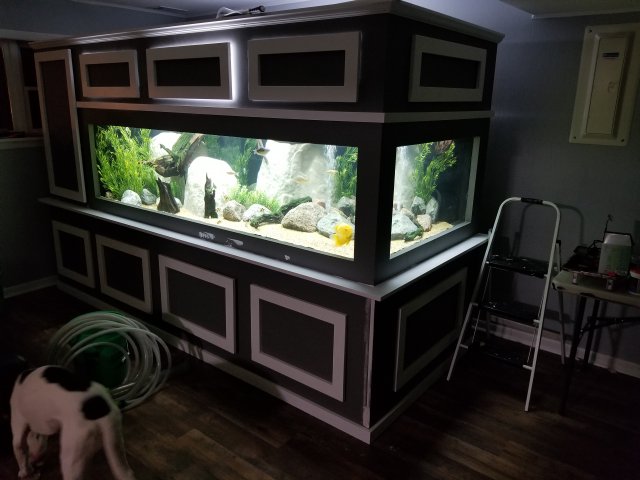