This thread is detailing the rigs that I USE. It is in no way directed
at telling people what they must use. It is set out to be used as a
guide and to show you the rigs that I use. If you wish to use them, then
feel free, if you want anymore information regarding the rigs, then
please don't hesitate to reply here or PM me.

There are a lot of people who like to try their hand at piking come the
winter, and I for one know that if a pike is handled incorrectly then it
could result in a dead pike, which nobody wants.

Below are the rigs and tackle that I use, they are very simple, but also
very effective, these are not all the rigs I use as there are variations
plus a couple of others that I use now and again, but for a beginner
this is what I would recommend.

This is very simple to use and to set up, you don't need any extra bite
indication as you will be watching your float.
The float in question is a egg shaped dumpy float, this aids the
Livebait as it tows the float around and stops the bait pulling the
float under causing false bites. 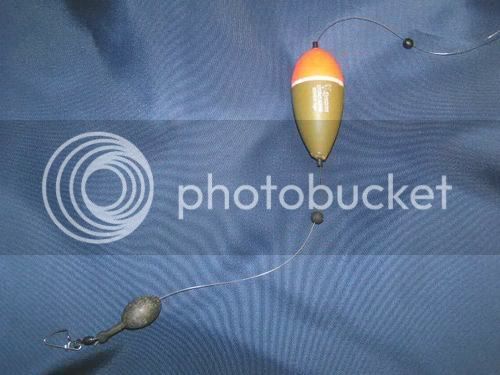 As I said its very simple to set up, all you need do is thread a bead
onto your mainline followed by your float followed by another bead and
then your weight to cock the float. 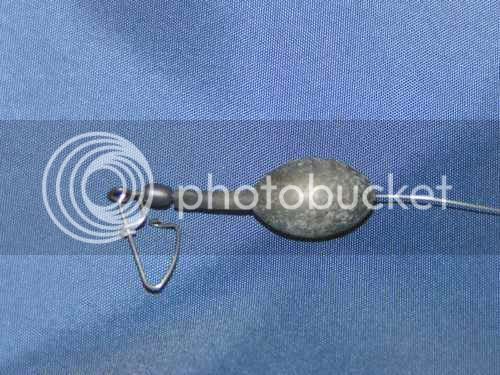 It is important that the weight used to cock the float is fixed to the
swivel, if it is not fixed then this can cause a problem is a pike takes
the bait but swims up towards the surface, the weight would slide back
up the line and the float would remain still, if the weight is fixed and
the pike swims up then the weight comes with it and the float lies flat
on the surface, and you know you have a fish on.
All that is left to do is tie a stop knot on your mainline (I use
power gum) at the depth you want to fish, tie a wire trace on and attach
your bait.
Don't over tighten the power gum stop knot as this can kink you mainline
which in turn weakens it. Make sure you moisten all knots before you
tighten them up.

This is exactly the same as above but the float shape is different, this
is because you do not need the added buoyancy to hold the bait up, as
your bait will be dead. 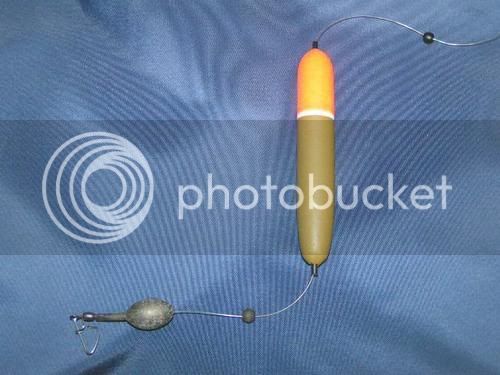 What is important to mention for all float rigs, (aside from a float
ledgered deadbait, as the float isn't supporting the bait) is to match
the size of float to the size of bait you are using. For instance if you
are using a whole mackerel you wouldn't want to use a small float as the
weight of the bait would sink the float. So as a general rule, the
bigger the bait, the bigger the float. Small baits such as smelt, roach,
perch, sprats can be used under a small to medium sized float, whereas
bigger baits such as herring, mackerel, larger roach need large to xxl
floats. You may also find that if you try liv3baiting that more lively
baits such as trout will probably need a larger float than would be
nessacary if it was dead, this is due to the trout being a very lively
bait and using a smaller float would have it pulling the float under the
surface every few seconds.

This is a rig I use when I'm roving around as I don't need bite alarms
or rod rests, I just cast out and rest the rod on my ruck sack.
Again the rig is very simple to set up and use, thread a bead onto you
main line, followed by your float (this will be a bottom end only,
waggler type, float), next thread a run ring and shock bead and the
attach your wire trace. Above the top bead you should tie a stop knot
using power gum approx. 2 - 3 ft deeper than the water depth, next attach a
2 oz lead to the run ring, 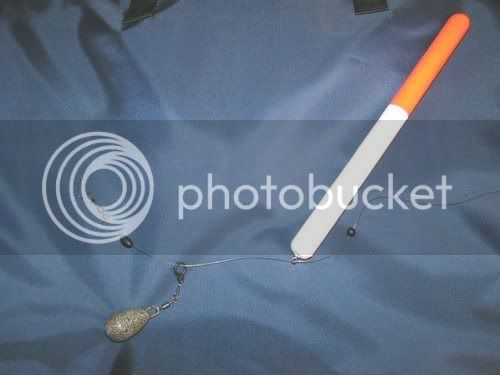 The idea of this rig being over depth is so that you can tighten down to
the lead leaving the tip of the float showing above the surface. Then
when Mrs. pike comes along and picks up your bait, if she swims away then
the float will slide under the surface, or if she swims towards you and
dislodges the lead then the float will lay flat on the surface, either
way you will know the pike has picked up the bait, watch out for signs
of the float moving but not going under, this could mean the pike is
just mouthing the bait, if this is the case, slowly pull the line tight
until you just dislodge the lead, moving the bait slightly in the
process, this could tease the pike into taking the bait, as it thinks
the meal is getting away.

Probably the easiest of all the rigs to set up, Quite simply thread a
run ring and rubber bead onto the line, followed by your trace, add the
required weight, 2 - 3 oz.
(I use 2 oz for most of my ledger rigs, although I will use 3 or even 4
oz if I need to hold bottom on a fast or flooded river) 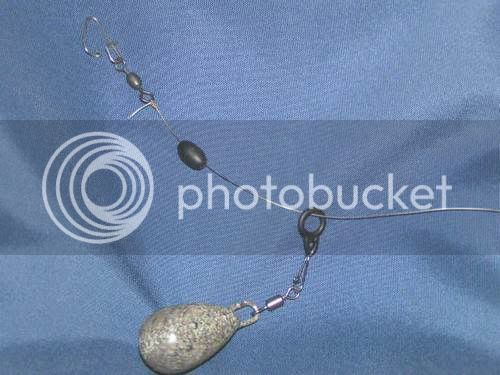 What is very important with this rig, is the bite indication. You must
have adequate indication as you need to see when the pike has picked up
the bait.
Indication is simple really, carp front swingers have no place here, you
want a drop off indicator, either electronic or just a plain and simple
clip on one.

This is explained more in the bite indication part below.

This is a slightly more advanced rig and a little harder to set up.
Firstly thread a stop knot, bead and float onto the mainline, next tie
on the swivel of an uptrace, this is a length of wire roughly 10 inches
longer than you main bait trace, this prevents the pike from picking up
the bait and swimming upwards and biting through the mainline, on the
uptrace you will have a run ring and shock bead, to the run ring you
need to attach a weak link, I use 8lb mono with a couple of knots tied
into it, you want about 3 ft of this so that your bait is just off
bottom, next to the other end of your uptrace clip on your trace.
This rig can be fished with a float on the surface so you can watch for
a run, or with the float under the surface used with a bite alarm set up
as with the above ledger rig. 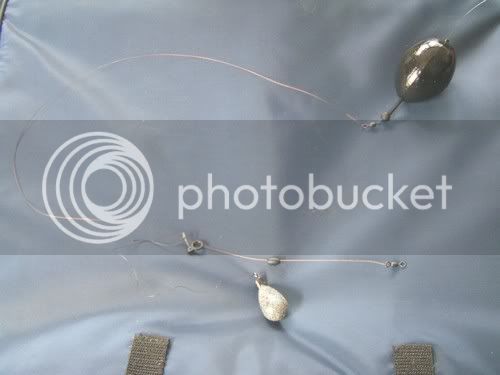 This is only slightly different to the standard ledger, the main
difference being a plastic boom of around 12 inches long, one end has a
run ring and poly ball the other has a clip for your lead weight. 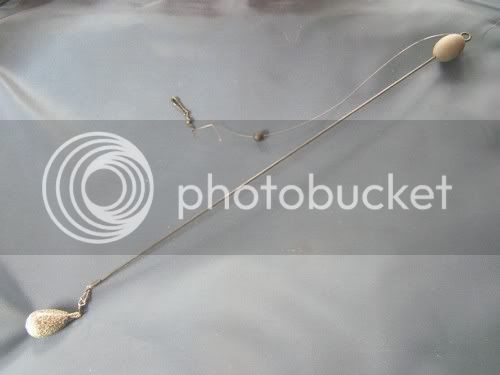 The idea behind this rig is to keep you mainline and bait away from any
bottom snags, weed or debris, fished along with a popped up Deadbait
(see next rig) you can keep you rig out of weed and in sight of the pike.
I use this rig for fishing the margins of the River Thames once all the
cabbage weed has died back, there is still some on the bottom, this set
up keeps my rig above this.

If I want to pop up a dead or live bait off the bottom to keep if away
from bottom debris, this I use this rig, it also stops livebaits from
swimming down and snagging up, making them more "active" and keeping
them on the move. 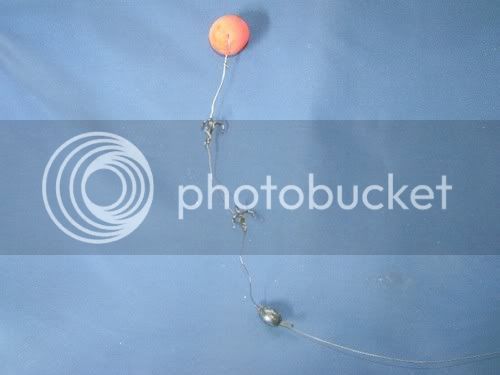 It is quite simply a fox pop up poly ball, with a small piece of flexi
solder wire wrapped around the top treble eye, I use wire so that the
pike cannot bite it off on the take.


That covers my basic rigs, and these cover 99% of my fishing. There are
some more advanced variations of some, but the above will cover all your
needs.

all infomation provided here was from another member on another board which i frequent​
Expand signature
www.ukfishingforums.co.uk ​
Reactions: Chris86
S

Got to put in there Nige Williams (Nige Williams, Masterline's pike expert and designer of the XTC range, catcher of 20 pike over the magic 30lb barrier, with a personal best of 40lb12oz.) rig caught me one last time out...... good on the alarms

All well and good dan, but with those float rigs-A WIRE UPTRACE MUST BE USED. Livebaits when often swim up then a pike takes them while their next to you mainline, in turn biting you off. This then 99% of the time results in a very slow death of a lovely esox. Seen and heard it happening many times....Barbless hooks, long handled wire cutters to cut hooks, 12" forceps and LARGE UNHOOKING MAT ARE A MUST TOO.

Here's another of my smaller pike...

jakethesnake;770436; said:
All well and good dan, but with those float rigs-A WIRE UPTRACE MUST BE USED.
Click to expand...

well aware of that Jake, if you look at the float rigs in the pictures you will see quick change clips at ther end of the rig which allows you to attach your trace !!!


jakethesnake;770436; said:
Barbless hooks, long handled wire cutters to cut hooks, 12" forceps and LARGE UNHOOKING MAT ARE A MUST TOO.
Click to expand...

I mean up traces, not just a wire trace. 16-24" of wire isnt good enough, the bait will often swim up then get taken along with the mainline causing a bite off.

how is that a small pike jakethesnake
Expand signature
-Chris

Hey you guys no of any good ice fishing rigs for pike?
K

jakethesnake;789285; said:
I mean up traces, not just a wire trace. 16-24" of wire isnt good enough, the bait will often swim up then get taken along with the mainline causing a bite off.
Click to expand...

what is that in the pic not a pike looks like a dark lake sturgon
Expand signature
LEGALIZE snakeheads
R.I.P Greenaveli June 13 1980 - March 31 2008
B

If you notice he is in the UK Not sure on the type of sturgeon but the color and shape is great I would really like to get over there after a couple of those. I fish in MN for sturgeon often they are among my Favorites!
C

Nice to see some good advice on Pike rigs,I think I have seen this before on another forum I use.
I have lost count of the number of time that I give advice on pike fishing and pike safety.
Might be good if there was some info on unhooking pike and the requirement to have decent equipment to unhook pike.
Expand signature
Preserve Wildlife Pickle a Squirrel