Had some scaffolding up the other day so I took the opportunity for a full pond pic from above. 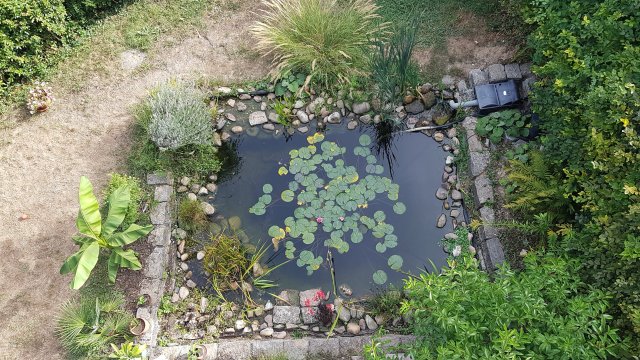 Planting the Musa Basjoo (a cold hardy yet barely edible banana species) on the left was a great idea as it gives some verticality to the whole layout + obviously looking very tropical.

Also took some pics of the bigger fish, excuse the awful quality but it's hard to photograph moving animals from above especially with the glare the sun produces. 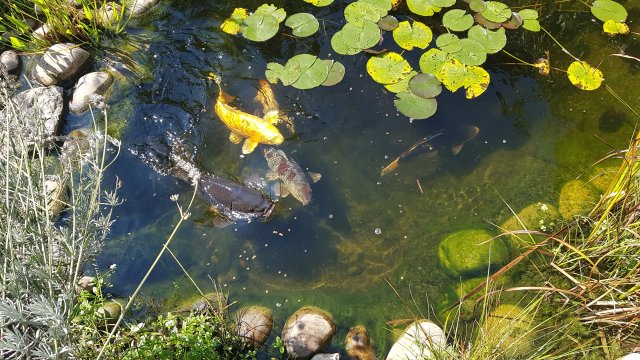 Group pic. You can see my mirror carp and all three koi, the one on the right I didn't get an individual image of since it's rather skittish and dark. It's a bit of a runt really, having stopped growing well before the others and as I said it's appetite and personality aren't that of the others. 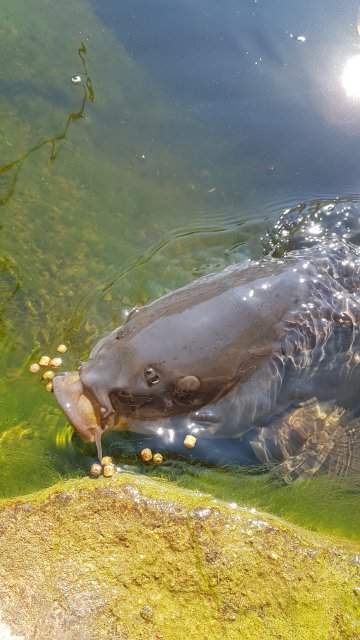 My big mirror carp hoovering up some pellets. My biggest and favourite fish ever. 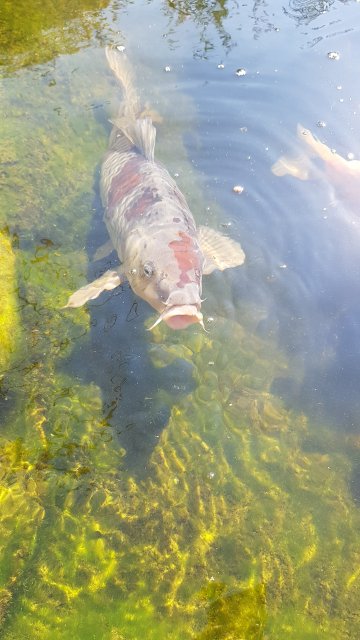 Ochiba Shigure. The youngest of my large fish at about 5 or 6 years. The other 3 I have had for a decade now. 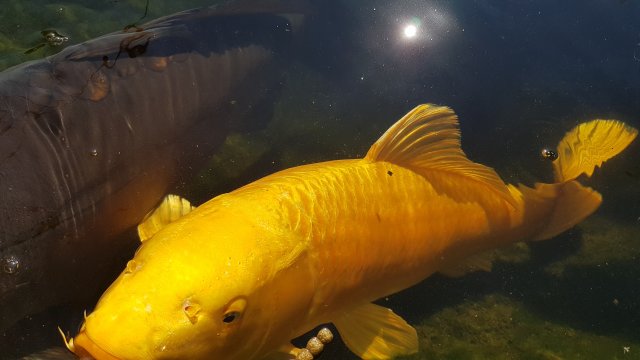 Yamabuki Ogon. As you can see it's not much shorter than the mirror but, as is typical for koi, a lot slimmer. 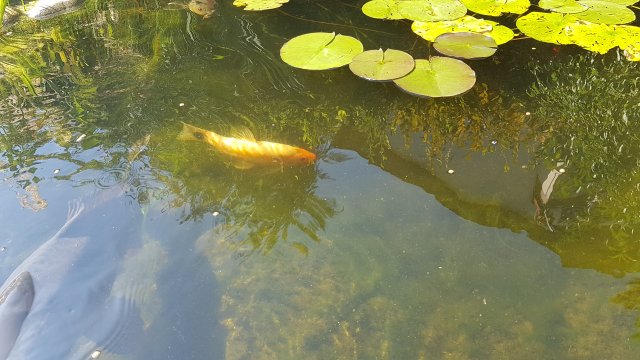 Terrible pic of my tench but I thought it's interesting since it has completely bleached and lost its golden colouration during this summer. Very common in goldfish and koi but the first time I've ever seen it in a tench. 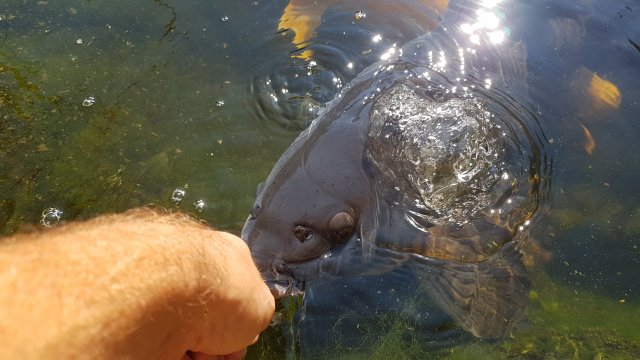 Hand feeding the Carp. For size comparison, that's my hand and I wear XL gloves. It's huge.

I also have a larger Rudd leftover from my old swarm which I can never photograph and a bullhead which I haven't seen all summer, I hope it's fine. 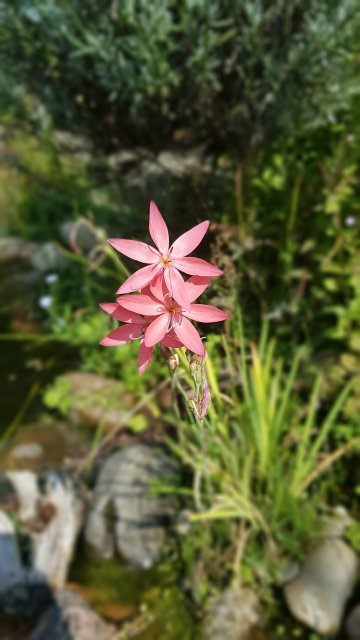 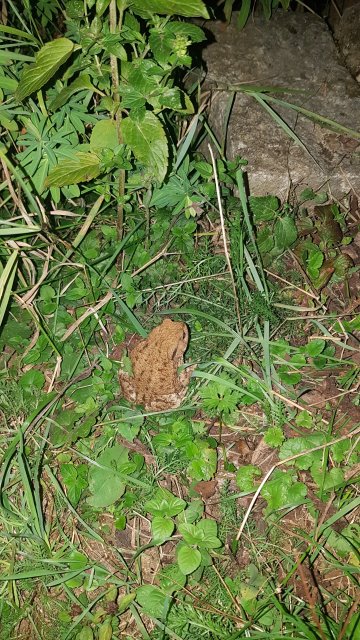 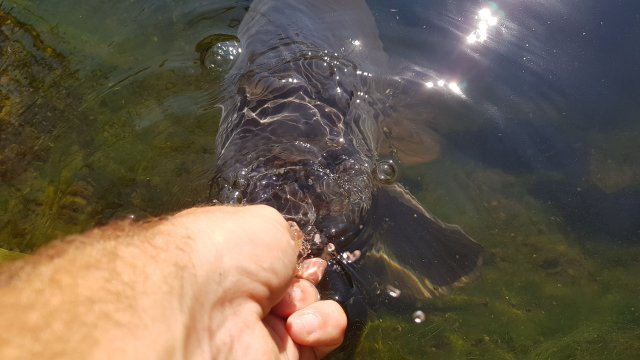 Cool stuff, Chubs! Great job! Your wels in there too?

Why possibly the last? Are you moving? Renovating the castle for sales?

This is tench as I remember it: 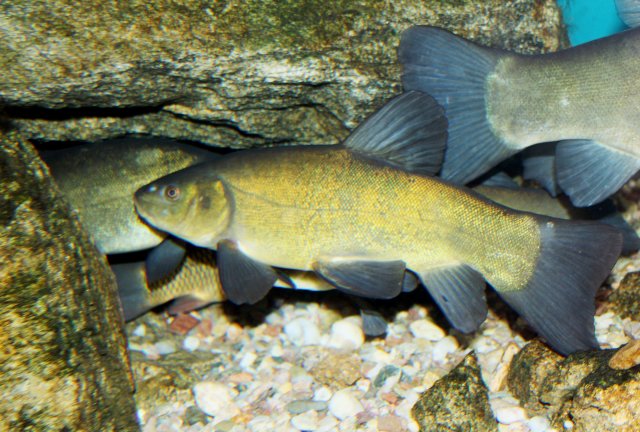 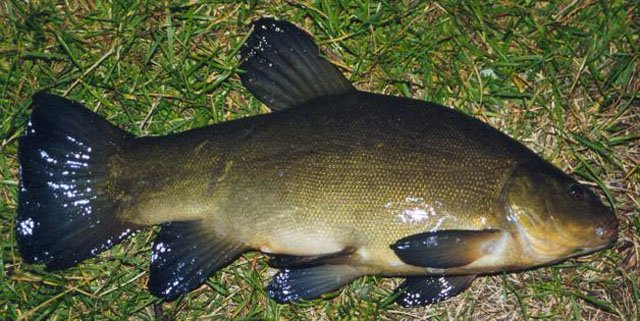 And here is the new one to me, golden tench. Is it farmed?? Do you know? 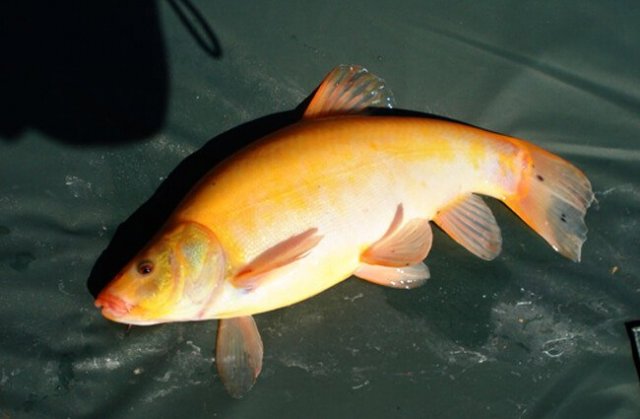 Super cool. The photos from above show the fish and the landscape very nicely. Very nice work, Thanks for sharing.
Reactions: Chub_by
C

thebiggerthebetter said:
Cool stuff, Chubs! Great job! Your wels in there too?

Why possibly the last? Are you moving? Renovating the castle for sales?

This is tench as I remember it:

And here is the new one to me, golden tench. Is it farmed?? Do you know?
Click to expand...

Thanks, Viktor. Yes, I will be moving soonish - the pond will stay in the family, but I will sell the fish and it will be ran as a nature pond to reduce maintenance and costs. As for the Wels, you will remember me debating as to getting one or not. In the end I told myself that I wouldn't get a normal or albino one, but if piebalds ever hit the market I would pull the trigger and go for it. Well you know how life plays out sometimes, the first time they were on offer here was incidentally not too long ago when I already knew about my impending move.. unfortunate timing.

The golden tench are farmed for ornamental ponds and occasionally stocked in fishing ponds (especially in the UK). They've come down in price a lot here, so I wouldn't be surprised to see them on US lists soon, provided they're still legal over there.
Reactions: Fishman Dave and thebiggerthebetter
C

FJB said:
Super cool. The photos from above show the fish and the landscape very nicely. Very nice work, Thanks for sharing.
Click to expand...

Thank you for your kind words

Cool photos. Building a new pond at the new place I hope.

Expand signature
I got 99 problems and a fish ain't one
Reactions: Chub_by
C

Thanks mate.. I wish

Chub_by said:
Thanks mate.. I wish

What do you mean you wish? Teasing? Getting out of the hobby? That'd be unacceptable, immature, preposterous, asinine, ridiculos, and... and... I am at a loss of words.
Expand signature
My DIY Public Aquarium build http://www.planetcatfish.com/forum/viewtopic.php?f=4&t=33968
Vids & pics on MFK http://www.monsterfishkeepers.com/f...scue-naples-fl-two-4500-gal-13x13x4-5.603969/
My databases http://www.monsterfishkeepers.com/f...ting-f-w-fish-by-continent-and-family.660258/
Reactions: Fishman Dave, Chub_by, MatteoTheEnder22 and 1 other person