Rescuing a 12" barramundi and temporarily housing in a 100g

Hi there all,
I used to be on these forums way back in the day (around 2010) and let my account lapse whilst taking a break from the hobby.
Getting back into it in a big way, have had a 220L planted aquarium for about 3 years now. Home to a mated pair of angels, a small school of both red blue colombian tetras (7 of each) and rummynose tetras, a school (6) of bronze and black cories, 3 plecos (two peppermint sailfin bristlenose and one L397), two featherfin catfish (for now, just got em, going in the 100g once they grow a bit).

I also just picked up 4 leopard angels, which are currently in my 100g with 2 siamese flying foxes. I can put all of them in the 30g I am planning to buy next weekend. My problem is as follows:

I found a great deal on gumtree (local marketplace for australians) and found a 30g tank, light, filter and stand for $120. It was even in my neighborhood. The only catch was, it has to come with the fish.
It currently houses a 30cm barramundi named Bazza, a 20cm goldspot pleco and a 10cm featherfin catfish.

My question is, how long do I have to rehouse the barramundi? I know they grow super fast, and will eventually kill anything that will fit in their mouths (big bastards hit over a meter in captivity, and I've seen a mate reel in a 2m one before, was about 50kg).

I do plan on building a pond, but that's an eventual goal (about 6 months to a year from now), and I was planning on it being around 750-1000g. Only problem is, I want to have jade and silver perch with some local catfish in there, and I don't think having a barra in there will allow for much else.

Unless there is somebody around the Sunshine Coast of Queensland who wants to take him?
I'm happy I can temporarily rehome him, but building a pond just isn't feasible at this point.
I'm going to post him on gumtree for like 20$ (dislike that idea, somebody could lie about what size tank they have), and call around to some LFS (and perhaps the aquarium down in mooloolaba, but I'm not hopeful on that front).

Thanks, and happy to be back. Will post pics of my tanks in the next couple of days. 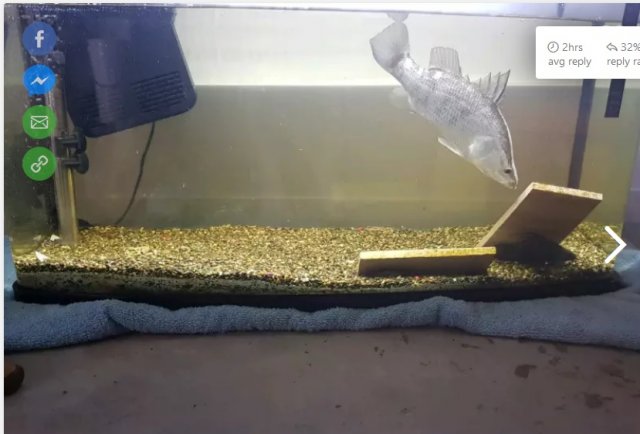 So a bit of an update:
Been fires everywhere on the Sunshine coast for the past week, been busy trying to keep my house from burning down.
Everything has finally been put out (we had about 15 fires, most of the result of arson that spread), so I picked up my buddy Bazza today.
He is happy and acclimating well, and whilst my angelfish are annoyed at being downgraded from a 125g to a 30g, they can cope with it (only 4 of them and 2 flying foxes).
The gold spot pleco looks really good, the featherfin is an impressive size and the barra is just... a monstarr.

He's a bit runty for a 6-9 month old barra, but once I get him on a proper diet, he's gonna grow like crazy.
I have five options for homing him long term.

1. Build a pond (planning on a 7000L, got the space for it as long as the council doesn't crack the ****s)
2. SEA Life in mooloolaba is looking for big barras (local aquarium with a native tank)
3. Advertise online and see if anyone wants him
4. Buy a bigger tank
5. Tag and release (Part of a QLD govt program)

EDIT: I also purchased 12 jade perch (grow to about 30cm) which will eventually grow up to go in this barra tank, and will either stay there for a year until I build the pond or somebody takes them (SEA life said they will take them with the barra, or I can give them to a farm with a dam; they are the most popular australian aquaculture fish besides barramundi).