I've had my lenticulata for about 3 weeks now. He's always been skittish and it seems to be getting worse. He used to hide when I walked by the tank, but would come out after a few minutes and let me approach the tank slowly. Now he goes and hides behind the sponge filter when I come down the stairs about 10 feet away and rarely comes back out if I'm in the room.

He's by himself in a 40 breeder (he'll be moved to a 135 when he's bigger - he's about 8" long now) with a few pieces of driftwood and Indian almond leaves. The tank is in the basement and there's very little traffic or activity in the room. He usually hides behind the sponge filter, but hides behind or under the driftwood sometimes too. I've got some PVC pipe that I need to cut to give him another hiding spot.

Dither fish would probably help. I've got some silver dollars that were meant to be dithers, but I bought them before the pike and wound up getting a larger pike than I'd originally planned. The SDs are big enough (~2-3") that they wouldn't have been eaten by the younger lenticulata, but my pike might be big enough to eat them. I tried adding a few giant danios last week, but they wound up being a very fancy dinner.

He's eating so it's probably not an emergency, but he doesn't seem happy either. Any suggestions on ways to make him more comfortable and outgoing? 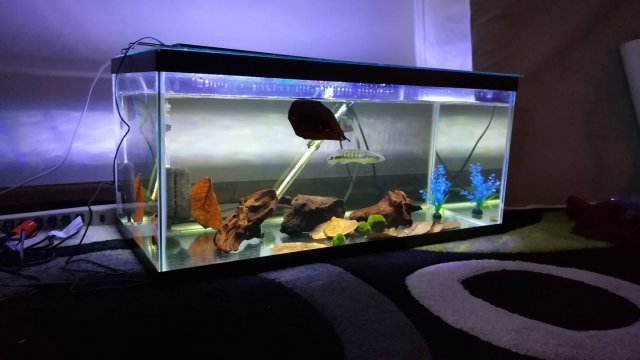 It would help if there was more traffic and in the room, but, there's no point in adding extra traffic if no one regularly frequents the room.

For now, keep the light above the tank off. Just use ambient room light. This will allow them to see better outside of the tank. Sort of like having tint on a window, where it's easier to see outside during the day, but you see yourself on the window at night until someone gets to close to the window.

After that it's just a waiting game, could be another month in that tank. Don't bother with the dithers if you feel they would get killed in such a small tank footprint.
Reactions: Seedy J

Interesting... I figured less traffic would let him relax more, but what you say makes sense. He'd get used to having people around with more frequent traffic. Maybe I'll let my kid run around down there more often

I just got the LED light last week and I leave it off most of the time. Going forward I'll just use it when I'm cleaning the tank until he gets less shy.