So you want to keep a RTC (Red Tailed Catfish)?

I have decided to create this thread to inspire or deter people from buying a South American Redtail Catfish.

Range: These guys are found in the Amazon, Orinico, and Essequibo Rivers.

Size: The world record was caught in 2008 at over 60" and weighing over 121lbs! Other fish that were not caught by rod and reel have been reported over 70 " weighing 170lbs.

Here are some pictures. 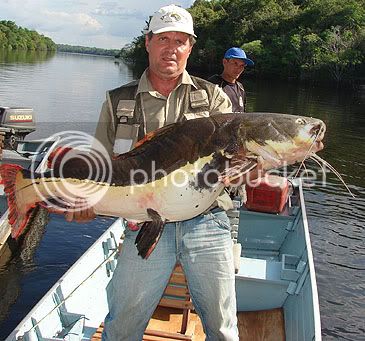 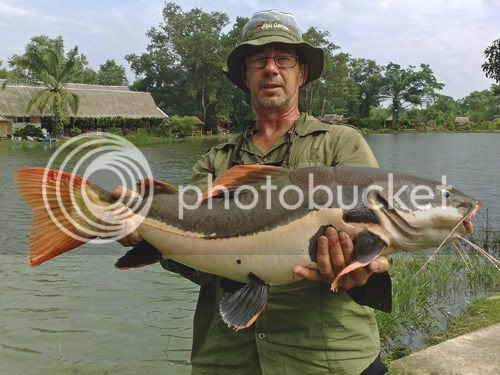 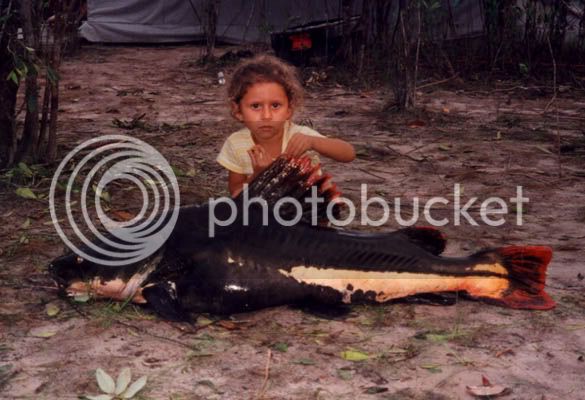 So you still want one?

In the Aquarium: In the home aquarium, these fish CAN and WILL grow an INCH A WEEK when they are young. They will often hit the 2 foot mark within the first year.

Diet: The Redtail Catfish is far from picky when it comes to feeding. They will often eat right out of their owners hand and beg for food. Diets should include Hikari Carnivore pellets, cut fish, cut meat, shrimp, worms, crayfish, etc. DO NOT FEED THEM GOLDFISH. There is no reason to feed your RTC feeders. They carry diseases and have no nutritional value. Giving them feeders is not only bad for them, but will also kill your wallet.

Water Temperature: Should be kept between 75 and 83*. The warmer the temperature the faster your fish will grow. Do not go too high or the fish will have trouble breathing.

Water Quality: Redtail Catfish need pristine water since they are very sensitive to ammonia, nitrites, and nitrates. This is the biggest challenge in keeping these guys as they are messy. They will often release their slime coat and are known to occasionally throw up a meal. If this happens you must clean it up immediately by doing a good size water change.

Filtration: RTC's need top of the line filtration to keep them healthy and happy. Canister filters and Sumps seem to work best, paired along with HOB power filters. Be careful not to have small parts of filters inside the tank as they WILL get eaten.

Substrate: The cleanest and easiest substrate to use is none. I do not like the looks of a bare tank so I use sand. Do not use gravel and small stones as they will eat them.

Tankmates: Your best bet is to keep these guys alone, but if you must have a tankmate, make sure it can't fit in the RTC's mouth. They have been known to eat tankmates over half of their length in size. There have also been documented deaths due to the RTC trying to eat a tankmate and choking because it was too large. Some owners keep their fish with Pacu, Peacock Bass, other large catfish, Rays, and even turtles. After losing two peacock bass and an oscar to mine, I have decided to keep him alone until he goes into a pond.

Strange Behaviors/Deformities: The RTC are known for some of their weird and wacky behaviors. One of the most common is begging for food. Some like to be pet... thats right, pet. Kinda like you would to a dog. They are also notorious for swallowing anything they can fit in their mouth. Rocks, filter pieces, thermometers.... anything at all. Then they do the inevitable... throw it back up. If your fish swallows something do not panic. This is pretty normal for them, just make sure you don't feed them until they get it out. RTC's are also prone to gill curl, a problem when the gills curl outward making it tough for the fish to breath. It is thought that this is caused by poor water quality, but may also be genetic. Mine had it at 2" making me think that he was born with it. There are different techniques ranging from sedating the fish and massaging the gills to actually surgically clipping the gills. Here is a link to how I treated mine.

Closing: The South American Redtail catfish is a beautiful creature that makes a wonderful pet if you have the resources. Please do not buy one unless you are committed to giving them the best life they can possibly have. Thanks for reading.

not thousands. millions! i spend $50 every week feeding mine! i have 2
Reactions: EntoStentor and imabot
T

Yes I still really want one, but I know better.
Expand signature
I remixed a remix, it was back to normal.
D

Woa what are you feeding??? I've only spent about $10 feeding mine so far since I've bought him!! He only eats about 1 shrimp per sitting right now tho cuz of his size.

its a different thing to wanting one and buying one

i want a gigas but I'm not going to buy one

only dead fish go with the flow
J

T1KARMANN;4342532; said:
if you have every intention of getting the big tank GET THE BIG TANK 1st THEN BUY THE LARGE FISH YOU WANT whats the rush its not like they grow slow so the big tank wont be empty for long
Click to expand...

I agree...fish like RTCs will always be there for when you do get that big tank.

I do like them a lot...would be pretty neat to have a RTC pond in my living room...hmm...

i have 3 of these and am building an atrium on my property with a pond over the next few years to house the massive beasts....and it will be home to many of my large friends
my goal of coarse ...arapima gigas but not till im set up and ....where to get one any way?
imposible
Expand signature
MFK JARMY

Oregon, it's part of 'Murica!

Its to bad they don't have a catfish that looks like these that stay under or around a foot. I love the way they look but I'm not gonna invest all that money into one fish.
Expand signature

Kids, you tried your best and you failed miserably. The lesson is, never try.
Click to expand...