WSU has a fisheries/aquaculture lab that may be interested in conducting disease culturing/testing. If anything, to allow students the experience and practice.

Dieselhybrid !!! I'm terribly sorry for your loss, but you sure did turn it into something positive for the community as a whole. Thank you for this comprehensive write up.

Edit- I also shared this to the MFK Facebook page, but for reasons I haven't figured out yet, FB posts about threads seem to get unusually low traffic.

Dieselhybrid this is now a sticky. Sorry for your loss but thank you for turning that into a contribution for your fellow fish keepers. Two thumbs up
Click to expand...

Dieselhybrid .. being a sticky doesnt allow such valuable information to get lost among thousands of threads....
Reactions: Bigfishnut

Dieselhybrid !!! I'm terribly sorry for your loss, but you sure did turn it into something positive for the community as a whole. Thank you for this comprehensive write up.

Edit- I also shared this to the MFK Facebook page, but for reasons I haven't figured out yet, FB posts about threads seem to get unusually low traffic.

You are welcome and thank you Rob! We are grateful to share this learning experience with everyone and appreciate all of the useful feedback and information. The support and wonderful advice here on MFK has helped us to improve over the years as we have grown in the hobby. This place is all about learning and we are pleased to be in a position to contribute back as MFK has helped us so much over the years.

Dieselhybrid .. being a sticky doesnt allow such valuable information to get lost among thousands of threads....
Click to expand...

You are welcome Maria, and thank you for being a great "virtual" friend from across the globe. Your positivity and enthusiam is absolutely refreshing in a hobby full of ups and downs

Thank you everyone for helping turn a tough loss into something positive. Sometimes that's what life is all about, and it's always easier with great people supporting you.

At this point, things have stabilized. There have been no other losses or signs of illness in any of our tanks and systems. After continuous observation over the past few months I feel this was an isolated incident.

I believe the algae bloom on the source lake water was possibly coincidental with its timing as there were no fish die-offs observed or recorded. It possibly was a factor but at this point undetermined.

My best guess is that the death was related to the large number of massive eggs inside of the fish. They took up a massive area in her body cavity and there were dozens of various sizes. From the size of golf balls down to the size of marbles. Freshwater Stingrays generally absorb unfertilized eggs. I suspect this hybrid female may have had issues finding a balance between egg production and absorption, as the number and size of the eggs was very surprising. Without many other female freshwater stingray dissections to compare with, it is difficult to know if these eggs and possibly other organs were unusual in any way. Hopefully this thread can become a resource for future comparisons


I hope this thread has been of some benefit. If anyone would like to contribute please feel free to do so. Document and share. Most importantly, be safe.
Last edited: Dec 20, 2017
Expand signature
Welcome to your new addiction
Reactions: kewpiefishypewpie and spotfin

So, I lost my big female hystrix on Tuesday. Not sure what happened to her. Briefly- about a month and a half ago I fed my rays some silversides that I collected. She ate the most (as usual) but I noticed some swelling between her eyes and front of disc the next day, and she stopped eating. All returned to normal about 3 days later. About two weeks ago I fed them the silversides again. The next day, the swelling started to return. This time is only got worse and her whole body started to swell. She never ate again, and passed Tuesday evening. Not sure if the silversides had anything to due with her passing or if it was coincidence. The other two rays have not been affected.
Here are some pictures of the autopsy. It was crude but that's what you do at 11 at night with a razor blade and pliers. She was about 14" diameter and weighed 9.2 lbs. You can see in the second picture how bloated she was. I didn't find any obvious issues with her, other than the swelling. I wonder if perhaps kidney functions were an issue, thus the excess fluid?
Lots of eggs at various stages, but she was not pregnant.
Any thoughts on the size/color of her liver?
I did not dig into her respiratory or circulatory systems.
Nothing in her stomach or intestines except a small amount of green fluid. 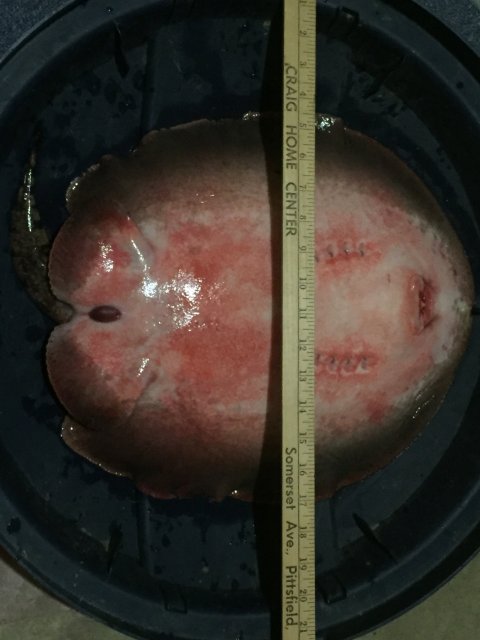 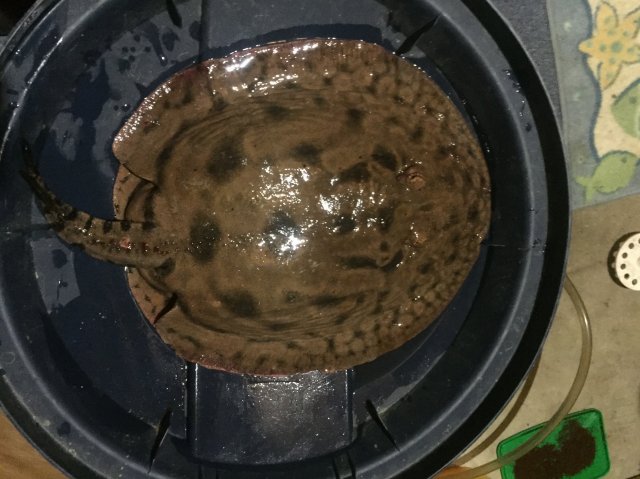 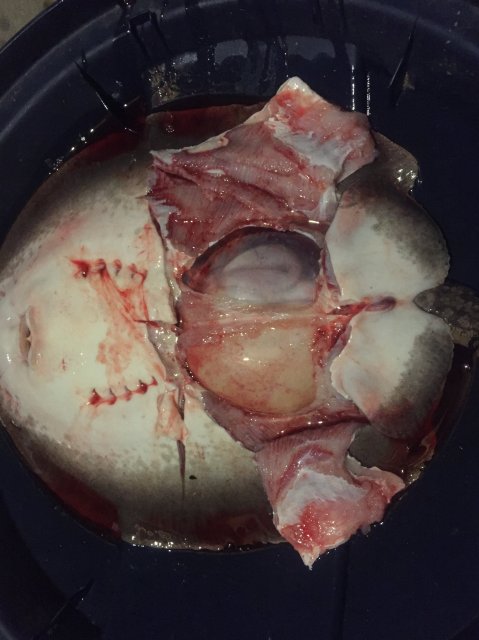 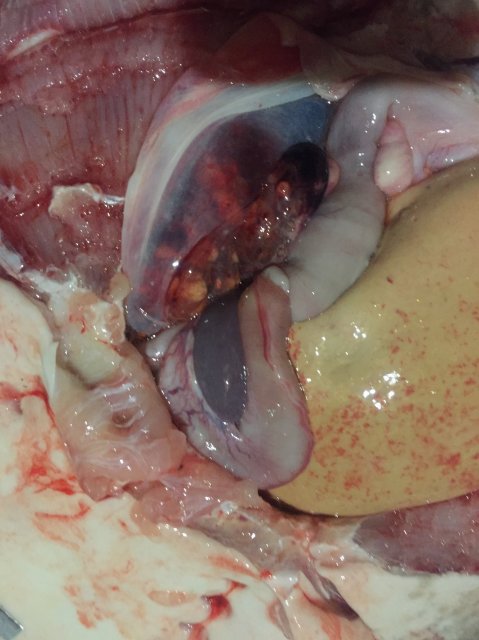 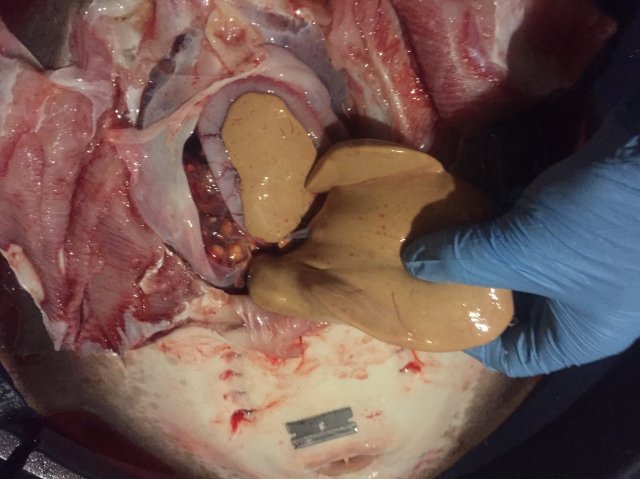 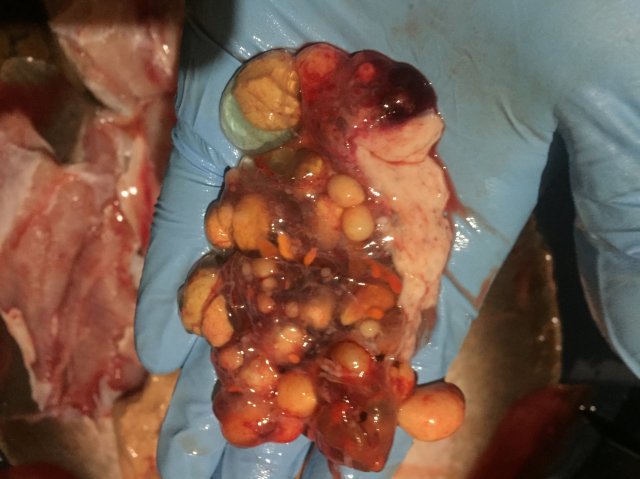 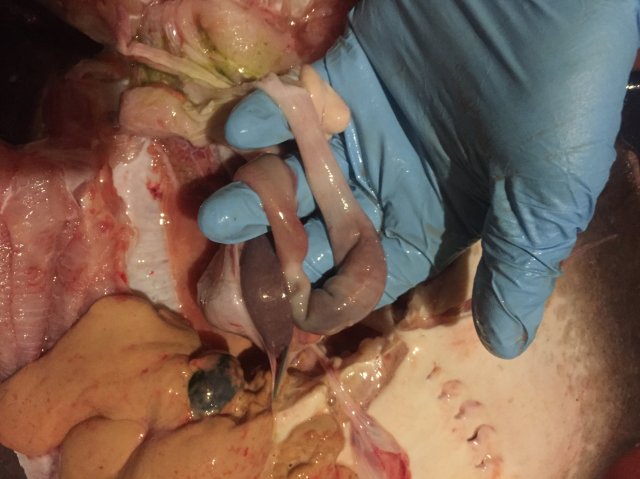 Expand signature
"The gods do not deduct from man's alloted span the hours spent in fishing."
Reactions: Dieselhybrid

I am sorry for the loss Jason. Thank you for sharing your experience and photographs.

The photos look fairly consistent between our two females. They are different species but about the same size. The difference that stands out to me the most is the size of the eggs.

How is the rest of the group looking?
Expand signature
Welcome to your new addiction

Glad to share, although not under the best circumstances. As with your pictures and experience in the thread, hopefully this will add something to our knowledge of rays.
I was interested in the eggs as well. Many in there, but most were small compared to the ones you saw. She gave birth to the last litter a year ago. They always mated in the late spring/ early summer. The male went through his typical actions in May, and then left her alone. I figured she was pregnant but not the case.
The other rays are fine. Nothing different with them.
Also, perhaps related, this ray was 10+ years old. I purchased her in February of 2009 at 6" or so and wild caught. I would assume she was at least a year old at the time.
Do, and will, miss her.
Expand signature
"The gods do not deduct from man's alloted span the hours spent in fishing."
Reactions: Dieselhybrid

I have bloating with my hystrix as well. Lost 2.. about to loose a third. 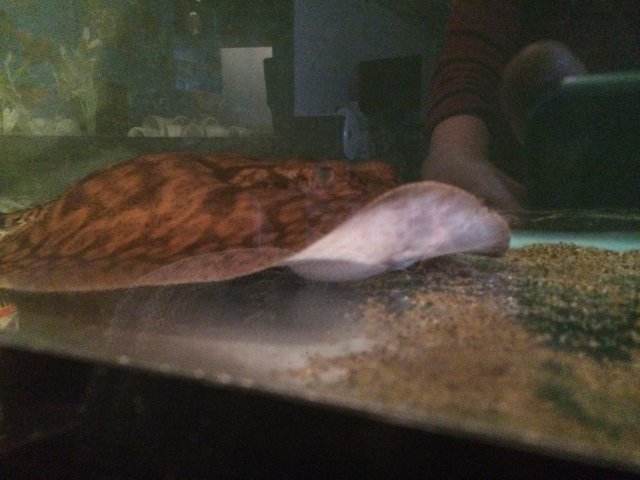 Male that I lost 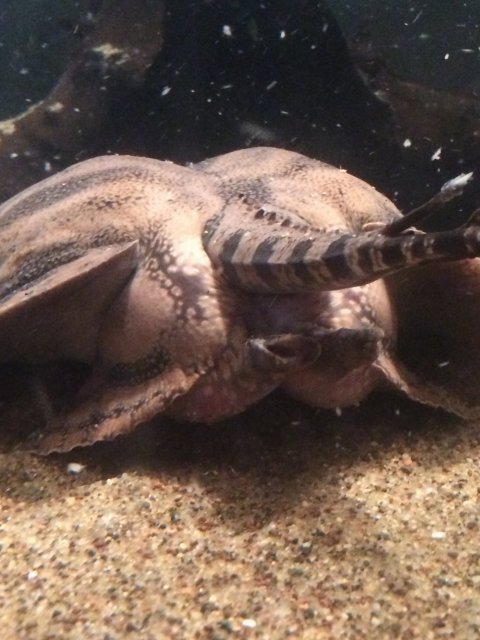