Polyaddict86 said:
Funny thing to me is that they did a study on taxonomy but didnt even do a DNA test. They claimed that they had 148 specimen and they did dorsla fin counts and other stuff and decided that pbl, pbb and western lap are all the same polypterus bichir/PB, but they are unsure why the coloration are different.

To us hobbist we can tell that pbl and pbb are way different from western lap which are koliba,koloton and faranah lap.
Click to expand...

148 specimens they have... Probably most dating back to the 1800s. I guess the KPBBs were the thing that could have gotten us what we needed in terms of scientific funding, it's just that they didn't "boom." Imagine a DNA pool that could have been made available to science.

A good example of this are the advances made in the field of scleropages formosus were all privately funded. Like how the only way to 100% determine the gender of an Arowana is through DNA testing, made possible by funding from MAFC in line with their efforts on "conservation engineering." This concept was taken in by QH and they started actively adding to the genetic mapping pool to -guess what- create genetically engineered "Designer Arowanas." Too bad the head of that project was caught smuggling Arowanas into Australia. Not sure where they're at now. But you get my gist.

The bottomline is, in an industry like this (let's face it) science always takes the back seat and while big businesses drive; because the only language that is a constant is money.

Disappointing for us hobbyists really. It's a hard pill to swallow.

We can still call our PBB's as P. Bichir "Bichir" and our laps as P. Bichir "Lapradei" - we've been doing it for ages anyways, that's why we have Koliba, Faranah, Tikinsso, Koloton, heck, you wouldn't call a Dabola an "Endli" or a "Lap" right?
Reactions: Polyaddict86

Pick one that you have an interest in. Page numbers listed. Advisable to read the Discussion segment towards the end on Page 91. I included a screenshot below. Appears the study is preliminary at best and further updates is necessary, lol. 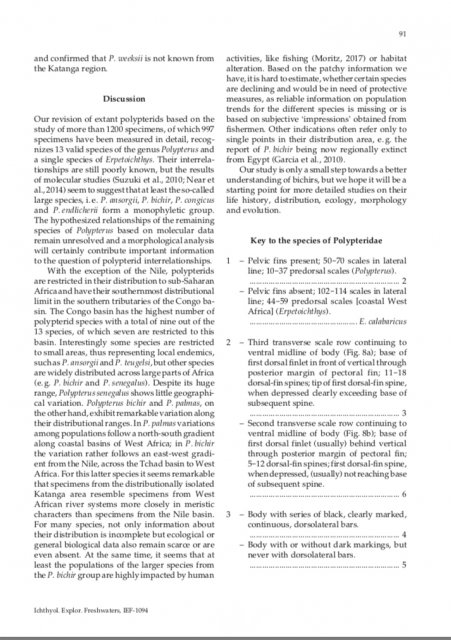 2 issues. Being wrong about something so obvious when talking about the upper/lower jaw in juvies and the excuse of over lapping data when speaking on finlet counts was enough for me to disregard. I can see eastern laps MAYBE but no way are flaps and koloton/koliba the same fish as pbb.

Several times it appeared he was taking jabs at schafer for no apparent reason.
Expand signature
Beware that, when fighting monsters, you yourself do not become a monster... for when you gaze long into the abyss. The abyss gazes also into you ■-Friedrich Nietzsche