Wondering if anyone has experience with an eye issue like this... I have seem something similar on my angel fish, and both times I did, the fish recovered on its own over a couple weeks with no treatment beyond additional water changes. This trout has had a lump on his eye for a couple of months now. It is difficult to see from this perspective, but it protrudes off the eye lens about 3mm, it is roughly semi-spherical, like a blister on the eye. I had considered trying to scrape it off (would have to anesthetize the fish do do this safely) but I am not sure how integral it is with the lens, and I am afraid of doing more harm than good. 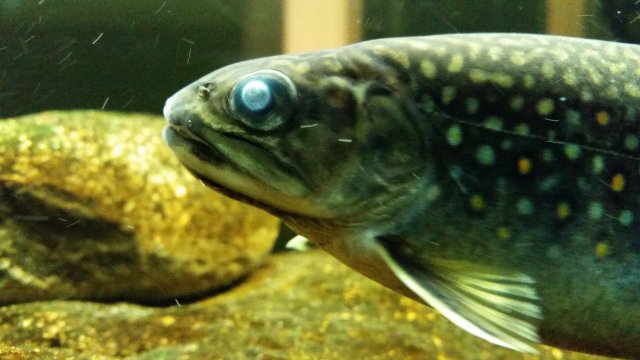 About a week ago, this fish attempted the procedure on his own... I have the lights on a dimmer, and when I turned them up in the morning, the fish spooked (not normal...) and jumped hit the plexiglass lid at a seam were two pieces meet. He manages to scrape his eye bulge on the edge of the plexi (I guess...) and I took this video moments later. The rim of blood at the bottom of the eye was present for a few days prior to the trauma, but the blood under the lump was a product of the trauma, and you can see it streaming/coagulating(?) out of the damage in the video.


Unfortunately, the bump survived the trauma, and has "healed" back to a state very similar to the original photo, only slightly less smooth, with evidence of the tear from the video. There is no longer any evidence of blood anywhere in the eye.

ANY THOUGHTS??? Do you think I could successfully scrape this off of the eye? I do have access to an experience using anesthetics for fish, which would be a must.
G

I believe it's a cataract. My black wolf fish has one and a large 18" dovii at one of my LFS has one. Seems to not affect the health of the fish but the fish is more than likely blind in that eye.

GreenTerror7 said:
I believe it's a cataract. My black wolf fish has one and a large 18" dovii at one of my LFS has one. Seems to not affect the health of the fish but the fish is more than likely blind in that eye.
Click to expand...

Thanks, GT7. This is what I have also suspected, but I was surprised at how little information I could find on causes and treatments. I know I have seen many brookies in the wild with one white eye, especially in dense populations. "F" is currently the largest fish in the tank, holding the premium position for feeding and feeding well. He seems healthy in all ways other than the left eyeball... I do suspect that he has lost the last bit of vision out of the left eye, maybe except a sliver of vision of above. Another of my small trout has very small specs of white in each of his eyes, and he is beginning to show signs of stress, reduced feeding, and dark pigmentation. Even though his vision is probably only slightly reduced, the fact that vision is reduced on both sides may significantly enhance effects.
G

Yea my wolf eats just fine and isn't affected by it. To my knowledge, there are no serious endangerments to the fishes health

I would treat with epsom salt and erythromycin in a hospital tank.
Expand signature
Tom

Aquanero said:
I would treat with epsom salt and erythromycin in a hospital tank.
Click to expand...

Just as a dip? I can't keep a second tank chilled, so it would have to be dips, and I struggle to justify the handling stress back and forth. For now, the fish seems healthy and active... I am going to continue to watch. Her typical position puts that in the front of the tank, making it easy to observe.
You must log in or register to reply here.
Share:
Facebook Twitter Reddit Pinterest Tumblr WhatsApp Email Link
Top Bottom