Got three at the moment.

The other bigger one was donated also about 2 years ago from an overcrowded 400 gal tank with six or seven 2' fish in it. It has also done well here. It has the misshaped-snout defect, called "duck bill" or "camel face". Common in these man-made food fish. What we get in the trade are the culls, garbage-gene specimen, from the aquaculture industry in South America.

These two are the greediest and most assertive at the feeding time fish in 4500 gal apart from arapaima. Smart too. They know where and how feed enters the water better than any other fish in the tank!

The third named Hercules was donated about half a year ago at 1'+ and has reached 1.5' in a 240 gal. It took it some time to figure out the diet and get used to it but now it is a hog. Doesn't want pellet though. All about thawed fish. He is starting giving hard time to the false piraiba housed with it, so I am not sure how much longer it will stay in that 240 gal.

The one from Dayton come from Gerbers? That’s my LFS and he will take in any fish regardless of the size. Lately, I think he’s been working with

bigrich545 and his fish rescue to provide adequate homes for the monsters he takes in. The largest tanks at Gerbers are 265’s, but the larger fish are usually kept in the 4ft by 4ft tubs.

Next time you’re up in Dayton, let me know. I’ll buy you a beer somewhere.
Reactions: thebiggerthebetter

Haha, thanks bro. I appreciate the sentiment.

This was my first time in Dayton, and who knows, could be last too. I did live not too far from Dayton in Bowling Green, Ohio for 5 years when I did my graduate studies at BGSU.

JasonGoneFishing set up the rescue. Many thanks to him. The target was 6 paroon sharks but I also took 8 RTC, 7 pacu, and this hybrid.

Hercules, the smallest and youngest rescue hybrid, had been moved out of the 240 gal and has spent several months in the less aggressive 4500 gal and grew very well in there because he was outcompeting all tank mates for feed. A brazzen fish. This earned him a one-way ticket to the other 4500 gal with the big dogs.

And there he stopped feeding cold turkey. At first I thought it was the stress but later on I started to realize he has probably been ill, perhaps with the same bug that has been sickening some and wiping out others in my tanks for the second half of 2018. Got pretty skinny but lately after another several months started feeding little by little, far from his usual vigor but it's moving in the right direction.

One of the bigger ~3' hybrids, the one with a duck bill deformity, has developed this strange body shape where it's as if it is carrying a huge load of eggs but the distended rear portion of the tummy hasn't changed in a year and the fish feeds and behaves as if nothing's wrong. IDK what to make of it. Perhaps it is related to its poor genealogy reflected in the deformed snout.

The rescue from Dayton with a straight snout, now ~3' too, has been doing well, no changes to report.

Hercules has gone to live in Boca Raton with Rodrigo at Predatory Fins. Just seen him yesterday at Rod and Lisa's at the Florida Monster Fish Bash 2019 in their 12,000 gal.

The deformed hybrid. It had been feeding less and less in the last half year or a year, I thought it was on the way out but two days ago I treated the tan with Microbe Lift Broad Spectrum Disease Treatment (Malachite Green and formalin based) and all of a sudden he became an aggressive eater. I don't know yet what to make of it.

The sudden jump in the feeding of the deformed hybrid hadn't lasted. It's stomach bulge became bigger and it stopped feeding and passed away in a couple of weeks after that.

The strange posterior abdominal bulge was merely a collection of reddish fluid.

As I suspect, outward deformities or mutations are always accompanied by inward ones, messed up internal organs, nervous system, immune system, you name it. Plus this fish had a rough time in its prior life in its grow out 500 gal tank where the biomass was 1/5th of the tank by weight it seemed.

Anyhow, this is the end of the road. Final size 36". With us for about 3 years, plus perhaps 2-3 before, so 5-6 years old. (Fins bitten by the ever opportunistic and brazen pacu post mortem.) 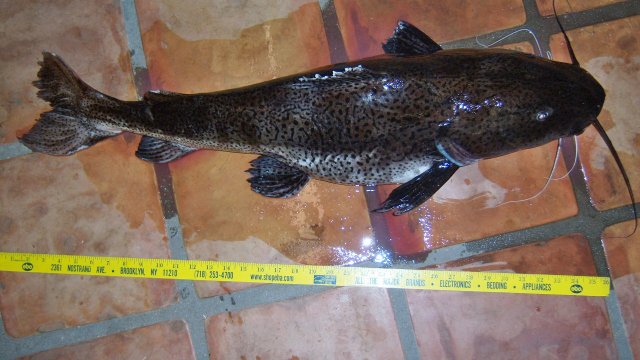 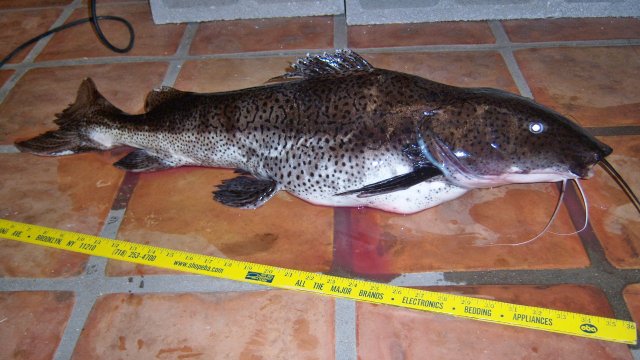 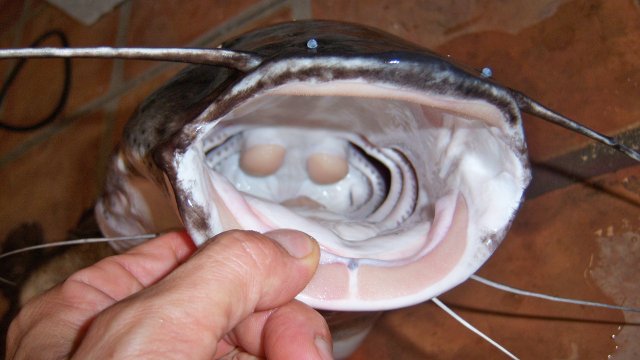 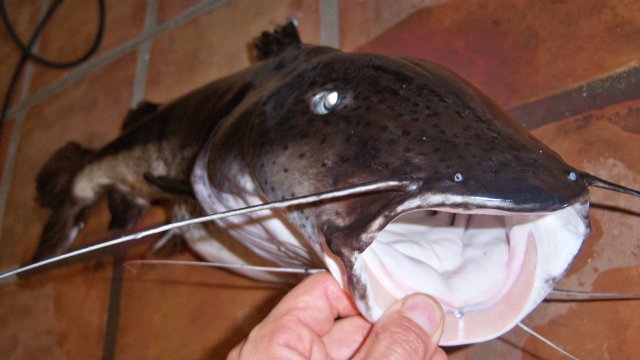