I've decided to start a thread around the progress of my 850 gallon. The tank itself is 11' long by 4' wide by 2.5' tall. I found the tank on a local classifieds ad site and have been told it was originally purchased from Acrylic Tank Manufacturing. Now the tank itself may not be DIY, but every single other aspect about the setup is. 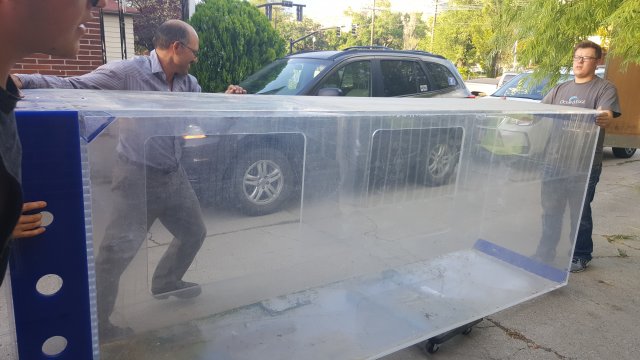 Picking up the tank. 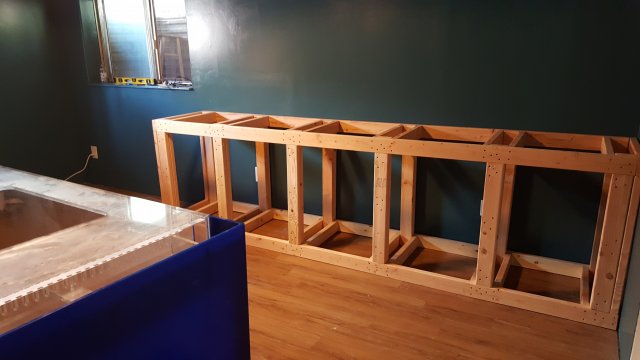 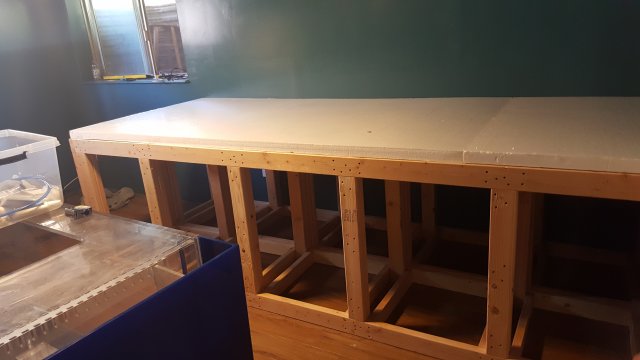 Building the stand. I specifically built the stand into two separate pieces so that it can fit through door frames if/when I ever need to move it. 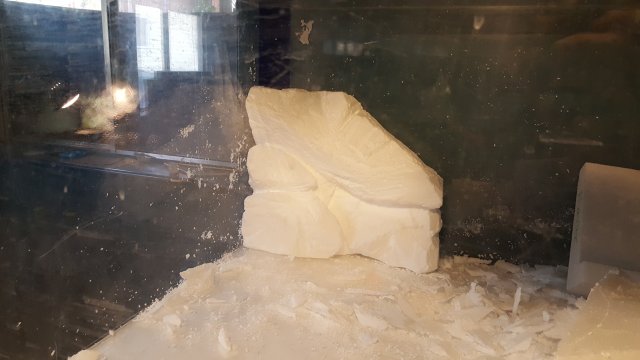 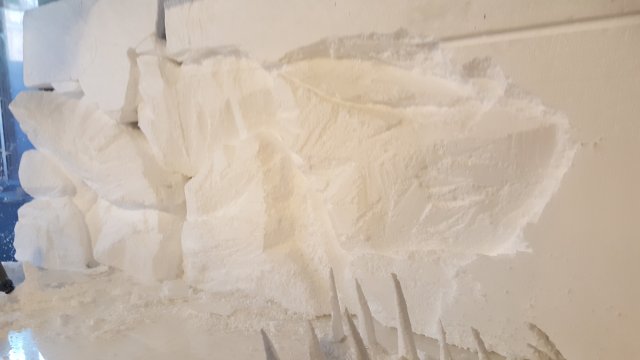 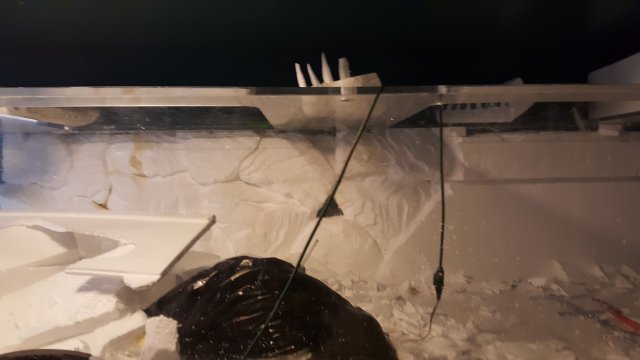 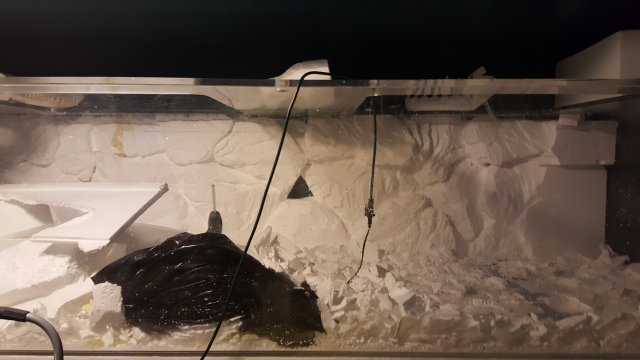 Carving out the background. I used polystyrene, hot glue, and a kitchen knife for this process I'm really happy with how it turned out! 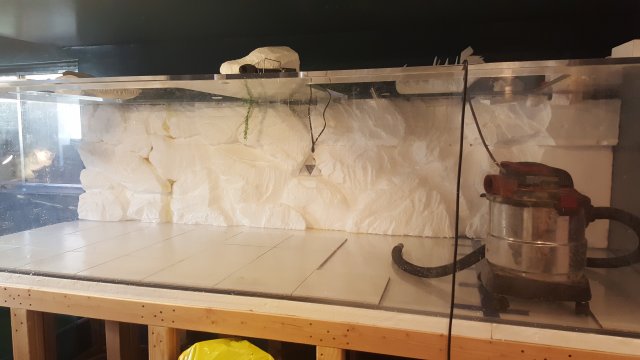 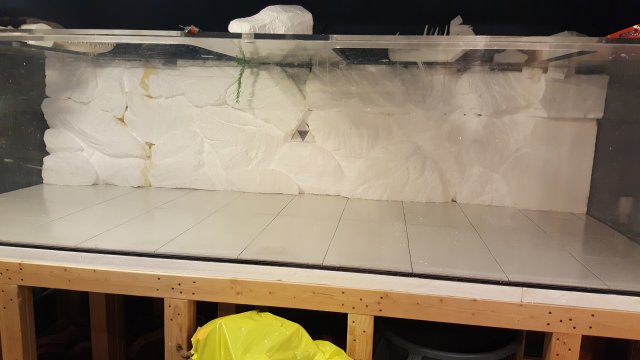 Installing white tile for the substrate. I went with white because I'll be playing around with a lot of RGB Led lights inside and around the tank which will really glow off from the tile. I chose tile simply because cleaning 44 square feet of sand sounds like a TERRIBLE idea and bare bottom is too bland for my taste. Also yes, there is a Triforce in the middle there. I may as well combine my two biggest passions with this dream project I'm looking forward to seeing it light up! It's going to be between a dragon I'm sculpting and an alligator skeleton (you can see it up on the top there). They'll kinda be fighting over it or something lol. 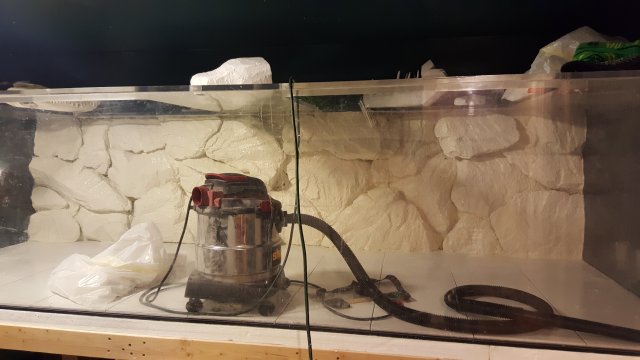 Here's where I am presently. I've finished the first coat of unsanded tile grout for the background. I'll be applying two more coats of the grout over the week and then paint with acrylics. After the painting is done I'll apply a final layer of clear Pond Shield epoxy as a finishing touch. The colors I'll be going for are similar to the A9 background produced by AquaDecor. I'd post a link but I don't have the privilege yet!

Now let's address the elephant in the room. FILTRATION! I have an overflow on the right side of the tank with two outflows and two returns. I will be creating a sort of DIY sump with 6, 40ish gallon brute waste bins. The two outflows will run down and under the stand to spill into their own respective bins. Each of those bins will have bulkheads near the bottom connecting them to another set of bins on the right. These two bins will act as submerged filtration, with the first mainly focusing on mechanical filtration. Then the second set of bins will have bulkheads at the top into the last set of bins. These last bins will be massive trickle towers which will lead down to a final pair of bulkheads plumbed to my water pumps which will return the water back to the tank. I'd draw a diagram but I'm feeling awfully lazy at the moment I'll also probably attach another set to the left of the first bins at the very top just in case of an overflow/power outage/drain. I could use a more traditional sump method but as you remember the stand is two separate pieces and honestly I think this method will be a lot more effective. Let me know what you guys think!
Expand signature
-Legalize the Asian Arowana-

Looking really good! Love the shop vac in the tank!!

Haha thanks! As you could probably tell the polystyrene makes a HUGE mess
Expand signature
-Legalize the Asian Arowana-

nice pick up and dimensions! cant wait to see it finished! especially the background~

tomojsg said:
nice pick up and dimensions! cant wait to see it finished! especially the background~

dang i regret buying the big 2.5hp shop vac now seeing how portable the smaller ones are and how useful they can be lol... gotta go get me a smaller one now lol haha.
Click to expand...

Thanks! I'm also eagerly awaiting the finished product lol. As with the shop vacs, I definitely agree on the luxury of mobility. It just fills up relatively fast
Expand signature
-Legalize the Asian Arowana-

Abyssalisk said:
Thanks! I'm also eagerly awaiting the finished product lol. As with the shop vacs, I definitely agree on the luxury of mobility. It just fills up relatively fast
Click to expand...

Definitely! I couldn't believe it when I found the listing. I'd been saving up for an 8' x 4' x 2.5' tank from Custom Aquariums but this tank showed up being 3' longer, acrylic, and half the price!
Expand signature
-Legalize the Asian Arowana-

11 feet long? Not sure I have ever seen a tank that size before!

Anyways, great build, can't wait to see the progression of it
Reactions: GamerChick5567

Oompa Loompa said:
11 feet long? Not sure I have ever seen a tank that size before!

Anyways, great build, can't wait to see the progression of it
Click to expand...

Haha yeah it's crazy to see in person. I'm still trying to get used to it myself!
Thanks, hopefully it won't be too long until it's finished
Expand signature
-Legalize the Asian Arowana-