HEADSTANDERS are a loosely related group of South American ‘characins’, in two families (ANOSTOMIDAE and CHILODONTIDAE). Their name comes from the habit of frequently standing in near vertical position, and performing antics while feeding (sometimes upside down), hiding, or otherwise just chilling with their head generally pointing down. Among the Anostomidae, Anostomus (2 spp.), and Abramites (1 sp.) are often seen; among the Chilodontidae, only one species of Chilodus is seen with any frequency.
Anostomids are shoaling fish occurring in groups. In aquaria they usually don’t share well with others of their kin, and may kill conspecifics unless in large groups and in large tanks. This unfortunately is hard to offer in most home aquaria. Although very interesting fish, they are often regarded as big time JERKS, who can annoy others (larger or smaller), by picking on, biting or just harassing others with their inquisitiveness.

Below some pictures of the Stripped Headstander, Anostomus anostomus. I love this species and I purchased 3, lost one, and then gave one away, some 3 years ago. With the single fish left, I have taken on the challenge of finding aquarium fish he cannot harass too much. For the last few months he is in a 75gal with a group of bosemanni rainbows, born and growing-out in that tank. Being so many (38 fish) each at ~2 inches, all fast and ever moving, this has the jerk completely neutralized, and this became an excellent arrangement where everybody is thriving. Of course, I have to thin out the rainbows as they are getting big. Anybody local and interested in getting some rainbows?
You have any headstanders? Have you been challenged by them or have developed means of keeping them successfully? Would you show your fish here?
PHOTOS- various shots of single fish at various times; with the rainbows. 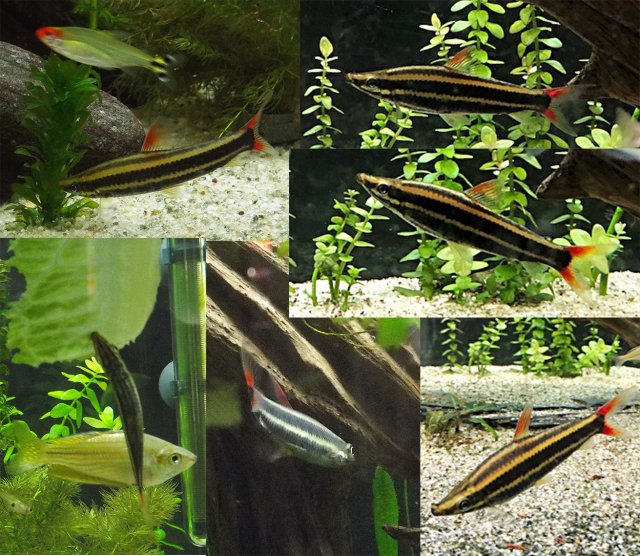 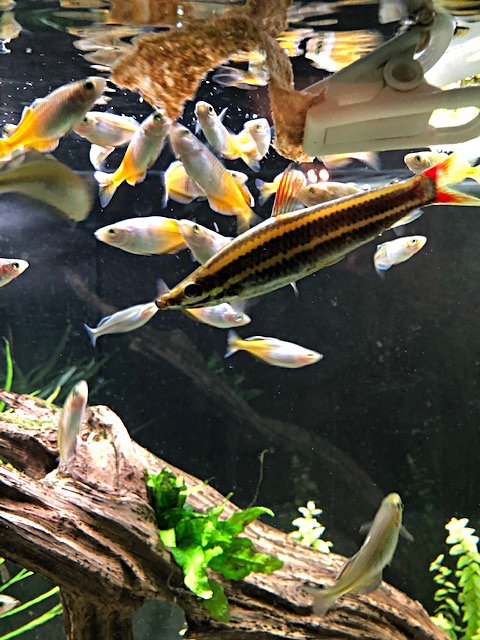 Only ever kept one species: the banded leporinus
I used to have 3 a long time ago with 3 red belly pacus, the leps killed for territory/sport and the pacu ate everything but a silver dollar, got rid of them when moving.
Almost 3 years ago now I got a new one, who will be the focus of this story Meet Treble (now named deadeye as you will see later), the fish from my profile pic.
Got him when he was only 2 inches and put him into a semi aggressive community tank. As he grew his kill record bedded up before. Usually sick and dying fish, but as he grew, anything near his size became a target for him to shred. 2 years ago I got a RBP, and got a tank for it and the leporinus. It went well for months where the leporinus was on top and chased the piranha around. Around when it hit 4-5 inches (lep was 7 in at that point), the piranha stopped taking the crap anymore. The tank was no mans land for a few months with neither having the upper hand but always fighting, lep took a lot of damage but always healed fast. Then September a year ago, Treble got the name “deadeye” after the piranha won a fight and bit it’s eye out. Amazingly the leporinus survived and outlived the piranha (who just kind of dropped dead one day) and now is the alpha in a group of sa/ca cichlids. Still mean though, responsible for multiple deaths in that tank and forced me to rehome my sev because of constant attacks. Lep is now an 8 inch beauty, with a beautiful side and a bada** looking side (one without the eye).
I’ve bored you enough with words though, here are some pictures: 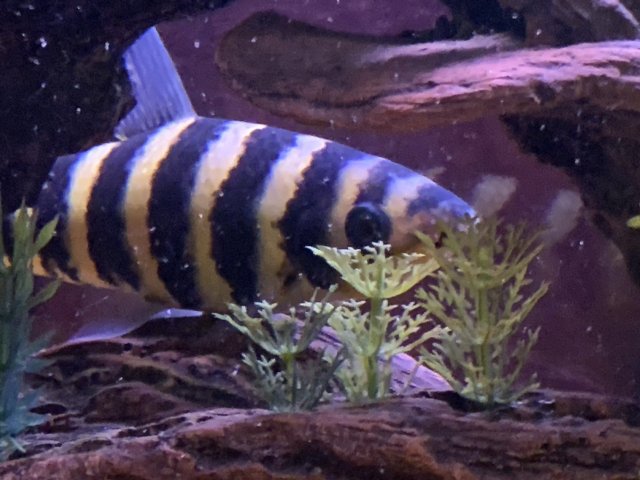 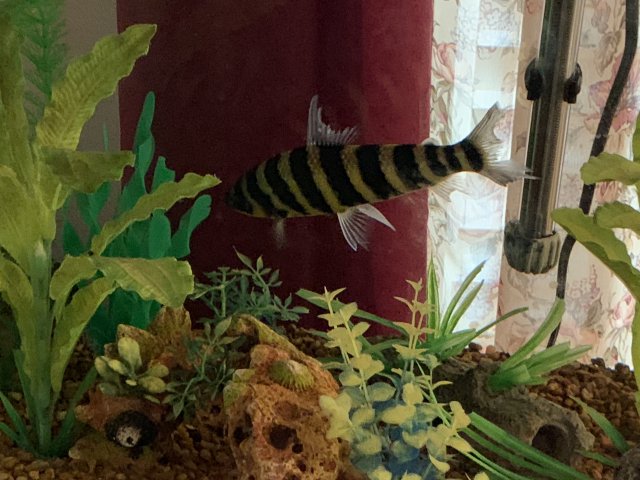 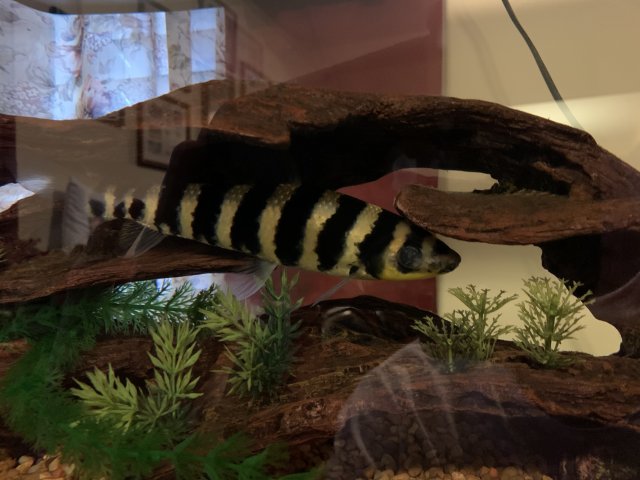 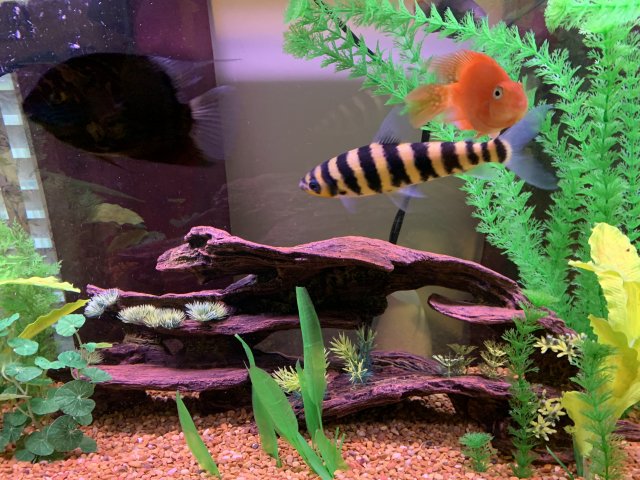 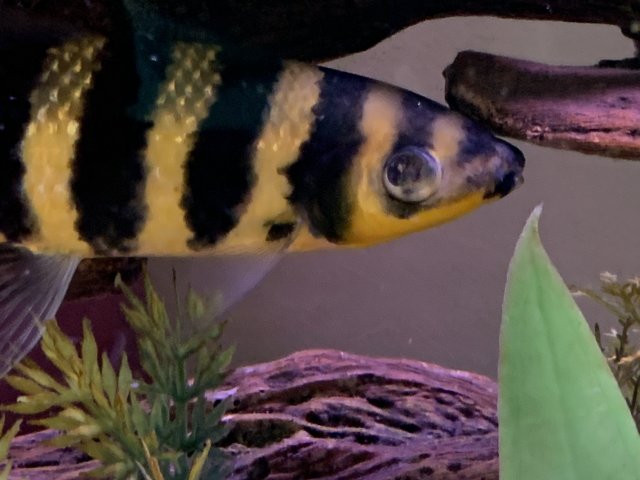 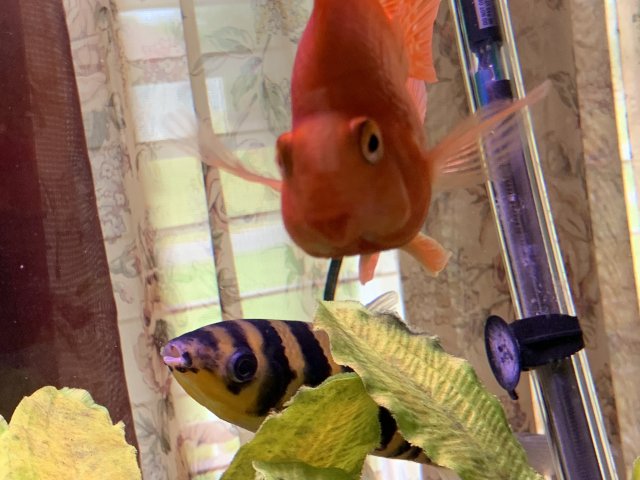 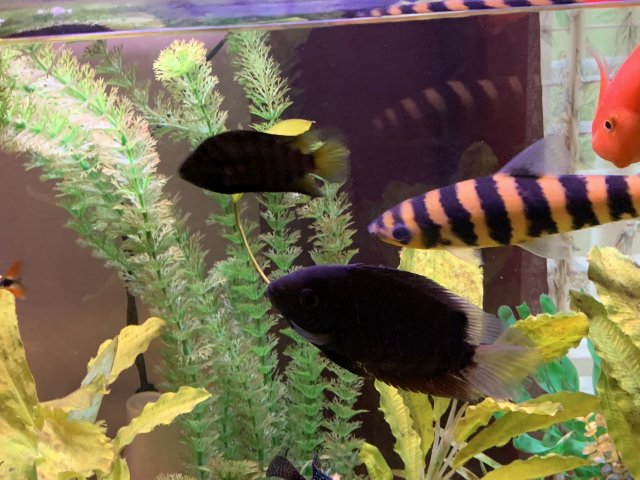 Nice fish and story! I am glad you have come to like your Leporinus, and thanks for posting pictures.
Yes, Leporinus spp. are very much part of this group (Anostomidae), even though they don't 'headstand' as much. But they are common, abundant, and very active schooling fish, and big time jerks they can be. I don't have any now, but I did own years ago one specimen of each of two species- the Many-banded Leporinus (L. affinis, or fasciatus?), and a Stripped Leporinus (L. arcus). Very nice, large fish, jerk-like but full of activity and personality.
Anybody wants to share images of Leporinus spp, or any headstanders? With the exception of 1-2 species of Leps. there are many more around that we just see very infrequently. Of interest is to enjoy them strategically (i.e., in manners that don't endanger your other fish).
Reactions: tlindsey

FJB said:
Nice fish and story! I am glad you have come to like your Leporinus, and thanks for posting pictures.
Click to expand...

Thanks! He’s always been one of my favorite fish, just a bit temperamental. I’ve always wanted to keep some of the other headstanders or leporinus species, they are just always too hard to find, too expensive, or easy meals for my current fish.
Expand signature
“There’s always a bigger fish.” - Liam Neeson, 1999

I personally have one of the smaller specie of Nannostomus Eques the Browntail Pencilfish. 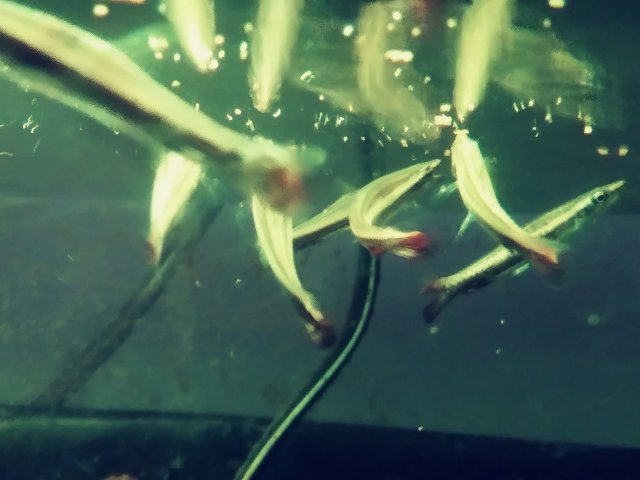 Very nice pencils!
I have never had N. eques, but I did use to have a group of N. beckfordi, years ago, as well as some Copella cf arnoldi (splash tetras).
Very interesting fish, in the related family Lebiasinidae. For some reason, all of those fish seem to have become less available, although perhaps that is my own impression and not generally the truth.
Thanks for showing your beautiful fish!
Reactions: tlindsey

FJB said:
Very nice pencils!
I have never had N. eques, but I did use to have a group of N. beckfordi, years ago, as well as some Copella cf arnoldi (splash tetras).
Very interesting fish, in the related family Lebiasinidae. For some reason, all of those fish seem to have become less available, although perhaps that is my own impression and not generally the truth.
Thanks for showing your beautiful fish!
Click to expand...