1.1 update- minor format changes to improve readability after the migration, clarification of data in the guide and a new 'key to species' picture.

Here we go again! This is a subject that has been discussed ad nauseum on the internet with very little successful proper identification. There has been thread after thread of folks wondering why our dorados don't turn yellow, why their displayed head morphology varies so widely, etc, etc etc. These are fish that have have until recently confounded even scientists.

I would like to thank everyone who contributed images or information to this project via the ID sticky preparation thread. Your contributions have proven to be quite useful in the preparation of this thread.

I would like to specifically thank the following members-

DB Junkie, for sharing his wealth of knowledge on these fish. He's one of the few members who has managed to keep these fish in a group and a community without a lot of other dead fish.

And finally a man who has played an immense role in bringing rare fish into the hobby, Mr. Rare Fish himself, fugupuff. Wes, thank you for everything you've done over the years to help the hobby.​
Expand signature
Never Trust a Catfish ​

Dorados can be a very challenging fish to keep successfully in an aquarium. They are large, dynamic, active predators who are capable of a stunning turn of speed. Dorados can also be quite difficult to get to successfully live in a community, though it is not impossible.

In the wild, dorados favor warm, well oxygenated, fast flowing rivers and areas of large, open rivers and lakes. In order to properly care for these fish, it is important to closely replicate the conditions that this fish favor in the wild. Should one fail to do so, it is entirely possible that you could have a very expensive dead fish on your hands. As we all well know, conventional wisdom is that an environment in which most aquarium fish can thrive requires no more flow and aeration than that which is provided by the tank's filters and possibly a bubbler. Unfortunately, this is simply not the case with dorados.

In order to provide your dorado the conditions it needs to thrive, you need powerheads, a bubbler, a bubble stick and a very big tank. Dorados need conditions very similar to an African tiger fish to thrive, though they don't seem to be quite as sensitive to their environment. An ideal setup would involve violent current with several areas that are calm. You will find that the fish often seeks out eddies at the edge of the highest flow when it is not parked in front of a powerhead swimming energetically to exercise.​

The arrangement of the powerheads in my 150gallon growout.​

Having a high level of current creates violent flow that does several things for your fish. First, it simulates the natural areas of strong current that these fish favor in the wild. As such, it helps your baby dorado to feel more secure. Further, the extremely strong current, if arranged in the tank properly, will simulate "riffles". Riffles are used in the wild as cover by riverine fish such as dorados. A happy, content dorado is quite content to spend all day parked in front of a powerhead and the can be surprisingly inactive. To keep an adult specimen of dorado, I feel that the minimum footprints are as listed below. Remember, these sizes are for a tank configured as described specifically for the needs of the fish. If you are trying to mix your dorado with other fish that have more conventional needs, you will need a MUCH larger tank. Regardless of if you're specializing your tank to the needs of the dorado or trying to mix him with something else, bigger is always better!


S. brasiliensis- 8x4
S. franciscanus- 8x4
S. affinis- 8x3
S. hilarii- 8x2
​
S. brasiliensis is the generally largest member of the genus, though exceptional franciscanus specimens often exceed the largest brasiliensis. Salminus brasiliensis is very rare in the hobby. Only a very few have been brought in and purchased by some very lucky people. These fish are commonly caught at or under two feet in the wild, with rare specimens approaching three feet and 40 pounds happening in the wild. It is not known for sure how large they will get in aquaria, but it is safe to assume that they will only rarely exceed two feet and if they do, it will take a very long time.

Feeding a dorado isn't an overy complicated process. These fish are very aggressive feeders who will normally readily take live, fillets, market shrimp or pellets. In the wild, a golden dorado of less than eight inches will have a mixed diet, feeding on both small fishes as well as crustaceans and insects, seeds and other detritus from the surface. As such, if you wish to have your young dorado eat pellets, it makes sense to use the young fish's natural inclination to feed from the surface to your advantage. Waiting until the fish is larger to pellet train could end up making your life quite a bit more difficult.

In order to get your new dorado eating non-live food, it is quite possible to use either the fishing method or the teacher fish method. Extreme caution should be exercised when using the teacher fish method as dorados are renowned for their aggression and are quite capable of killing fish that are even larger than they are.​

In a dorado tank, minimal furniture is ideal. Dorados are fast, powerful open water fish who are capable of incredible speeds. If there is too much in their tank, they are quite capable of damaging themselves on the decorations in the tank. Very little can compare to the sight of a large, healthy dorado patrolling his tank. It would be an injustice to your fish to crowd it with too much furniture. If you choose to decorate your sufficiently large dorado tank, a low profile 3D background and a river stone substrate would be attractive without the risk of causing undue harm to the fish. Large pointy driftwood and similar items upon which the fish could be impaled are strongly discouraged. Dorados are also capable of a sufficient turn of speed in order to be killed by running into the glass. Should they spook and run into a pointy piece of driftwood, the results could be catastrophic.​

Compatibility with a dorado is a troublesome subject. They are renowned in the aquarium community for their ferocity, and for every species that someone reports as having been kept successfully with their dorado, it is possible to find someone else who says that their dorado killed that same species. That being said, it is possible to have your dorado get along with its tank mates. The trick appears to be having an established tank full of large, healthy fish that are indifferent to the dorado's attentions. A fish that will react to the dorado's aggression, such as an African tiger fish, will only exacerbate the problem. Large calm fish will cause the dorados to fall in on them and school calmly. In the wild, young golden dorados will often form mixed schools with specimens of Brycon whitei . DB Junkie reports his dorados schooling well with his Brycons.​
Expand signature
Never Trust a Catfish ​
Reactions: Killduv


Click on species name to go to that profile for further details on that species.​
Valid Taxa 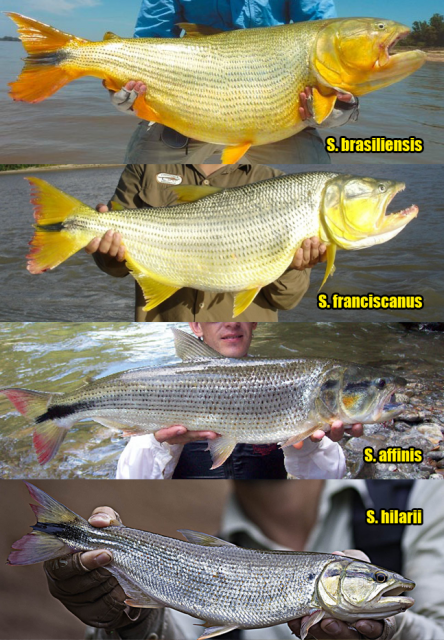 Salminus franciscanus is by far and away the most common dorado in the hobby. These fish are farmed in Brazil in order to be stocked as commercial game fish and their availability is a direct result of this.​
Distribution

Salminus franciscanus are relatively slow growing fish. Growth rates of less than an inch per month are common. Most franciscanus golden dorados will stay under two feen in length with only exceptional specimens exceeding two feet in aquaria. The world record franciscanus was caught in 2008 on the Rio Sambura in Brazil and was a shocking 85 pounds, two ounces.​

Salminus brasiliensis is world famous as THE golden dorado. This is the fish that everyone thinks of when they imagine a dorado and is the one that is most desired in the hobby. This species is, however, quite rare in the hobby thanks to the large numbers of Salminus franciscanus that are imported thanks to the farm industry that exists around that species. Very little is known about these in the hobby due to the rarity with which they show up. If you should be lucky enough to find yourself with a brasiliensis, you are very lucky indeed.​
Distribution 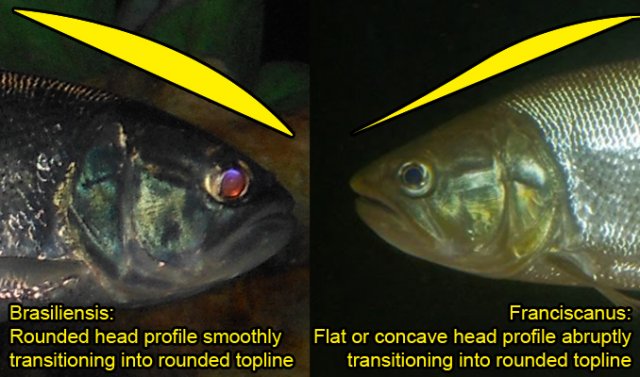 The few available reports indicate that this fish can be expected to grow at about an inch a month. Aquarium specimens over two feet are unknown to the author. In the wild, these fish can get quite large, the world record specimen was 67 pounds, eleven ounces and was caught in 1999.

Salminus affinis, the silver dorado, is a localized species of dorado from Ecuadorian rivers. This fish is almost unknown in the hobby. They do not achieve the same massive size as the golden dorados.​
Distribution

In aquaria this species will likely not exceed eighteen inches. The world record fish was caught in 2009 by Alejandro Linares and was eleven pounds, zero ounces.​ 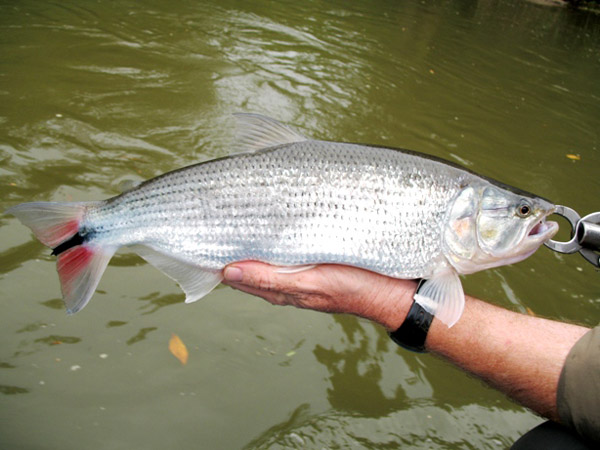 Salminus hilarii, the white dorado, is a Brazilian species of dorado that is very rare in the hobby. All specimens of this hilarii that are brought into the hobby are wild caught fish. This species is rarely imported due to the easy availability of S. franciscanus from it's being farmed for sport fishing and the lack of desire for this relatively unknown species.​
Distribution

-Similar in color to S. affinis.
-Though can have a red or purple tail, sometimes white
-Most easily distinguished from S. affinis by the presence of a caudal fin extension (point, which is absent in S. affinis.​
Academic Diagnostic Traits

Should not exceed eighteen inches in aquaria. World record information for this species is not recorded.​
Expand signature
Never Trust a Catfish ​


Roberts, T. 1969. Osteology and relationships of the characoid fishes, particularly the genera Hepsetus, Salminus, Hoplias, Ctenolucius, and Acestrorhynchus. Proceedings of the California Academy of Sciences, 36(15): 391-500

Fantastic thread Rob. I have been very tempted in the past, but it may be time to take the plunge!
A

Thanks for putting together this thread.

This is a fish that needs a big tank and a bit of planning. I have noticed several people on this site and a few hobbyists in Singapore that have kept dorados with other fish however my approx. 22inch/56 cm psycho has proven a killer of almost anything it wants to just as you suggested. It is in with many other fish but I also have found brycons to be some of the most suitable tankmates.

I find that my dorado has caused so much trouble in my 15kg/56kl that I might have to move it to a smaller tank in a few of weeks when I am emptying the 15kg/56kl to do some routine maintenance.