Ok, so I just barley started keeping more naturalistic tanks, trading out all the red, blue and green gravel I have had for years for tans, whites, browns, and blacks. And so far I like the improvement. But after seeing all the amazing aquascapes that look so appealing and overall more pleasing to the eye. The first challenge is most aquascapes are an attempt to control all the details, but that is not going to happen with cichlids. They move sand or gravel or whatever they want wherever they want, you can try to predict their moves, which to an extent I can after watching how my red zebras move stuff around over the last 5 years. So the tank I am thinking about giving a beautiful aquascape is my 55 gal Vic tank (all male for now)
Current overveiw 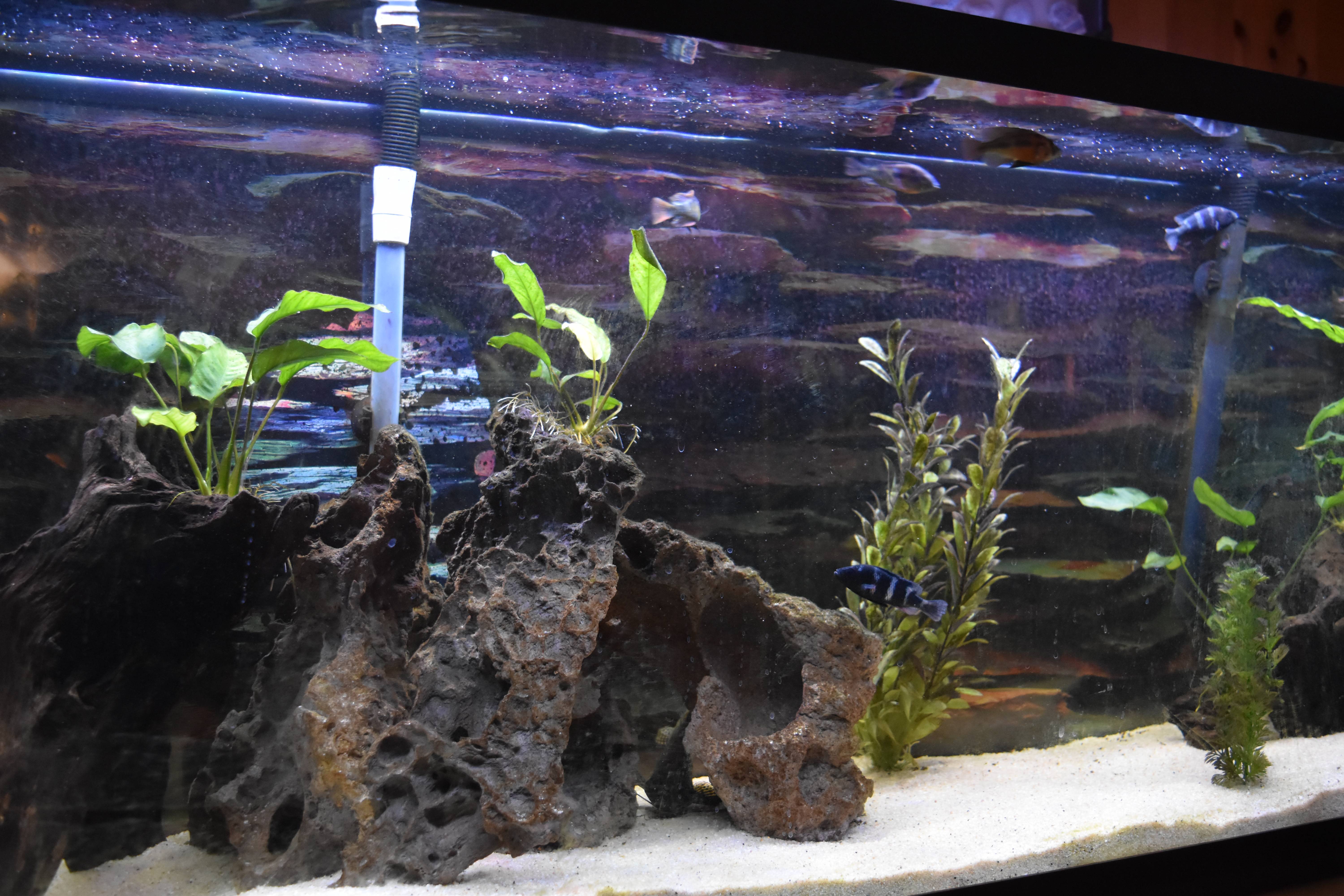 So as you can see I have some live anubias in the tank, as well as fake plants, I plan to phase those out over the next little bit. So unlike Mbuna and Tropheus which live in the rocky outcrops and are vegetarians which will destroy most plants, the vics I keep are carnivores, planktivores, and macrophytes eaters (this is where my biggest concerns come from, as they do eat plant matter for the bacteria)
Currently
1 Sp #44
1 P. macrocephala
2 Xystichromis phytophagus
2 Astatotilapia latifasciata
2 Synodontis (not sure if they are both Synodontis eupterus)
this scheme is likely to change as I plan to eventually add some P. nyererei and a starry night spiny eel, or make it a tank with just the riverine/wetland species so the Xmas Fulu and Zebra Obliquidens (which are my two favorites in the tank right now), the cats, and an eel. 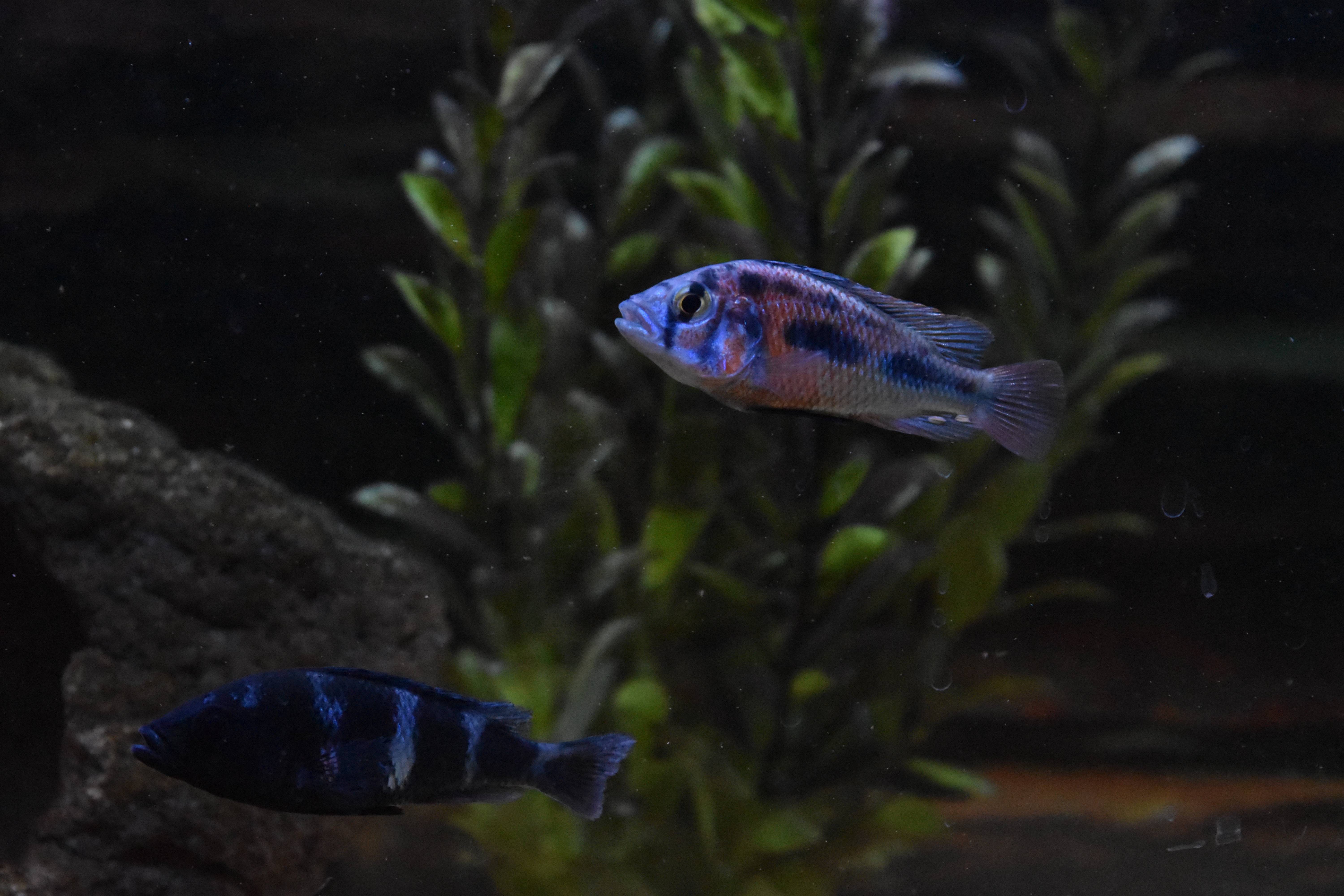 Both these species are found in densely foliated areas, A. latifasciata is found in lake Kyoga among plants, and X. phytophagus live in the roots of papyrus. So I really would like to go psedo-dutch with the tank, obviously I have lots of Hardscape, maybe spread it out better eventually. Reading the Plants 101 and 102 on this forum have been my major source of information. So I do have Java Moss, Java Ferns, and Vals to think about adding. Everything besides plants on rocks and wood will be potted. I would like to know about some more relatively undemanding hard water plants. So some of the others I really want is water lilies, I had one in my 20 gallon at one point and I really liked that thing, it was a dwarf variety. I would almost like one of the larger ones though. There are even some from the Nile. But in doing some research it seemed like they soften the water, or at least suck out all the nitrates and phosphates.
I have a few more specific questions about Dutch. Clearly I am not/cannot follow the exact rules. I am using plenty of hardscape. But when it comes to plant placement what are the rules. As far as I can tell, you group plants buy type, and keep them all in separate groups. Anyway I would like some input, or experiences with plants and cichlids.
Expand signature
My Youtube

I am trying to do the same to start my first cichlid planted tank. I got bored with rockscape, and want to incorporate lush green into the aquascape. I am going to auctions coming up in spring, and load up with plants to try it out.

Years ago I grew some java fern attached to drift wood, but they eventually infested with black beard algae and I had to toss them out. I had Mbuna (yellow lab) that were supposed to eat plants and graze algae, but they did neither. So I wouldn't worry about Mbuna or Tropheus because captive vegetarian got lazy and prefer fish food to green.

I know enough about cichlid, but know next to nothing about planted tank. I am planning to grow non substrate plants such as anubias, java and African fern, or perhaps a couple tough plants such as vals, crypst or amazon sword in pots. Based on my research, Java moss and grass cover won't work because they are too delicate to withstand abuse by cichlid, and tend to trap detritus. I'll leave the substrate for cichlid to dig.

Here are a few videos of planted tanks at the Amazon exhibit in the National Zoo I took. The plants I saw are predominantly low light anubias and java fern on drift wood and rock, no moss or ground cover, hardly any substrate plants, and no CO2 injection I am aware of. Although the fish are not cichlid, the set ups are practical and inspirational for a cichlid planted tank.

I have had some luck with Anubias, java fern, vallisneria, and onion plants. With very small, or strictly carnivourous species, you might get away with some nymphoides types, or water lettuce. Most floating plants are quickly consumed, but all my vics leave the water lettuce alone unless they get really hungry. In my experience, if you want to put something more then anubias or java fern, you should have a lot of plants, and few, well fed fish.

I've kept and bred something like 30 species of victorians, including phytophagus and latifasciata, and they all consume plants in captivity if they get hungry enough. Vic's are very adaptive. Even piscivores will eat plants that are native to Lake Victoria, ironically. On the bright side, if you have a heavily planted vic tank, you can leave town for a few days and not worry about your fishing starving. Just don't count on having plants when you come home.
You must log in or register to reply here.
Share:
Facebook Twitter Reddit Pinterest Tumblr WhatsApp Email Link
Top Bottom