I lucked out and when the local hardware store closed I bought a bunch of big, medium and small unions, elbows, etc at discount prices up to 90% off. I got big fittings just for fish caves and imaginary filters I hadn't designed yet. I have boxes of stuff worth $500 that I paid about $200 for. I ordered a DC pump today from Chewey and lots of salt.

Now we're waiting on the weather. Next week is supposed todry out and I have a guy coming and a dumpster delivery. WooHoo Buddy! This job has been years in the making, because it had to wait for a major remodel of the house. This is the 17th year we've done real work o this house, and the big SW aquarium will be the cherry on top! 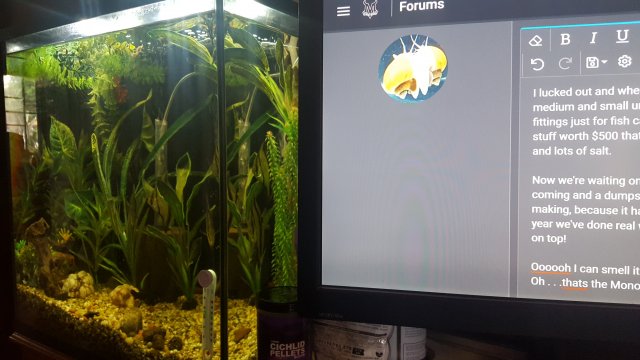 Well the saltwater tank was delayed by freshwater falling from the sky repeatedly.

This delayed our re-roofing by weeks, including the repair of dry rot and Termite eaten Lumber.

In the meantime I have come to realize that we really want the African tank in the living room, and the fish in it really need the extra water.

My Africans are in a 55 set up with a 20 gallon sump and I am going to put the Mona sebae there, in my office, for the nonce. 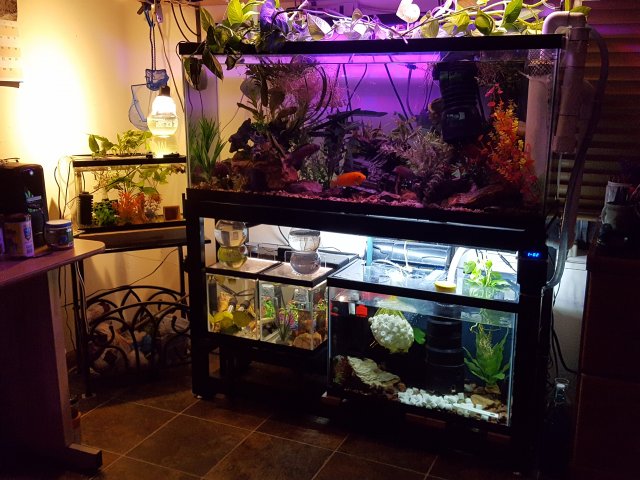 Eventually I will have to move them to a larger tank, but they will have to hold out there for 6 months.
I hear bubbles 24/7

The Monos will finally move up to a bigger system tomorrow. I've been promising them for 6 months now and they are ready.

As are the black mollies and the guppies.

Thank heaven I finally ran out of Tetramin and started feeding them OmegaOne cichlid flakes. The guppies have never been this pretty.
I hear bubbles 24/7

This is the new system for the Mono sebae and it holds about 50g + 10 in the sump. 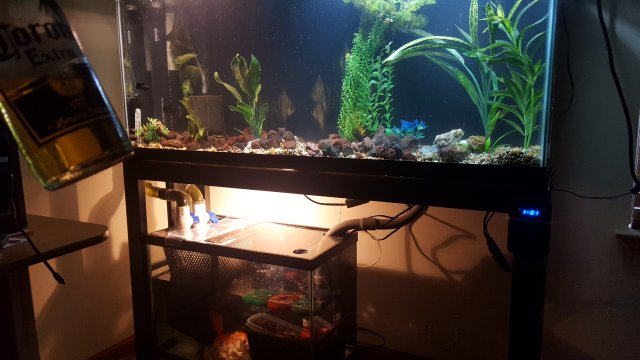 The Echo dc 4000/litre/hr pump needed a little fiddling because of a slight casting flaw but now it performed flawlessly and I rarely run it above Speed 2 of 20.

I still have four mollies producing fry like crazy and three Guppies who are not because they are all males. The fry are getting eaten almost immediately, but this one managed to escape, and I rescued her to a 5 gallon tank of her own. 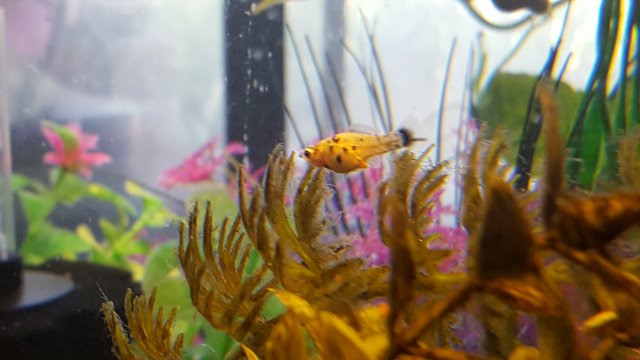 Her true colors are black and white but she is under some yellow LEDs.

Here is a future monster fish. 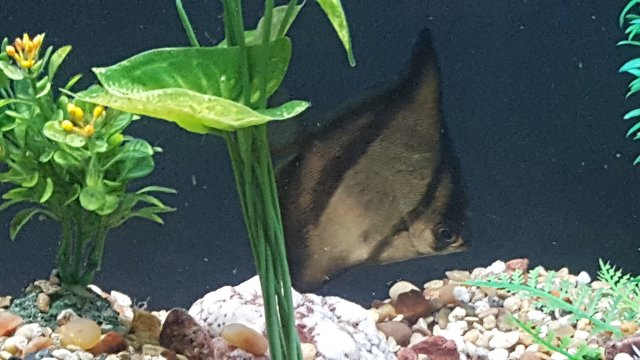 My first mono, Motumbo, is now 7 in tall.
He just ate and is hiding out and this fish is only about 6 in tall. The others are all between 5 and 6 in tall now.

They will possibly get twice this tall and long, but not in this tank. The mollies and Guppies will end up ruling this tank (with some other brackish cousin's when I find them) but the monos should go to 100% saltwater and a much larger volume of it.

Mollies are tiny pigs but monos are enormous pigs, and they will require at least a 55 gallon as a sump. I had initially plan to put them in the living room in a 125 but my wife didn't like the idea. That became my African tank.

I may also just sell the monos when they get larger, because my wife doesn't have much interest in them. 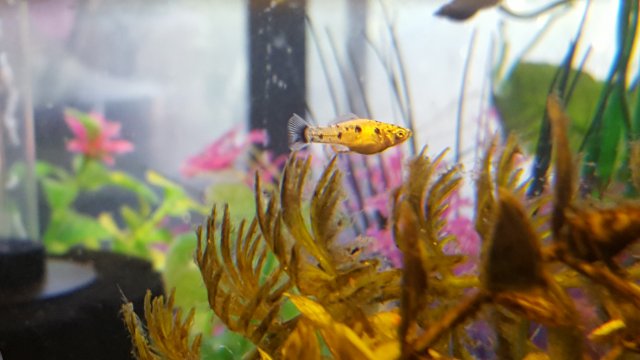 I discovered 6 tiny fry in my brackish nursery tank . I think they were hiding in some algae encrusted plants that I took from the 55 and put in for the new molly to nibble on.

I did not discover them until Saturday, when I bought a pair of small female mollies, and put them in the new tank. The 3 mollies pooped up the 5g tank fast, and while siphoning I found 3 fry hiding under the sponge filter. I found 3 more slight larger ones, swimming just above it.

That means 9 new mollies, if they all survive.

Zed the betta lives in the back 5G and he is always hanging out in his bubble. 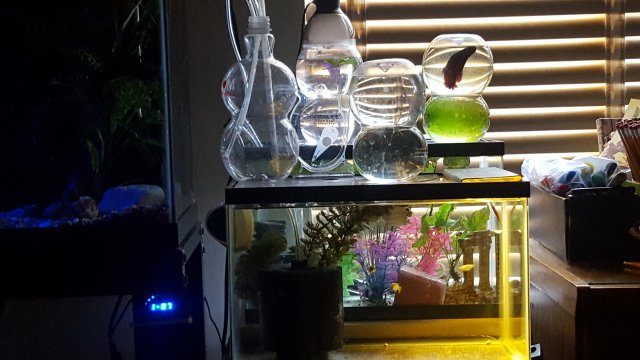 The 9 mollies all live in the front 5 G and never go up in the bubbles.
I hear bubbles 24/7

I have installed a new custom-made sump for he Monos, and it's over twice as large.
(compare to the Aug 1 pic above . . .) This came from Visio and was $210 +tax, delivered to the LFS. 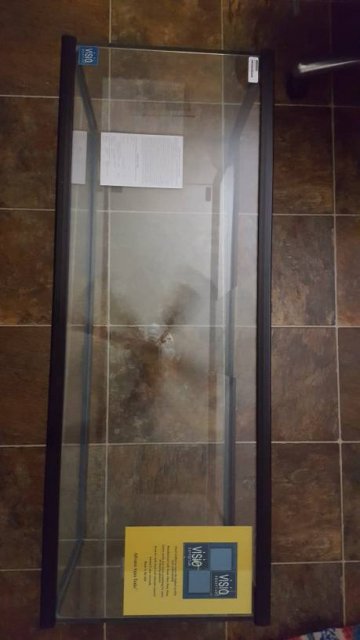 I had to make a platform for it, as it's wider than the metal stand by 2.5"
I wanted this anyway to help relieve the stand. 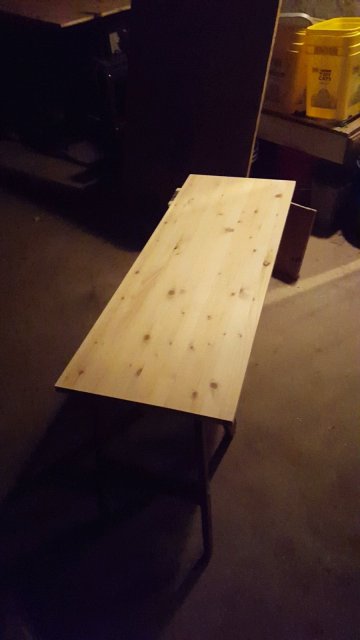 I used the old floss basket and two baskets of media, plus a layer of crushed oystershell, After it cycles in a bit I will move some fish into the sump, but first I need a pump screen to avoid chopping up fry in the pump. 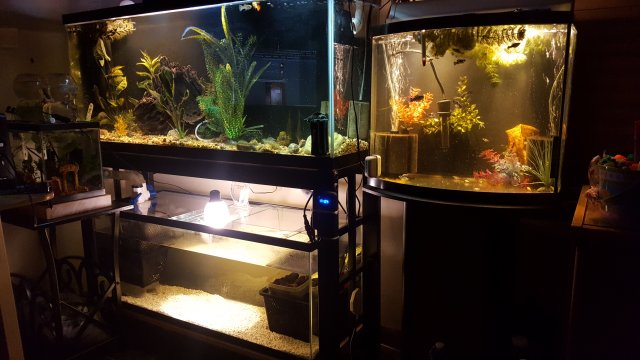 I hope you are using marine salt mix.

In my experience with Mono argenatus (its close relative) they tolerate rapid changes in salinity: straight from fresh to full marine without any issues. I have not tried that with sebaes, but I would assume the same applies.

Mbargas said:
I hope you are using marine salt mix.

In my experience with Mono argenatus (its close relative) they tolerate rapid changes in salinity: straight from fresh to full marine without any issues. I have not tried that with sebaes, but I would assume the same applies.
Click to expand...

Thanks, I use Instant Ocean but just with tap water and Mars DeChlor . I usually mix it about half strength, but the monos, guppies and mollies don't seem very particular. The Monos aren't breeding, but the mollies and guppies in the brackish system are doing great and I have a hundred fry now.

The brackish fry tank is also the new 42 g sump for the Monos. I filter the water going in and out. 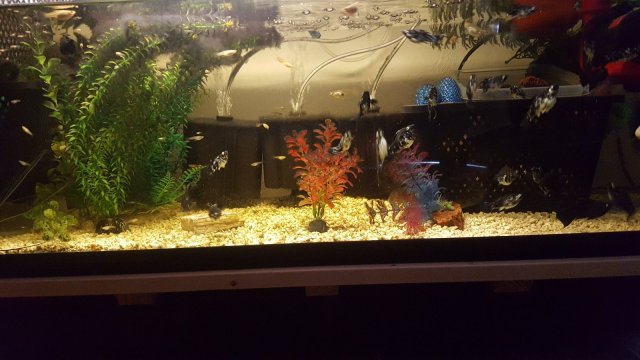 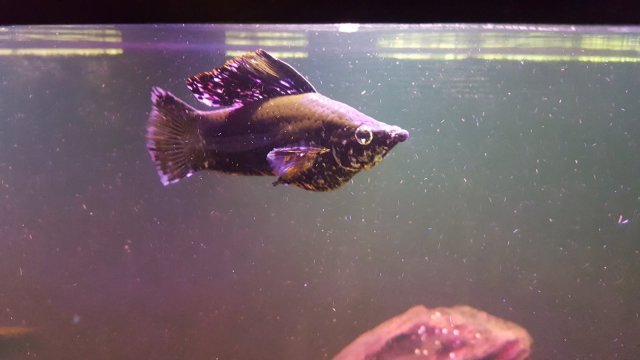 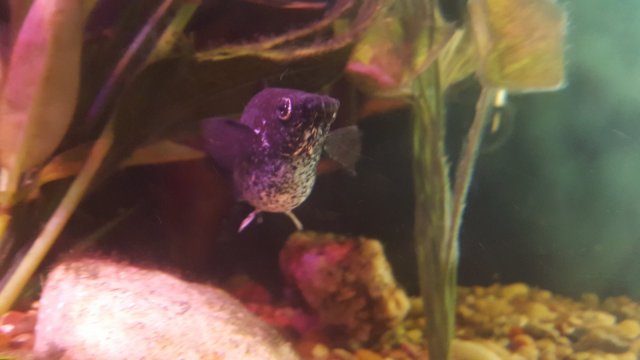 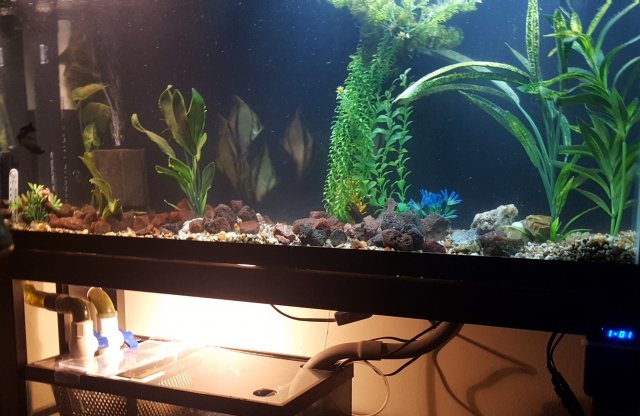 Now they are all over 7" 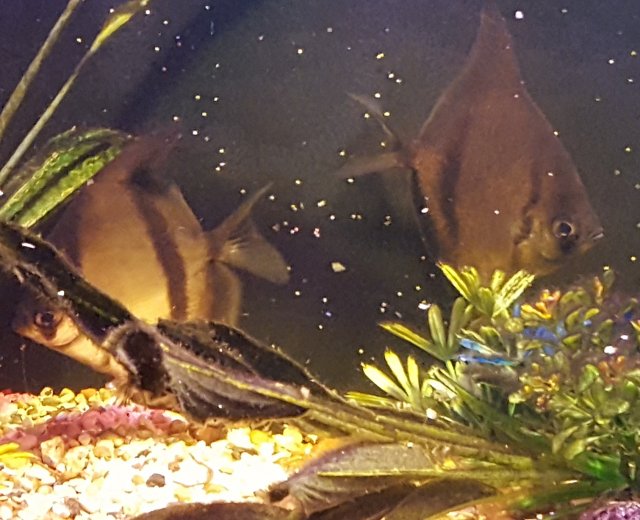 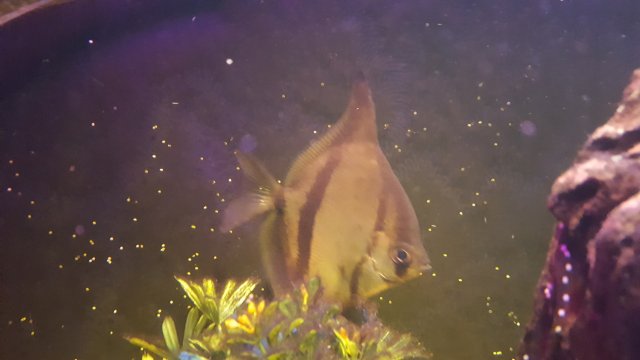 Unfortunately I don't have good Lighting on this tank right now and I can't get any decent photos. 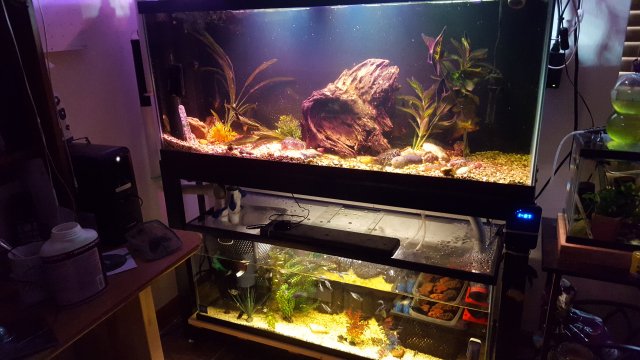 As soon as I go to snap this picture all the Monos hide..... Anyhow this is the whole system with 55 above and 42 below, and I'm pumping about 300 gallons per hour.
I hear bubbles 24/7
Reactions: islandguy11

Anyone who reads this thread front to back will find it rather disjointed for a few reasons.

There was a 20g sump, before the 42g sump, but the small sump in the post above was actually just 10g.

I changed my mind about which fish would end up where, but in the end I did not create a big SW tank at all.

I wound up with 8 empty tanks in the shed and 4 systems totaling ~400g.

Ulu said:
Thanks, I use Instant Ocean b. The Monos aren't breeding,
Click to expand...

I've known some individuals who just use rock salt for brackish tanks, which makes no sense, as if they didn't need all the other minerals.

I'm not surprised that the monos aren't breeding. They have been bred in captivity, but it is tricky. Apparently you have to simulate what happens to them in nature as they swim upstream, i.e. gradual change in salinity to stimulate spawning. At least that's the case with M argenatus.
Reactions: Ulu
You must log in or register to reply here.
Share:
Facebook Twitter Reddit Pinterest Tumblr WhatsApp Email Link
Top Bottom