for more pictures follow this thread, it will be my designated goliath vs vittatus and other tiger thread. Let us come to this subject with an open heart and mind, and accept different points of views. Everyone can put their tiger fish info., pictures, experiences here, maybe mods can clean it up just a bit too...this will be fun

Largest of the Characins, the African Tigerfish is big, powerful, and well armed, thus making it among the worlds most sought after gamefish. It lives in the open rivers and streams of central and northern Africa. The impression one gets from viewing these fish, is one of awe, terror, and mystery, not unlike the feeling of watching a Great White Shark.

This fish is basically an enlarged version of a Tetra. All of the fins are pointed, there is an adipose fin, the scales are large for a Characin, and the mouth and dentention are extremely well developed. The teeth are designed and look like knives. Each tooth fits in a socket between each tooth, allowing the teeth to mesh like cutting sheers. All teeth are seen all the time even when the mouth is completely shut. The entire body is sleek and designed for speed.

Horizontal unbroken black bands run along the entire body, hence the name Tigerfish. The rest of the body is usually a silver-white-grey, however there is usually a metallic orange or yellow sheen. Many specimens have various blue to green pigmented scales.

One of the most fearsome predators freshwater has ever known, the Tigerfish has a viscious reputation. These fish hunt in large packs, just as their South American counterparts, the Piranhas do. Prey consist primarily of other fish, but just about anything alive can fall prey to the Tigerfish. Like the Piranha, prey is eaten away bite by bite. Because they have razor sharp knife-like teeth, and extremely strong jaw muscles, they are among the few fish that can turn the tables on prey the same size or larger than themselves. There are unverified reports of attacks on humans.

This fish is probably entirely unsuitable for captivity because they are enormous, and require a huge body of water to support them. Nothing under 900 gallons is suitable. For tankmates, the only fish that won't be torn to pieces are other individuals of the same size. Aquarium furnishings would only be a hinderence.

Live foods are a must, particularly live fish. Once the tigerfish gets used to captivity it might except lean meat like beef heart. It is not advisable to stick your bare hands or other appendage into the tank containing this potentially dangerous or even deadly fish.

Keep the water extremely well-aerated and moving, with a neutral to alkaline pH at a temperature between 75 to 84 degrees F.

Breeding is rare in captivity. Only H. vittatus has been known to spawn in the aquarium. It is a smaller species, reaching three feet in length.

The importation of these fish must be considered rare and exceptional. If you somehow get a hold of one, you will have something special, a perfect machine devised by nature for one purpose.

The above was copied from Aquaria Central.

There seems to be at least four species of ATF.

These are truely specialized predators. They are extremely fast swimmers that need lots of space to safely maneuver. I know the above states min. 900g, but I don't believe that as being the rule. A 360g tank is sufficient to keep one Vittatus or other striped variety. For Goliath, I agree, 900g being min. Keep lids closed and weighted down as these are accomplished jumpers.

Growth rate is slow (6-9" per year). So if you have a 180g tank, and were to purchase a 3" specimen, you could get away with it for about a year, maybe a little bit more. Because these are normally very nervous and flighty fish in their juvenile to adolecence, at 1' they may start to bash themselves into the walls of a 2' wide tank. It helps if you black out the sides and back of the tank giving only one window to be able to view them. This gives the sense of increased security and therefore lessens spazzing. As they get larger and mature, they seem to settle down quite a bit. Avoid sharp rocks as they can easily injure themselves on them as they speed by. If you are planning to keep more than one, adding some obstructions such as driftwood may help against aggression by breaking up territory and providing cover. Plastic plants also work well. Providing clean, well areated water is a essential. Current is recommended especially as they get larger and require higher levels of oxygen.

As for temperament, they are aggressive predators, not all out brawlers. They are very quarrelsome amongst each other or anything that resembles them. As juveniles they don't seem to defend themselves very well against the true fighters such as aggressive cichlids, Jardinis, and even African Pike, etc... and often get bullied or killed by such. That timidness disappears as they get larger. It seems as though they know that they possess some real weapons. There have been many incidents where good sized ATF has severely lacerated or amputated the rear portion of a tankmate out of a territorial dispute or predation, so choose the tankmates carefully. Sometimes it may be best to wait until the ATF is at least 6-8" before introducing tankmates as many of the fish that would be compatible at a later time grow much quicker and would bully or make a meal of them. Good tankmates include the bichirs (bottom level preds which are also good for cleaning up scraps), larger Synodontis cats (Decorus, Angelicus, Granulosus), large barbs (good dithers ), med to large semi aggressive cichlids (Frontosas, larger Haps Oscars, etc...), Red Hook Silver Dollars, etc...

For food, aside from live fish, they will accept most meaty items (shrimp, smelt, catfish filets, beefheart, etc...).

In conclusion, they are awesome, but not for everyone with a large tank. To be truely successful with ATFs, the tank has to be tailored to them. Its one thing to have a large ATF, its quite another to have a flawless, mint looking large one. 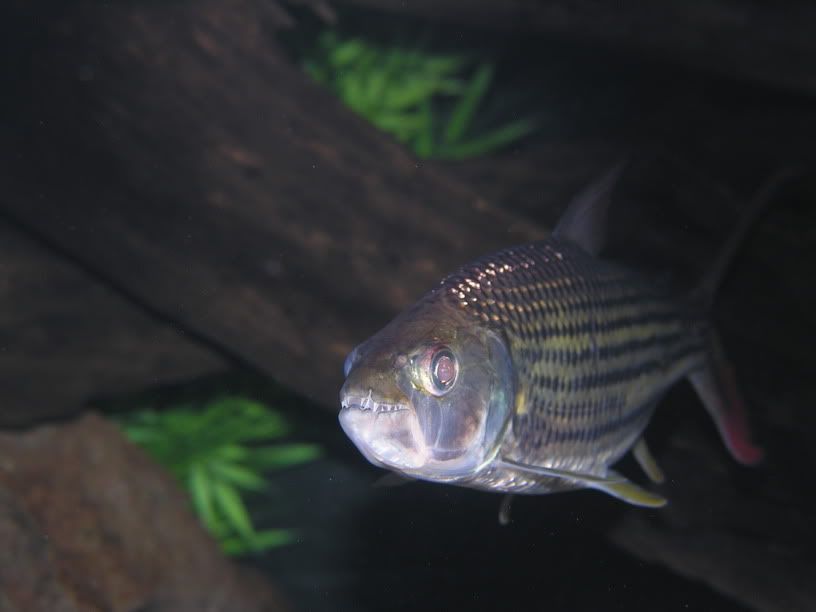 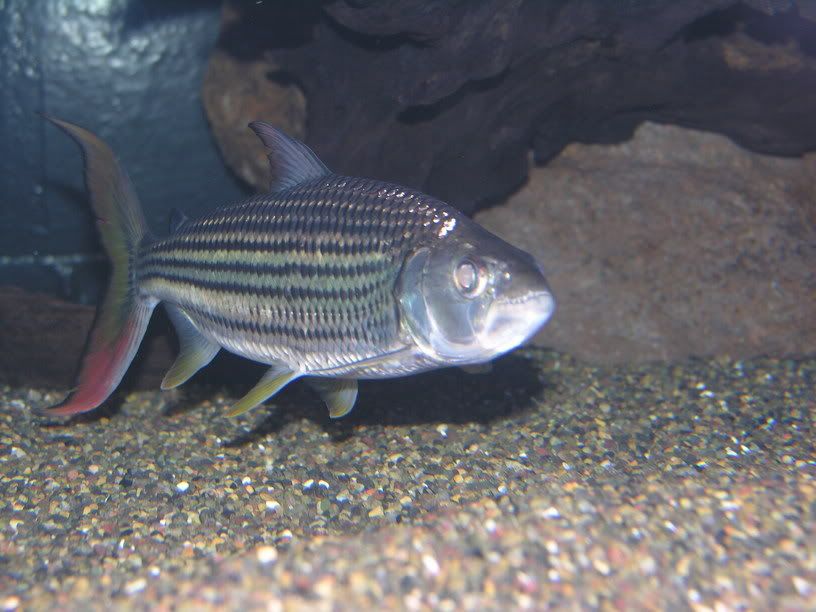 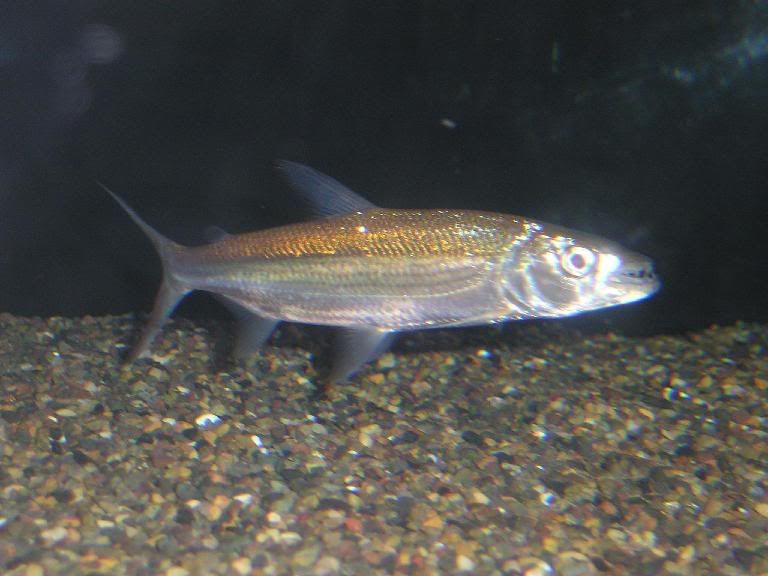 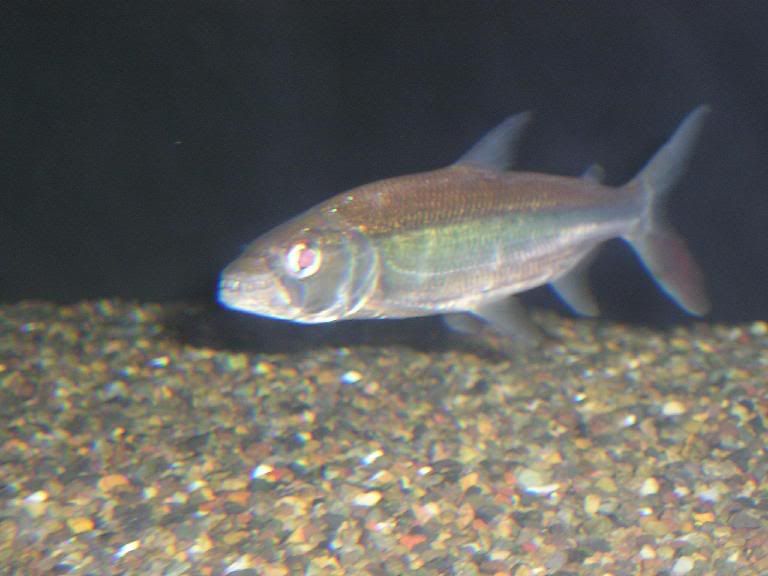 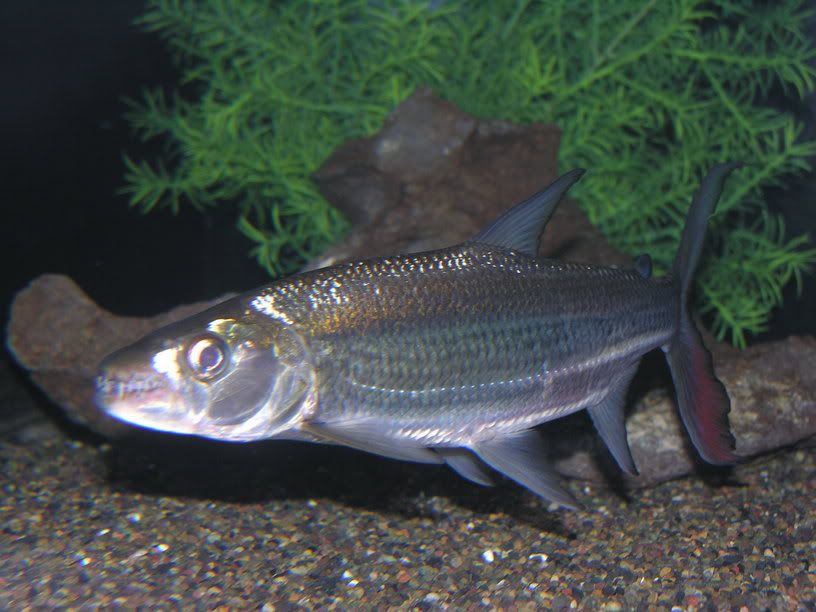 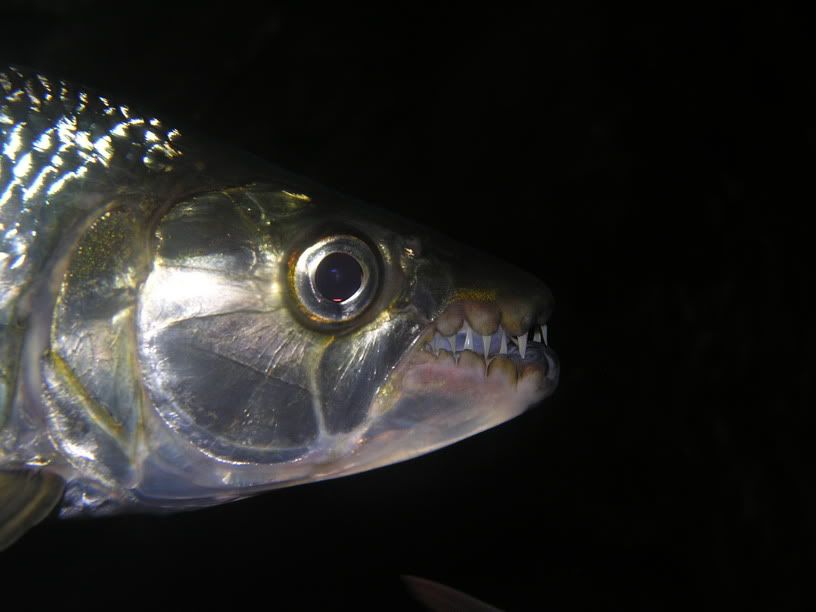 wow man, those teeth are

Oddball said:
I've never had any problems with 'Impulse Buying". They're just fish that I forgot I had planned to get.
Click to expand...

cool fish dude!!
how big are they?
M


"I am a wildlife warrior, and I will fight, fight to the death for wildlife." - Steve Irwin
H

Expand signature
Keep it simple and don't over think things.