RD. said:
Thank you, I'm certain that many hobbyists present & future will benefit from the info supplied by Kevin at TUIC.

neutrino for getting this ball rolling.
Click to expand...

Educational is almost an understatement lol. It will definitely help clear up any confusion that may exist from now on. it also furthered my want to purchase from Kevin (we are really blessed with a few good vendors these days). I actually always have a page on my phone open with tuic stock list pulled up. I haven't been able to try them out yet but I'm finally back from a 2 1/2 week vacation and about to finally check them out and see if I can score some terrors from another member! New fish day around the corner
Reactions: BigBeardDaHuZi
S

Love these fish! I had a breeding pair years ago then kinda left the hobby and gave up my large tanks now this is my first post since and now have 5 grow outs waiting on my 125 gallon. Very good thread and read.
Expand signature
Life is like a jar of peppers what you eat today might burn you tomorrow.

When I spoke to someone from the OCA (Ohio Cichlid Association) they said the fish was not a hybrid but just bread for specific coloration.

KarensFish said:
When I spoke to someone from the OCA (Ohio Cichlid Association) they said the fish was not a hybrid but just bread for specific coloration.
Click to expand...

That's another (and typical) speculative theory, but as explained earlier in this thread, that they're a natural, wild fish has been confirmed by several respected sources-- see video below.

I had (and bred) them in their early days in the hobby, when they were still rare and expensive. It would be very hard to top their natural, wild color without essentially line breeding them into something else, possibly based on a random mutation, like all the derivations of man made gold severums or the original pigeon blood discus. In fact, it's much more likely for sloppy hobbyists or poor breeding practices to water down their natural beauty or produce hybrids with common green severums-- already a problem. I imagine you could attempt to line breed them for more red coverage, and maybe that will happen, but I've yet to see better than a really nice wild or F1.

Can I ask a question I was sold a red shouldered severum and now I’m wondering if it’s the same as a red tiger severum another name thrown around is heroes rotkeil? This is my baby I’m starting up a 135 g tank that is in a fishless cycle right now and this will be my first guy added I’m also planning on adding some geos, electric blue acara and a parrot. I was told I should get some Cory’s and Congo tetras would go well in this tank? 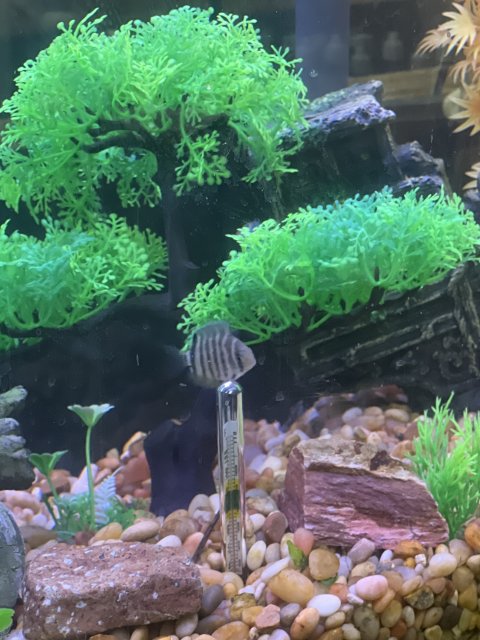 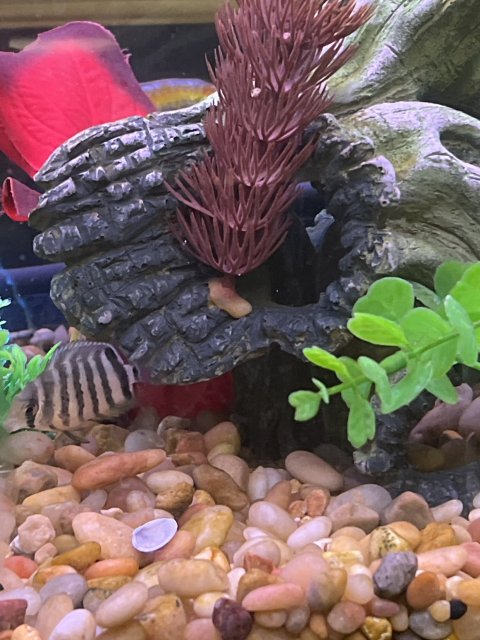 A Rotkeil and a Red Shoulder is the same fish. There is another Severum called a Tiger and I believe (though not certain) that there may be Red Tiger severums as well. Tigers seem to have a more prominent striping than the Rotkeil/Red Shoulder. They are generally seen as a more aggressive. I saw your pics but it's hard for me to ID the difference between a young Rotkeil/Red Shoulder and a Tiger Severum. Lastly, it sounds like you have a good fish list in mind. Some parrots can be aggressive. So, be mindful of that. I don't have any experience with Congo Tetras, though. Good luck with everything.
Reactions: Crreader

This is why common names are a problem in the hobby. “Red shoulder” or “rotkeil” are both names for Heros sp. rotkeil, an as-yet-undescribed species out of Peru. “Rotkeil” is German for “red wedge” and describes the area of red coloration behind the head and neck of the fish. The fish has also been sold as raspberry face, raspberry nose, rainbow severum, orange shoulder severum, red neck severum, etc. etc.

“Red tiger” is a trade name coined by Oliver Lucanus for Heros severus before they were formally identified. These are much larger, more aggressive Heros from Colombia, Brazil, and Venezuela. They also go by Curare as the original imports by Oliver were from the Curare region of Venezuela — not all severus hail from there, so it’s actually incorrect to label all of them as such. Unfortunately once a trade name sticks it’s hard to correct.

There are differences in Heros sp. rotkeil and Heros severus but they are subtle in juveniles and the diagnostic features are not 100% all the time. For instance, most wild-caught rotkeil have only 8 vertical bars, while most other Heros species have either 8.5 (severus) or 9 (efasciatus, notatus, liberifer, appendiculatus, etc.). But hybridizing in the hobby has led to commercially-bred rotkeil that show 8.5 or 9 bars. Ditto for wild Heros severus — most show 8.5 bars, but nearly every imported batch contains fish that also have either 8 or 9. Then you have the issue of aberrant barring; some fish have bars that are forked, fused, crooked, etc. which is a fairly normal occurrence in wild populations. Not all fish have perfect markings or the “correct” markings as the species are described.

Your young fish could be either rotkeil or severus. (It could also be Heros sp. Inirida but that’s less likely than the other two so we’ll skip that for now.) The markings look like a young severus — the wide gap between the 8th and 9th bar where the half-bar should be looks like severus. Also, the faint black spotting arranged in vertical columns which are overlapped by the solid black stress bars is typical of severus. But young severus are not common in the hobby and it would be weird to find them randomly mislabeled as rotkeil somewhere.

Wait until the fish is about 4” and post it in a new thread asking for opinions. By then the body shape and patterning should start to reveal more about its identity.
Last edited: Sep 9, 2022
Reactions: tlindsey, deeda, Crreader and 1 other person

Agree with Ryan, though imo it's unlikely you were sold severus labeled as rotkeil. Most people with severus (tiger, curare, etc.) know what they have by whatever name they're calling them. They're less common, so severus tend to be more expensive. Not impossible, but considering how many more rotkeil are in the hobby it would be a fluke of ignorance and wrong labeling on the part of a seller to get severus labeled as rotkeil/red shoulder, at least in my dopey opinion.
Reactions: tlindsey
You must log in or register to reply here.
Share:
Facebook Twitter Reddit Pinterest Tumblr WhatsApp Email Link
Top Bottom