Brick is still crabby. Boss is curious and comes up to see. After his curiosity is satisfied he heads back to his turf. Chip's kind of hanging around in the background not getting involved. 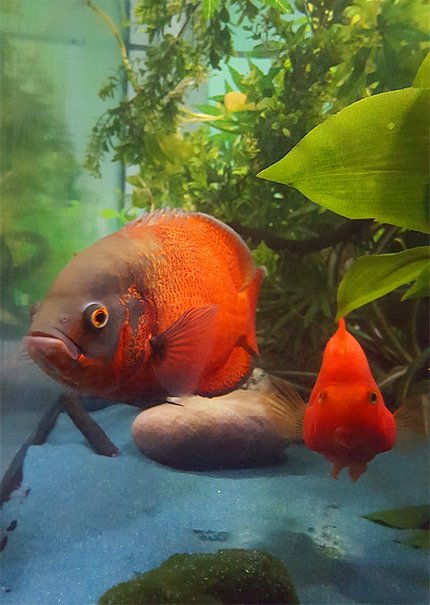 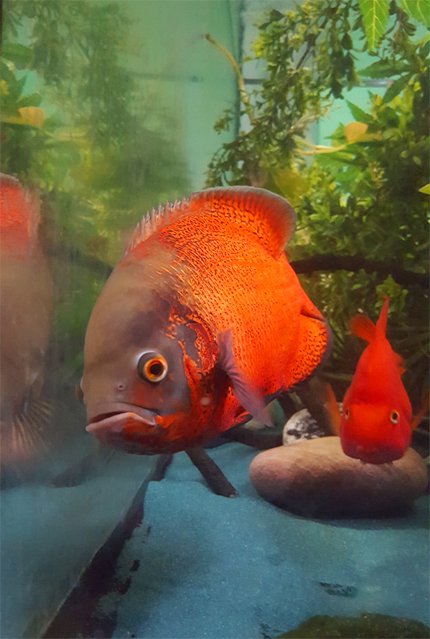 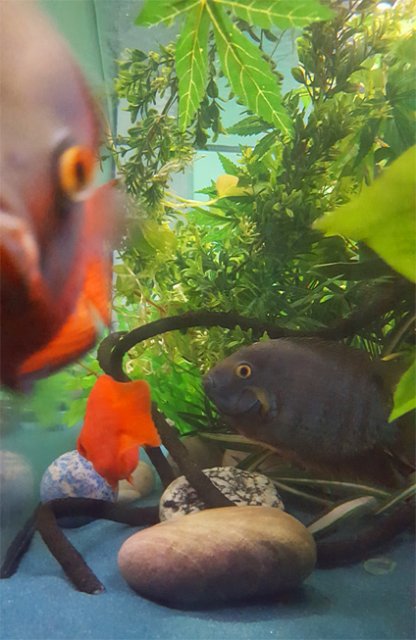 Kong and his never ending decorating. His new setup... 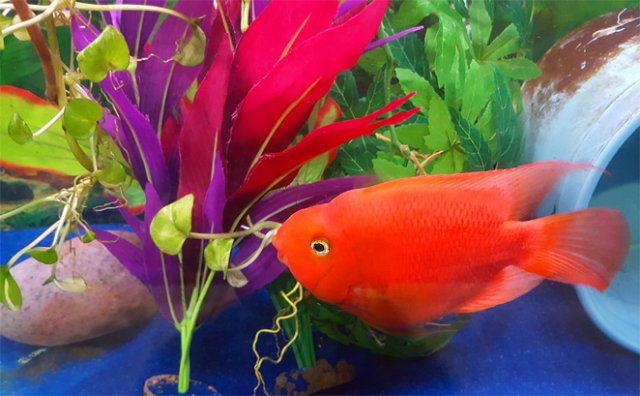 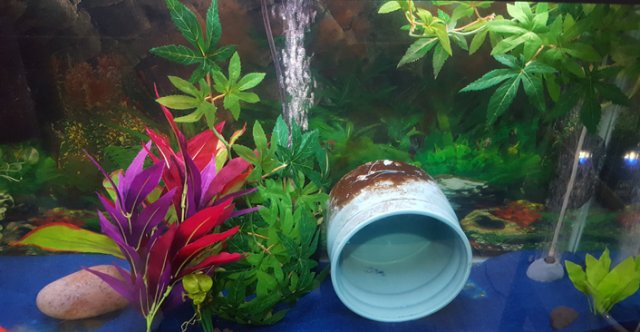 Boss is really observant and watches everything outside of the tank. When he's through he heads back to the 'jungle.' 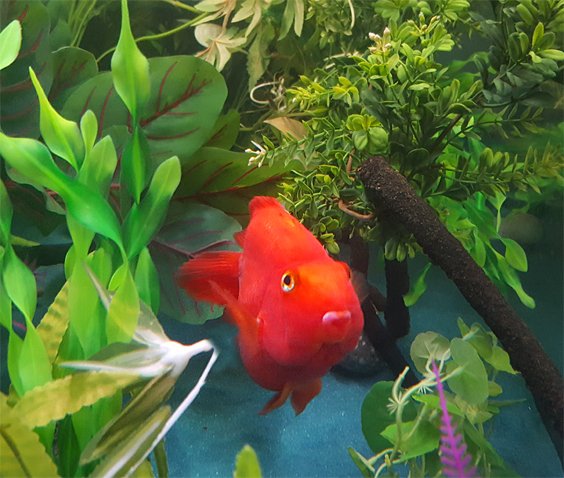 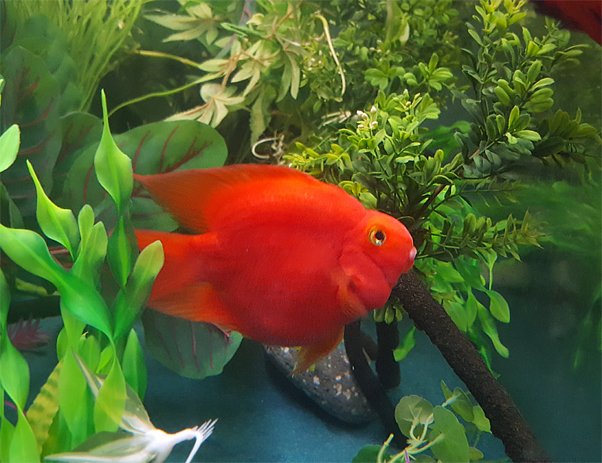 Patch on the other hand is feeling fabulous. Always sassy. 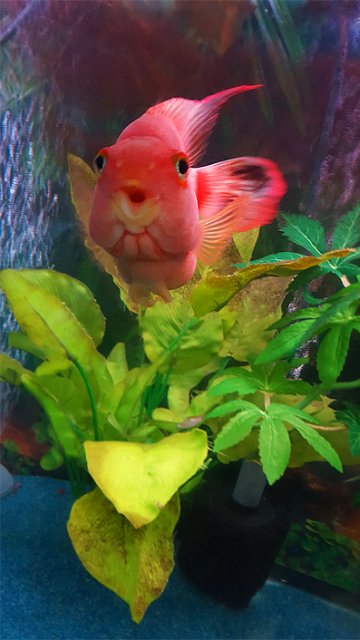 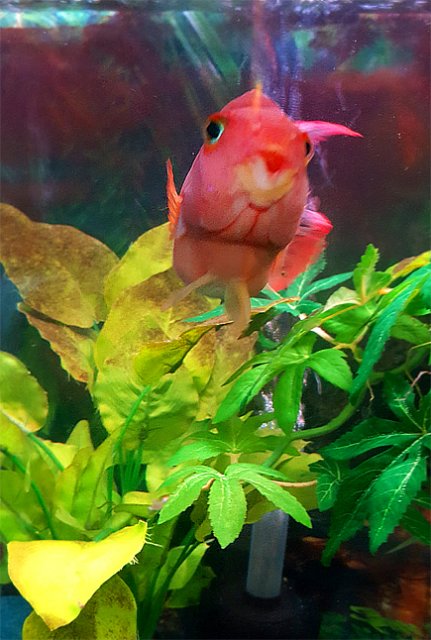 In the "My fish Crack me Up" thread I posted about my nutty Severum Chip. Lately he's getting beaten up, always at night. About a month ago Brick took three chunks out of him. This past week I did my daily morning feed. I didn't see Chip. Searched for a few minutes and thought the worst. Finally I saw him pressed between some plants along the back wall. I managed to coax him out. He had some stripped scales and a chunk missing from his top fin. He's coming up on 7 inches and is a pest to the other fish now. So they kick his @-- and the dummy comes back for more with silly displays of aggression. Silly because he can't do anything against the tank muscle but never seems to learn. He irritates the Oscar by following him everywhere. He annoys the Blood Parrot by constantly trying to "take" his territory. Chip has plenty of space to make his own turf but he keeps going after other spaces. So he gets beat up. When Brick (Oscar) has his back turned Chip tries to nudge his tail. Brick doesn't see Chip as a threat or worth fighting, so he just swims on and ignores it. Chip's also had a split tail on 2 separate occasions. He pushes his luck, too...his lame 'attacks' get him chased around the tank. He's bounced back and forth between Boss (BP) and Brick. Sort of like volleyball.

So here's Napoleon healing from his latest wounds. You can see the whitish areas around his gill and top of his head. His top fin is starting to close up. 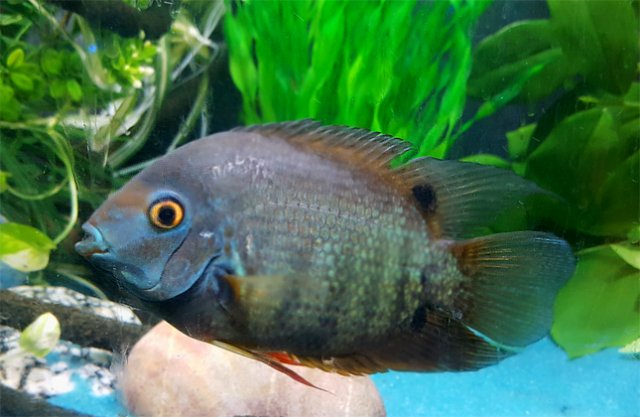 Chip is constantly trying to challenge Boss with pathetic results. He's 0 and forever against the Parrot. He can't lip lock with any strength and Boss is three times his mass. Here, he gets bounced out for intruding. 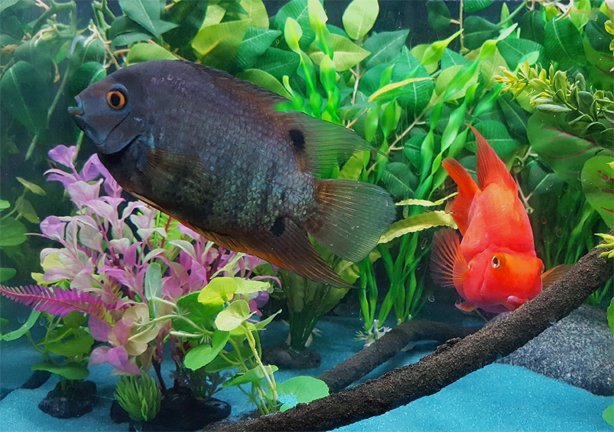 Chip really has no territory. Currently he's 'allowed' to stay on Brick's side. But the Oscar only allows a small corner. Brick often patrols the tank and if Chip is starting trouble he'll chase the Severum back to his 'room.' Chip is the tank nomad...he floats around looking for a soft place to land. Boss forces him into the upper column which is where you see him here. He'll nestle in plants sometimes. 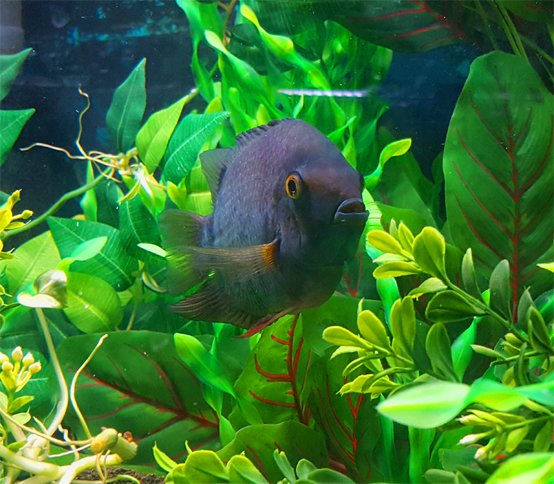 Here's some Brick goodness. He's bulking out now. Will probably measure him this fall. 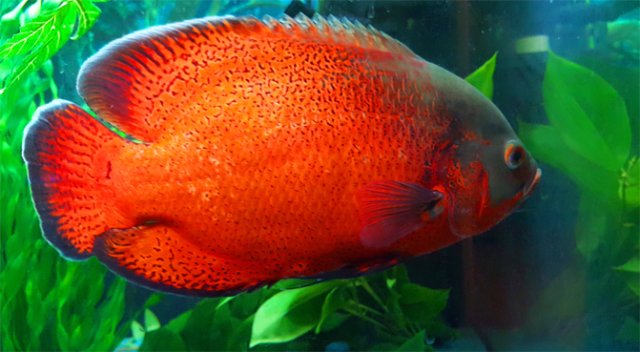 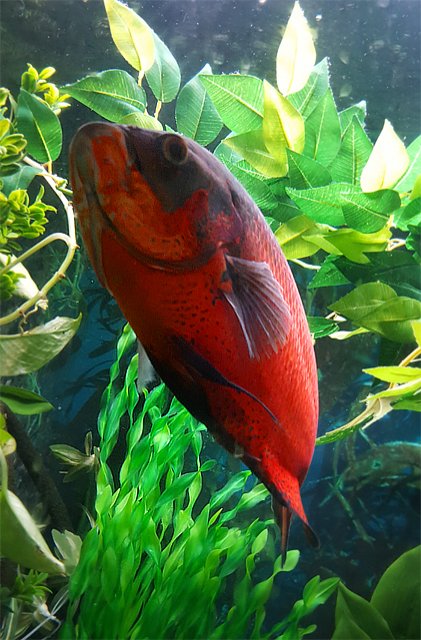 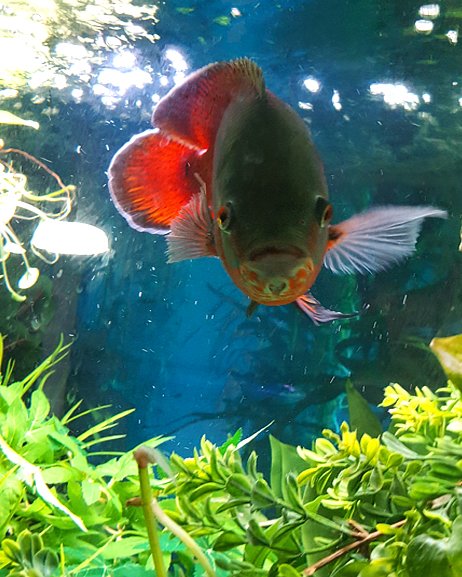 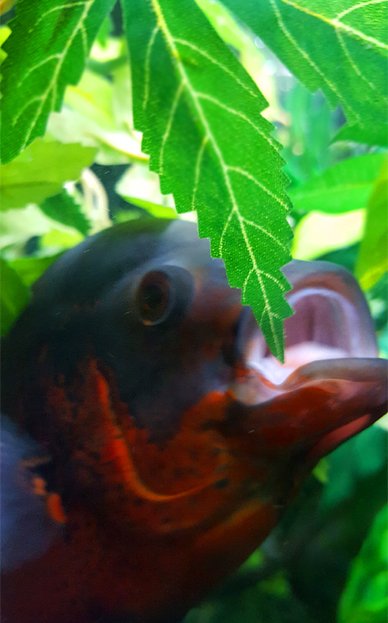 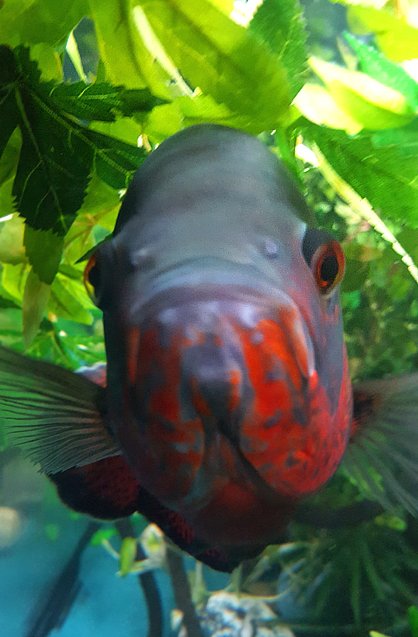 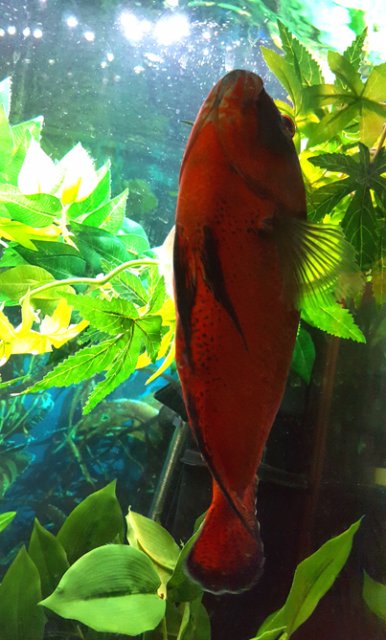 Brick pays Boss a visit. He's pretty twisty in the second pic...he saw me with the camera and gave me the eye. 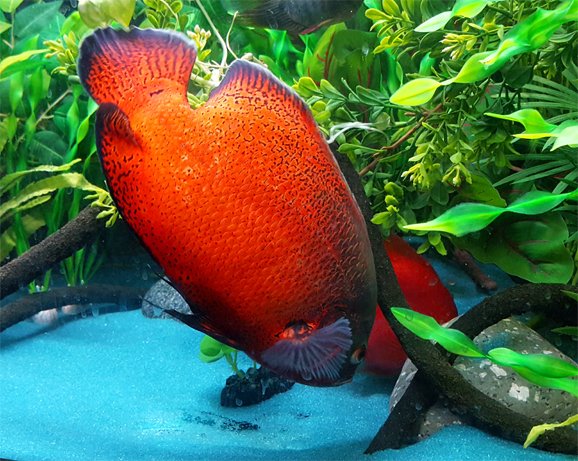 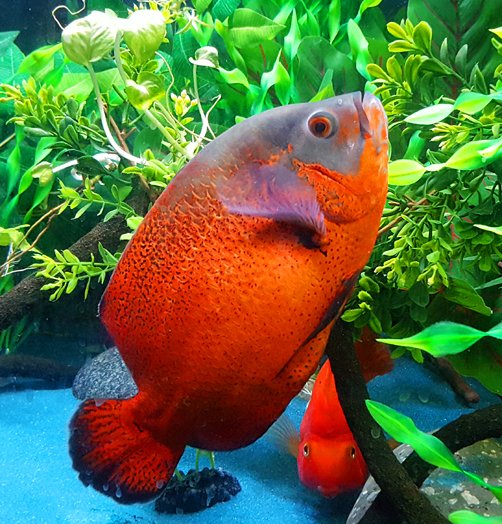 Brick and Boss wait out a water change. Everyone huddles up during this time. 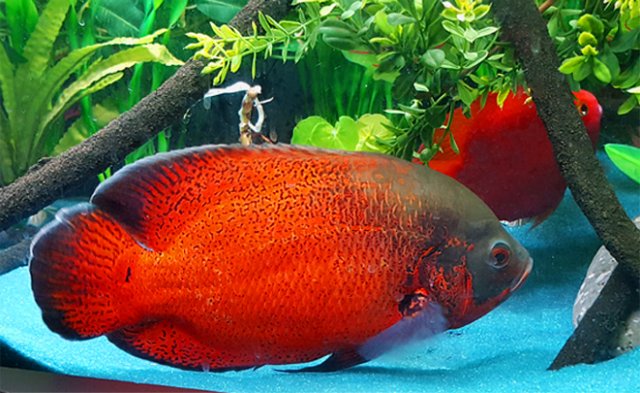