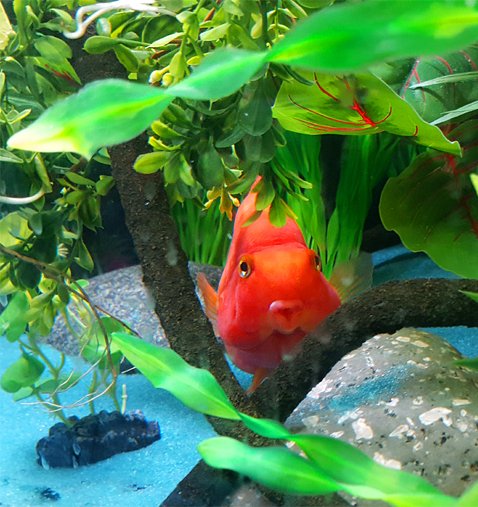 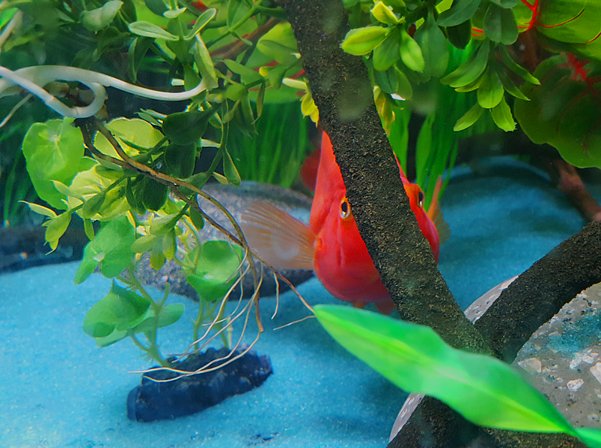 Here's Patch goofing around, standing on her head. She hung suspended like this for a while. Then she decided to play. 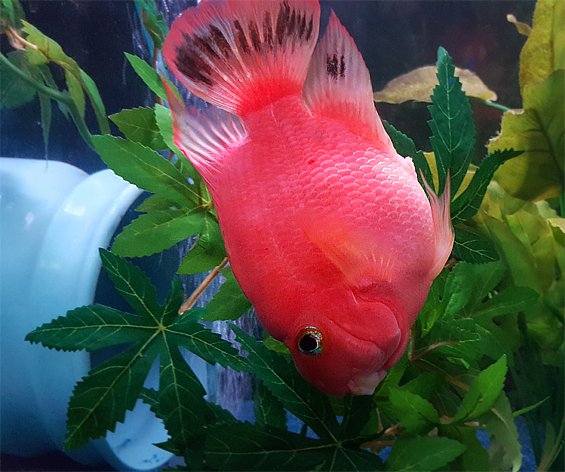 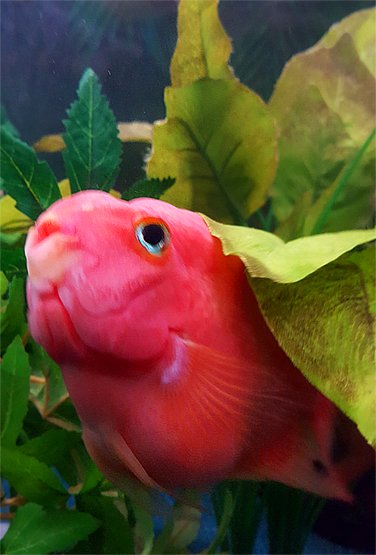 Brick is fascinated by the bubbles at the surface. He never stops moving all day. At night he relaxes on the floor or under the pothos. 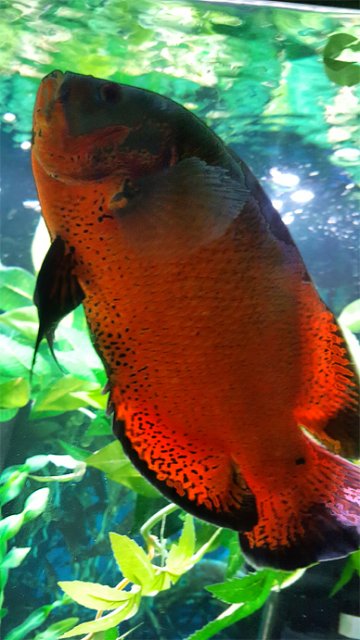 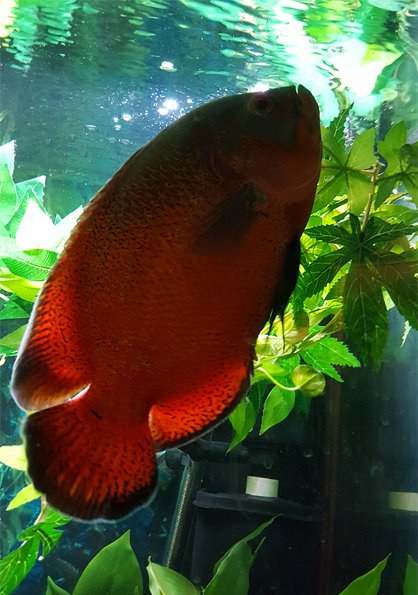 After several days of being chased and banged around my Severum Chip seems to be finding "quieter" areas to relax in. He's allowed to sleep on Brick's side. He still has issues on Boss' side but the Parrot doesn't care as long as he's near the surface or in mid column. If he comes down into Boss' grove its rumble city. And I've got a partial answer to the mystery of who is doing the beating up. Late at night when Chip would instigate a fight Boss would go after his fins. Still not sure who's doing the strip scale thing but it could be either the Oscar or Parrot. Boss sometimes goes into Chip's side when he doesn't move fast enough (this is when Chip starts it). But at least my bubble headed Severum is finally getting it into his head to "go along to get along". I'm expecting some lime pothos in the next few days. The plan is to add that so Chip will have more surface options to hang out at. None of my fish like open area up top unless its to eat or play near the powerheads. Given a preference they'll hang out under a canopy or shaded plant areas. Brick simply loves swimming through and under stuff, he does it all day.

Looks like Patch will be laying eggs this week.

Brick has been in an aggressive mode the last couple of weeks. It could be an age thing...he's just under a year old. I've been getting 'puffed' at every other day and now he is starting to fight the glass. Yesterday the black edges on his fins went completely transparent for a few minutes while he dug wildly at the sand. Sometimes he'll wash out to a watery orange color (usually early in the morning when sleeping) then changes back to his normal bright shade.
Reactions: Fishflyer

Chip creates his own problems. Tonight I saw him trailing Brick and attempting to nip his tail. This is obviously 'payback' for being banged around so much. No damage happens. The Oscar (pretends) to ignore him and swims away leisurely. Then he suddenly turns and blasts Chip, sending the severum shooting across the tank. For good measure he'll chase the severum round and round and for a minute, forcing him into the plants.

Chip does the 'flivver fin flick' and body shake thing at Boss but its a waste of time and Boss ignores it. None of the severums' intimidation moves impress the parrot. Boss charges and pops him, so Chip does the sidewinder shimmy shake and backs off. The parrot rattles him more even though he runs from the O. From what I've seen the reason is that once he starts a fight with Boss he'll have to do it all day, every day. He can't handle that level of aggression. So he gives up to take a break. Then he starts up all over again.

Just like with humans...some are brilliant, some average, some dumb. My severum is all territorial aggression with no self preservation instinct. Chip may just be...dumb.
Reactions: Fishflyer
P

I wasn’t able to read through the entire post but was intrigued by the pothos I saw underwater in your first few posts. Just wanted to ask how the pothos is doing underwater and how long it’s been there? Great looking tank btw...love the blue sand

phreeflow said:
I wasn’t able to read through the entire post but was intrigued by the pothos I saw underwater in your first few posts. Just wanted to ask how the pothos is doing underwater and how long it’s been there? Great looking tank btw...love the blue sand
Click to expand...

Thanks! I love color and believe fish are affected by it in environment.

Here's the thread on what I did with pothos

If there are good nutrients in the water it will do fine for long periods of time. My Severum unfortunately has been stripping stems and eating portions of it for some time. Key thing is the roots. If they are intact you're good. I replenish it by just getting fresh pothos pieces , rinsing and just tossing them in. My fish love playing and hiding in it. My Oscar sleeps under it. I still have a lot of it in the tank from last year but snip off weak stems and leaves as they develop. The pothos that grows completely in water has small round leaves and grows in tight clumps. I just let them float and go wherever they want. Keep the roots in open water. Great for nitrate reduction too! You'll see pothos in the most recent posts as well. Random pieces float and "tangle" in the other plants. I like the jungle look it gives.

I ordered some "lime" pothos that arrived yesterday in small pots. I will be adding that later on. Will take pics.

Information on the sand is here: It's SANDTASTIK, from a Canadian company

The "Lime" pothos arrived healthy and in great shape, not a bad leaf anywhere. Roots are solid and good. I cleaned off the soil and washed them thoroughly. Currently they're sitting soaking. I'll place pieces in the tanks later. The roots are so long it may be tricky pulling them apart, but that's what I want, big long roots. That way the plants can start absorbing fish waste right away. Love the bright green yellow color, will make a great contrast. 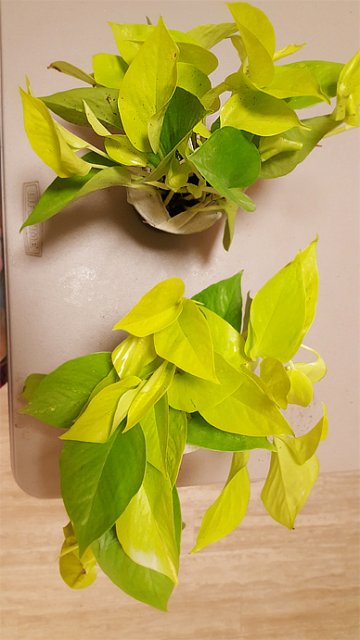 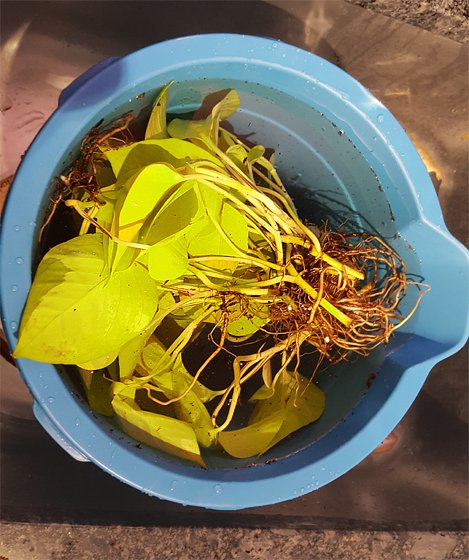 As I predicted Patch laid eggs this week. She always seems to lay them overnight (I'll find a tank of eggs in the morning). She had a huge load this time. The canister is full and piles of eggs are scattered in the sand. She's pushed the piles around some, breaking them up. I don't bother her during this time, she won't eat anyway and stays in her house for about 4 days. So I leave her to her work. She'll peep out when I enter the room then go back inside.

When she lays her color goes nearly white. I'm surprised she colored back up so quickly this time. Notice how her color is patchy. She transitions into this (hormones I guess). Usually she stays pale for three days or so. With a big load she lays sloppy and eggs are everywhere. By next week she'll be back to her solid flamingo pink color again. You can see her nuchal hump has disappeared. It only appears the week she lays. 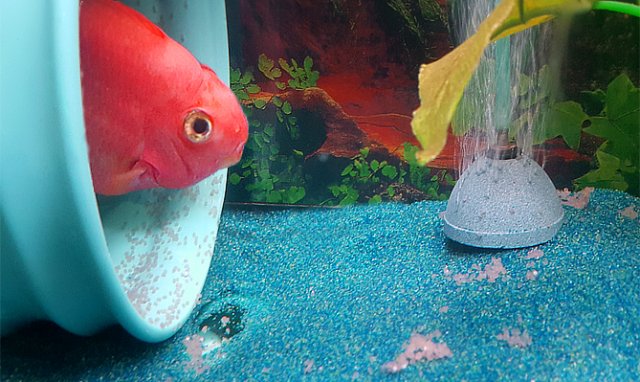 I've been going nuts with the pothos, and it's in every tank now except the brackish.
My herbivorous fish are constantly munching the roots too. They eat less pellets but getting fat anyhow.