Whee! Got news that my new stand is ready. I was hoping to get it before Thanksgiving but it will depend on when the Batfish crew can come over to move it and the 225 back into the fish room. Meanwhile, everyone is still doing fine in their totes but I get the sense they're sick of it, especially my Severum Chip. He's finally forced Cash (Syno) away and into the corner so he can have some small peace. Boss (BP) is lazy in his luxury sized tote, eating and living large. Literally.

My mischevious O Brick continues to find ways to amuse himself in the bath tub. I put in some large fake lily pads for cover and to reduce his stress a bit (not that he was all that stressed to begin with). So in the time he's been 'tubbed' he's:

Dragged the heater around, removing the covers
Dragged the large air disks around, banging them against the walls of the tub (sounds like bottles smashing)
Turned the air disks upside down so they can't bubble properly
Tossed mealworms and pellets onto the tub surround (I'm cleaning it daily)
Moved the bio media bags into piles from one end to the other
Shredded the remaining giant marimo ball into a sleep pad he rests on
Flips the fake lily pads upside down and pushes them out of the water. I 've found a wet one stuck on the surround near the water line.
Tosses water out of the tub for me to mop.

Pretty much glad all this will be coming to an end in the next 2-3 weeks...

Meanwhile BOBO the Chocolate is doing extremely well in QT...relaxed and eating like a champ. He loves mealworms, just like Brick. He does this cute thing where he hangs in mid column tilted up, waiting for something to eat. Already has me pegged as the "goody lady." I really get what people say about them...he's like a much calmer Oscar. And brother, can he EAT but he does it quietly, picking up one pellet at a time off the bottom and steadily munching. Unlike Brick, who at similiar size would jump the surface, suck clusters of pellets and grab my knuckle.

Brick is doing his best imitation of a Chili Pepper Oscar...his head has light shading and his orange/red is still bright. His fins are faded to clear instead of the normal orange with black edges (no doubt because he's in a white tub) so all his 'black borders' are clear. The light background hasn't affected his red at all. The color change is remarkable but I expect it to switch back once he's in his colorful environment again.

And...he's had another growth spurt.

We're coming up on one year and I'll be doing a separate thread for that. Measurements will be done in a month.

Chip looks like a perch now. Boss is a big ball with fins...and Cash is thicker too. Couple of pics showing the giant lily pads Brick has for cover. The pads are around 8" and come in various sizes from 2-8". Ordered off Amazon. I use these in all QT tanks for stress reduction. Especially good in smaller QT tanks where space is an issue. Brick pretty much hangs out underneath unless he's near the air disks or heater.

And of course, a pic of the superstar himself. You can see the clear edging on his tail in the right corner. 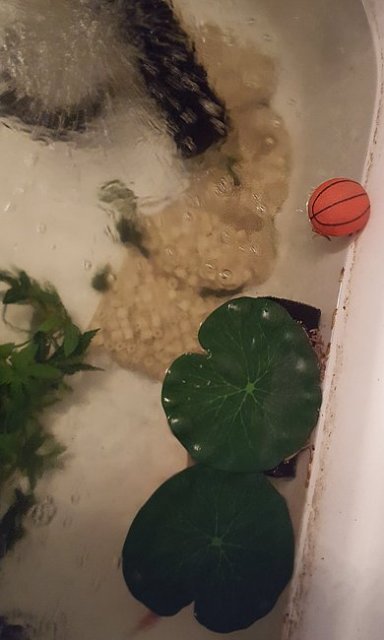 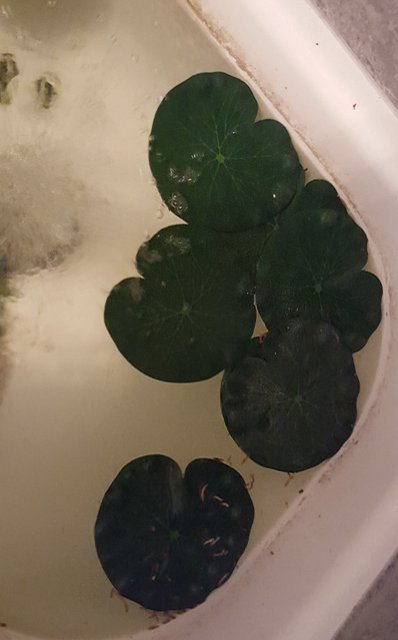 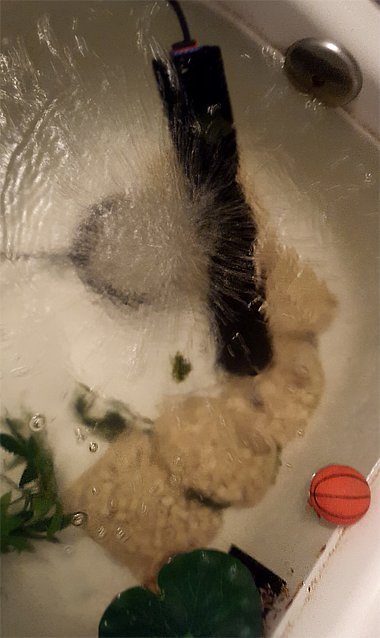 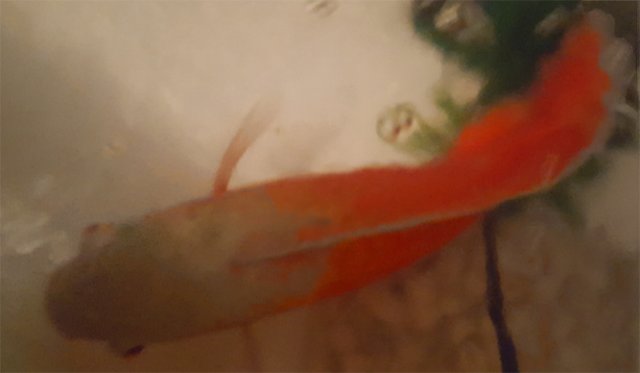 Brick lays down in the tub, protesting for Oscars everywhere...CLEAN WATER IS EVIL. KEEP YOUR PEE AND POOP!!

Notice the dramatic change in Brick's coloring. All of his black pigmentation has disappeared, both in his fins and scales. Even his tail spot is little more than a sliver of black. This is a classic case of environment affecting appearance and adaptation. My other fish look completely washed out in their tubs and dimmed lighting (the tubs have lids). Amazingly Brick's red/orange coloration is unaffected!

Pic is NOT to scale at all...Brick's getting BIG. 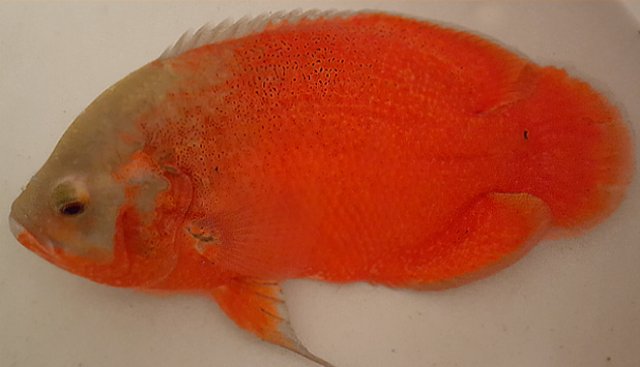 Well I made it to my LFS today to find a replacement for the Syno SPIKE. As usual a madhouse on Saturdays. So I go by a tank and see an eye catching blue fish...I couldn't believe the luck. An Acara! Those were on my potential list but I had settled for another Syno. Most of those were gone too except really tiny ones. They had a mob of pretty good sized upside down cats but they appeared to be stressed from crowding.

So I see this chunky Acara sitting on the bottom. The tank was near a busy corner of traffic in the store and full of various fish. So I noticed that despite his refusing to move this fish was colorful, wide and healthy. Apparently he was still settling in according to one of the store attendants since they had a few only two days ago. He was the last one left. So I decided to take the plunge. Only 14.99.

Got him home and put him in QT with BOBO the chocolate cichlid. He flew around the tank twice then settled on one side. A minute later he colored up showing blue and silver highlights. The murky light pics don't do him justice! He's 5" flat and just over an inch thick. Say hello to the newest addition, SKY.

At first his color is washed out, to be expected. He's just placed in the tank in pic #2. 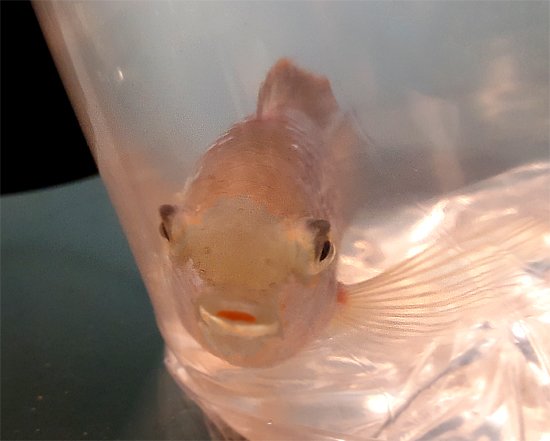 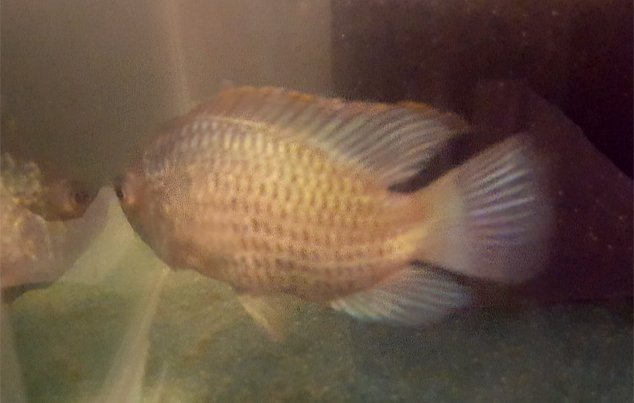 He colored up quickly a couple of minutes later. Can't wait to get this guy in the big tank to show off his true color. He's got a bit of attitude already I can tell. Not phased at all by the camera. In the last pic BOBO cruises over to check SKY out. SKY seems comfortable on the side of the tank near the filter. I put a few pellets in but he isn't interested right now. BOBO ate them anyway. Once SKY started to get settled he wouldn't stop moving around. Completely opposite of being in the store. 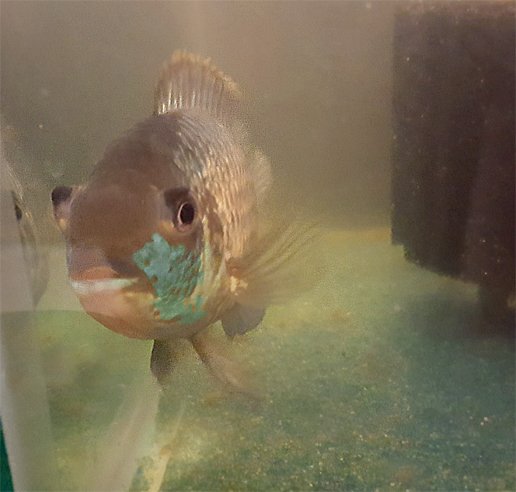 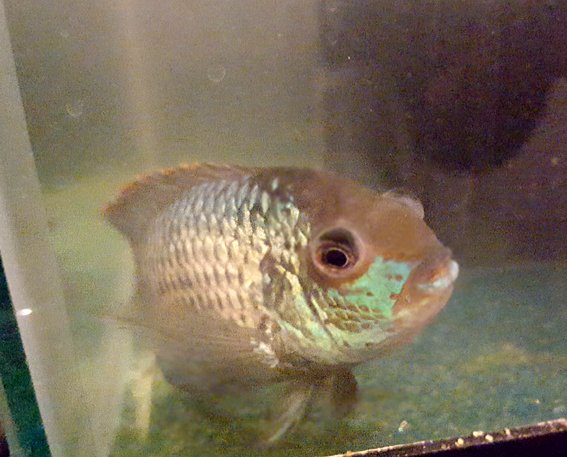 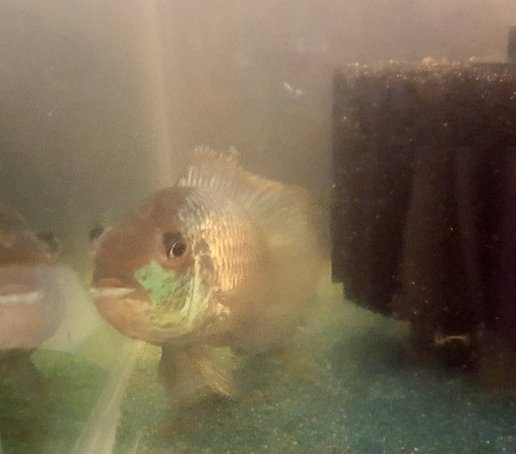 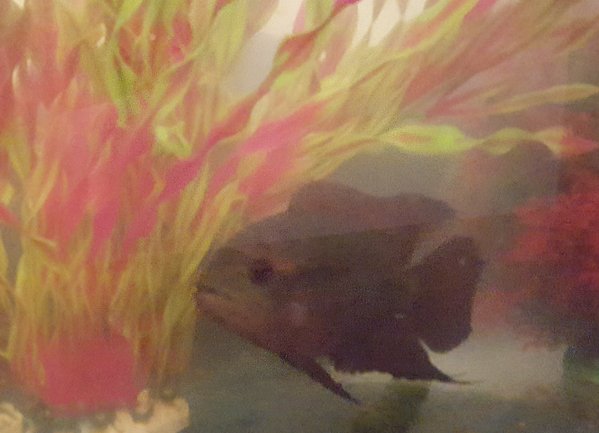 I have a divider that will be arriving tomorrow for the QT tank. After watching things from a distance I've seen the Chocolate BOBO give the acara SKY some "low key" bullying. He'll drift over to crowd the other fish and take a lazy poke (acara's too fast). Started doing the 'fin flick' thing, too. The acara ignores it for the most part but I noticed one of his side fins is slightly tatty. So SKY is in a bucket right now until the divider goes in. I don't want any stress related nonsense.

Cichlids are a trip. Even the mild ones can get pissy in jig time. BOBO has been in the tank just over a week and acts like he runs the joint.
Last edited: Nov 18, 2019

Why do you type all their names in caps, just so I know?
Fish: FEED ME SLAVE

NoobAquarist said:
Why do you type all their names in caps, just so I know?
Click to expand...

Some folks said they didn't know which fish I was talking about. So, caps. Not a big deal to me, really. I realize everyone doesn't follow all the threads so it helps to connect the dots.

I had some Pvc custom cut and sized on EBAY. Was looking for a couple of simple hides for the main tank. The clear Pvc is 2 1/2" diameter opening, 1 foot long. This is for the catfish Cash. The large gray piece is 6" diameter opening and 9 inches long. This one's for Boss, the BP. He got too big for the pot he had last year, and larger pots are too bulky and don't look as nice. The clear piece will be painted solid black. The gray piece I plan to "airspray" with plasti dip to give it a textured look...the gray blends in well but I want to give it more interest. This is a perfect solution for big cichlids, you can order pieces up to 12" diameter opening (larger gets pricey). The length can be cut to whatever you want.

The Pvc is heavy, you won't need to worry about sinking it. The gray piece weighs around 2-3lbs. 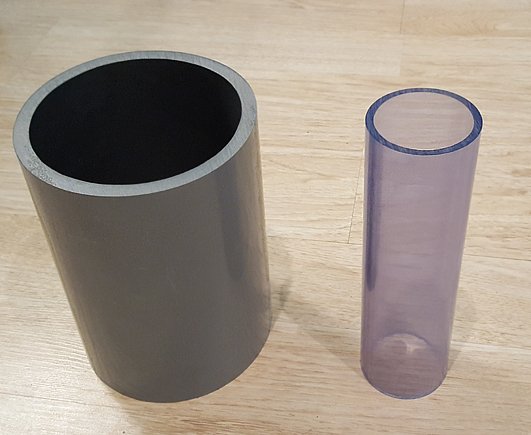 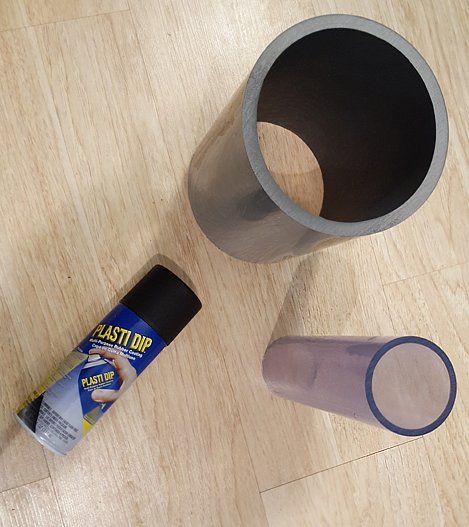 Huh. I had no idea you could order custom size PVC online.

I need to get me some of those
Fish: FEED ME SLAVE 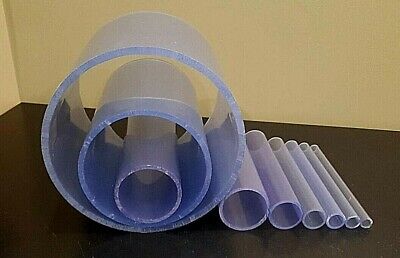 Pvc pipe manufacturers refer to schedule 40 pipe as clear or transparent, even though thereis a tint. For use with standard pvc fittings. Nominal Pipe Size (in.). O.D. Average I.D. Minimum Wall.
www.ebay.com


gray piece I got here: 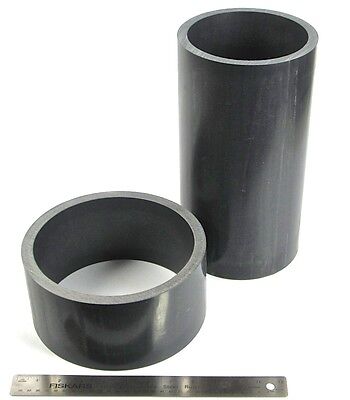 PVC pipe cut to the length you need it. Gray schedule 80 pipe. Burrs are removed with 80 grit sanding belt.
www.ebay.com