Well, since my convicts need to be moved out of the 90 I picked up this guy off craigslist for 95 bucks since it came with a stand and a heater and an ac20. Previously the guy I bought it off used the tank for corals and small reef fishies, and he was all excited that I'm using it for cichlids, apparently he used to breed africans/ca/sa's in a huge setup too. Yes, pricier than I wanted it to be, but the guy was 10 minutes away, and anything larger would have required a major tetrising of the apartment, still cheaper than petco too. It's a clear for life tank, similar ones with the stands at the lfs were nearly 400 bucks with no equipment! For now the heater and filter he gave me seem to be just fine. I'll pick up a thermometer and substrate/driftwood on sale or free later.

Here it is! (Folding laundry lol.) 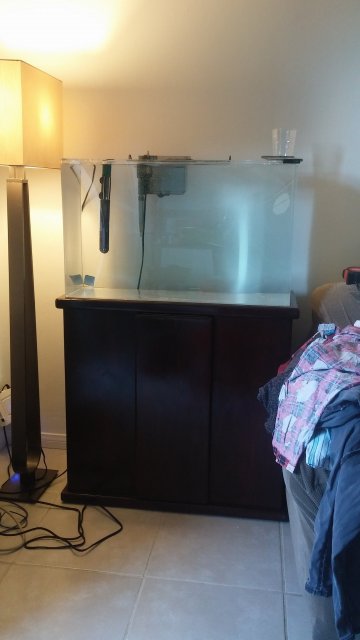 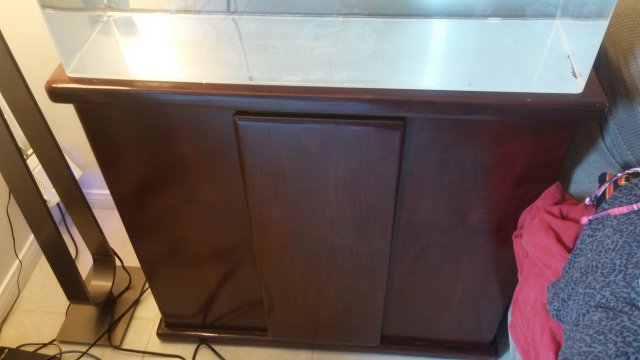 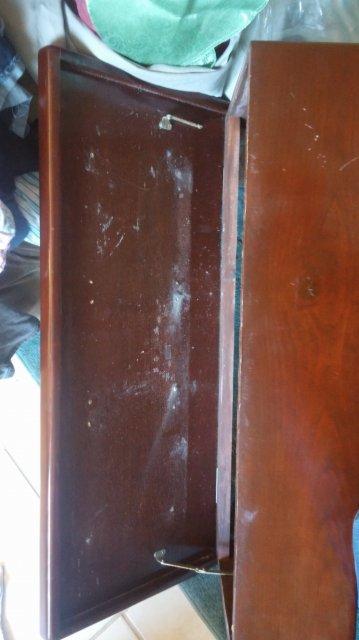 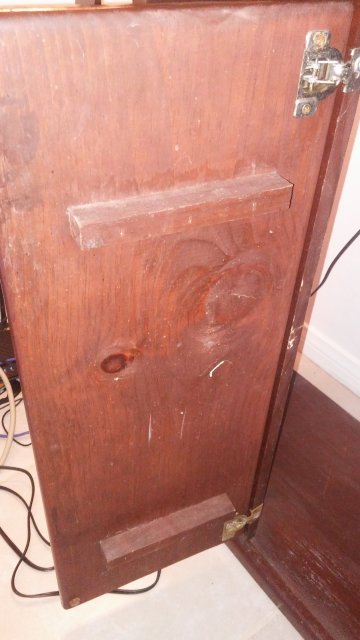 Has only a few minor scratches, was expecting more since it is acrylic. It looks pretty stable and with no leaks or sketchy bowing issues. There were a few salt/calcium deposits but vinegar and a toothbrush worked just fine. I will be polishing the stand tonight with some nice homemade wood polish (oil n vinegar) that I always use. I may end up staining the wood darker/filling in a few dents depending on if I have any supplies left from redoing a vintage bedside table. The rest of my furniture is a more chocolatey brown haha. The top also needs a pair of new hinges and a deep polishing, should be an easy fix.

He said it was custom built, IDK if that is true it but it has a few modifications already and it does look like it was handmade by someone, could be at home, could be at a factory haha. It is made of some very very lightweight but sturdy plywood, not sure what type. Because it is so light weight though I'm concerned about the weight. What would be the best way to go about fortifying it? It looks like at one point it had some small shelves or bracing of some type, there are a few cuts in the wood and those things on the door. If I add shelves do you think it would help? I could use the extra storage in there anyway. So far it seems to be holding the weight, I'm guessing that tank weighs around 300 full, the tank itself is less than 15lbs. I will be adding some 10lb slate and granite river rocks and probably 25 lbs of sand for the convicts to dig in too.

I'm also concerned about the lighting since no sunlight comes in here (north facing dark mushroom cave) and I need something for basic plants/green/diatom algae growth on the back panel. I would have bought the guy's lighting that he had but he sold it last week, he said it was for corals anyway. Is there a cheap website where I can get daylight LED bulbs for cheap and mount it safely inside somehow? It will need to be somewhat waterproof and I would prefer it if the bulbs were interchangeable in case they burn out fast. Do you think a home depot fixture of some type would fit in there? I will only be adding a few basic plants such as hornwort, vals, and possibly an anubias, depending on my aquascape. I don't care about algae since I want the convict fry to live off of that as much as they can so they become plump tasty treats for the rest of my fish. Also, I will probably transfer algae rocks in and out for my plecos and sae's. They need to be very energy efficient. I don't want to know what the power bill is gunna be like this month, already have 5 tanks running (2 will be shut down/moving to my fiance's office soon). Oh my.
S

Being in CA, you might look good at the stand for sturdiness. I don't think adding shelves helps much. I think cross-braces might be better.
Expand signature
Nutrient Removal Discussion
Research Studies
Reactions: GamerChick5567

Well as an update I put the substrate in just now. It's caribsea peace river. There's some quartz, chalcedony, and I believe a red jasper chunk I collected on my last desert trip, a flower pot, and my favorite big lava rock. I will go hiking after these rain storms stop to find more cool rocks. 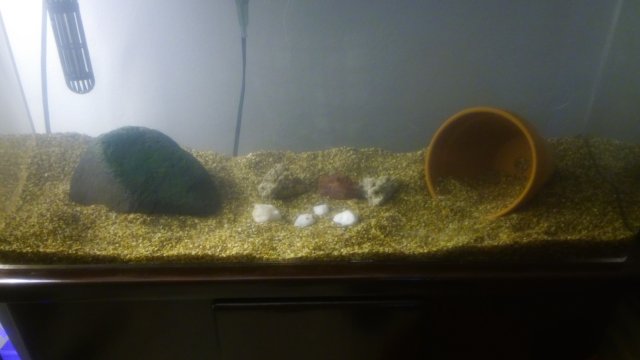 My light should show up tomorrow. It's a 10 watt led floodlight I got cheap on amazon, gunna see how it will be for growing hornwort and algae haha. I was mad, couldn't find any other lights cheap enough so I hope it will work good and will be easy to secure to the lid.

The convict pair will go in there tomorrow if I can manage it with all the other stuff I have to do in the morning. I will also be fixing the corner of the 90 that they completely ruined after I take them out. I will probably take extra sand which they piled on top of all my other river rocks and put it somewhere in their new jail. Not gunna do too much heavy aquascaping on this 29, learned my lesson haha.