If yes, what is your ammonia?
0ppm

If yes, what is your nitrite?
0ppm

If yes, what is your nitrate?
20ppm

L200 (Green Phantom Pleco); whitish stringy growth on the tips of its front fins; both fins look the same.

I checked out multiple sources and can’t quite find a match to what I’m seeing. Yes I also read through the “Fish Health Diagnostic” page, so here we go:

4. Tank has been running for 4 years.

5. In the tank are 3 M. Dayi (black spotted eels) all three between 20-26” long; 20 tiger barbs; the L200 of course (around 7” long, had for just over a year) had the oldest male eel (26” measured with tape measure)since the tank was set up, the two females are 2 years old, 20” for one, 22” for the other. They’ve lived together for a long time now and I’ve never seen visible aggression from any of them.

6. Yes they were quarantined before adding to the main display tank.

7. Tank sits at around 74 degrees during the winter and 78 during the summer, the fish room has a separate thermostat.

8. The tank is planted. 4 Different kinds of crypts; several water sprites; some hornwort; duckweed, salvinia, and Amazon frogbit over about half the surface; roughly a square foot of Java moss on wood. All plants were grown in my own tanks from cuttings I propagated between six months and 6 years ago.

9. Filter is a Fluval FX6, large pre-filter gets thoroughly cleaned weekly, filter gets a full clean (with tank water so as to keep the bacteria alive)

10. There is a power head in the tank, really not sure of the GPH, but it’s been in the tank longer than any of the current inhabitants. I heat the fish room, so there is no heater in the tank. Lighting is just two cheap LED shop lights since all the plants I keep in there are very undemanding.

11. Fish room with the tank is in the finished basement, there is no natural lighting hitting the tank at any point in the day. Aquarium lights are on 8 hours a day.

12. Last water change was about a week ago, I noticed the odd fin growth while starting this week’s WC. WC happen every 1-2 weeks, when my schedule allows, longest the tank has ever gone without one was a month while I was recovering from brain surgery and even then, nitrates didn’t top 30ppm with all that hornwort and duckweed. 50% is changed with every WC, I condition the water with Seachem Prime.

14. Behavior has been normal, but it’s a pleco, so 90% of it’s time is spent hiding under a plant or piece of wood. The only oddity is these stringy white things on the tips of it’s front most fins.

15. I have not done any treatments, this was only noticed 24 hours ago.

16. Picture will be attached to the post, it is proving extremely difficult to catch a good picture of them since they are a pleco and quite difficult to catch a clear view of. The tank water is not yellow, I just have a sh*t camera; I only remove algae if it grows on the front viewing glass, so it grows on the other 3 surfaces freely (aka the visible algae on the back pane of glass).
Any ideas or assistance is appreciated, I will continue to try and get better pictures, but this is the best I can do for now. Oh and both fins look almost identical as far as the stringy growths go; It is not a torn fin, the fins are definitely intact.
I will try and answer any other Q’s as best I can. 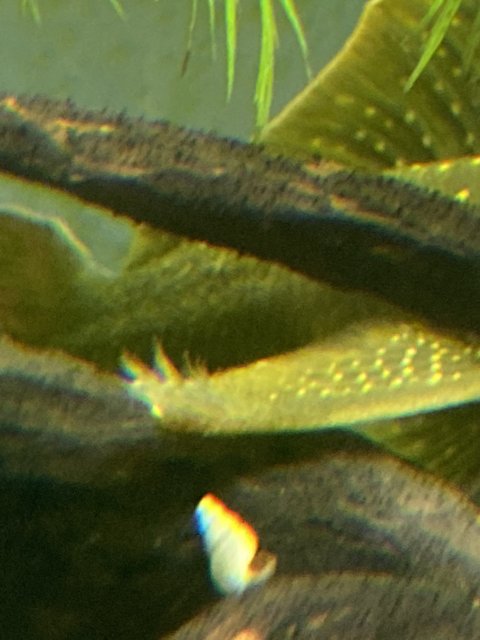 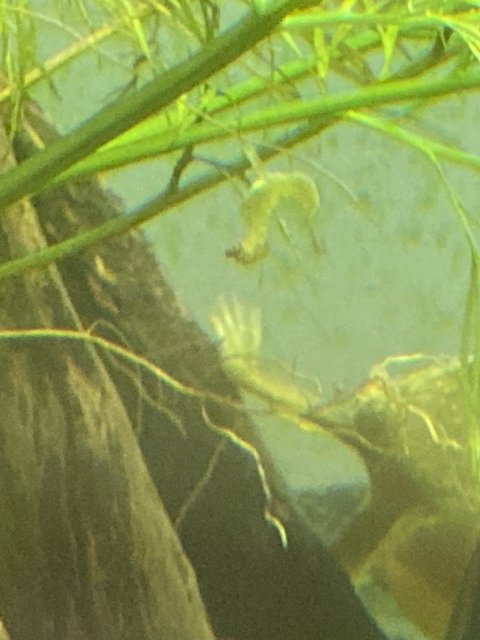