can someone tell me some of the diseases that are common to polypterus so i can buy the risght stuff?

thank you in advance!
J

witch meds do you have?

Parasites particular to Polypterids
While generally hardy fish, bichirs can get many of the normal standard fish
dieases however there are some specific to bichirs and those are the focus
of this post.

Monogenetic trematodes(skin and gill flukes)
Macrogyrodactylus polypter-malmberg
Macrogyrodactylus polypteri- may be found in wildcaught P.senegalus form Gambia
These resemble fine hairs or very fine pieces of thread,they are visible to the naked
eye as symptons include rubbing and rolling its body and thrashing it can be cured
usually by using Jungle labs Parasite guard at 3/4 dose.(this is the most comon
parasite i have seen)

Lernaeidae (parasitic crustaceans)
Lernaea haplocephala - May be found on any wildcaught polypterid
This is a species of anchor worm i'd suggest parasite guard 3/4 dose
So you can see along with the more common parasites.We have some
species specific ones.Here i cannot help but bring up the importence
the practice of quartine is, especially with bichirs as many are wild-
caught .And the risk of contamination is to high.All new specimens really
need to be quaratineed for 4 weeks

"I am Grey.I stand between the darkness and the light,between the candle and the star."
M

Has anyone seen a bichir with ich? My rope fish got ich, but none of my bichirs ever showed any of it. EVER. I've had three outbreaks (in 3 different tanks) and none of the bichirs in either tank showed any symptoms.
I

Merbeast;1289448; said:
Has anyone seen a bichir with ich? My rope fish got ich, but none of my bichirs ever showed any of it. EVER. I've had three outbreaks (in 3 different tanks) and none of the bichirs in either tank showed any symptoms.
Click to expand...

yes they can get ich, very rarely, but definitely possible.
O

I thought I was a little cooler than that
B

i think the most common is some torn fins or cloudy eyes thats all.

can get some spare melafix though
Expand signature

the most common desease of polypterids are Macrogyrodactylus polypteri - it's a parasite (wormlike) that is found often on new imported bichirs and ropefish from Africa. Under natural circumstances this parasite do not kill the polypterid, but under aquaristic circumstances is Macrogyrodactylus mostly lethal. The reason of this lethality could be found in a higher population under aquaristic terms and also in the absence of any enemies of this parasite.
Attacked polypterids often die from secundar infections caused by bacteria (bacteriosis). The parasite hurts the mucosa and also causes immunosuppression (to shelter itself). In Germany Macrogyrodactylus polypteri is the most common cause of death of polypterids.
The contraindication is a bit adventurous ... in some countries the most effective medication, FLUBENAZOL, isn't allowed. Normally this supplement is used for pigs!
The other medication, PRAZIQUANTEL, paralyzes the parasite - often enough there is a new breakout of the desease after months.
Due to the harsh original habitat Macrogyrodactylus polypteri is an artist of survival! So the methods of antagonizing are a much harder way as the procedure usually done to fight against Oodinium, Ichtyo and other parasites.
The medication that is successful to heal other deseases caused by parasites isn't successful to heal a decay of Macrogyrodactylus!!!

Hello everyone, I finally joined n have a first post! Sadly my post is about my new favorite fish. I noticed these spots on my poly, I've had him for maybe 3 months. Pretty much new to fish all together. I haven't seen any pics of common problems but I'm leanine toward a possible fungal problem. Would someone mind helping this n00b out? lol 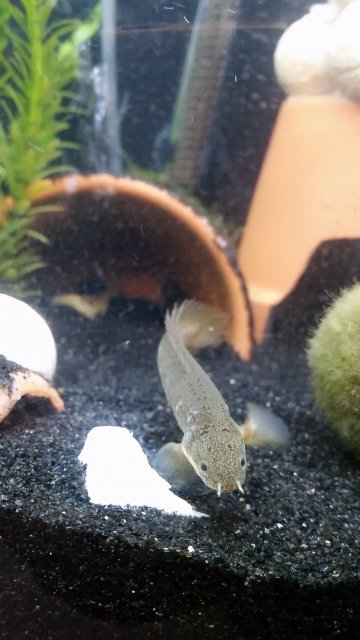