The following species are illegal to buy, sell, transport, or possess w/o a permit (issued for limited educational or scientific purposes):

NYC: The sale, purchase, or possession of Potamotrygonidae (FW stingrays), and all species of Piranha is illegal.

It is unlawful to take or possess any state or federally designated endangered, threatened,
or species of special concern, including sturgeon from the inland waters of North Carolina.

It is unlawful to possess eels less than 6 inches in length.

It is unlawful to possess, transport or release live alewife or blueback herring in the Little Tennessee River
and the Catawba River, upstream of Lake Rhodhiss, and their tributaries and impoundments.

It is unlawful to stock fish into public fishing waters without a permit from the Wildlife Resources Commission. 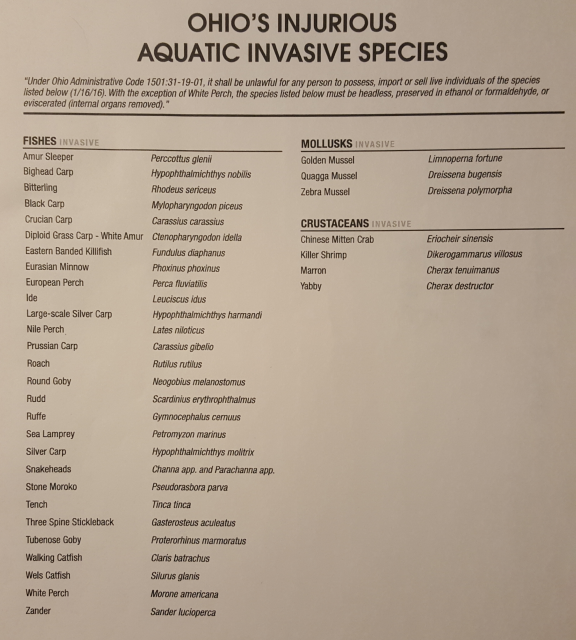 800:20-1-2. List of restricted exotic species
(a) Until such time as is necessary for the Department of Wildlife Conservation to obtain adequate information for the determination of other harmful or potentially harmful exotic species, the importation into the State and/or the possession of the following exotic fish or their eggs is prohibited:

(1) Walking Catfish: The Walking Catfish, (Clarius batrachus) and other members of the exotic catfish family Claridae, including but not limited to species of the genera Clarias, Heteropneustes, Gymnallables, Channallabes, and Heterobranchus are prohibited. Any live specimens of walking Catfish or other Claridae species within the boundaries of the State of Oklahoma are contraband and subject to seizure by the Department of Wildlife Conservation.

(B ) The following species shall be permitted by application and written letter of authorization from the Department of Wildlife Conservation for research purpose only:

(1) The sale and use of all Tilapia species as bait is prohibited.

(2) The stocking of all Tilapia species in any heated-water reservoir including Sooner, Konawa and Boomer Reservoirs is prohibited.

(3) This shall not interfere with the sale of dead and/or processed Tilapia for human food or the sale or transport of Tilapia species for the purpose of aquatic vegetation control in privately owned ponds.

Live specimens of the following fish species may not be imported, possessed, sold, purchased, exhanged, or transported in the state:

It is UNLAWFUL to possess, to introduce or import, transport, sell, purchase, offer for sale or barter the following live species in the Commonwealth: Snakehead (all species), Black Carp, Bighead Carp, Silver Carp, Zebra Mussel, Quagga Mussel, Round Goby and Tubenose Goby.

Aquatic nuisance species (ANS) are aquatic animals and plants that have been introduced into waterways in which they do not live naturally. They have harmful effects on the natural resources in these ecosystems and the human uses of these resources. Some other least-wanted ANS in Pennsylvania are European ruffe, sea lamprey, hydrilla, spiny water flea, purple loosestrife, Eurasian watermilfoil, Asian clam, and red-eared slider (turtle), Rusty Crayfish (Orconectes rusticus).

People are often the cause of ANS moving from one place to another. Help prevent the spread of ANS by doing the following:

? When retrieving your boat for the day, check your boat, motor and trailer for weeds and other items ?tagging along.?

? Wash your boat?s hull with hot water or with a high-pressure spray.

? Drain livewells, bilges and other compartments.

? Drain all standing water from the boat.

? Don?t dump leftover bait into the water you?re fishing, unless you collected the bait there.

Pennsylvania has laws for the propagation, stocking, transportation and importing of fish. See Chapter 71 of the Fish and Boat Code.

List of Fish. All aquarium trade fish may be kept without an exotic animal possession permit except endangered species. The Division of Fish and Wildlife may have additional regulations if the species of fish is considered to be native or nuisance. Possession of the following species requires an exotic animal possession permit:
1. Grass Carp or White Amur (Ctenopharyngdon idella)
2. Piranha (Pygocentrus spp.and Serrasalmus spp.)
3. Rudd (Scardinius erythrophthalmus)
4. Walking Catfish (Clarias spp and all members of the family Clariidae)
5. Snakeheads (Channidae and Parachannidae)

Best of luck in obtaining a permit:

REQUIREMENTS
1. A permit to import into, receive, or possess in this state animals defined as exotic animals under section 4.7 herein, shall be restricted to the United States Department of Agriculture (USDA) and the American Association of Zoological Parks and Aquariums (AAZPA) approved zoos and research institutes or other USDA approved facilities as well as exhibitors and private persons seeking to import or possess an exotic animal for private ownership pursuant to the provisions of sections 4-18-3 and 4-18-6 of the Rhode Island General Law, 1956, as amended herein. Obtaining such permit does not preclude conformance with such other Federal, State, or Local requirements for licensure certification or permit which may be required.

2. No other person shall be allowed to import, receive, or possess any animals defined as exotic animals under section 4.7 herein, other than USDA/AAZPA approved zoos and research institutes, or as well as exhibitors and private persons seeking to import or possess an exotic animal.

1. Issuance of exotic animal import permits may be made by the Department upon the following: a) Receipt of written application providing all of the information enumerated in RULE 5 not less than seven (7) days preceding the probable day of shipment of the animal(s). b) Completion of an inspection by the department of the quarantine and final enclosures as enumerated in RULE 5 and approval of those enclosures. c) Payment of the necessary permit fee as required under Rhode Island General Law 4-18-8. d) Determination that possession of the exotic species will not endanger the public health or the health of native wildlife or domestic animals to an extent greater than possession of domestic animals or exempt exotic animals would. e) Approval of the probable point of first entry into the state of Rhode Island f) Receipt and approval by the State Veterinarian of a Health Certificate signed and issued within thirty (30) days of the anticipated arrival of the exotic animal. Such Health Certificate must be issued by a Federally Accredited Veterinarian licensed in the state of origin of the exotic animal(s), be countersigned by the State Veterinarian of the state of origin, and be accompanied by any test records determined to be necessary by the Department. The Health Certificate must state that the animals are free from signs of infectious, contagious, and zoonotic diseases in addition to the specific required tests.

2. The permit may, at the discretion of the Director, list specific conditions that must be met and maintained prior to issuance of an exotic animal possession permit.

3. The exotic animal possession permit is not transferable to another person or location without the expressed written permission to do so from the Director.

5. Any modification of the enclosure must be inspected and approved before the permitted animal(s) are allowed to be housed within.

6. Any exotic animal as permitted shall not be used for breeding purposes without prior approval by the Department. If approval is granted, limits may be imposed as to the number of exotic animals allowed per location, enclosure, or person as in

7. The possessor of any permitted exotic animal must notify the Department within twenty-four (24) hours of the death of that animal, and immediately upon the escape of that animal. 7

8. The exotic animal and the enclosure are subject to periodic inspection by representatives of the Department during normal business hours and without prior notice.

9. The Director may order immediate examination and testing of any permitted exotic animal(s) upon suspicion that the animal(s) may be harboring a disease that threatens public health or the health of domestic animals or native wildlife. Measures necessary to do so may include but not be limited to quarantine, seizure, euthanasia, and post-mortem examination.

10. Any person bitten, scratched or otherwise injured by an exotic animal must be immediately reported to the Animal Control Officer in the municipality where the animal is housed and to the State Veterinarian.

11. The release into the wild of any animal for which an exotic animal possession permit has been issued is prohibited whether or not such release was intentional or accidental.

12. Any animal imported with an exotic animal possession permit may, at the discretion of the Director, in accordance with RIGL 4-18-11, be required to undergo a period of quarantine. The terms of the quarantine will be established on a case-by-case basis.
Expand signature
http://www.monsterfishkeepers.com/forums/showthread.php?t=51703
Custodis Piscis Eterna - Eternal Fishkeeper
Carpe Piscis Extrarius - Seize the Oddball fish.
Ad Mortem BOHICA

(A) A person may not possess, sell, offer for sale, import, bring, or cause to be brought or imported into this State or release into the waters of this State the following fish or eggs of the fish:

(10) snakehead (all members of family Channidae).

(B) The department may issue special import permits to qualified persons for research and education only.

(C) The department may issue special permits for the stocking of nonreproducing white amur or grass carp hybrids in the waters of this State.

(D) It is unlawful to take grass carp from waters stocked as permitted by this section. Grass carp caught must be returned to the water from which it was taken immediately.

(E) The department must prescribe the qualifications, methods, controls, and restrictions required of a person or his agent to whom a special permit is issued. The department must condition all permits issued under this section to safeguard public safety and welfare and prevent the introduction into the wild or release of nonnative species of fish or other organisms into the waters of this State. The department may promulgate regulations necessary to effectuate this section and specifically to prohibit additional species of fish from being imported, possessed, or sold in this State when the department determines the species of fish are potentially dangerous.
Expand signature
http://www.monsterfishkeepers.com/forums/showthread.php?t=51703
Custodis Piscis Eterna - Eternal Fishkeeper
Carpe Piscis Extrarius - Seize the Oddball fish.
Ad Mortem BOHICA

SOUTH DAKOTA:
Currently the only species of fish prohibited in South Dakota is snakehead fish.
Permission is required to import or stock public waters with fish species
non-native to South Dakota . Permission to import any fish except fathead
minnows, creek chubs, white suckers, or golden shiners, is required.

Having said that, South Dakota does not regulate sale and possession of aquarium
fish. If aquarium fish are released into waters of the state they then would be
regulated.

In order to manage and conserve our natural resources, Texas Parks and Wildlife Department must protect our state waters against the introduction of non-native aquatic species. Fish, shellfish, and aquatic plants that are not native to Texas may compete with native animals and plants for food and space.

The organisms listed on this page are legally classified as exotic, harmful, or potentially harmful. No person may import, possess, sell, or place them into water of this state except as authorized by rule or permit issued by the department. For more information, contact Joedy Gray, (512) 389-8037.

From the Utah Department of Natural Resources regulations:

(1) All species of fish listed in Subsections (2) through (30) are classified as prohibited for collection, importation and possession, except:

a- Koi, Cyprinidae Family (Cyprinus carpio) is prohibited for collection, and noncontrolled for importation and possession;

b- all species and subspecies of ornamental fish not listed in Subsections (2) through (30) are classified as prohibited for collection, and noncontrolled for importation and possession; and

c- all species and subspecies of non-ornamental fish not listed in Subsections (2) through (30) are classified as prohibited for collection, and controlled for importation and possession.

(2) Carp, including hybrids, Cyprinidae Family, (All species, except Koi).