I am in the process of selecting a stock list for my 125 gallon tank as sadly my Oscar just died. I currently have a Fluval FX5 for filtration and in the tank a Rhino/Chocolate Pleco and a Raphael Catfish that are both grown leftover from the previous stock list. I am bouncing the idea of 2 stock lists but have never kept much besides dither fish in my 40 gallon and the Oscar with a Salvini, catlfish, and pleco, in the 125 gallon, all easy fish to care for. I know each fish has their own personality that can very from the norm but I would greatly appreciate any feedback or experience. Critiques on my list being viable or not in my 125 gallon tank either for bio load or aggression issues will be very welcome as this will be their permanent home. I am also open to suggestions so please feel free. My goal is to have 1-2 larger cichlids that are bright/colorful as the centerpiece(s) and my intent is to get them as juveniles and grow them up together. For maintenance I do %25 water changes every 2 weeks with filter cleaning/pad changing and %50+ every 3 months or as needed testing my water bi-weekly.

List 1:
-EBJD
But I’ve heard these are very fragile and hard to get to survive past the juvenile stage, any truth to that?
-Chocolate Cichlid
-Chocolate Pleco
-Raphael Catfish
-Denison Barbs or something similar

I can’t give you any advise on your stocking choices.

But....with a water change schedule like yours, I would stick to a lighter stock list. If that was my schedule and tank I woul stock it like it was a 75g tank.
Reactions: jaws7777, tlindsey, Bertie07 and 1 other person

I agree with the light stocking if you stick with that water change schedule.
Reactions: tlindsey and Bertie07

For any of the stock lists you have suggested you need to be doing 60 to 70% waterchanges weekly. Personally I would stick to a pair of one species out the second list. I don't know much about ebjd but I wouldn't mix them with a South American species like chocolates.
Reactions: CrazyPhishMan, Zachk29, tlindsey and 1 other person

If you want a colourful cichlid you might consider a synspilum for the tank, maybe with a pair or hrp.
As above tho around 75% pw will be needed as he grows.
Like most cichlids they are drab as baby's but become stunning as they reach adulthood... 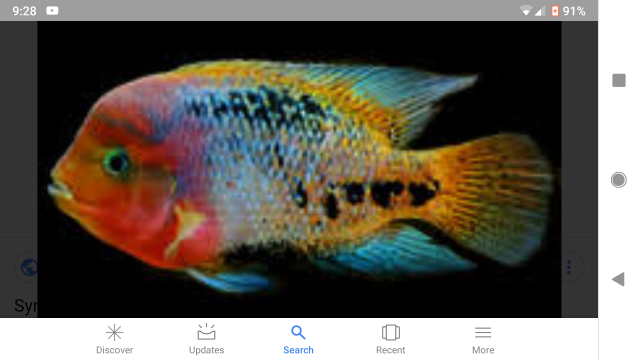 Expand signature
hemichromis, parachromis, hemibagrus, batrochoglanis, paratheraps, amphilophus ect ect...
All in my head but I cant remember who was in the film I watched yesterday!-)
Reactions: Beardogg85, jaws7777, dan518 and 2 others
U

Thanks guys, I don’t mind upping the maintenance that was just what I had been doing prior with the 3 fish in it (Oscar, catfish, Pleco). With 2 large cichlids, if I go that route, upping the maintenance makes sense. Or if it’s just not tennable in a 125 I’ll have to rethink the stock list and just have a single center piece like before.

Justarn, thanks for the image that is a beautiful fish, I am going to check it out.

One thing I will say is that 2 cichlids, unless a bonded pair, has never worked out for me. Probably better off going with 3 at least. With two, usually one becomes dominant and bullies the crap out of the subdominant guy, since there are no other fish to distract him. With 3 or 4 cichlids in the tank, the aggression will be distributed more evenly, and the subdom guy won't get picked to death (hopefully).

I think your first list is more likely to work out; I would add perhaps a red shoulder severum.

Second list, problem I see would be with addition of a jaguar or similar CA cichlid; an adult male jag probably won't share a 125 with those other fish. If you were to do the female festae with a GT I think it could work out; personally would still add one more cichlid, and leave out the silver dollars. THey make a lot of waste, and they are dither, not target fish; they help bring shy fish out, but don't do much to curb cichlid aggression, cichlids know they are not cichlids and thus they don't take a spot on the "pecking order"
Expand signature
POTM and TOTM 2019 Contest Info: Click Here

Ok so the dither fish don’t serve as a distraction, thank you. What in the medium/small size cichlid “could” work with a festae, would a Convict be robust enough to stand its ground? I’m trying to avoid a pair of anything because I don’t want to breed. If I revised the second list to something like:
-Female Festae
-GT
-HRP or Convict (or any suggestions)

Would that make more sense or just ditch the GT altogether and focus on the Festae as the only large cichlid with a different supporting cast?

Sorry for all the questions, the Oscar was easy to build around especially with the personality he had, he was very very passive, and my only real fish experience. The Festae is just a beautiful fish but I know they are tricky with being so aggressive. Them and the EBJD just really catch my fancy.

Depends on the festae; none of us will really be able to tell you "this will definitely work" etc, because each fish is different. HRP might be a good choice, although they generally prefer a bit harder water being from CA, wheras the festae and GT prefer neutral-lower. Although all these fish are adaptable to other water chemistry.

You kind of have to give it a shot, get the fish small and grow them up together and hope for the best; be prepared to switch things around with another tank on standby ora place to donate fish that aren't working out. Cichlid communities hardly ever work out exactly how you want them to; you will probably have to switch it up until you get a balance that seems to work
Expand signature
POTM and TOTM 2019 Contest Info: Click Here